August 24 2019
57
In Kiev, they decided to withdraw units of the National Guard from the territory of Donbass. From 2020 of the year in the area of ​​the Operation of the Joint Forces (OOS, the former ATO), only operational units and separate special forces and intelligence units will remain. This was reported by Ukrainian media. 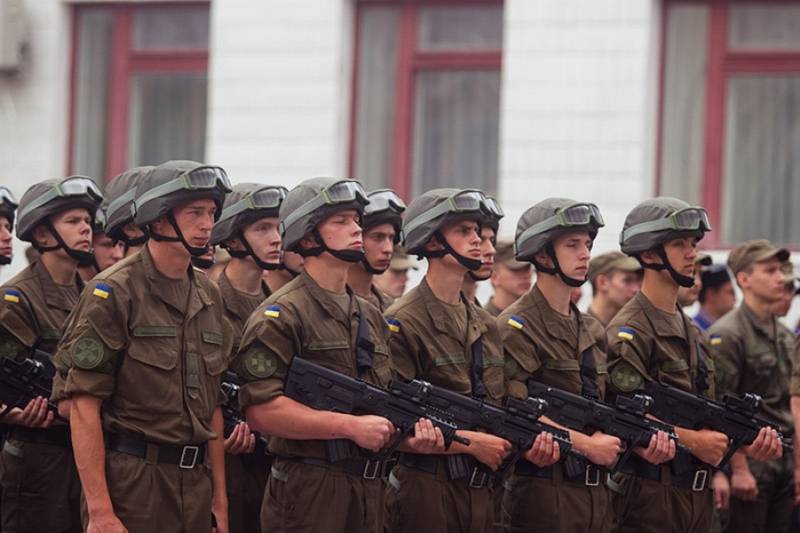 One of the problematic issues is the involvement of the National Guard under the protection of public order. To resolve this issue, from the beginning of the 2020 year, exclusively operational units and separate special forces and intelligence units will be involved in military and military-service missions in the area of ​​the CAB.
- Balan told reporters. adding that all units of the National Guard for the protection of public order, escort, extradition and protection of the defendants will be withdrawn to permanent deployment points to perform tasks as intended.

It should be noted that since August 1 of this year, the National Guard of Ukraine was attracted to patrolling Ukrainian cities along with the National Police.

Meanwhile, according to some Ukrainian media, the Minister of Internal Affairs of Ukraine Arsen Avakov, who has created an almost personal army from his ministry in five years (the National Guard is also a member of the Ministry of Internal Affairs - approx. VO), may leave this post and take the chair of the Secretary of the Council for National Defense and Security of Ukraine (NSDC).

It is alleged that in this way, the current president of Ukraine Zelensky will thank Avakov for "neutrality" in the presidential election. Although Zelensky is grateful to Avakov, he cannot leave him at the helm of one of the key ministries of the state. It’s just whether Avakov himself will agree to change the minister’s chair with considerable force behind him to a higher, but not covered, chair of the NSDC secretary, it’s not entirely clear yet.