"Nagmashot" and others. Israeli armored personnel carriers on tank chassis

August 29 2019
18
In the past, the Israel Defense Forces had a significant amount tanks "Shot" - British Centurion. By the beginning of the eighties, the combat qualities of such equipment ceased to fully meet the requirements. In this regard, it was decided to rebuild the tanks in other vehicles. The first result of this project was the heavy Nagmashot armored personnel carrier. Then, a number of samples for various purposes were created on its basis. 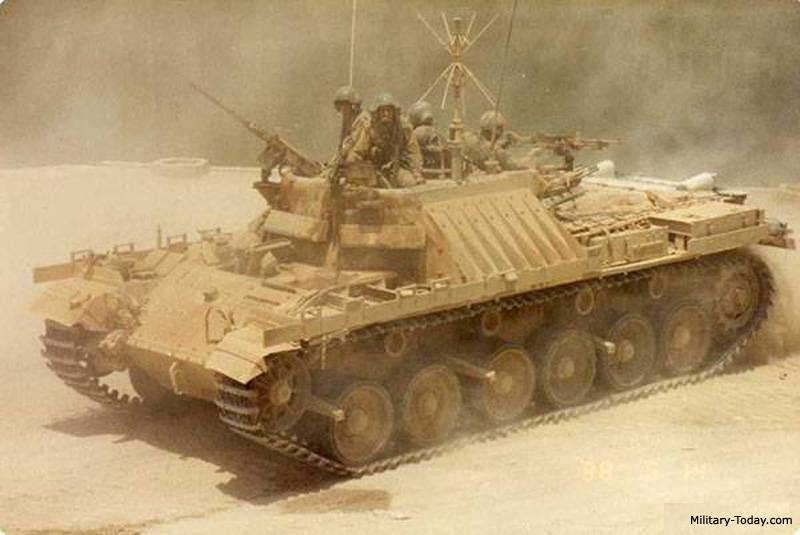 "Nagmashot" and other armored personnel carriers

The Nagmashot project involved the removal of the tower and the liberation of the central part of the tank hull. The hull was equipped with a new armored superstructure with sight gauges, arms mounts, etc. Inside the former tank, an airborne squad was organized with eight seats. Own reservation and attachments ensured protection against small arms weapons and some anti-tank systems. Own weapons could include several machine guns in open installations.

Armored personnel carriers "Nagmashot" were used in several operations and generally confirmed the correctness of the basic concept. However, the need for improvements was shown. In the late eighties, the Nagmakhon armored personnel carrier appeared, distinguished by the composition of the defense. The safety of the crew and the landing was increased due to the newer dynamic protection and additional reservation of the bottom. 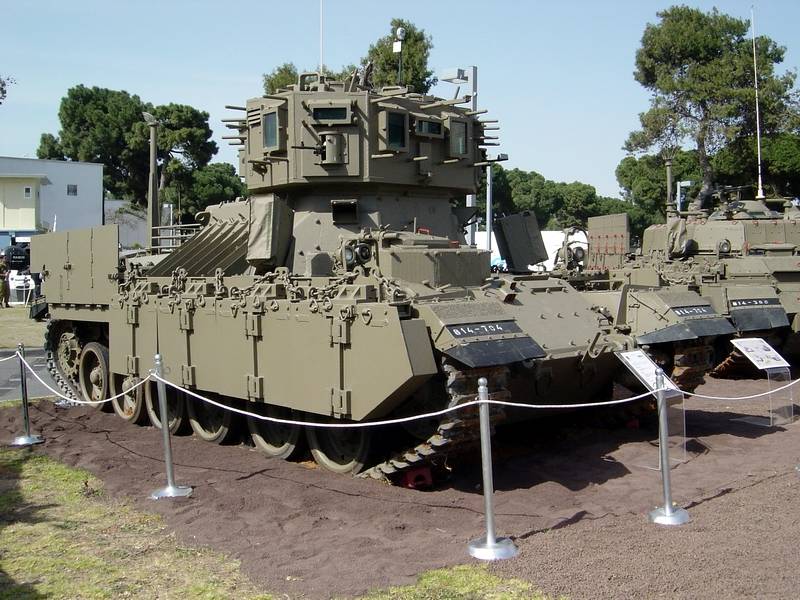 "Nachmagon-Kasman" with a characteristic superstructure. On the superstructure, support rods for lattice screens are visible. Wikimedia Commons Photos

"Nagmakhon" became the basis for two modifications. BTR "Nagmakhon-Kasman" was equipped with a new cabin. It was made in the form of a high superstructure with glazing and four machine gun installations around the perimeter. The cabin did not have open areas, which allowed the use of armored personnel carriers in the city.

In the early nineties appeared armored car "Nakpadon" for a similar purpose. While maintaining the chassis and the main features of the layout, it was distinguished by a different composition of protection. For her, a new version of the closed cabin was developed. Frontal and side projection covered with a new multilayer dynamic protection. The rear of the side screens with DZ was raised and provided protection for the landing. It was alleged that the Nakpadon could withstand the shelling of the RPG-7. 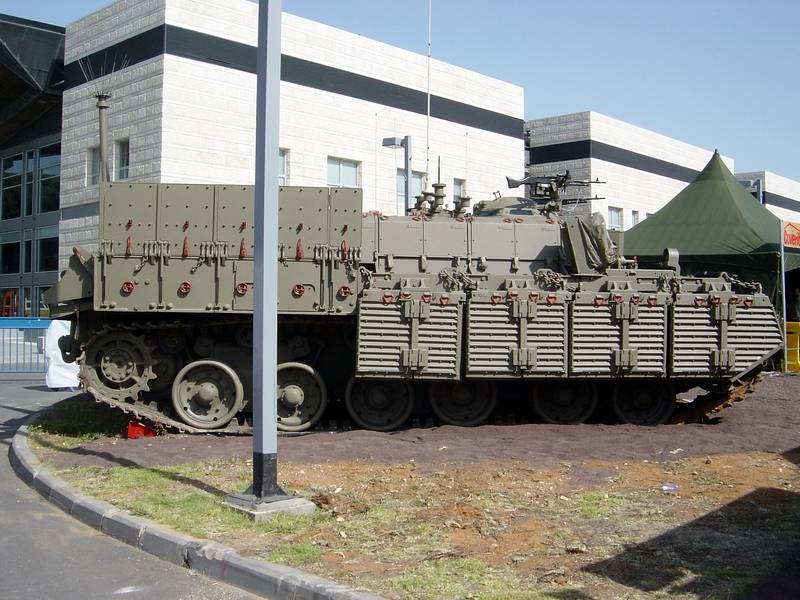 As it exploited, the industry carried out the modernization of technology in one way or another. The composition of equipment and weapons was changing. Additional remedies also appeared. So, in the Nagmakhon project, electronic warfare tools were introduced to suppress the control channels of explosive devices. At the same time, the C1-3030 instantaneous smoke curtain system was introduced.

"Nagmashot" and other samples based on the "Shot" tank participated in all major operations and conflicts, starting from 1982-83. In general, such a technique showed itself well and coped with the tasks. Heavy armored personnel carriers showed all their advantages over equipment of a similar purpose, which has less powerful protection.

In the early nineties on the platform "Nagmashot" developed a promising multi-purpose engineering machine "Puma" - the name was formed by abbreviation of the Israeli term IMR. During the development of the project, the chassis of the base tank was changed; it was improved using developments on the latest MBT projects. Otherwise, Puma was as similar as possible to previous developments. The armored cabin was again used to protect the crew, machine gun installations, various protective equipment, etc. 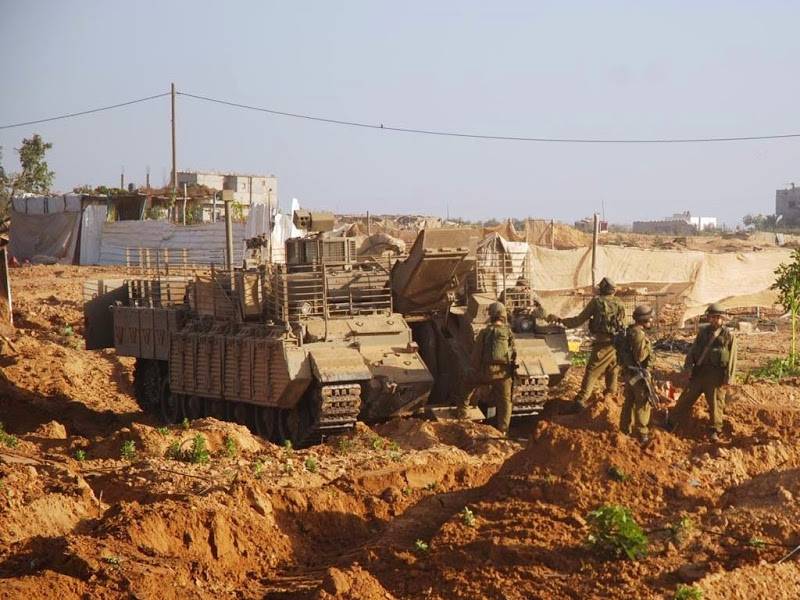 To solve engineering problems, Puma can use additional equipment of various types. EW tools are used to suppress control channels or mine explosions, mounted trawls and the Karpet remote mine clearance system with special ammunition for volumetric explosion.

Especially for special-purpose engineering units, a variant of the existing armored vehicle called the Nakpadon Pylon was developed. The design of a frontal reservation differs from the basic sample of such an armored personnel carrier. The right side of the forehead in front of the driver's seat remained the same, while the left became a large liftable hatch. Using this hatch, the crew gets more convenient access to objects in front of the machine, which simplifies the solution of engineering problems.

A chassis with tank armor can be used as a carrier of one or another equipment for solving special problems. An interesting example of this approach is the Nagmapop reconnaissance vehicle. One of its main elements is the optical-electronic complex IAI POP, which is reflected in the title.

A telescopic mast with target equipment is mounted on the roof of an armored vehicle of this type. Using a mast to a height of not less than 25-30 m, the POP or Keshet radar-optical equipment unit is raised. Inside the protected compartment are control devices for such equipment. Calculation of the Nagmapop machine monitors the surrounding area and should provide data on the targets found. The range of the complex in open space is tens of kilometers. 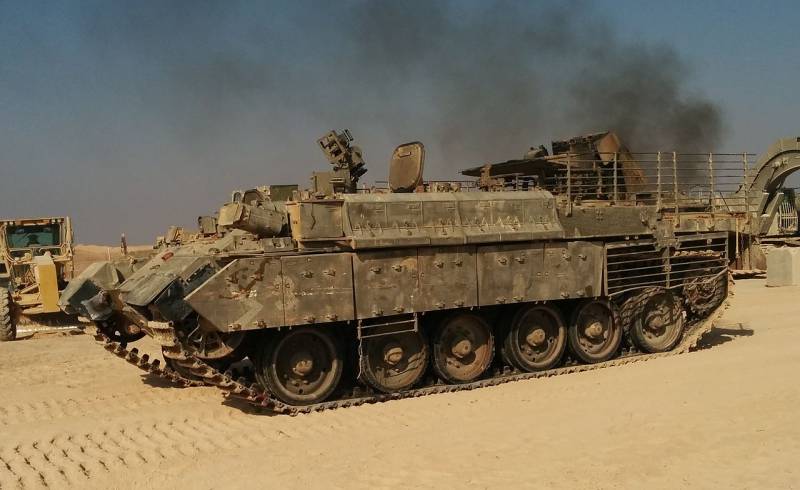 According to various sources, the Nagmapop serial samples appeared at the beginning of the 2000s. Due to the special role, such a technique was not required in large quantities. Probably only a few cars were built, then distributed between different parts of the IDF.

AOI received the first Centurion / Shot tanks at the very end of the fifties. The last batch of British technology arrived at 1973. In total, approx. 1100 armored vehicles in the original configuration. Tanks had to participate in all the major conflicts of that time; their opponents were mainly Soviet-made armored vehicles.

By the beginning of the eighties, the Shot tanks of all major modifications had become obsolete. This problem was solved by repair and modernization, but in the long term, such equipment would have to be abandoned. It was then that the idea of ​​rebuilding tanks into the equipment of other classes appeared - first of all, into heavy armored personnel carriers. 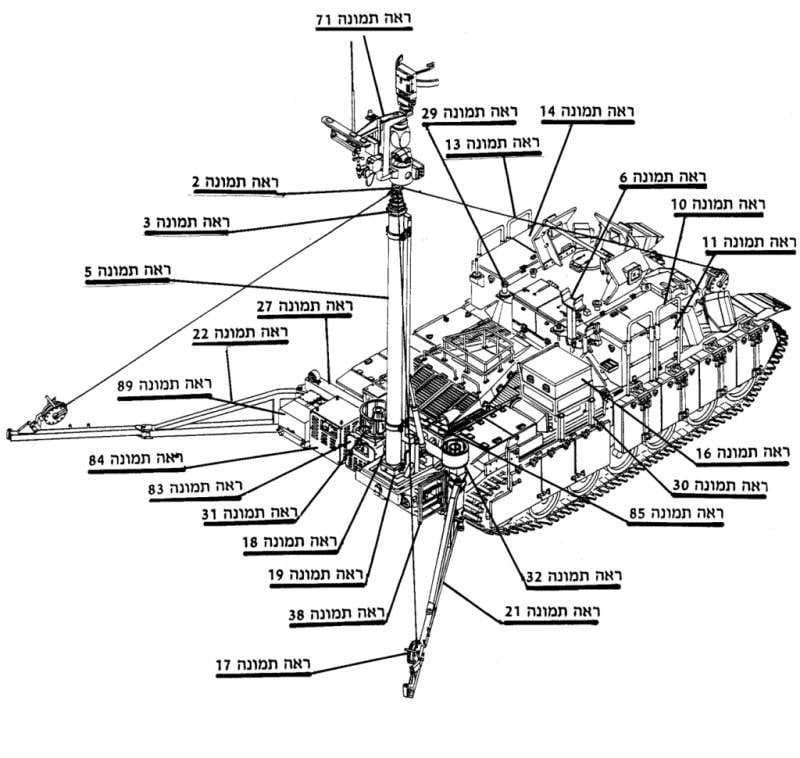 In the new role, the outdated chassis proved to be the best. The Centurion’s defense was inadequate in the fight against tanks, but it allowed a sharp increase in infantry safety. In addition, there was an opportunity to save on purchases of completely new equipment.

Using this approach, since the beginning of the eighties, Israel has created a number of armored vehicles for various purposes. At first, the BTR and other vehicles were built on the basis of the Shot tank, and almost simultaneously with them appeared equipment based on the captured T-55. In the past decade, modern Israeli-made tanks have become the basis for similar designs.

According to various sources, now in the AOI fleet there are several hundred heavy armored personnel carriers and similar vehicles of other types. At the end of the last decade, a new BTR "Namer" was built, built on the chassis of the Merkava tank. Due to mass production, he soon became the main example of his class in the army. Nevertheless, the operation of older machines based on the Shota is still ongoing. Apparently, they will be used until the final development of the resource.