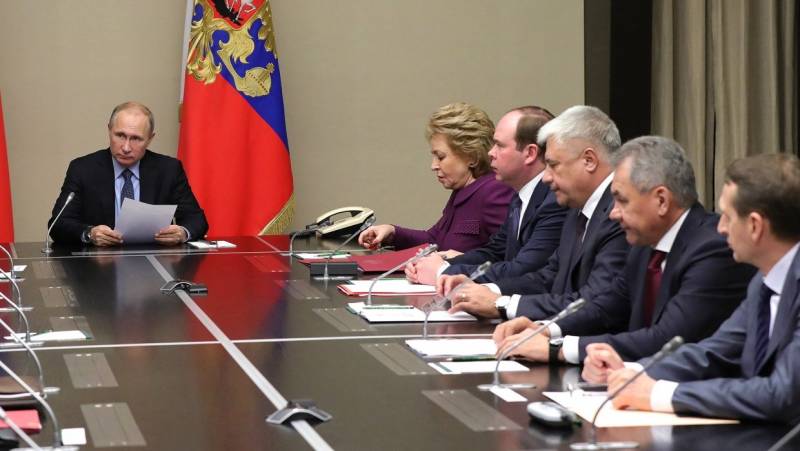 Vladimir Putin held a meeting with members of the Russian Security Council on recent US missile tests. Earlier, the Americans unilaterally withdrew from the Treaty on intermediate and shorter-range missiles. Moreover, there is evidence that the States were preparing to sabotage the agreement in advance by developing missiles prohibited to them.

Now, on 18 of August, in the USA they tested a ground-based cruise missile, which supposedly hit a target at a distance of 500 kilometers. In addition, the US military used the MK-41 universal launcher for testing. Exactly the same installations are located in US missile defense systems in eastern Europe.

This is overt pressure on our country. A kind of blackmail and at the same time a signal to agents of American influence within Russia. Say, we expect results from you - we are ready to strike from missile defense bases in Europe at the right time.

An additional element in this mosaic is the accident of a Russian nuclear-powered hypersonic missile near Severodvinsk. Many experts are sure that it was sabotage. The reaction of American officials confirms this version. They jumped straight out of their pants to inflict reputation on the Russian military-industrial complex. And against this background, they conducted their missile tests.

Again, it looks like a signal to “sleeping”: Russian missiles will not take off, and ours are ready and are waiting for a signal at the borders of Russia.

It is important not to lose sight of the fact that now there is an investigation of foreign interference at the state level in the upcoming elections in September. In July and August, illegal actions periodically erupted in the capital, which grew into riots. Some experts believe that these actions are just training before really large-scale riots in Moscow.

Given all of the above factors, “Western partners” need to give a clear and unambiguous answer to their actions. According to Vladimir Putin, preparing a symmetrical answer. The relevant orders were given to the members of the Security Council of Russia (“take comprehensive measures to prepare a symmetrical response”).

Now we can only speculate on specific orders of a "symmetrical response." However, it certainly will not do without “preemptive” military exercises with the use of the most modern weapons, as well as asphyxiating measures for foreign agents of influence within Russia.