Operation "Sturgeon Fishing". To the 70 anniversary of the fall of Sevastopol 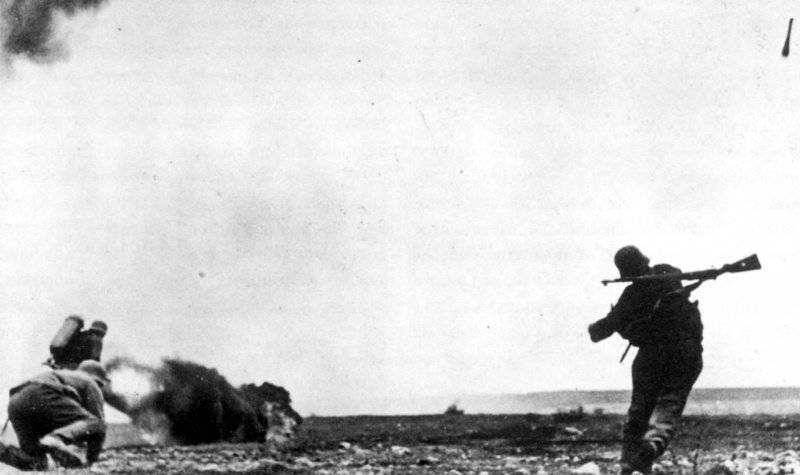 7 June 1942, the last assault on Sevastopol began. By June 17, after fierce fighting, the German troops were able to turn the tide in their favor. In the southern sector, the Germans captured the so-called. "Eagle's nest" and went to the foot of Sapun Mountain. In the northern sector, the enemy captured the fort "Stalin" and the foot of the Mekenziev Heights. On the same day, several more fortifications fell. As a result, German artillery could fire on the North Bay, and the supply of reinforcements and supplies was impossible. However, the inner ring of defense was still holding, and the decision to evacuate the command and political staff of the Maritime Army was made by the end of June — by that time ammunition had run out of defenders of Sevastopol. After the evacuation of the commanding staff, individual pockets of resistance held until July 9-10.

In the post-war period, the defense of Sevastopol became for many an ideal example of a passive, defensive strategy. It was believed that with a normal supply and advance preparation of Sevastopol (and Odessa) for a siege, this city could continue to hold on, hindering significant enemy forces. However, this is an erroneous view, exaggerating the possibilities of defense and not fully taking into account the offensive potential of the enemy. The experience of the First and Second World Wars proved that any defense and fortified lines sooner or later yield to the attacking side. The position of an isolated fortress (fort, dota, etc.) with an unstable supply is very precarious. The armies of the first half of the 20 century had a mass of tools for breaking into the most powerful defense: assault groups, sapper units, bombers and attack planes, heavy guns, etc. The enemy had the opportunity to gather superior forces into a fist and crush the defense system. The fall of the fortress was only a matter of time. As a result, the defensive side in a short time lost significant strength of the garrison. In most cases, the garrison did not have the physical ability to retreat, or only part of the forces could be taken out.

Sevastopol lasted so long (250 days) primarily because the 11th German army under the command of Erich von Manstein constantly faced strong external pressure. In September 1941, the advance of the Southern Front near Melitopol prevented the appearance of the German selected infantry on the Crimean Peninsula in the person of the 49th mountain corps of Ludwig Kübler. In December 1941, the assault on the base of the Black Sea fleet was interrupted by the Kerch-Feodosia landing operation. In winter and spring of 1942, the main forces of the 11th Army fought the advancing Crimean Front. It was the task of keeping Sevastopol that forced the commander of the Crimean Front, Dmitry Timofeevich Kozlov, to exert constant pressure on the 11th army. Only after the Crimean Front was defeated by May 19, and the possibilities of external influence on Manstein’s army were exhausted, the Germans were able to concentrate their forces to liquidate the garrison of Sevastopol. The fall of the city has become a matter of time. After the Kerch Peninsula was cleared of Soviet troops, the 30th Army Corps began to be transferred to Sevastopol.

While the army of Manstein was engaged in fighting the Crimean front, the garrison of Sevastopol took advantage of the respite to improve their positions. In January-March 1942 of the year, the forces of the Sevastopol Defensive Area (SORA) in some areas of the front threw the Germans back and took up the points and positions left in November-December of 1941. Thus, in the 4 sector, the Soviet troops repulsed the northern slopes of the Mekenziyev heights and advanced to the Kamyshly-Balbek line — the height of 79,4. As a result, the Germans lost convenient observation points on the north-eastern approaches to the city.

In addition, a pause in active hostilities allowed to accumulate forces and means. During the period from January 1 to June 1, the Black Sea Fleet ships and transport ships delivered thousands of tons of various cargoes to 1942, mainly ammunition and foodstuffs. The return flights were the evacuation of the civilian population and the wounded. At the same time, during the winter-spring of 77,5, the compounds of the COP obtained 1942 marching companies of a total of 34 thous. Fighters. They also transferred significant connections: the 12 th rifle division and the 386 brigade of marines were sent to the city. There was also a reorganization of the garrison. From the arrived divisions and separate parts of the Sevastopol garrison, the 79-I infantry division was formed.

By the end of May 1942, the troops defending Sevastopol were united in the Primorsky Army under the command of Major General Ivan Efimovich Petrov. The chief of staff was N.I.Krylov. The army included 7 rifle divisions, 4 rifle brigades, several units of the marines, 2 tank battalion (38 T-26 tanks) and 1 armored train. The artillery consisted of 7 divisional artillery regiments, 3 army artillery regiments, 1 army mortar division and 1 guards mortar division (12 M-8 rocket launchers). In total, the army had about 120 thousand people, 50-100 aircraft, 606 army and coastal artillery guns, 1060-1770 mortars (data sources differ). The provision of guns and mortars with ammunition was for different calibers from 2 to 7 ammunition. There was a significant shortage of mines.

The perimeter of the defense of the city was divided into four sectors. The first sector from Balaclava to the Black River (area in 7,5 km) was defended by the 109-I and 388-I divisions. The second sector from the Black River to Mekenzia (front - 12 km) was defended by units of the 386 th rifle division, 7 th and 8 brigade of marines. The third sector of the SORA from Mekenia to the Belbek River (8,5 km front section) was held by units of the 25 Rifle Division, 79-I Navy Rifle Brigade, 2-th and 3-th Marine Regiment. Protection of the fourth sector (front - 6 km) was assigned to the troops of the 95 and 172 of the rifle divisions. The reserve was the 345-rifle division, one rifle regiment, two tank battalions and the Zheleznyakov armored train. 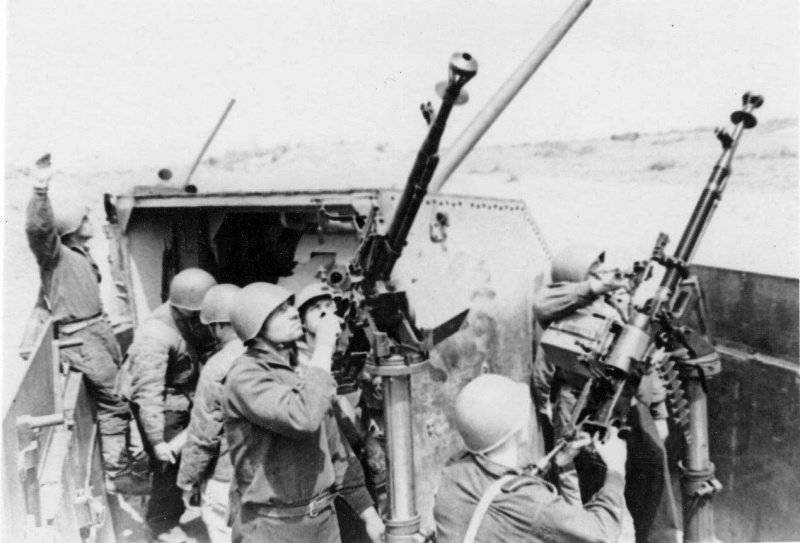 Forces of the enemy

The destruction and ousting of the troops of the Crimean Front gave Manstein some freedom of action. To guard the Kerch Peninsula, he left two infantry and one cavalry Romanian divisions, the 46 German infantry division, and the Grodek motorized brigade. After the operation “Hunting a Bustard” (operation of the 11 Army of the Wehrmacht against the Crimean Front of the Red Army), the main forces of the 22 Panzer Division were transferred to the Donbass, but one battalion was left to support the infantry. Also, two battalions of assault guns took part in the last assault on Sevastopol. The LIVth Army Corps (20, 24, 50 and 132 Infantry Divisions), XXX Corps (28-th Chasseurs, 72-I and 170-I Infantry Divisions) participated in the operation to capture Sevastopol, Romanian Mountain Rifle Corps (1-I and 4-I Mountain Division, 18-I Infantry Division). All in all, Manstein had over 200 thousand people.

If in the liquidation operation of the Soviet Crimean Front the 22-I tank division was the strongest argument of Manstein, then heavy artillery played the most important role in the storming of Sevastopol. The most powerful tools of the Third Reich were brought to Sevastopol: the super-heavy 420-mm howitzer “Gamma” (Gamma Mörser), the 600-mm mortars “One” and “Thor”, and the heavy howitzers 300 and 350 mm were used. Near Sevastopol, for the first time, the unique superheavy railway 1350-ton and 807-mm Dora gun was used. This gun served and guarded up to 4 thousand people. In total, Manstein had 80 heavy and super heavy batteries, 60 light and 24 rocket mortar batteries (approximately, 670 field and siege guns, 655 anti-tank guns, 720 mortars). The rocket launcher batteries were combined into the 1 heavy rocket launcher regiment (21 battery with 576 launchers of the 280-320 caliber mm), 7-y regiment and 1-nd and 4 battalions of the rocket launchers. 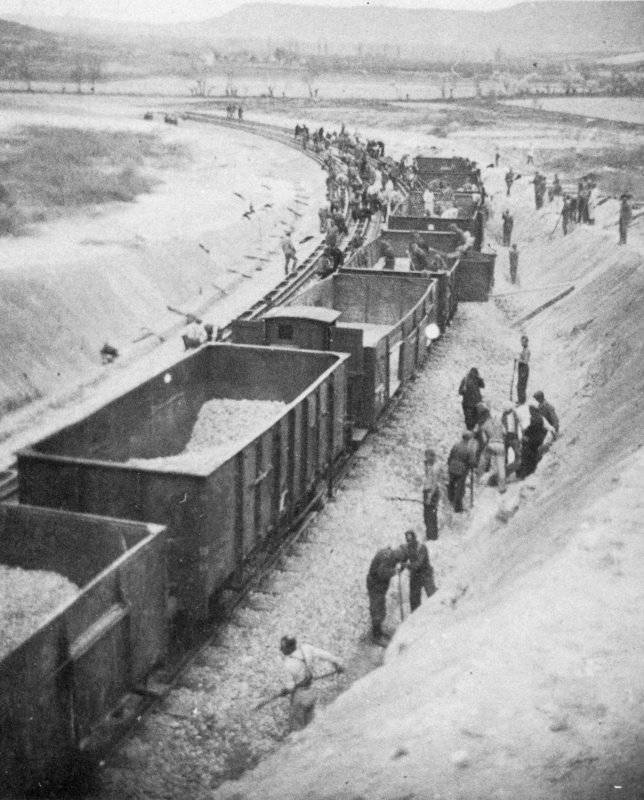 Construction of a firing position for the German super-heavy 800-mm gun "Dora" near Bakhchisarai. For the firing position of a giant 1350-ton gun, dual railway tracks were required with two additional branches for mounting cranes. For engineering position training, 1000 deminers and 1500 workers, mobilized from among local residents, were assigned. 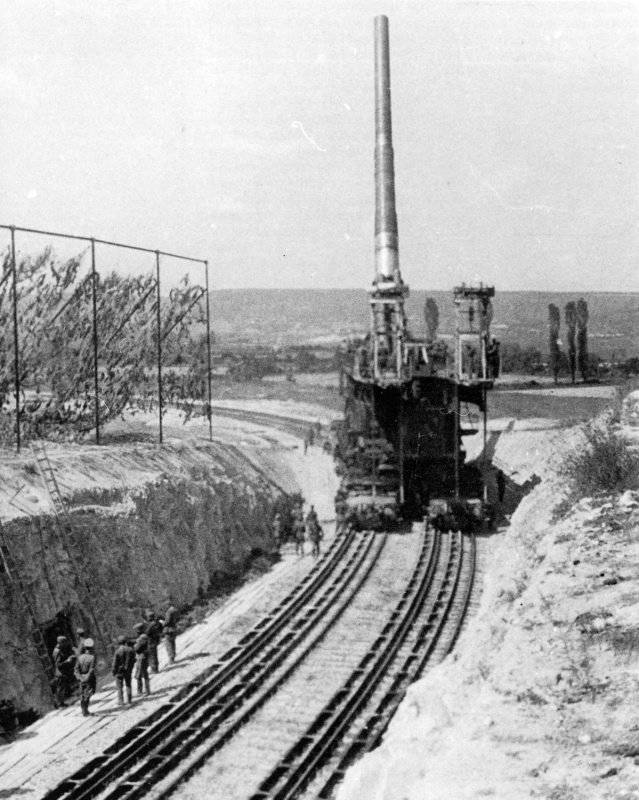 In addition, for the decisive assault on the city, the 8th was returned to Crimea aviation corps under the command of Wolfram von Richthofen. Manstein had up to 1000 aircraft under his command, the city was subjected to massive bombardments: on average, German air force planes flew 600 sorties a day. About 2,5 thousand tons of high-explosive bombs, including large-caliber ones, were dropped on Sevastopol. The actions of artillery and aviation, combined with the tactics of assault groups, inevitably led to a slow but sure hacking of the city’s defense system. The operation to capture the city received the code name "Sturgeon Fishing". 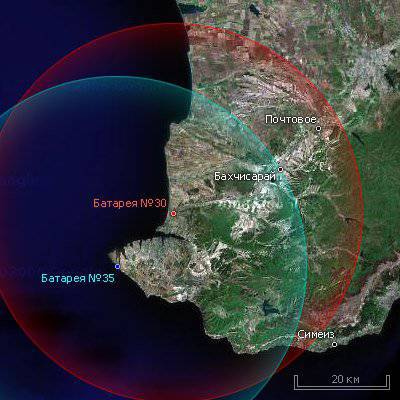 As early as May 20, the day after the completion of the operation to defeat the Crimean Front, the Germans began a preparatory artillery shelling of the Soviet positions. 2 June 1942 began full artillery and aviation training. She lasted five days. The Germans could afford such a long preparation. If at the front a long artillery preparation indicated the probable place of a front breakthrough and the defending side could transfer additional forces to this area, then the command of the Sevastopol garrison did not have such an opportunity. The defenders under the bombs and shells of the enemy could only, to the best of their ability, restore the destroyed defense.

The main purpose of the German heavy artillery during this period was the 30-i coastal battery with four 305-mm guns (armored battery-30 or fort "Maxim Gorky-1"). It must be said that the largest weapons that defenders of Sevastopol could oppose to the enemy were 4 revolving armored towers with two 305-mm guns in each (as part of the 30 and 35-th coastal batteries). The battery-30 was located near the village of Lyubimovka, at the mouth of the r. Belbek, and the battery-35 (German designation - the fort "Maxim Gorky 2") - in the vicinity of Cape Chersonese. The dominance over the surrounding territory provided the round-robin armored towers, they were turned to 360 degrees. The maximum range of firing guns was up to 42 kilometers. Both batteries were originally built as coastal, i.e. they were designed to fight the ships of the enemy’s Navy, to protect the Black Sea Fleet base from the sea. However, when the Wehrmacht 1941 broke into the Crimean Peninsula in October, the coastal batteries became the main caliber of the defense of Sevastopol from land. Considering the fact that the 35 battery was located farther from the German main strike area, the most prominent role in the defense of Sevastopol was destined to play the “Maxim Gorky-I” fort under the command of Major George Alexandrovich Alexander. The German command and engineers believed that the Maxim Gorky-I fort was "a true masterpiece of engineering art", therefore they paid great attention to its destruction. The positions of the batteries were subjected to continuous air strikes and shelling from super-heavy and heavy guns. At the end of May, the 600-mm “One” and “Thor” were pulled over a distance of 3,5 km to the 30-th battery. In the first five days of artillery preparation, they fired 18 shells. 5 June 1942 of the Fort Maxim Gorky-I produced seven 7-ton concrete-borne projectiles from Dora 800-mm. But none of them hit the mark. Battery shot their last 18 June shells. 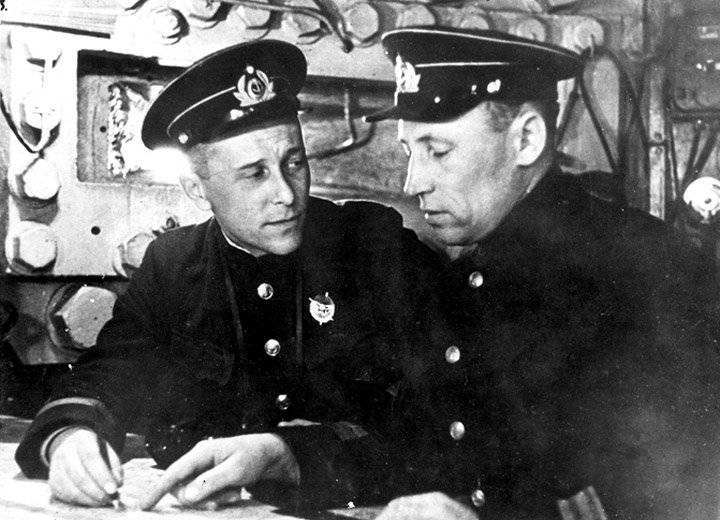 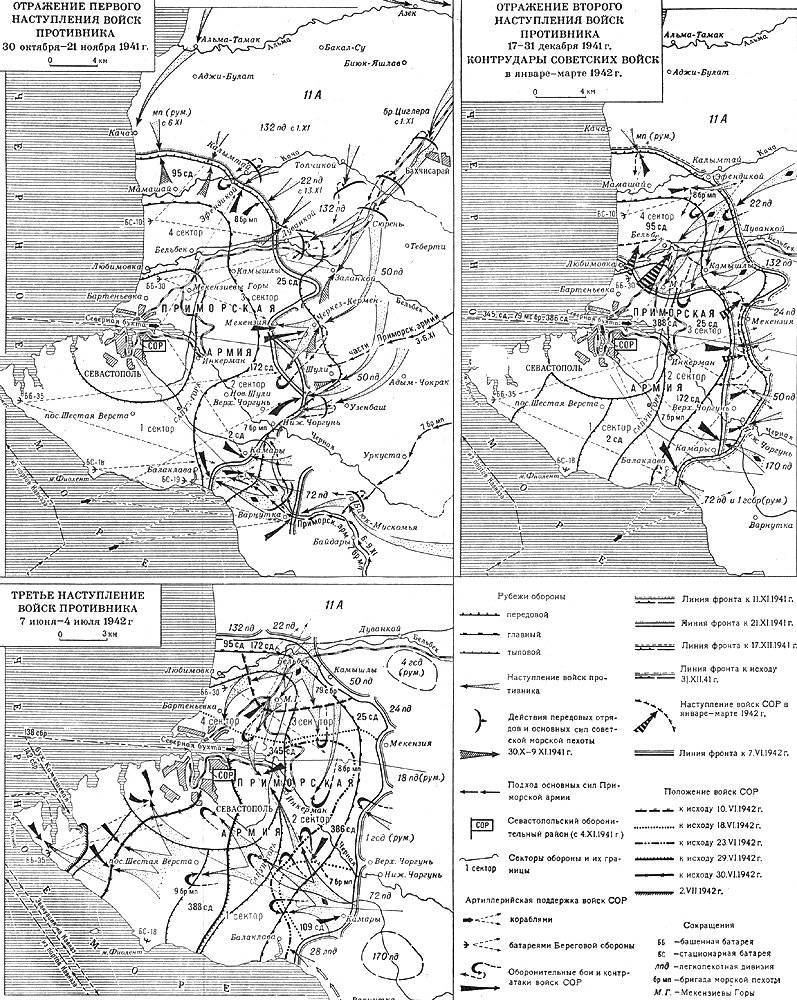 To be continued ...
Feat of Sevastopol

Year: 1971.
Country: USSR.
Genre: Chronicle-documentary.
Duration: 00: 58: 26.
Director: Dmitry Rymarev.
A film about the defense and liberation of Sevastopol in the Second World War with a unique trophy German and Soviet chronicles 1941-44.