To the Question of the Seven

The discussion on the development of relations between Russia and the Seven was again updated against the backdrop of the upcoming Biaritstsa summit. An important informational reason for the revitalization of conversations was the statement by French President Emmanuel Macron, who advocated inviting Russia to the G7 summit in 2020. Moreover, US President Donald Trump agreed to support this proposal, as CNN reported, citing a senior White House official. 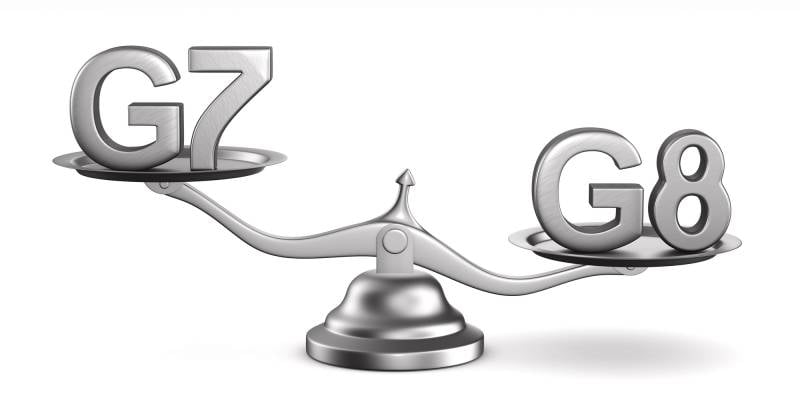 Russian experts once again began to discuss this issue, and in particular, the possibility of rapprochement and, probably, the general return of Russia to the “club”. However, here once again a kind of disease of “short memory and high expectations” manifests itself, which, alas, is so characteristic of domestic international affairs. Let us recall at least those reports on the establishment of relations with America that appear every time when elections are held in the United States or when summits take place. That's just the result, we continue to receive sanctions. The analogy with the "seven" in this case is extremely transparent.

Talk about a kind of “reset” of the relations went back to 2016, when German Foreign Minister Frank-Walter Steinmeier made the following statement: “I would not like the G7 format to be long-term, we need to create conditions for a return to the G8 format.” He also said: “Obviously, no serious international conflict can be resolved without the participation of Russia. Of course, a discussion will be held within the framework of G7 about when and on what conditions it is possible for Russia to return to the G8.

As we can see, no real shifts in the direction of rapprochement between Russia and the G7 countries have occurred, and in some aspects of interstate relations, cooling can be observed at all. In this regard, the question arises: maybe it’s enough to step on the same rake and stop waiting for some breakthroughs?

But first you need to understand what G7 is all about.

It’s worth starting with the fact that the Seven is not at all another international organization. There is no international treaty in its foundation, and it also has absolutely no internal bureaucratic bodies such as the secretariat. In view of such an organization, the status of membership is absolutely conditional, that is, there is no document that would officially confirm the status of a power as a member of G7. All decisions that countries make during negotiations are purely advisory. Therefore, this is just one of many negotiation sites.

History of what is now known as G7 began in 1975 as a reaction to the first oil shock. The founding fathers of the G-7 were six, and soon (1976) there were already seven countries that were the largest importers of energy. At first, the United States, Great Britain, France, Germany, Italy and Japan entered this club. As noted earlier, already in 1976, the representation of the Atlantic countries increased due to the inclusion of Canada.

Russian political scientist Aleksey Fenenko identifies two key stages in the history of G7. The first is energy, the second is the global agenda.

The first summit was held on November 15-17 on November 1975 in Rambouillet. During the meeting, the countries, then the Six, adopted a joint declaration on economic issues, the leitmotif of which was the call for non-use of aggressive geo-economic measures, such as the establishment of trade barriers. In addition, the summit agenda included purely energy issues. So, there were three main areas of cooperation, among which, one can note the diversification of energy supplies; ensuring adequate prices for liquid hydrocarbons and, finally, the development of alternative energy.

Then a series of meetings were held, which were also devoted to energy issues. This continued until the 1980 year (Venice Summit of Seven). Already at the Venetian summit, the agenda was significantly expanded, so a resolution was adopted that condemned the entry of Soviet troops into Afghanistan. The following year, a summit was held in Montebello, where the leaders of the G7 countries adopted a declaration that directly touched on issues of international relations (the situation in the Middle East, arms buildup by the Soviet Union).

That is, initially, the club really was a platform for discussing issues related exclusively to energy and partly, economic problems. However, further the agenda of the Seven has undergone a number of significant changes.

Gradually, the Seven raised increasingly global issues. Among other things, meetings of the ministers of foreign affairs, finance and education of the “member countries” of G7 have become traditional. A. V. Fenenko described the tactics of expanding the agenda as follows: The Seven relied on the effect of addiction. Well, the Soviet Union and other states will not send protests to them every time! And so it happened: already by the 1985 year, the summits of the Seven began to be perceived as the norm. And no one asked a simple question: on what legal basis do the leaders of the “group of seven” consider themselves entitled to discuss the “global problems” of mankind? ” He also cites a very interesting allusion to one of the founders, the so-called English school of international relations, Hadley Bull, who introduced the dichotomy of world society and the world community. “He argued that the Seven is a world society, and the rest of the world is a world community.” The task of the “world society” is to pull the rest of the world under its own rules. This was not the official position of the Seven. But the fact that this club is discussing global issues shows that Bull caught his spirit well, ”Fenenko notes.

Who needs the "seven"?

Thinking in the tradition of realpolitik, which can be expressed in words, the authorship of which is attributed to Otto von Bismarck: “The only healthy foundation of a great state, and it only differs from a small state, is state egoism, not romance, and it is unworthy of a great power to fight for the cause , not related to one’s own interest ”, the author recalls Mayakovsky’s lines“ After all, if the stars are lit, then does anyone need this? ”and asks the question: who actually needs a similar format of interstate interaction I?

The leader of this club, in terms of overall political and economic potential, is very obvious, and the same country is the unspoken leader of NATO. Of course, we are talking about the United States. America, by and large, has always adhered to the maxim that the current president declares, namely, US interests above all else. So G7, in fact, was a tool for creating the political and economic line that is beneficial to America under the pretext of a consensus solution to the "civilized world." In addition, the Seven is a very good tool to keep abreast of the political strategy of the leading European powers, in particular France and Germany. Thanks to this format of relations, the likelihood that these strange people will begin to pursue a course for which American foreign policy is not ready is minimized.

Russia in the "seven"

At the Seven Summit in Naples in 1994, the new 7 + 1 format was first tested. This unit, as you know, was Russia. Recall that at that time, Yeltsin was president of Russia, and Andrei, “Russia has no national interests, but only universal interests,” Kozyrev was Russian president. So her invitation was a logical consequence of a pragmatic American policy, which thus dragged Russia into the orbit of its own influence.

Gradually, Russia returned what A. Kokoshin called “real sovereignty”, however, we continued to participate in the G8 summits, apparently hoping to lobby our agenda. Alas, to beat a cheater, playing honestly in his own game, the task is impossible. It didn’t work out with us either. In the 2014 year, Russia left this “club of interests” in view of the conduct of an adequate and in line with national interests foreign policy in Crimea.

In general, one can summarize the participation of the Russian Federation in G8 with the words of F. A. Lukyanov: “The period of stay in the G8 from 1998 to 2014 was a time of a certain positioning of Russia. Moscow saw its task in being inside the "collective West". At the first stage - to integrate as it is, at the second - to try to turn the West-centered international system into a more diversified one, acting as a representative of "others". Neither the first nor the second failed due to objective reasons. ”

Is it possible for Russia to return to the “7 club”? Of course, such a turn of events cannot be completely ruled out, but such a scenario seems a little realistic. Strategic courses and an understanding of the national interests of the Russian Federation and the G7 countries diverge quite strongly.

All the high-profile statements of Western leaders about the return of Russia should rather be perceived as some kind of intelligence, are we ready to make some concessions in accordance with the conditions that may be put forward to us. Also, politicians making such statements largely work for their personal image, earning themselves political points. One can regard the casting of such bridges as an attempt by specific people to act as "goodwill ambassadors" who, as it were, give a hand to the "civilized world." Of course, nothing is hidden behind this except selfish interests.

Does Russia Need a Seven?

Despite the fact that the author considers the possibility of the return of the Russian Federation to G7 unlikely, it is worth asking another, much more important question: but, in fact, why should we return there? Participation in a fairly large number of international organizations (G7 is not an organization, but the recommendatory nature of decisions, in this context, equalizes them) does not give us any tangible political and geopolitical dividends. The closest example is PACE.

Russia does not feel any need for this format. Firstly, we can conduct a dialogue within the framework of G20, the political benefit of which is much higher. Russia can use the G20 platform to develop its own soft and, in part, acute force. Due to the greater inclusiveness of G20, we can intensify the development of our own metanarrative, the same “multipolarity”, which can be interpreted as the “globalization of antiglobalism”. With the right tactical maneuvers, Russia, thus, can form an alternative to Western hegemony project, thereby increasing its geopolitical influence.

Secondly, you need to learn from the best. Trump purposefully pursues a policy of conducting bilateral relations as opposed to international organizations, since real-life policy issues are resolved, first of all, during the course of bilateral high-level meetings.

Russia should approach every issue of world politics from the standpoint of absolute pragmatism and make decisions based on the principle of its own benefit. G7 is no exception.