Goebbels would envy. How Americans brought children from Cuba

Currently, there are two diametrically opposed points of view on Operation Peter Pan: American and Cuban. Naturally, in the USA they are doing their best to justify the forgery and deceit towards Cuban minors in that stories. According to American propaganda, an alarming situation developed in Cuba in the beginning of the 60's: schools closed, labor camps were organized, they planned to pick up their children, and planned to send the most gifted to the Soviet Union almost to hard labor. The Cuban revolution took control of all private schools and prepared something unimaginable for the younger generation. Mutual fooling and total propaganda raged on Liberty Island. The Central Intelligence Agency of its citizens and immigrants from Cuba fed about such theses. In fact, the new Cuban government after the revolution faced a high proportion of the illiterate population, which seriously complicated both the further development of society and the introduction of the ideas of communism into the masses. Of the six million inhabitants of Cuba, about one million could neither write nor read. 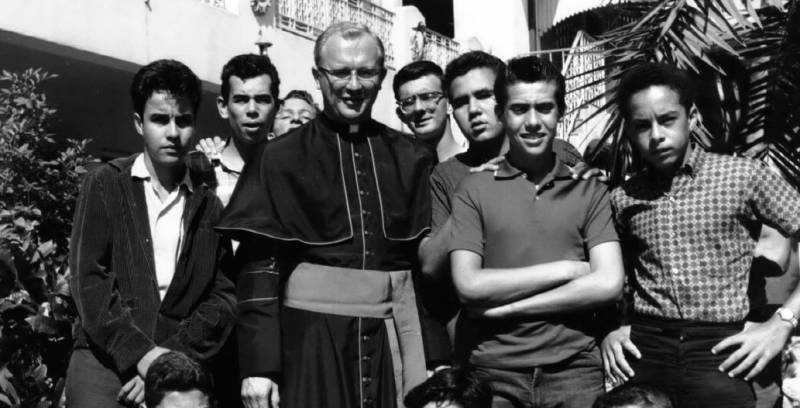 Father Brian Walsh. It was his idea of ​​Cuban children that was picked up by the CIA

In villages, of course, the proportion of illiterates was maximal - up to 50%. In the very first years, Fidel Castro assembled the “Army to Combat Illiteracy,” volunteers from which began to enlighten the population with enthusiasm, simultaneously explaining all the benefits of the communist revolution. And by October 1961, Fidel began to receive similar letters from the population:
“Thank you, Fidel. Now I can read and write thanks to the Revolutionary Government. Homeland or Death. We will win"
. Tens of thousands of people who did not know how to write and read before became ardent communists and devoted party members. Could such a situation suit the United States? Right next to it, a hotbed of hated communist infection grew and something had to be done.

One of the countermeasures programs was the creation, under the leadership of the CIA, of the “2506 Brigade”, assembled from opposition Cuban immigrants. According to the plan, about one and a half thousand fighters in April 1961 landed on the infamous Bay of Pigs in the hope of overthrowing Fidel Castro. Then the entire US establishment and ordinary citizens were convinced that the upstart revolutionary would not last long on the throne and only needed a push to overthrow. The result was a sea of ​​blood, an unsuccessful operation and serious reputational losses of the United States in the eyes of the world community. However, with another little-known American intelligence operation, developers were much more fortunate. The Peter Pan project meant at the very dawn of Fidel Castro’s reign, to bring out as many Cuban children as possible in the USA, so that they could later create the backbone of the counter-revolution. The official inspirer of the operation was the priest from Miami, Father Brian Walsh, who drew attention to the unenviable fate of children in Cuba. U.S. intelligence picked up this idea and developed a whole propaganda hoax with the goal of dusting the brains of the Cuban population.

Exodus of children from Havana to Miami

Relying on the relatively low literacy rate of the Cuban population and a large percentage of those who doubt Castro’s long reign, the Americans managed to complete the largest evacuation operation in the western hemisphere. A flurry of misinformation literally rained down on Liberty Island. Since October 1960, US radio stations broadcasting into Cuba have launched the myth of a new bill that Fidel Castro allegedly signed and, according to which, they plan to give all children to the care of the state. That is, they will simply be taken from their parents and will be disposed of at their discretion upon reaching 20 years. Perhaps the most naughty will even be sent to Siberia to uranium mines. Then, CIA agents distributed fake bills to the wealthy strata of the Cuban population and the opposition underground, in which this lie was revealed in detail. Allegedly, they managed to steal documents almost from the table of Fidel himself. The intelligence services of the Cuban revolution at that time were weak and could not stop such a violent attack in time. 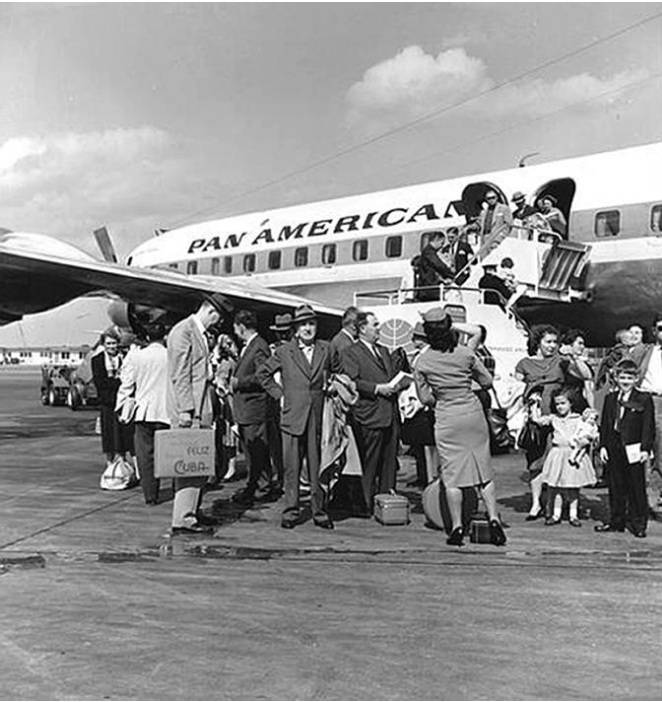 The only way out for thousands of Cuban families was to save the children in the United States. In addition, the Americans assured that the Castro regime was short-lived, and the prospect of reuniting separated parents with their children was about to fall. The operations involved KLM and Pan American Airlines, which provided Cuban children with free tickets on the Havana-Panama-Miami route. At Havana Airport, a glass waiting area or “aquarium” was constructed to pre-detain young immigrants. The children entered it after parting with their parents, many of whom they would never see again. As a result, from December 1960 to October 1962, about 14000 children under the age of 16 years without parents were transported through Panama to the USA. For this, the American embassy in Havana left and right distributed visas to the children of the Cuban elite - ordinary peasants were deprived of this opportunity. The thing is the relatively high level of education of the children of wealthy citizens - these are exactly the kind of immigrants that were needed in the USA. 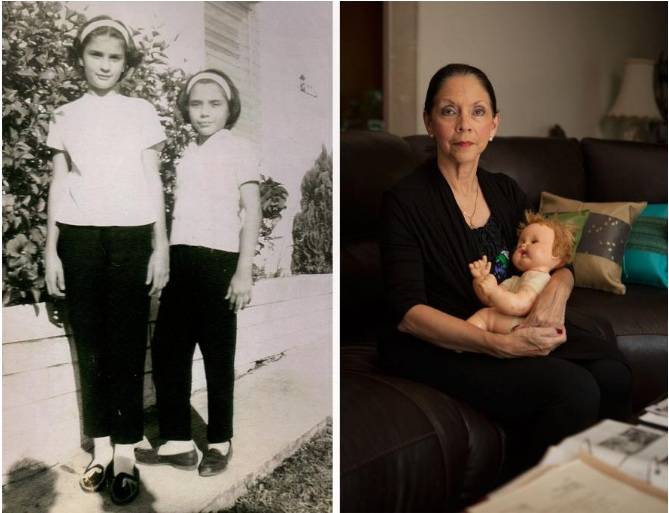 In the photo on the left, Mercedes Dash (standing on the right) and her older sister in front of the Miami residential complex in 1963. Two years earlier, they were “evacuated” from Havana. On the right, at his home in Fairfax, Dash (62 of the year) holds a doll that her parents gave her as a farewell gift

The Americans were also worried that the young rich could become the backbone of the Communist Party and the reliable pillar of the Castro regime in the future. With the assistance of the Catholic Church, several hundred shelters were organized to receive children in the United States, from which they were often taken by close relatives who had previously immigrated from Cuba. The parents of some children, in fear of persecution by the Communist Party, left after their children and settled in the United States. But a considerable part remained in foster families or even in orphanages without the care of relatives. Why failed to reunite all families? The answer is simple - the Americans stopped issuing visas after the Caribbean crisis of October 1962, and the children remained virtually owned by the United States. Yes, and the operation "Peter Pan" stalled with the onset of the Caribbean crisis. In total, the Americans spent about 13 million dollars on the criminal program at the rate of 1962 of the year. But it is worth mentioning separately that among the sponsors of the operation were American businessmen, whose enterprises were nationalized by Fidel Castro. 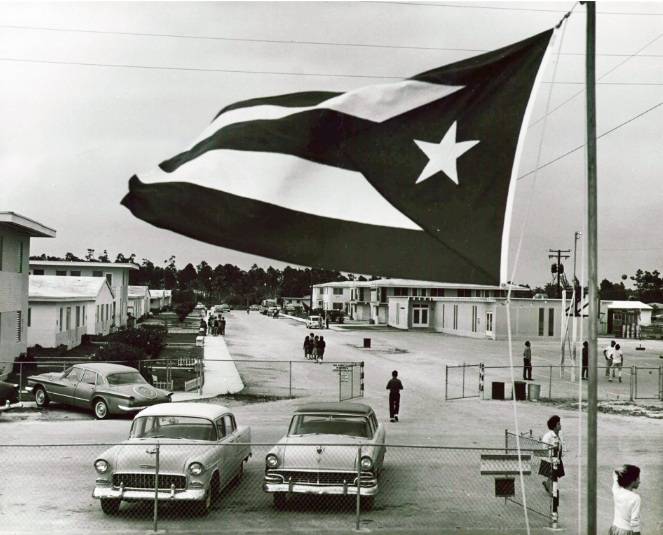 One of the shelters for single Cuban children

Now in the United States, all the details of Operation Peter Pan are covered exclusively in a positive light. Public opinion has been created, according to which the Americans are true heroes, true Catholics and saved thousands of innocent souls from the clutches of the totalitarian regime. In Miami, there was even a thematic exhibition of personal belongings of witnesses and participants in the children's outcome, generously flavored with lyrical installations. In 2009, Fidel Castro compared the insidiousness of the special services with the talents of the chief propagandist of the Third Reich with the words:
Goebbels would envy.
Indeed, 14 thousand children assimilated very well, became typical Americans and even write books, as they felt bad in their native Cuba. True, an effective counterrevolutionary force capable of overthrowing the Cuban regime did not work out of them. But many of them, in good conscience, say that living with parents in totalitarianism is much worse than being an orphan in free America. However, there are units among them that require the state to disclose all the details of Peter Pan. In particular, the publication of directives by the CIA and the State Department on this topic. But 15 thousand documents remain classified in the archives of the special services. Apparently, the time has not come yet ...