Advantages and disadvantages of “Kleshch-G” mine layer

August 22 2019
11
At the end of June, at the Army-2019 forum, NPK Uralvagonzavod presented for the first time three promising universal mine loaders developed as part of the Kleshch-G experimental design work. In the future, such equipment may come into service with engineering units and simplify the installation of minefields. The real future of the proposed vehicles is still unknown, but it is already possible to evaluate them and determine their value for the troops. 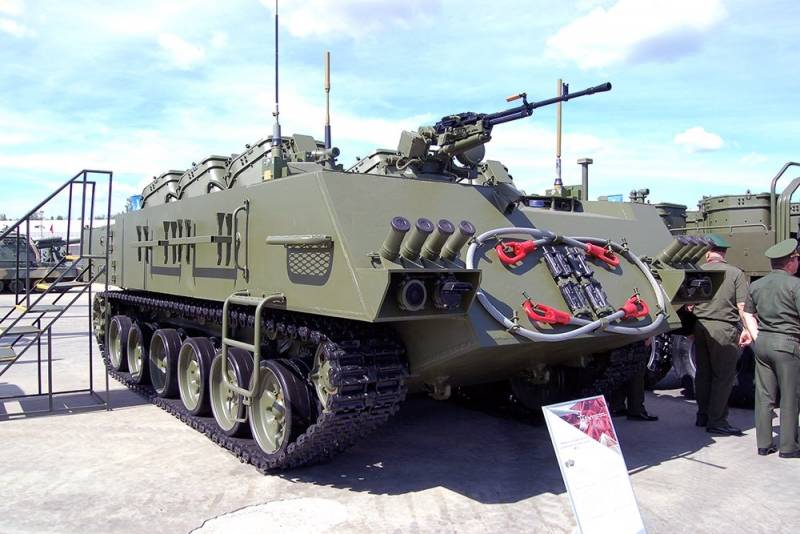 The goal of the Kleshch-G development center was to create the appearance of a promising universal mine layer (UMZ) as a whole, as well as to study its individual elements. Using the created solutions, we developed three versions of remote mining machines based on different chassis and with some differences in capabilities.

The largest representative of the new family is the UMP-G armored car. It is built on nodes tanks T-72 and T-90 and differs from other samples in large mass and size. UMZ-G mounted nine launchers for 270 universal mine cassettes. The mass of such a trap is 43,5 tons, mobility remained at the level of the main tanks.

The middle layer is designated as UMZ-K and is built on the basis of an armored car with a three-axle chassis "Asteys-70202-0000310". Such a machine with a curb weight of 18,7 t carries six units with 180 cassettes. In terms of mobility, UMZ-K is comparable to trucks.

The lightest example of the Kleshch-G development center is the UMZ-T machine. It was built on a two-axle chassis "Typhoon-Airborne" and equipped with two launchers with ammunition from 60 cartridges. The curb weight is less than 14,5 t. Driveability remains at the standard. 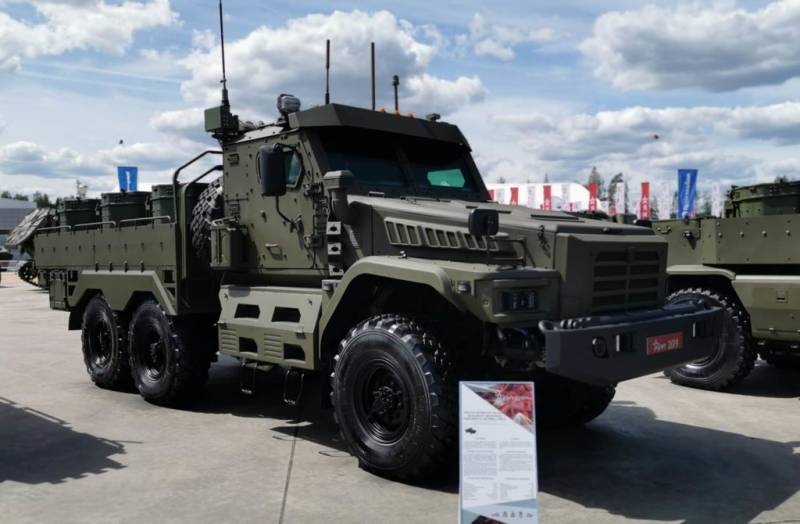 UMZ "Kleshch-G" is intended for the installation of mines of loose air, incl. on the path of the enemy troops. Through the use of universal cartridges, they can use mines of different types and for different purposes. A common feature of all samples is the use of modern controls that provide work with mines. With the help of on-board communications, the trap is included in the Unified Tactical Link Management System. Through it, the reception of commands for mining and the sending of the barrier form to the command is carried out.

As part of the Kleshch-G development center, a set of tools and instruments for mining was developed, suitable for use on different chassis. The creation of such a unified kit can be considered the main advantage of the project. The customer is given the opportunity to select the desired chassis and place on it the optimal set of systems from the Kleshch-G kit. A similar project potential has already been shown with the help of three UMPs on different chassis. In the future, new models of this kind may appear, again demonstrating the benefits of unification.

It should also be noted that the launchers of the new barriers are as similar as possible to the equipment of older vehicles. Compatibility with existing cassettes of remote mining systems is maintained. Thus, the re-equipment of engineering parts will not lead to problems in the production and supply of ammunition.

Two of the three prototypes shown are built on existing chassis with minimal refinement. The third chassis is newly developed, but makes the most of the components and assemblies of serial tanks. It is only a question of the production equipment of new models, which in the future should ensure the unification of army vehicles for various purposes.

UMZ of the Kleshch-G line receive unified launchers with 30 cells for each cartridge. The unit is equipped with an electric start-up control system and programmers for entering data into fuses min. Preparation and firing of mines are controlled from the operator's console. 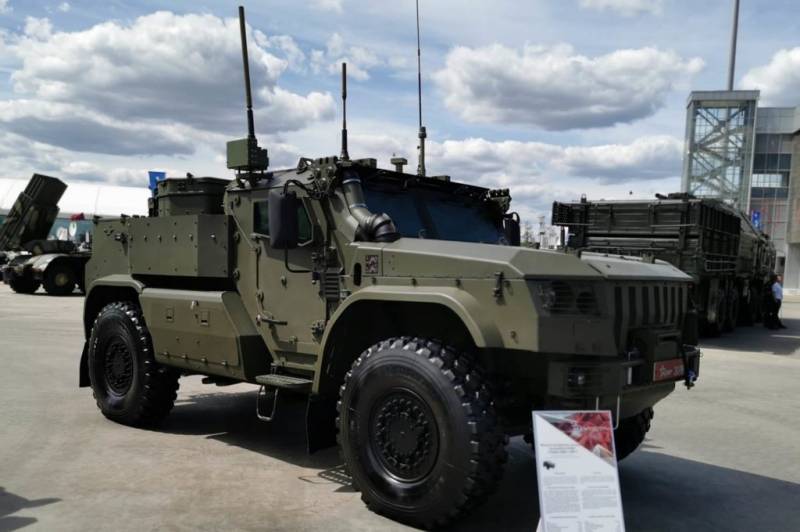 The installation is capable of firing the contents of the cassettes one at a time, in series or in one gulp. The emission of mines is ensured at a distance of at least 40 m. The presented UMPs set mines in the rear hemisphere, both in the traffic lane and on either side of it. With universal containers, mines of different types are used. Volley volumes, minefield sizes, etc. depend on the model of the mine.

On-board equipment provides launch control, as well as collects data on mining and prepares an electronic minefield form. This information is automatically sent to the command.

From the point of view of the principles of operation and the main characteristics of mining, the Kleshch-G product does not differ much from the UMZ production choke on the ZiL-131 chassis. Advantages over the older model are provided by new chassis, control systems and other components. In addition, it is necessary to note the difference in the age of the samples and the use of modern technology in the Kleshch-G project.

Two of the three barriers of the new family are based on the already known armored cars. The third sample, UMP-G, was made on the basis of the original tracked chassis, which is based on developments in MBT. This model of equipment presented by NPK Uralvagonzavod may also be of interest in isolation from Kleshch-G development center. 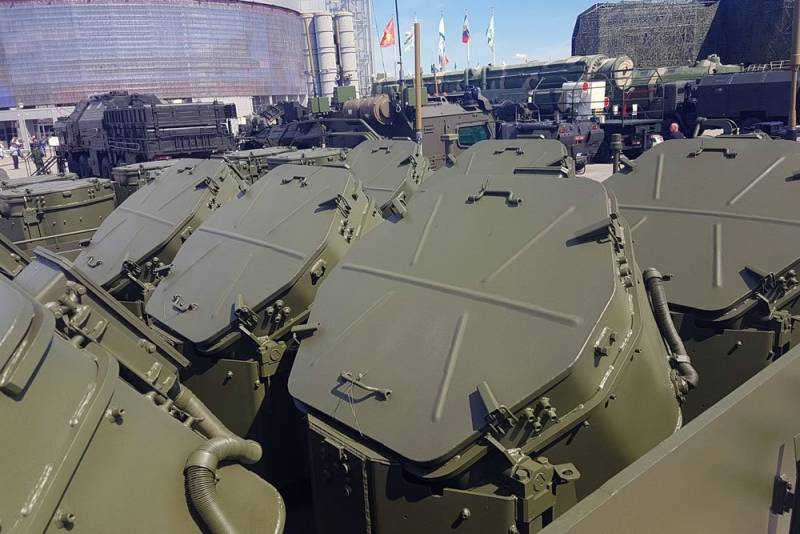 Based on the tank chassis, a multi-purpose armored platform was built, suitable for the installation of various means and systems. The power units and chassis of the tanks probably did not undergo drastic changes. At the same time, they used a new building with Br4 level protection that can withstand shelling from an automatic machine using armor-piercing bullets. The resulting machine has a large cargo area with perimeter protection and is distinguished by a certain carrying capacity margin while maintaining tank mobility.

Such a tracked armored vehicle can be used not only as a UMP. On its basis, you can build a protected vehicle for personnel, commanders or the wounded, and also use it to install the necessary equipment - from radio stations to various weapons. The relatively high performance characteristics of such samples will again be supplemented by the advantages of unification.

Fly in the Ointment

However, the shown results of the Kleshch-G development center have not only pluses. You can find reasons for criticism, affecting all the main components of the demonstrated technology. It is curious that such disadvantages of cars turn out to be the “reverse side” of their obvious advantages.

The unification of the ammunition used by existing means of remote mining leads to the absence of a significant increase in performance. Advantages over serial UMP with six launchers have only the UMZ-G tracked vehicle carrying 270 cartridges with mines. UMZ-K, according to its ammunition capacity, is comparable to the old model, and UMP-T is inferior to it. 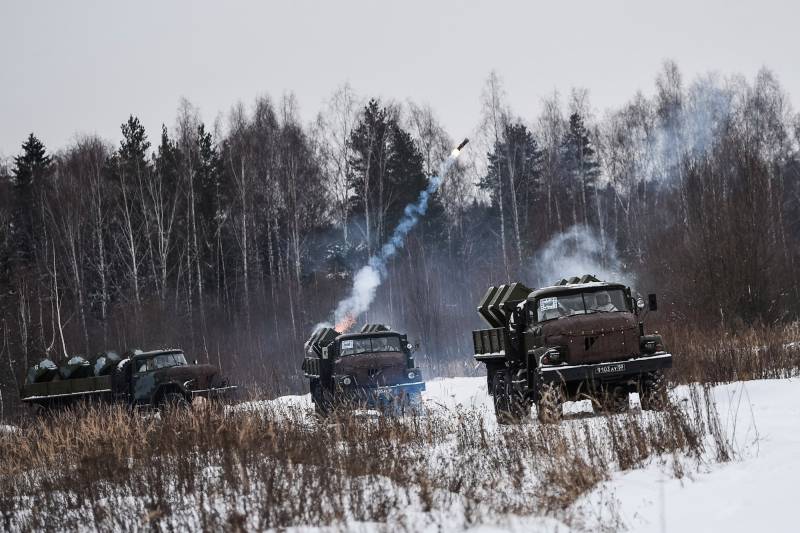 Operated UMPs are built on a well-developed automobile chassis, while Kleshch-G development center offers equipment based on new platforms, including those that have not yet reached serial production. Armored vehicles "Typhoon-Airborne Forces" and "Asteis" have not yet received wide distribution in our army, and the base for UMP-G is still under testing. As a result, the early introduction of new barriers may lead to the de-standardization of the fleet of engineering troops. The positive consequences of using such chassis will only appear in the distant future, when the proportion of modern cars increases.

Presented at the end of June, three types of universal mine loaders have pros and cons. They cannot be called ideal, but they are not a failure. In the proposed form, such a technique may be of interest to the troops, but the need for certain modifications cannot be ruled out.

Available information about the Kleshch-G development center suggests that work on the new UMP is not yet completed, and the equipment is not ready for commissioning. It is possible that in the course of further development various changes of various scales will be introduced into the project. Probably the improvement of all the main components of the equipment and its equipment, aimed at getting rid of existing shortcomings.

In the medium term, Klesch-G family barriers will be able to enter state trials that show their real potential and compliance with army requirements. If the checks are successful, the armament of the engineering troops will receive new models of remote mining systems with a number of characteristic advantages.