August 21 2019
25
The only army brigade aviation The CVO, deployed in the Sverdlovsk region, replenished with new helicopters. The armament of the brigade received two new attack helicopters Mi-24P. This was reported by the press service of the district. 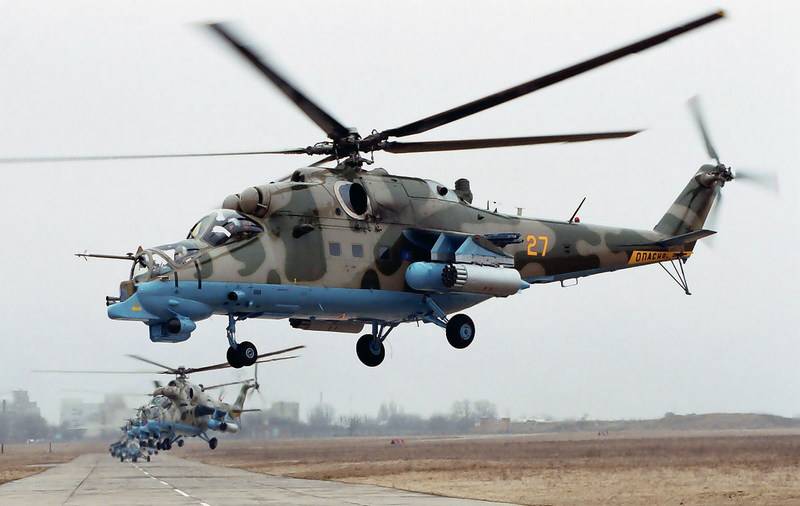 According to the report, helicopters arrived at the airfield of the unit on their own. Pilots of the Mi-24 helicopter squadron previously underwent training at the Combat Training and Retraining Center for Army Aviation in Torzhok.

Multipurpose attack helicopters will significantly increase the combat capabilities of the army aviation brigade. Mi-24 crews will perform tasks within the framework of flight tactical exercises, as well as be used in various tactical exercises from company to brigade level
- said in a statement.

The press service noted that the first six MI-24P helicopters received the army aviation brigade in December last year, and in March four more helicopters of this type entered the brigade. In April, the brigades conducted the first flight tactical exercises with the participation of 10 Mi-24P. In May of this year, helicopter pilots received four more rotorcraft. Now, taking into account the new arrivals, the brigade is already armed with 16 new Mi-24P attack helicopters.

Mi-24 (according to NATO classification: Hind - "Lan") - Soviet / Russian attack helicopter developed by the Design Bureau M. L. Mil. The unofficial name is "Crocodile". The serial release began in 1971 year. The Mi-24P model differs from the base Mi-24 model by the presence of the GSH-30K gun placed on the starboard in the fixed installation НПУ-30. The serial release began in 1981 year. Exported as MI-35P.

The helicopter is designed for the transfer of ground forces and fire support on the battlefield.