August 21 2019
106
The old AKS-74U, which has been in service since 1979, was found a replacement. True, so far only in the videoconferencing. The shortened version of the legendary Kalashnikov assault rifle can be replaced by the 9-mm submachine gun PP-2000, to the creation of which experts from the Tula Design Bureau of Instrument Making had a hand. Russian military pilots are going to arm with a new submachine gun, which was first presented to the Russian public in 2004 at the Moscow Interpolitech exhibition. 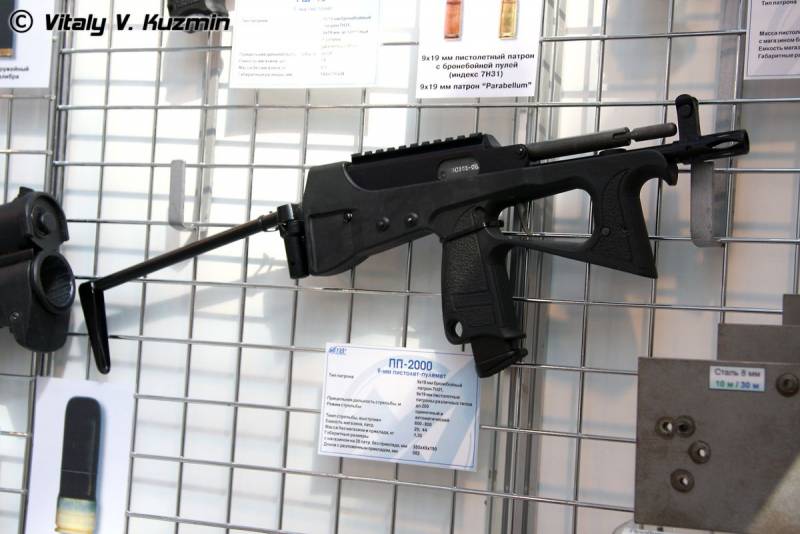 PP-2000 submachine gun can become a new rifle weapons "Last battle" for military pilots who had previously been armed with either an AKS-74U machine gun or a Stechkin automatic pistol. The decision to modernize the NAZ - a portable army supply of pilots piloting combat aircraft was made by the country's military leadership based on the results of the Russian Air Force operation in Syria. The possible replacement of the AKS-74U with a more compact and convenient PP-2000 last week was reported by the TASS agency, citing its own sources in the Russian defense industry. It is noted that representatives of the Ministry of Defense took with interest the proposal to replace the AKS-74U with the PP-2000 received from representatives of the military industry. At the same time, TASS journalists do not have official confirmation of the information that was provided by their source.

Today, in addition to water, food, a portable first-aid kit and communications equipment, a shortened version of the Kalashnikov assault rifle of 5,45 mm caliber - AKS-74U is also being included in the pilot’s wearable army reserve, which, before groundbreaking operations, is put into a special cup fixed under the ejection seat, besides water , a stock of cartridges for him, as well as grenades. This set is a necessary minimum of things that can be useful to a pilot during an emergency ejection, especially over territory that is occupied by enemy troops.

AKS-1979U assault rifle adopted in the 74 year as a whole satisfies all the requirements of small arms for self-defense. This is a relatively compact weapon (the barrel is two times shorter than that of the traditional AK-74), which has high firepower and a good firing range (effective distance to 300 meters). The main problem is related to the placement of weapons, their dimensions and mass. NAZ together with the machine gun are located in an ejection seat, at the same time, the pilot does not always have the opportunity to get to the set. In some cases, the pilot has to engage in battle with the enemy immediately after landing by parachute, and sometimes even while in the air. That is, the combat pilot should be able to quickly get to the weapon. That is why in Syria, during combat sorties, the pilots took with them additional firearms - Stechkin or Makarov pistols, which together with spare stores could be placed in the pockets of the unloading vest. But the combat capabilities of such pistols are extremely limited, and the firepower of such weapons is not great. 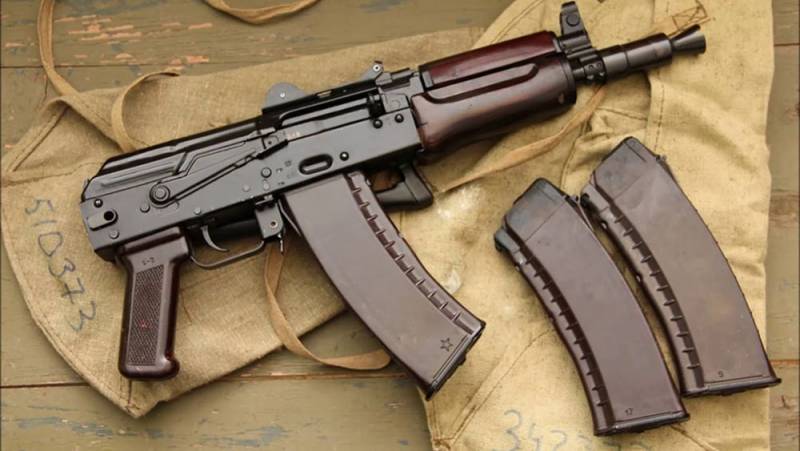 This problem raised the issue of re-equipping combat pilots with more compact and light models of automatic weapons than the AKS-74U. Fortunately, small arms with the necessary firepower exist in our country. We are talking about submachine guns, whose school of development in Russia is very well developed, and even schoolchildren are familiar with mass samples of such weapons from the time of the Great Patriotic War. As a possible replacement, the AKS-74U is considering the Tula PP-2000 submachine gun under the 9x19 mm Parabellum cartridge, widely used around the world. The new Russian submachine gun was created at the beginning of the 2000's in the Tula Design Bureau under the leadership of recognized domestic designers V.P. Gryazev and A.G. Shipunov. The model of compact small arms created in Tula was initially positioned as a weapon for law enforcement officials, as well as a personal self-defense weapon for certain categories of soldiers (pilots, armored crews, gun crews, etc.). Despite this, so far the PP-2000 has gained distribution only in some units of the Ministry of Internal Affairs of the Russian Federation, as well as in the Federal Bailiff Service.

Features of the PP-2000 submachine gun

The main advantage of the PP-2000 submachine gun over the AKS-74U is its low weight. A submachine gun without a magazine with ammunition and a stock weighs only 1,4 kg, this is a very worthy indicator for weapons of this class, which makes it possible to attribute the model to one of the lightest on the planet. For comparison, the AKS-74U machine without a magazine weighs 2,7 kg. The submachine gun gains much in weight not only due to its smaller size, but also due to the fact that the body of the weapon is made of high-strength plastic. At the same time, shops with 20 or 44 cartridges can be used with weapons, which also increases the variability of tactical use of the PP-2000 submachine gun.

The submachine gun also wins in overall dimensions. The length of the weapon without a butt is only 350 mm, with the butt unfolded it does not exceed 582 mm. At the same time, the length of the AKS-74Y with the stock folded is at least 490 mm, that is, the machine is 140 mm longer than the PP-2000. The only thing the submachine gun absolutely loses to Kalashnikov is the maximum effective firing range, which for the PP-2000 does not exceed 100 meters. But this is the case when you can compromise between compactness and firepower of the model. Still, the pilot will not have to conduct a combined arms battle, especially at long distances. First of all, a pilot needs a weapon for self-defense in close combat. Also, compact and light weapons are better suited for military operations in urban environments. 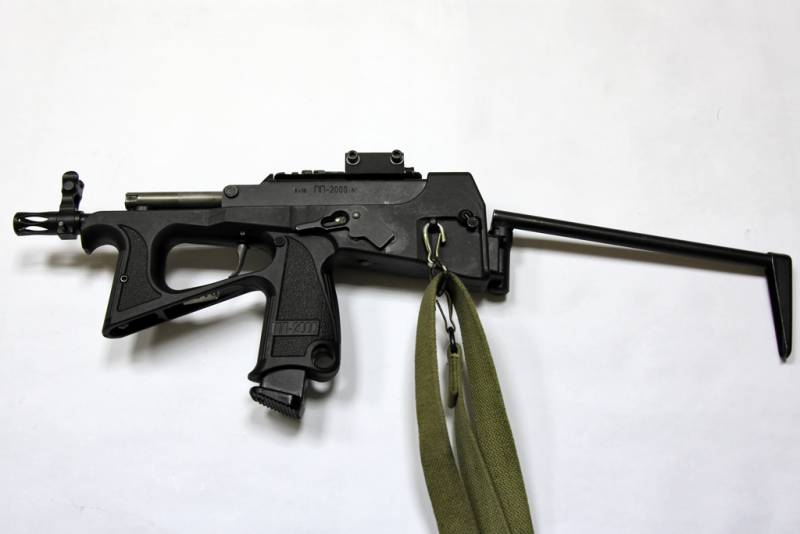 At the same time, like any modern small arms, the new Tula submachine gun has a number of features that make its operation and use more convenient, and the model itself is very practical. Although the fuse-translator of fire modes is located on the left side of the submachine gun, the magazine latch button and cocking handle can be easily reassigned to any side of the weapon, which makes the PP-2000 convenient to use for both right-handed and left-handed people. Another worldwide trend is the regular use of Picatinny rail guides. On the submachine gun, you can easily place a collimator sight, which will facilitate the aiming process, especially in low light conditions, as well as another tactical kit from the laser target indicator and tactical lights to night vision devices. It is allowed to use PP-2000 with a silent firing device.

In general, designers from Tula have worked quite seriously on the ergonomics of weapons, having implemented several interesting solutions. If the pistol grip, which is also the neck for stores, is the traditional move of submachine gun designers, then the massive-shaped trigger guard is an interesting solution that allows the shooter not only to use it as a fire control handle, but also to fire at the enemy without removing from the hands of thick gloves. Another interesting design decision is the possibility of using a spare magazine with cartridges as a shoulder rest. At the same time, at the exhibition in 2006, the public was shown the PP-2000 model, which received a removable butt in the form of a side-folding metal shoulder rest.

Separately, it is possible to note the ammunition used. PP-2000 is designed to use the common 9x19 mm cartridge, which is in many ways inferior to the 5,45x39 mm cartridge of the AKS-74Y machine gun. But even in the caliber 9 mm, quite powerful ammunition has been created today. So, together with a submachine gun, a line of armor-piercing cartridges of increased power can be used - 7Н21 and 7Н31. The use of 9-mm cartridges with the armor-piercing bullet 7Н31 significantly expands the capabilities of firearms, increasing not only penetrative, but also stopping action (in comparison with other cartridges of the caliber 9x19 mm). According to the test results, the armor-piercing bullet 7Н31 is able to penetrate up to 8 mm of steel at a distance of 15 meters, 5 mm at 50 meters and 3 mm at 90 meters. Such characteristics of the ammunition allow the shooter to confidently hit enemy soldiers using personal protective equipment (body armor, helmets), as well as targets located behind light shelters, for example, inside cars. 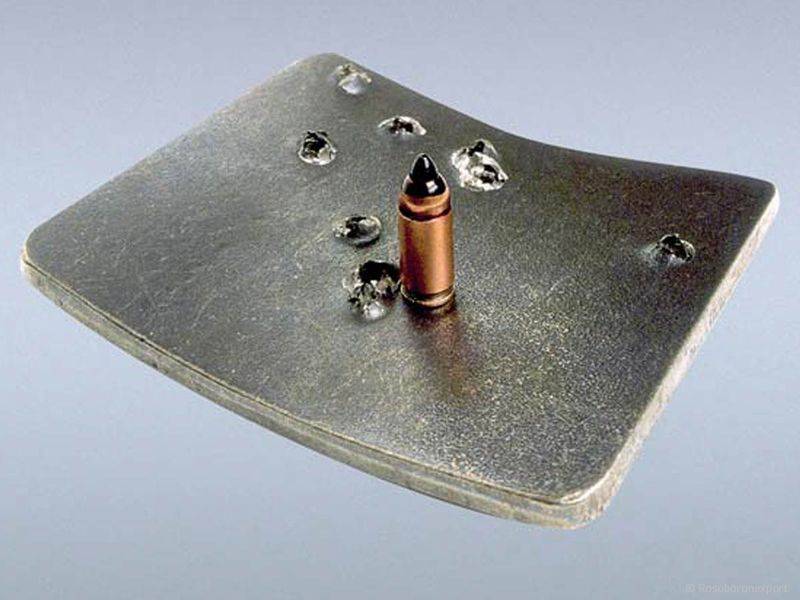 Another advantage of the PP-2000 is its low recoil and good balance of weapons, which allows firing from a submachine gun even with one hand, including without a shoulder rest. In fact, weapons can be fired like a conventional pistol. This is an undeniable plus, given that during the bailout process the pilot may be injured or injured before leaving the aircraft cabin. In such circumstances, operating the PP-2000 is much easier than using the same AKS-74U machine.