Look through the earth

Geospatial information for the army is currently becoming increasingly important. In all countries, defense departments understand that promptly providing troops with a description of the terrain and geodetic parameters can decide the outcome of the confrontation. Since the 1996 year, the National Geospatial-Intelligence Agency (NGA), headquartered in Springfield, Virginia, was created to collect, analyze, and transmit similar information to the troops in the United States. The new structure has replaced the National Agency of Images and Cartography (NIMA). The circle of the main tasks of the structure very well illustrates the motto of the office:
"Explore the earth ... Show the way ... Know the world ...". 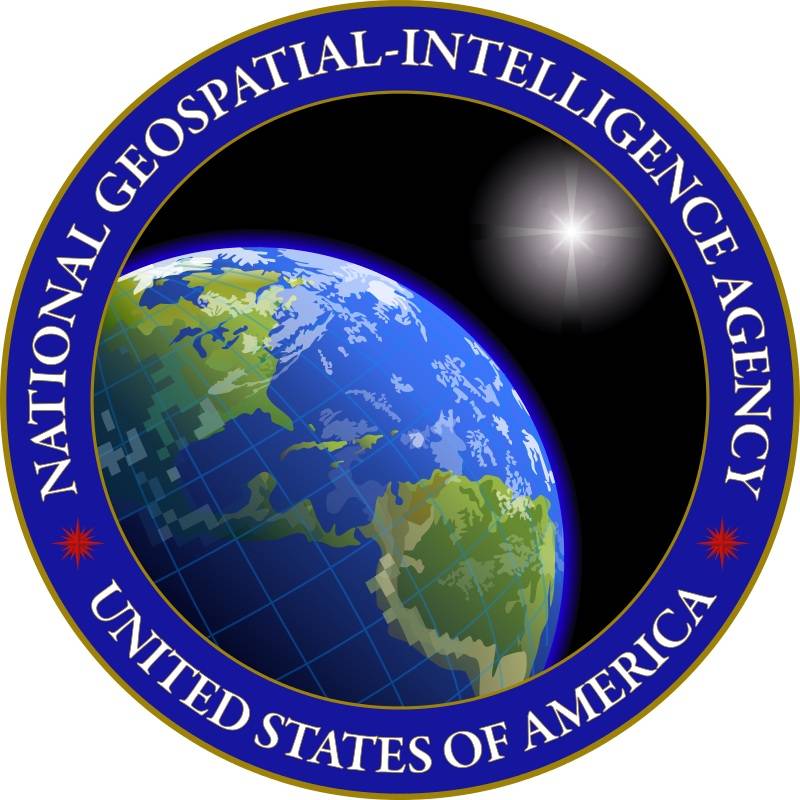 Specialists from Springfield study not only the structure of the surface and near-Earth space, but also conduct active subsurface exploration. Currently, the head of the service is Robert Cardillo, an absolutely civilian person with a degree in art from Cornell University. According to reports, Cardillo turned out to be a good analyst of species intelligence at NIMA, which allowed him to significantly advance in service. Cardillo reports directly to the Under Secretary of Defense for Intelligence and the Director of National Intelligence. 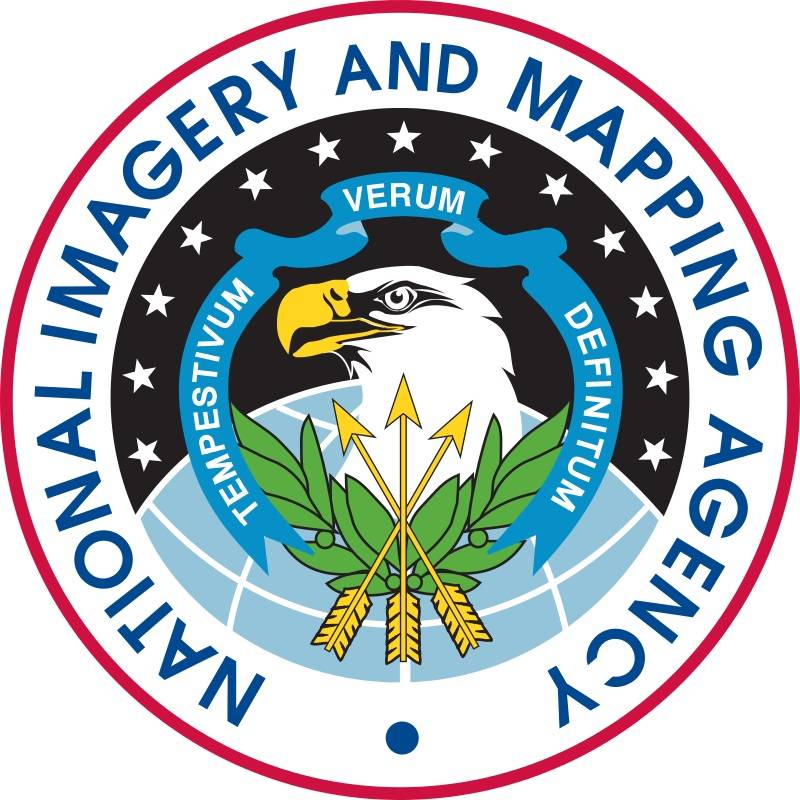 The NGA service has the status of a strategic agency and is one component of a large US intelligence pool, which includes at least 17 agencies at various levels. In particular, the tasks of the NGA largely overlap with the functionality of the US National Aerospace Intelligence Agency and, in part, with the CIA itself.
More than 35 million cards in print and digital versions are created annually based on NGA intelligence and analytical work for the needs of the US Department of Defense. For work “in the field”, geospatial intelligence centers have been created that provide the center with the necessary information. In addition, such centers located at US military presence facilities around the world coordinate the communication of the military command with the NGA head office, and also compiles three-dimensional maps of the area. Each such center of “combat geologists and cartographers” consists on average of 30 specialists. 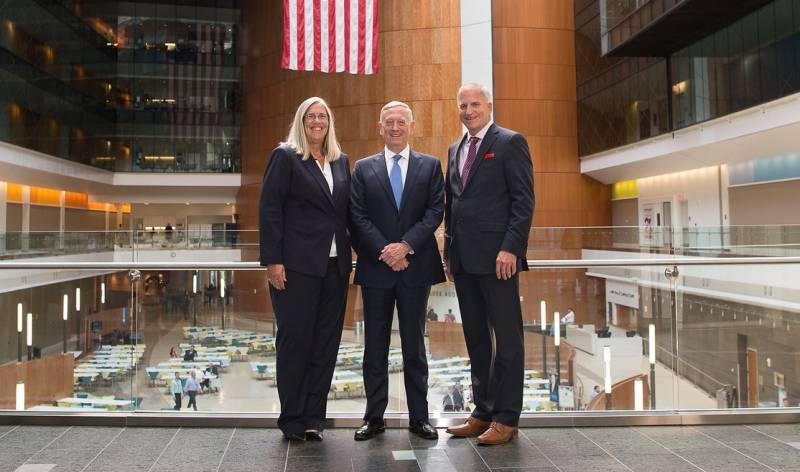 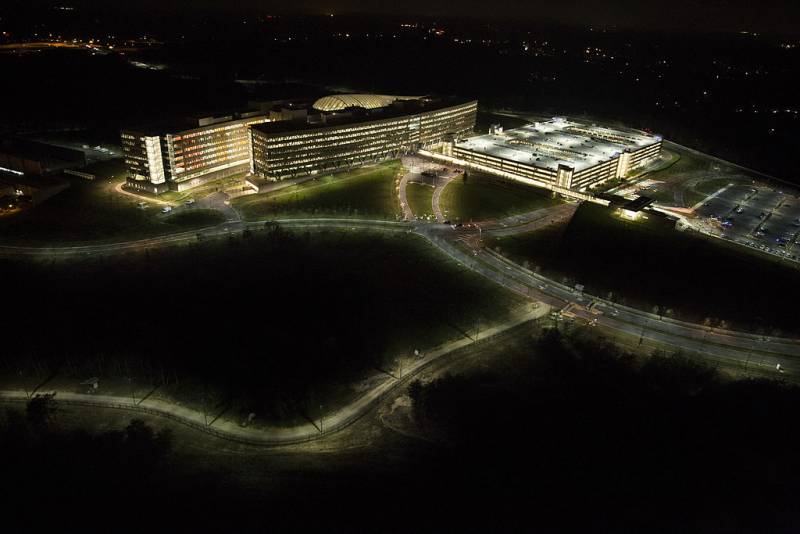 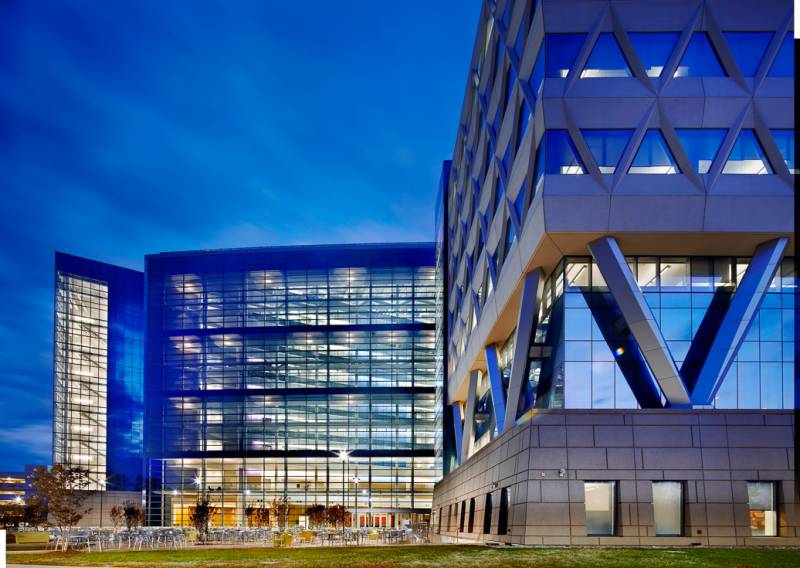 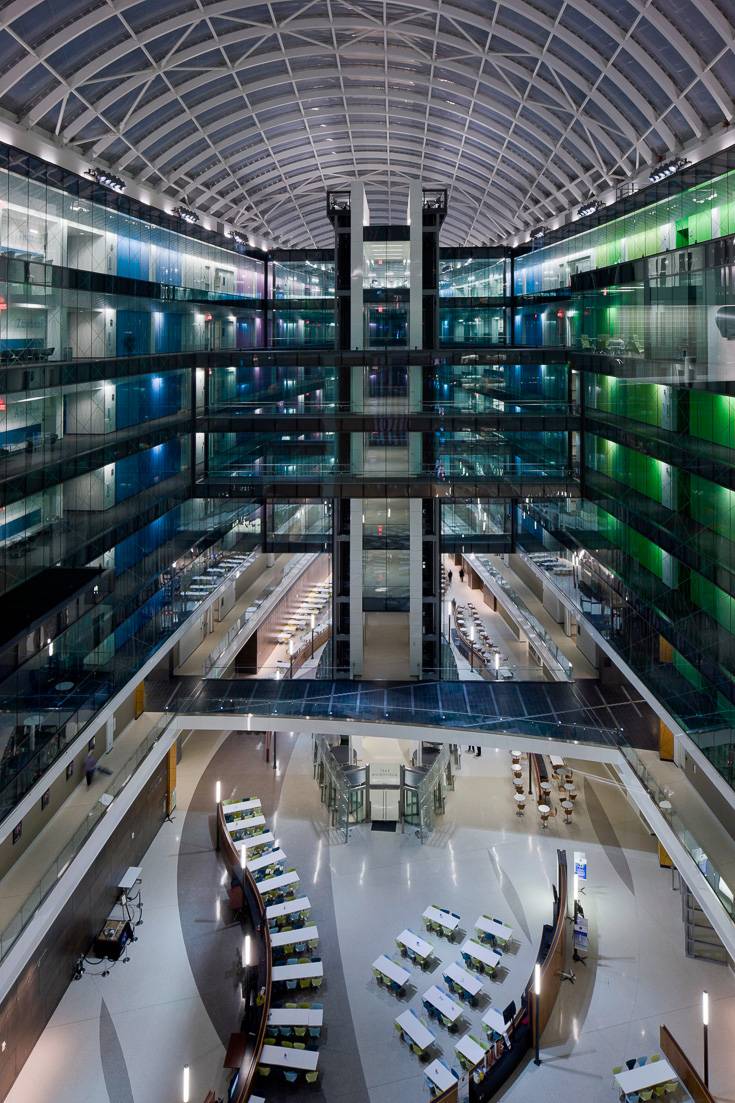 The conflict in Syria has become a good testing ground for the NGA to break into new items - subsurface sounding systems. This technique was originally intended for use on the US-Mexican border to detect underground tunnels for drug trafficking and illegal migration. But even in Syria, the militants very successfully used dug multi-kilometer moves both for organizing attacks and retreats, storing equipment and ammunition, and for undermining especially important enemy targets. The identification of such wormholes has become one of the main tasks of US HSPAs in Syria. Remote subsurface sounding also allowed the Americans to declare in 2017 that underground storage facilities for chemical weapons.

In the tactical reconnaissance unit, NGA experts use the Husky Visor 2500 heavy mine detector equipped with four Ground Penetrating Radars capable of probing the subsurface layer to a depth of 1,8 meter. In addition to the machine detecting, marking and neutralizing mines, it is able to create a three-dimensional picture of the underworld, highlighting suspicious voids. Visor 2500 is actively used by NATO countries, in particular, Spain has purchased a batch of machines for work in Afghanistan. Turkey, which plans to use cars in the Syrian conflict, is also interested in buying wheeled radars. 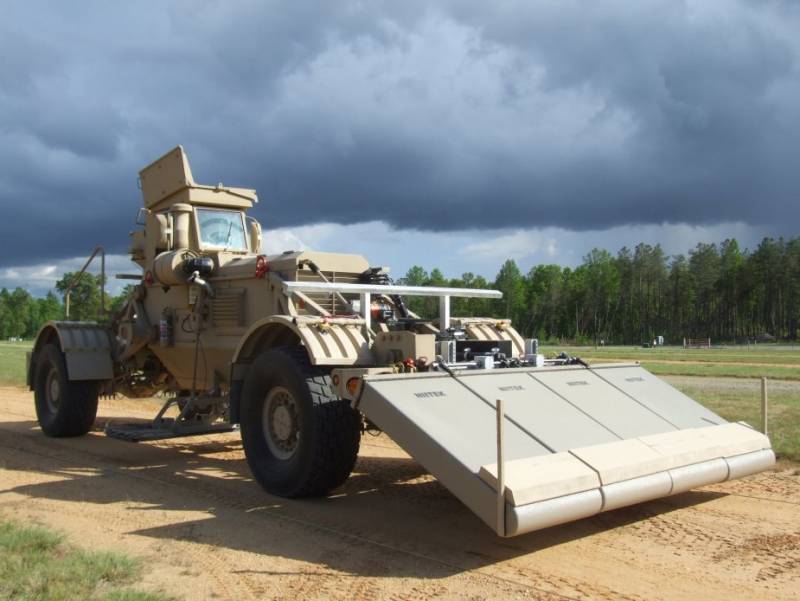 But the Husky Visor 2500 is a large and bulky machine that is not able, for example, to work in narrow streets. In addition, she is often attracted to the main job - the search for mines. The R2TD (Rapid Reaction Tunnel Detection) compact subsurface radar was developed directly for the discovery of underground tunnels by the US Army Engineering and Research Center from Vicksburg, Mississippi. It can be used both in a wearable version and installed on light equipment. The device has several sensors, allowing not only to scan the thickness of the earth with a radar, but also to determine acoustic waves, heat sources and seismic activity. In addition, R2TD “sees” underground power lines and various communication lines. In the open press, there are still no tactical and technical characteristics of a compact GPR, although it has been used in the army since 2014 of the year. It is only indicated that the manufacturer regularly updates the software of the device, since terrorist organizations constantly change both the configurations of tunnels and the ways of laying them. First of all, the Americans equipped with similar technology the locations of their troops in Afghanistan and Syria. They have a rich and full of blood история the fight against the underground warriors, which began back in Vietnam. In this regard, many American military camps are surrounded by passive soil linear sensors warning of suspicious seismic activity. Even a whole class of new “underground hunter” specialists has appeared in the US Army. Surely, in the near future we will see another patriotic film about them. 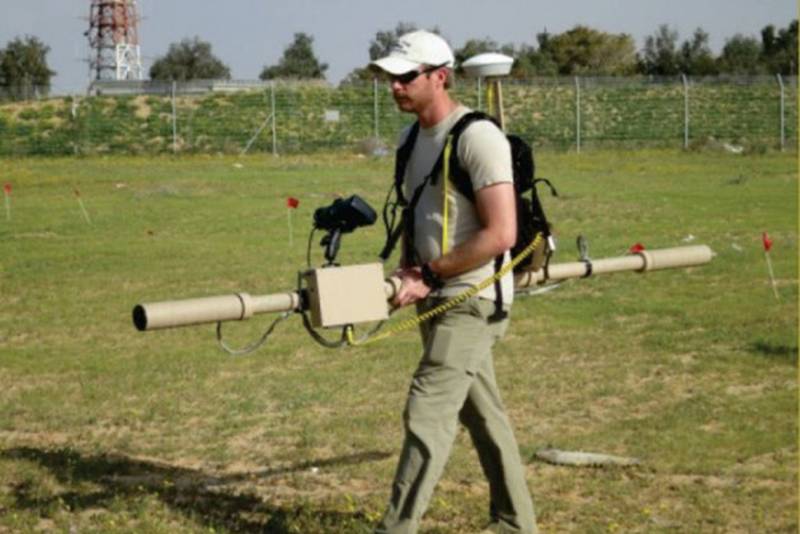 For intelligence purposes, NGI adapted the modern BuckEye complex, equipped, in addition to the optical channel, with a laser radar or lidar of the LIDAR Optech ALTM 3100 model. This unique geodetic complex can be placed both on UAVs and helicopters, providing the military with a detailed three-dimensional map with a resolution of 3 cm. Such devices have been tested and even serially produced by automobile concerns for autopilot systems for several years. Lidars are extremely expensive, but at the exit they give an excellent picture. True, they are quite dependent on weather conditions, so they are often duplicated by a radar observation channel. Americans with the help of BuckEye have already "shot" a decent part of the territory of Afghanistan, Syria and Iraq.

In the photo, a three-dimensional map of the Iraqi city of Samarra, obtained using the BuckEye complex 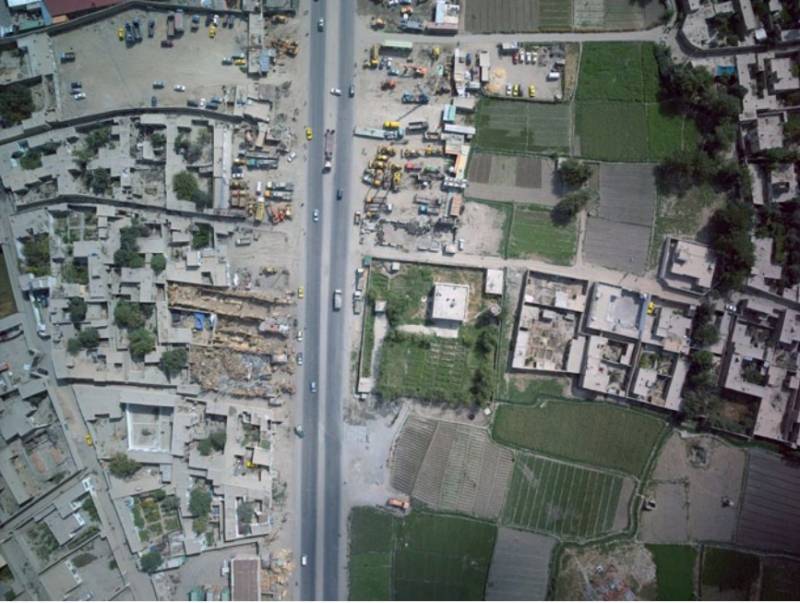 Photo of Kabul with a BuckEye-equipped UAV

The Americans are actively using expensive reconnaissance equipment - in total, since 2007 in the interests of the US Army, accurate three-dimensional maps of the territory have been collected with a total area of ​​more than 300 thousand square meters. kilometers. In Afghanistan alone, at least five aircraft operated with BuckEye. The plans for the modernization of the installation of a sensitive infrared sensor for accurate positioning of equipment and manpower of the enemy.

One of the most important areas of NGI's work is the expansion of the controlled area of ​​the globe through the involvement of partner countries. So, since 1956 of the year Five Eyes (FVEY) has been functioning, which includes intelligence services of five countries - the USA, Great Britain, New Zealand, Australia and Canada. This is a kind of global intelligence service that Snowden described as "a supranational intelligence organization that does not obey the laws of its countries." Inside FVEY, among other things, they exchange geodetic data, and also involve third countries in cooperation. As a result, all information naturally accumulates in NGI analytical centers and is used in the interests of the US Department of Defense.