Five-year sanctions - neither efficiency, nor quality

Officially, the annexation of Crimea is considered the main reason for the outbreak of the war of sanctions with Russia. But when almost exactly the same measures are applied in relation to the Skripals case or support of the Iranian atomic program, it becomes clear that the matter is still not in the Crimean spring.


Moreover, the European Union does not seem to be very confused by the prospect of the notorious energy dependence on Russia. Few people care about what Russia maintains, moreover, it is gradually strengthening its economic position in the third world, starting with Iran and ending with Latin America. And even our “turn to the East” with the possibility of turning Russia into one of the main players in intercontinental transit is unlikely to raise any serious concerns from the West. 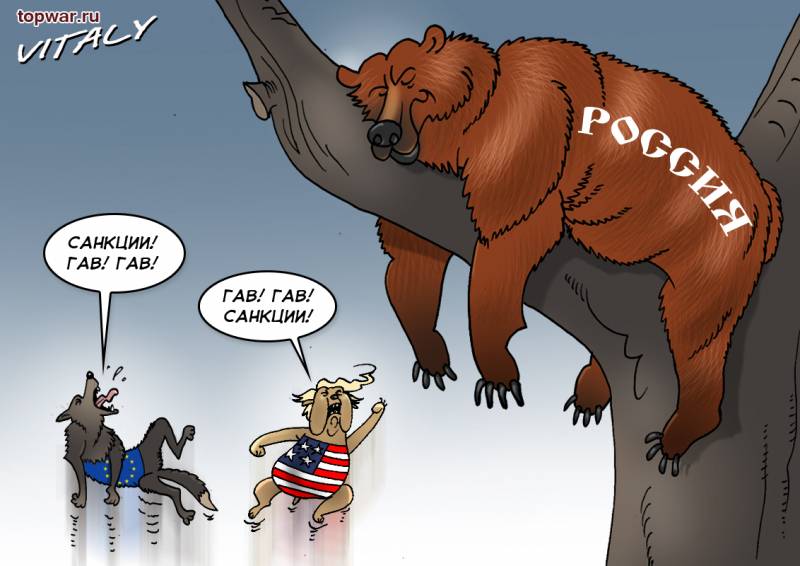 Apparently, sanctions cannot even be seen as an instrument of long-term economic pressure on a potential competitor. Indeed, for example, China, although it had Hong Kong on its own head, was declared a trade war long before the current protests.

Often it seems that in an environment where lovers of liberal values ​​rule, it becomes simply fashionable to sculpt the "image of the enemy" from anyone who is in no hurry to accept them. And it doesn’t matter if it is China, Iran, or the equally unshakable Russian Federation in political terms.

As a result, a whole series of attacks on the most important sectors of the economy, on state banks, and even on personalities, did not give almost anything. Yes, someone spoiled a lot of blood, somewhere the business is completely broken, but in general the results are scanty.

Yes, adapting to sanctions is not easy at all, but for a number of industries it was they who became the incentive not only for a serious revision of priorities, but also for building much more sustainable business models. Entire sectors of the real economy, which overnight got rid of competitors, received an unexpected chance to gain a foothold in their own market, as well as promote their products to places where no one cares about sanctions.

In this sense, there is a special discussion about the agricultural sector, although its elected representatives almost exclusively benefited from the response. And it is from the real economy that one can hear confessions today, such as: “if there were no sanctions, they had to be invented.” Many are not seriously afraid of the lifting of sanctions and the food embargo.

At the same time, most Western politicians, among those who are not inclined to constructive dialogue, continue to keep the mark, alternately tightening or softening anti-Russian rhetoric. Ordinary PR, so far triggered, but requiring regular heating. 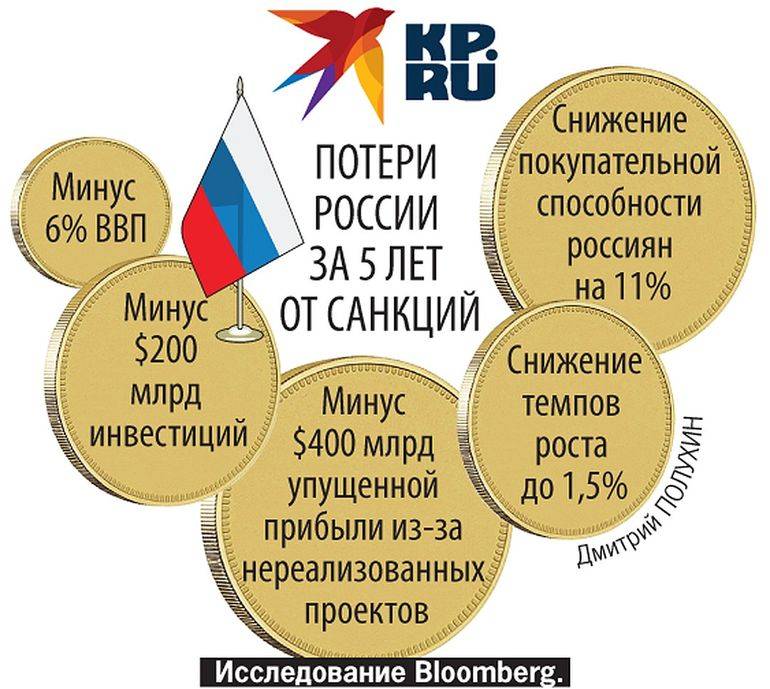 It was in Soviet times that the five-year plan of efficiency and quality was to be such not only on paper, but also in reality. It turned out you yourself know how - after such a five-year period, a great power has slipped into final stagnation. With Western sanctions it turns out about the same.

Five years later, the Russian economy, which, according to the last two American presidents, had long been “torn to shreds,” continues to function. Not too dynamic, but mostly uninterrupted. Surprisingly, it is precisely those sensitive areas where the most powerful blows seem to have been the most stable. 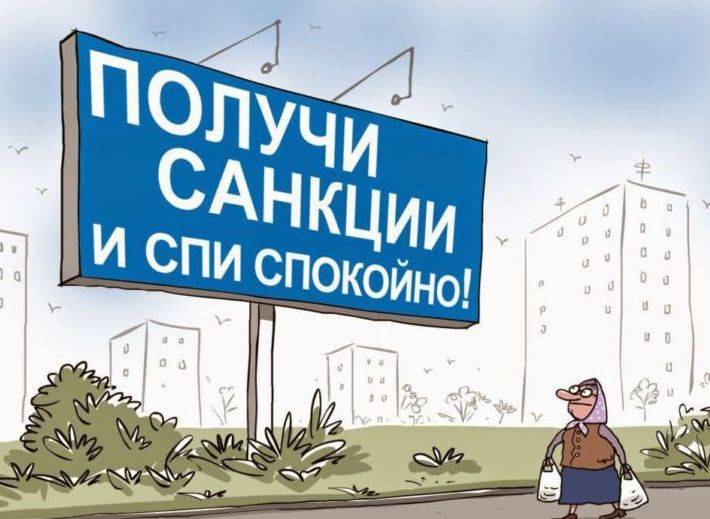 And if the stable state of public finances can somehow be justified by an extremely tight monetary policy and limiting the growth of household incomes, then what is the secret to the well-being of the banking sector. Even if very relative well-being?

Yes, much in this area also rests on state support - the largest credit organizations in Russia have a very significant share of state capital. But after all, they have to work mainly with private business structures and ordinary citizens.

In fact, all measures taken against Russia were initially temporary. Either until the return of Crimea to Ukraine, or until the implementation of the Minsk Agreements, although the West continued and continues to keep Crimea, like nevermind in your pocket. What obligations Moscow must assume for the same Donbass or the Skripals family is practically impossible to understand. And accordingly, what “get the deadlines”, too.

No signs that anyone has moved towards the lifting of sanctions are visible even on the horizon. Most likely, all this is for a long time, if not forever. Today on the agenda, it seems, is another tightening of US sanctions. And this is an occasion to recall what made us happy over the past five years and what it currently turns into. 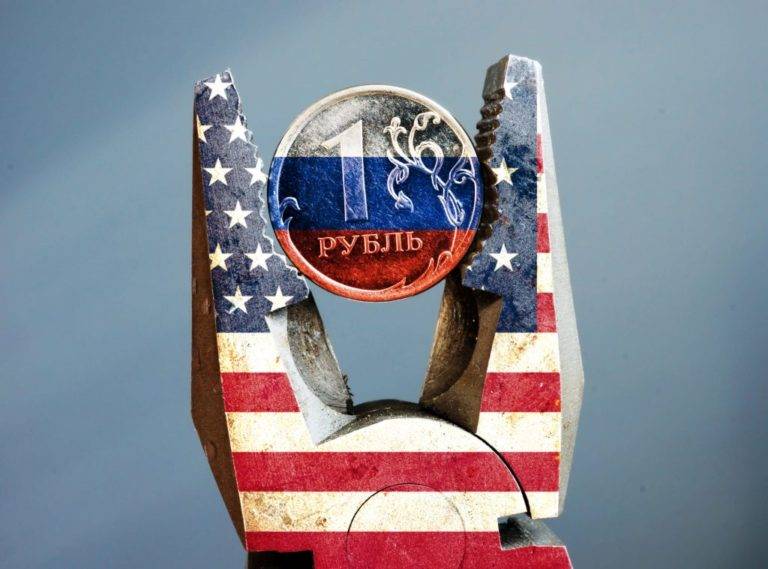 So, it all began in March 2014 of the year with a package of sanctions that personally concerned individuals and companies. Then restrictions were introduced in relation to entire sectors of the Russian economy.

Over the next two years and to date, sanctions have been tightened, spreading to an increasing number of companies and individuals, and have also been extended more than once. All sorts of restrictions and exemptions took place, but they did not carefully advertise on both sides. Not bad PR in sanctions and counter-sanctions, it seems, both of them.

Our answer to the gentleman

The Russian "otvetka" in the form of a food embargo did not slow to wait. The list of products that fell under the ban immediately included meat and dairy products, fish, vegetables, fruits and nuts imported from the EU, USA, Australia, Canada, Norway and others.

However, the rapid breakthrough of the agricultural sector in the end did not work. Indeed, instead of powerful additional financial support, he was forced to confine himself to removing not the most dangerous competitors. Much of what was bought in Europe cannot be produced in Russia at all, and a replacement was immediately found in Asia and Latin America - and a replacement, as a rule, is not of such quality, although cheaper. 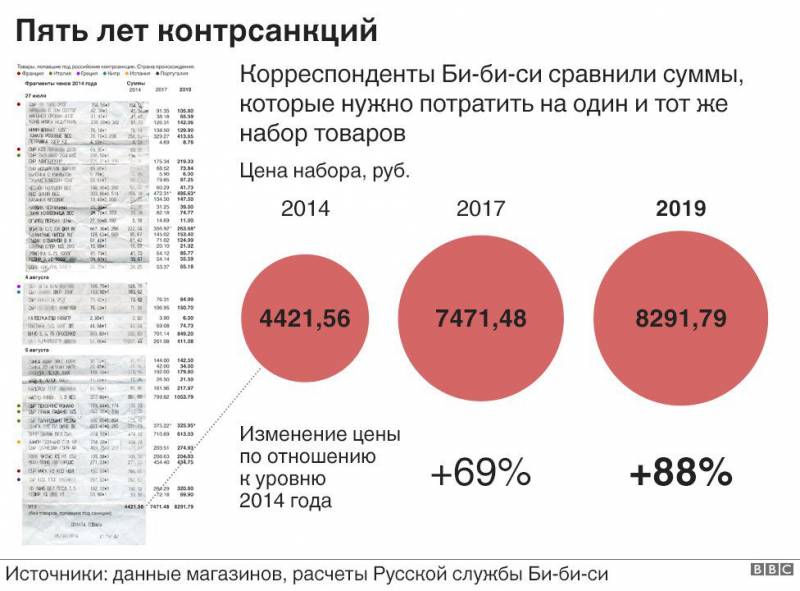 In parallel, re-export and smuggling flourished. Not always high-quality, and not always cheap “sanction” began to come from anywhere, right up to a union Belarus. Well, natural products began to be squeezed out by various surrogates. Moreover, the worst part is that those sectors that competed well with foreigners without an embargo turned out to be affected in Russia.

For example, palm oil poured into the dairy industry. Winemakers were literally filled with poor raw materials, and brewers with hops and malt, which are suitable only for outright fakes.

Our answer in the financial sector turned out to be somewhat more intelligible, where the course on de-dollarization was immediately taken. Quite expectedly, this prompted the US Federal Reserve to lobby for sanctions against Russia's public debt. Despite this, our sovereign Eurobonds today, as before the sanctions, are traded with deviations within the 170-250 basis points from the reference value.

With ruble bonds, when inflation is clamped to the limit, the situation also remains quite stable. Almost a third of them are in the hands of investors after, because of the high profitability, they were very actively bought. Shares of leading Russian banks, primarily Sberbank, look quite good on the markets both domestically and abroad.

And yet it’s not worth it to deceive yourself. For five years, Russia has not just been pushed aside G-7, which once seemed to have become G-8 for good, it was essentially driven to the side of the global financial system. Russia is virtually deprived of the opportunity to borrow abroad - even Chinese banks do not violate the sanctions regime.

However, this situation is rather stalemate than matte. It does not lead to a win, but it remains virtually a win-win. It should be considered good that international banks that remain on the Russian market manage not only to maintain, but to gradually increase the share of Russian assets in their portfolios. 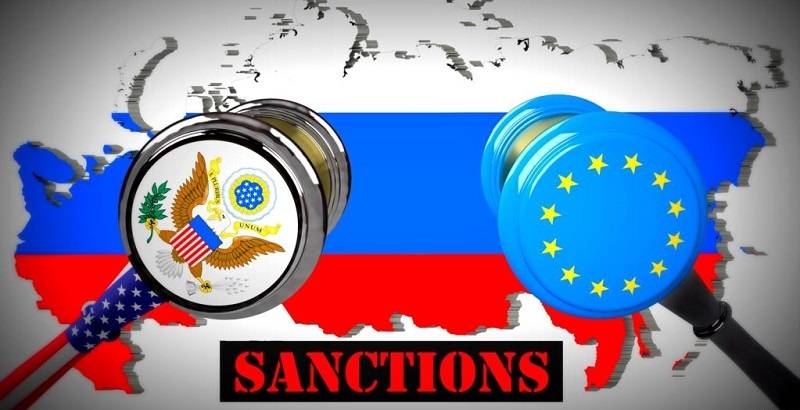 Our banks were torn from the “Western feeder” with cheap and long money, but in return they went on unprecedentedly large purchases of Eurobonds in hard currency. The five banks Sberbank, VTB, Gazprombank, Russian Agricultural Bank and Vnesheconombank (VEB) forked out for this immediately at 35 billion dollars. And even after that, at least someone from the Ministry of Finance and the Central Bank will say something more about the deficit of available funds in the country and about the problems with the allocation of funds from the National Welfare Fund.

Interestingly, in parallel with the repayment of old foreign debts, our state lenders are also actively engaged in the de-dollarization of loans. Now ruble debts in Russia make up at least two-thirds of the total debt burden, which indirectly provides additional stability to the national currency. For this, the organizers of sanctions should generally say a special thank you.

After five years of sanctions, our banks continue to be threatened by almost any sanction risks. And concerning not only Russia, but also the same Iran or Venezuela. It cannot be ruled out, for example, the same blocking measures that American congressmen continue to discuss. Moreover, the majority of politicians and legislators are still supporters of continuing the policy of sanctions against Russia.

Nevertheless, more recently, the “war of sanctions” between Russia and the West was assessed by most experts as potentially endless. But now, not only individual Western politicians, but even US authorities regularly speak about the possibility of making some cardinal decisions in the foreseeable future. According to media reports, we are talking about both the abolition and limitation of the validity of certain personal or sectoral sanctions.

However, for now - in the near future, we are waiting for another batch of “scarecrows” relating to our government securities. This measure, fastened to the long-suffering Skripal family, once again reduces their reliability, and also once again leads to an increase in their profitability. Although this yield still almost does not lead to a significant increase in demand.

One thing is safe to say - the taboo that is about to be imposed on new purchases of Russian government bonds will certainly work. But since it is addressed to American investors, it will primarily concern them. Just one basket in which you can lay investment eggs, they will have less. And even with further sanctions, it is unlikely that anyone seriously hopes to cause a comprehensive financial crisis in today's Russia.