Jet motorcycle and flying board: special vehicles for special forces

August 21 2019
42
Humanity has always sought to expand the boundaries of its capabilities. Due to the desire of a person to swim underwater like scuba diving and submarines appeared, thanks to the desire to fly like birds appeared balloons and airplanes. Over the past XX century, a huge number of ideas have been generated to create various vehicles. Some of them have become reality, some still remain only on the pages of fantastic works. 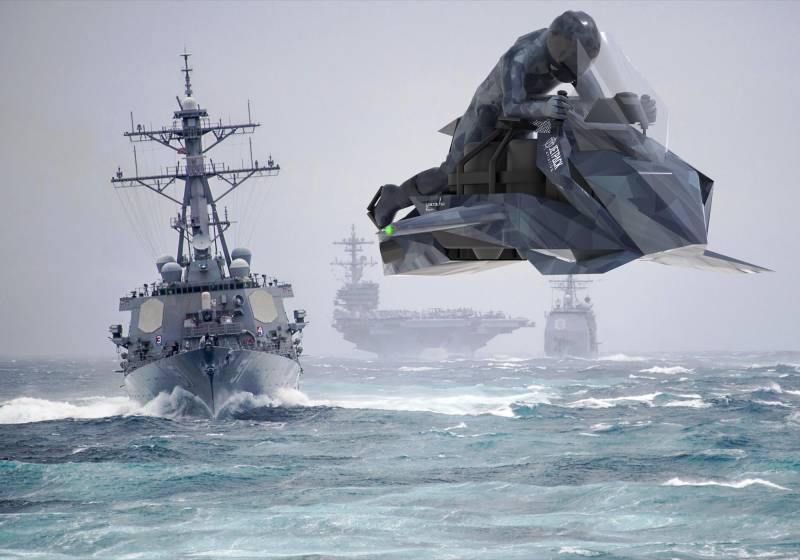 It was fantastic literature that gave the world such concepts as a flying motorcycle - a hoverbike, a jetpack - a jetpack and a flying board - a hoverboard. Despite numerous attempts, in the XX century, none of the above vehicles came out of the prototype stage and was not implemented in any finished form. 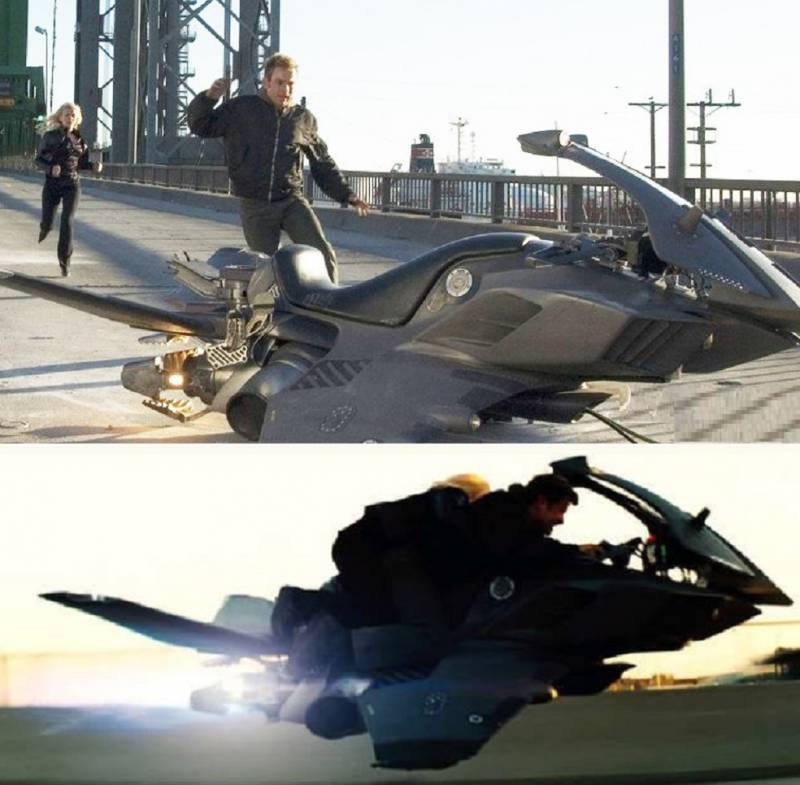 Hoverbike from the movie The Island

In the 21st century, advances in electronics, sensors, compact and powerful electric motors have allowed us to return again to the idea of ​​creating personal aircraft.

The greatest success in creating the “flying board” was achieved by the French athlete and inventor Franky Zapata and his company Zapata Industries. In 2005, Zapata Industries introduced the Flyboard flying platform - a powerful pump pumps water through a flexible pipe, connected from a jet ski, which is thrown down with force, allowing the pilot to fly at a height of up to 16 meters. The Flyboard flying platform is designed for entertainment and sports, however, many solutions have been worked out on it, which later made it possible to create more advanced products. 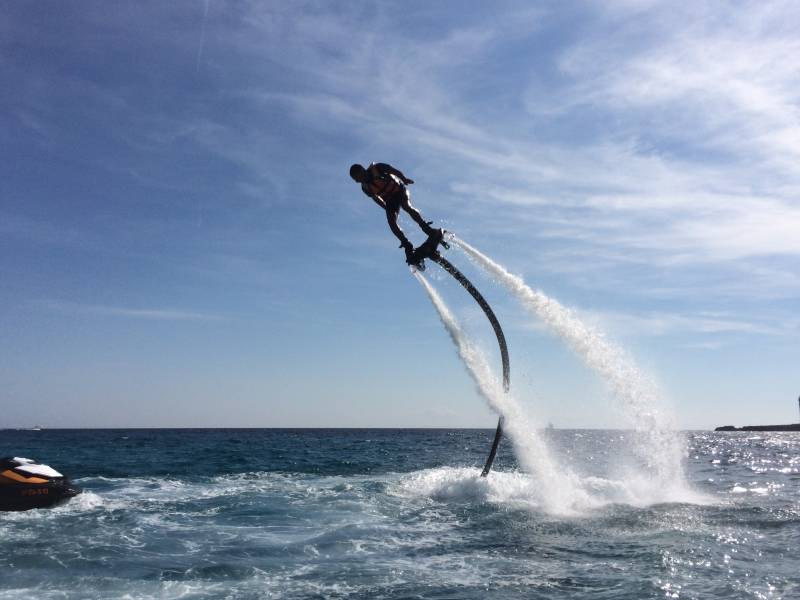 
Zapata Industries' most breakthrough model was the Flyboard Air hoverboard. With its own weight of 25,1 kg, the Flyboard Air carrying capacity was 102 kg, the maximum flight speed is 150-195 km / h, and the maximum ceiling is 1524 meters. 23,3 liter fuel tank capacity, 10 flight duration min. In 2016, the Flyboard Air set a record officially registered in the Guinness Book of Records, the flight range was 2 kilometers 252 meters, covered in 3 minutes 55 seconds.

Franky Zapata and his Flyboard Air

The Flyboard Air propulsion system includes four jet engines powered by jet kerosene. Fuel comes from a tank placed in a satchel behind the pilot's back. Each engine produces about 30 kg of thrust, with a dead weight of 3 kg. In addition, the platform is equipped with a pair of additional inertia propeller motors with low inertia, to ensure quick response of the control system. The control system is another important element of Flyboard Air; it compensates wind gusts, weight redistribution due to pilot movements, fuel consumption, engine irregularities with high speed and accuracy and stabilizes the flight of Flyboard Air.

At a military parade held in Paris on the Champs Elysees in honor of Bastille Day, the Flyboard Air hoverboard with a pilot armed with a rifle (or its imitation) participated, which emphasizes the interest shown by the military in this technology. 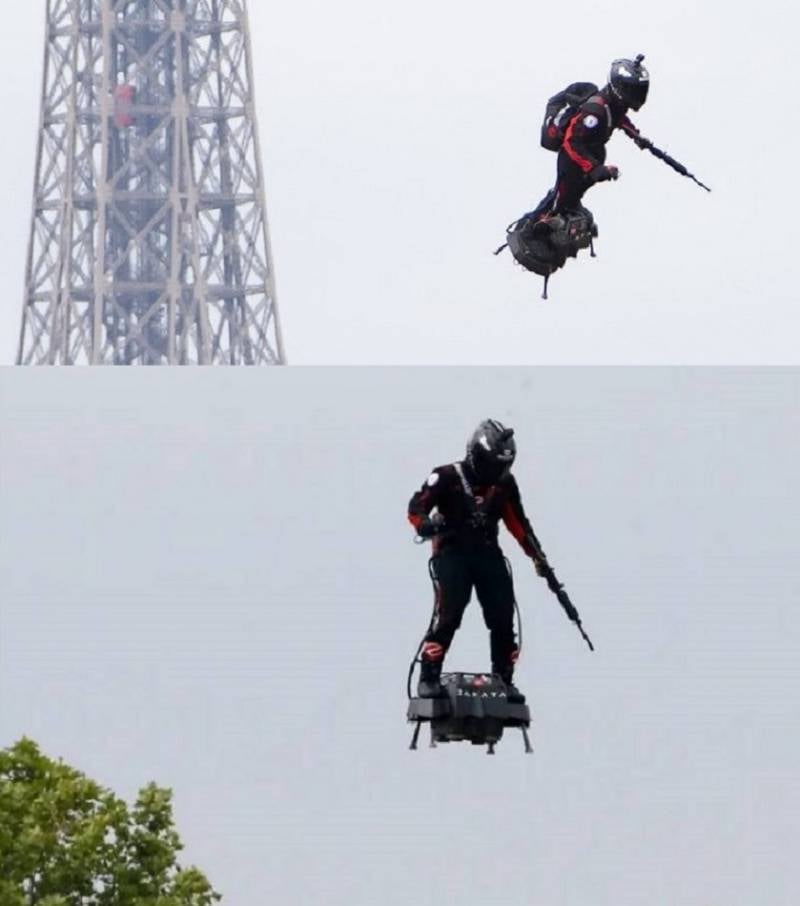 Flyboard Air at a military parade in the sky over Paris


In what quality can hoverboards in the armed forces be claimed? If someone represents a flock of mobile foot soldiers attacking the enemy on flying boards, then most likely he will be disappointed. At the moment, hoverboards are still cumbersome, difficult to manage devices, and their flight time is extremely limited.

However, there are certain tactical situations where hoverboards may not only be useful, but even irreplaceable.

First of all, we can talk about conducting special operations, for example, to storm buildings, release hostages, etc. In this case, the use of hoverboards will allow you to refuse to use helicopters for landing on the roof of buildings. Hoverboards are delivered to the place of the special operation by road, after which the combat unit can carry out a throw on the roof of the building with the necessary weapons within a few minutes. Among the advantages of this solution, we can name the opportunity to assess the situation on the spot, choose a non-shooting sector for casting, taking into account the architecture of the building, the ability to quickly retreat if necessary.


Helicopter exit to the point, special forces landing (from the seventh minute). In this situation, the strike group could carry out hoverboards from the end of the building, where it is necessary to control only one window

As another example, we can consider the conduct of hostilities in urban areas. In this case, hoverboards can be used, for example, to drop snipers onto a tall building, while all the passages in the building can be mined. Or they can be used to enter the rear of the position defended by the enemy, "jump" over an obstacle.

Also, a hoverboard can be used to occupy the dominant heights in the mountains. Here it is necessary to make a reservation that this will depend on the height to which he is able to rise relative to sea level. According to some reports, the flight height of Flyboard Air can reach 3000-3500 meter, which is already comparable to the flight height of some helicopters. If the enemy has taken an advantageous position that impedes his “head-on” attack, while other areas are difficult to navigate, a maneuvering group on hoverboards can take a position that is more advantageous with respect to the enemy’s position.

It can be argued that the hoverboard pilot is extremely vulnerable in flight, but in fact he is no more, but rather even less vulnerable, than the pilot of a light helicopter. Minimizing the likelihood of a pilot's defeat should be ensured by the suddenness of its use (there is no flying time, like in a helicopter, when it can be detected from afar by the sound of the engines) and by a short flight time, actually a jump. And getting into a small moving target is not as easy as it seems at first glance.

In any of the scenarios, the hoverboard is not regarded as a platform for warfare, but only as a highly mobile means of moving over short distances in specific tactical situations.

In an unmanned version, the hoverboard can be used for delivery weapons and ammunition to a locked battle group.

One of the most interesting and supposedly close to realization concepts is the Jetpack Aviation Speeder jet motorcycle. Equipped with four jet engines, Speeder will be able to reach speeds of more than 240 km / h and rise to a height of 5000 meters with a load capacity of 115 kg. Initially, jet engines are planned to be located in the central part of the structure, but this can make driving more difficult and require the introduction of complex autonomous stabilization technologies, so in the future the turbines can be moved closer to the edges of the casing.

The flight time will be about 30 minutes. Is it a lot or a little? Given the declared maximum speed, it is about 100-120 km. It is enough to fly to a country residence, bypassing city traffic jams. Jetpack Aviation has already begun accepting pre-orders for Speeder. The cost of booking a place in the queue is 10 thousand US dollars, and the total cost of a flying motorcycle will be 380 thousand dollars. The first batch will total 20 machines.

The possibility of creating a military version of a jet motorcycle is also being considered. It will have five engines instead of four, the maximum load capacity will be increased. 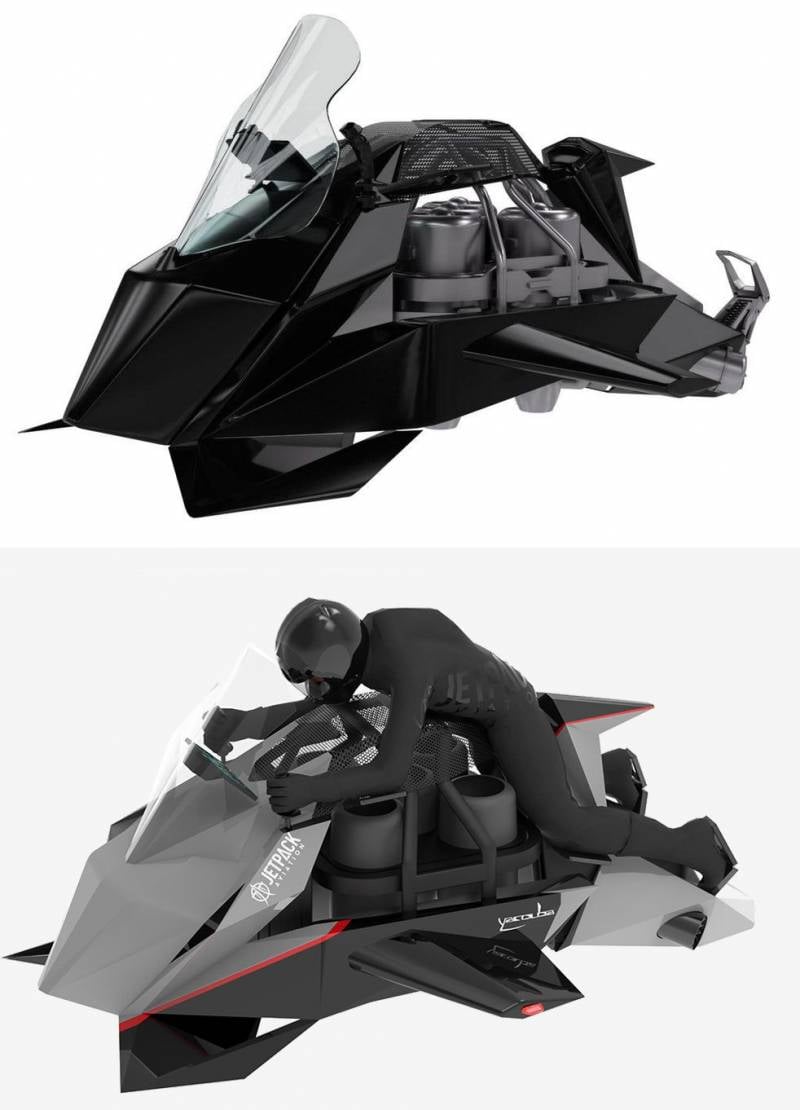 Another model of a hoverbike, developed earlier by the Russian, and now by the American startup Hoversurf, has more modest characteristics. Hoversurf company was founded by St. Petersburg Alexander Atamanov and registered in California in 2014 year.

His flying Scorpion motorcycle got a carbon fiber frame, which weighs less than 114 kg, a hybrid lithium-manganese-nickel battery that can provide 10 to 25 flight minutes depending on the weather and weight of the pilot. In remote control mode, the flight time will be 40 minutes. Hoverbike Scorpion can fly up to 16 meters above the ground, reaching a maximum speed of 96 km per hour.

Despite the more modest performance compared to the Jetpack Aviation Speeder jet bike, the Scorpion hoverbike is significantly closer to implementation. Pre-production prototypes are shown, a purchase order is also open - the price of a hoverbike will be Scorpion 150 thousand dollars. Hoverbike Scorpion is classified as an ultralight vehicle that allows you to fly to the United States without a pilot's license. 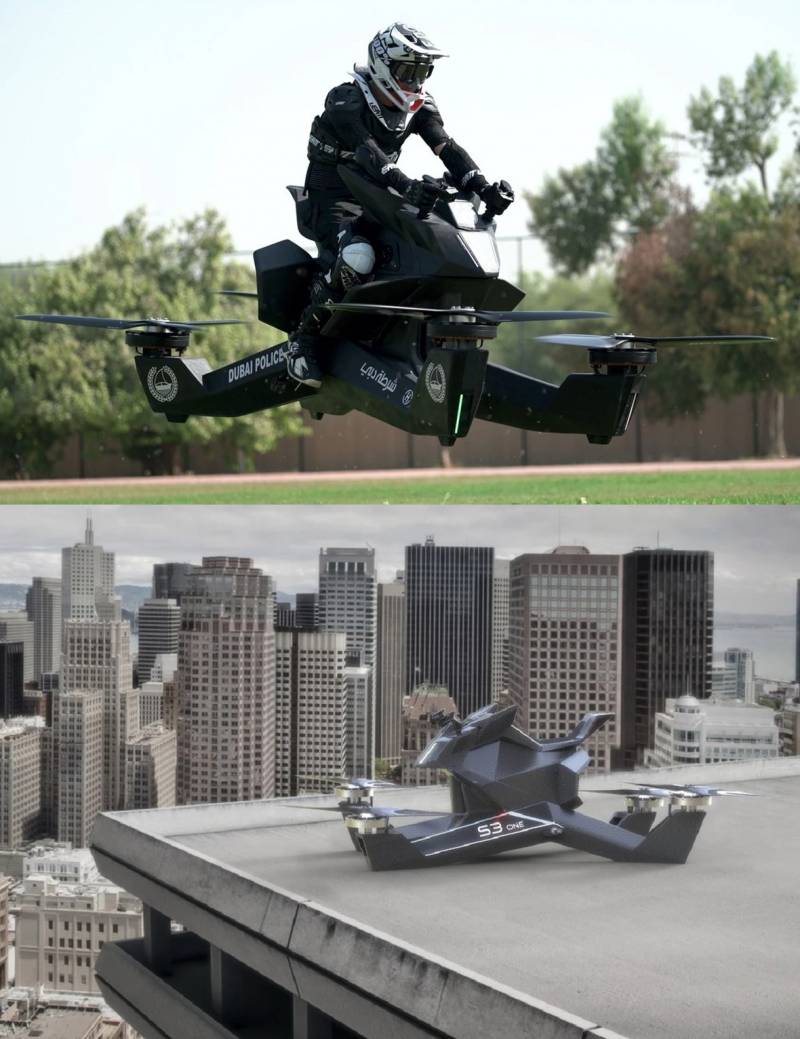 Hoversurf plans to release other types of similar aircraft for civilian and special applications. 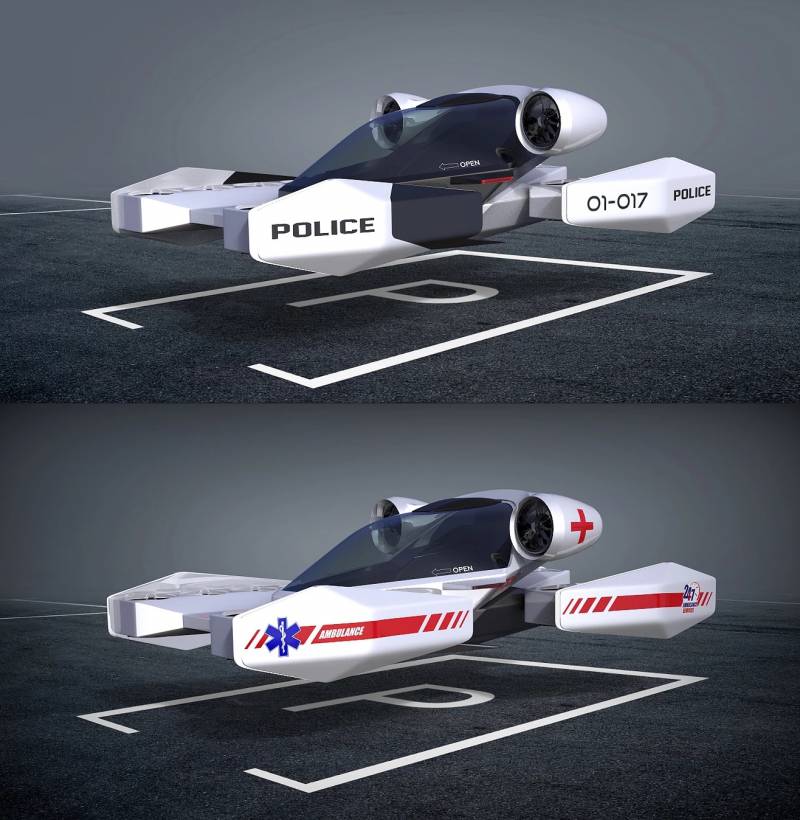 Looking at this and other projects that “escaped” from Russia, I want to say that the leadership of our country should reconsider its approach to high-tech domestic startups. Otherwise, all that remains then is proud to say that the US helicopter industry was founded by a native of Russia, and to recall numerous other similar examples.

How can hoverbikes be used by military and special units? As in the case of hoverboards, hoverbikes are hardly worth considering as military vehicles designed to deliver air strikes against the enemy, although their further use cannot be completely ruled out.

First of all, hoverbikes can be used for prompt delivery of special forces. In the event of a terrorist threat, the score can go on for minutes. Procrastination will allow terrorists to equip firing points and install mine-explosive devices. At the same time, the congestion of city highways does not allow special vehicles to quickly advance to the necessary positions. Hoverbikes will provide special units with the highest response speed to threats that cannot be provided by any other type of vehicle.

They can perform a similar function for ground units of the armed forces - to quickly provide assistance, to transfer arms and ammunition as quickly as possible over a distance of about 100 kilometers, to advance to positions and take them ahead of the enemy. Moreover, in the future, the hoverbikes can return to the base in autopilot mode so as not to additionally unmask the fighters. Or vice versa, in unmanned mode, advance to the indicated point and ensure the evacuation of the ground unit.

The most important area of ​​using hoverbikes can be their use by doctors to provide emergency medical care to both civilians and the military in case of injuries. For many types of diseases or injuries, the count is not just minutes, but seconds.

How true the proposed scenarios for the use of hoverboards and hoverbikes will be shown by time, but now almost all the developers of this type of aircraft provide for the possibility of their military and special use. With a high probability these types of aircraft will be in demand not only in the civilian market, but also as vehicles of the armed forces and special forces.

Ctrl Enter
Noticed a mistake Highlight text and press. Ctrl + Enter
We are
JB11 and Flyboard Air: customized aircraft for armiesIn England, created an unmanned aerial motorcycle from Star Wars
42 comments
Information
Dear reader, to leave comments on the publication, you must to register.