August 22 2019
64
Dedicated to Victoria. The person who pushed the author to search for materials about the beginning of the war


In the previous installment, we started exploring intelligence materials (Goals Difference) on the grouping of the enemy, concentrated against the troops of the Zapovo. Therefore, we first finish our discussion of this topic. In accordance with the RM of the Reconnaissance Directorate of the General Staff of the spacecraft, from the middle of May until the outbreak of the war, there was no increase in the German group against the ZAPOVO. In June, echelons and convoys of troops and equipment were moving somewhere intensively, but the number of divisions remained unchanged against PribOVO, KOVO, OdVO, and ZAPOVO. Let's try to figure it out. 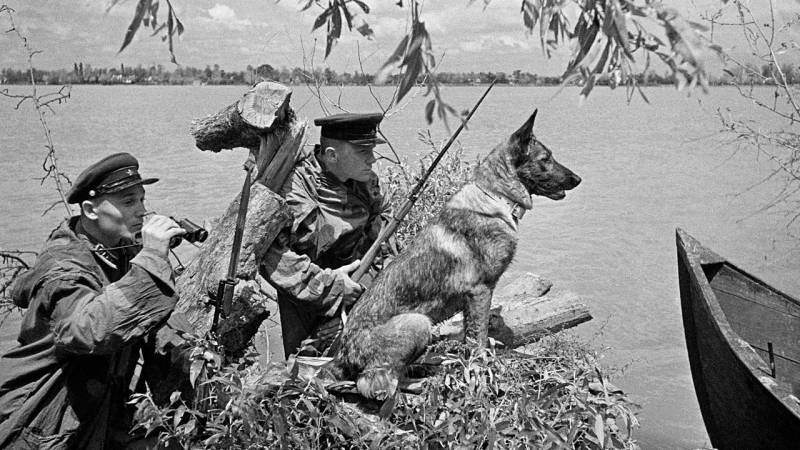 In the previous part, we examined the map of the ZAPOVO headquarters with the situation of the location of German troops as of 21.6.41. Previously, we examined a similar map of the PribOVO headquarters with the situation on June 21. A comparison of the data on the map with the information from the intelligence report of the headquarters of PribOVO from 18.6.41 was carried out. Readers could verify that the information given in both documents coincided.

There are no RM ZapOV headquarters publicly available on the Internet for free, similar to the detailed summary of PribOV headquarters indicated. Therefore, we compare the data on the map with the data on the deployment of German troops as of June 1.
Data on the deployment of German troops as of June 1 was first summarized in the intelligence report of the General Staff Intelligence Directorate on May 31.5.41, 5. This information was given in more detail in the appendix to Summary No. 15 (for the West) issued by the Intelligence Directorate on June XNUMX. The figures below show data from the above summary in the ZAPOVO's area of ​​responsibility. The following abbreviations were used in the figures: AK - army corps, ap (tap) - artillery regiment (heavy artillery regiment), zenap - anti-aircraft artillery regiment, cd (kp) - cavalry division (regiment), md (mp) - motorized division (regiment), pa (pp) - infantry division (regiment), td (tp) - tank division (regiment).

One of the enemy’s farthest from the border was in the Lodz region. In the summary of the General Staff Intelligence Directorate of 31.5.41, it was noted that “The Germans set about creating operational depth, concentrating ... west of the одód линии line, Krakow - 6-8 divisions”. In June, information about this grouping is no longer found. However, an increase in the groupings of German divisions against the troops of PribOVO, ZAPOVO and KOVO from the beginning of May to the middle of May of the 1941 year and until the outbreak of war did not occur. Consequently, the group in the Lodz region should have remained in place. If she was there at all ...

The group in the Bartenstein, Allenstein, and Bischofsburg districts was in the disputed area of ​​responsibility of ZAPOVO and PribOVO. A small part of the troops during movements was tracked by the intelligence of PribOVO. An even smaller part "settled" in East Prussia.

In the following figures, instead of indicating the location of many military units and some divisions, the text will often be enough: "no data". Do not let this phrase bother you, since towards the end of the part you will come to a shocking conclusion ... 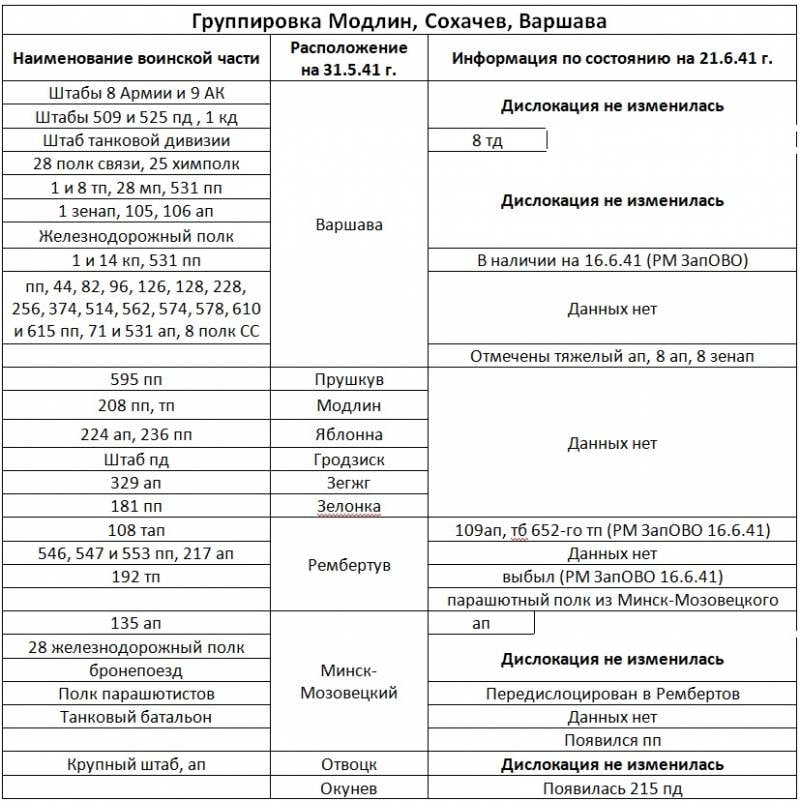 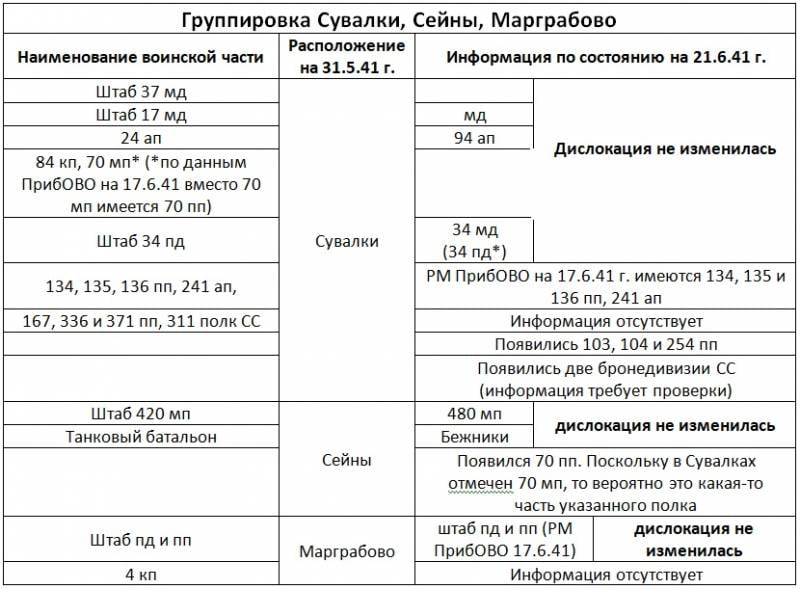 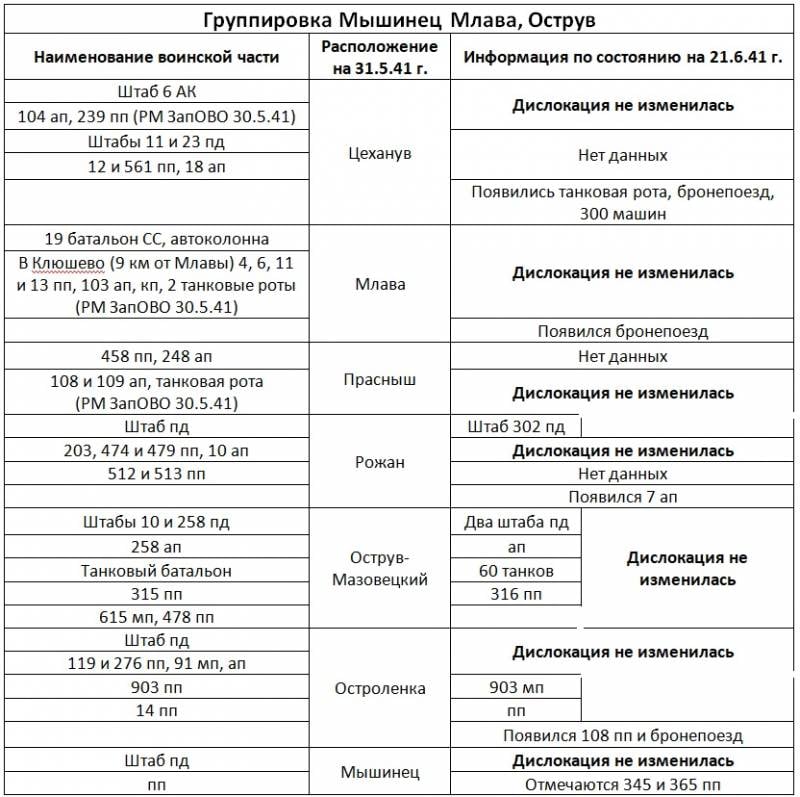 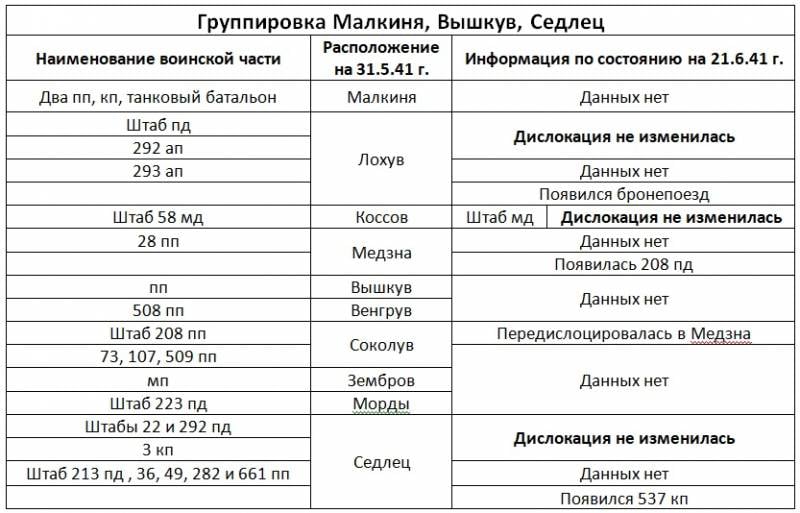 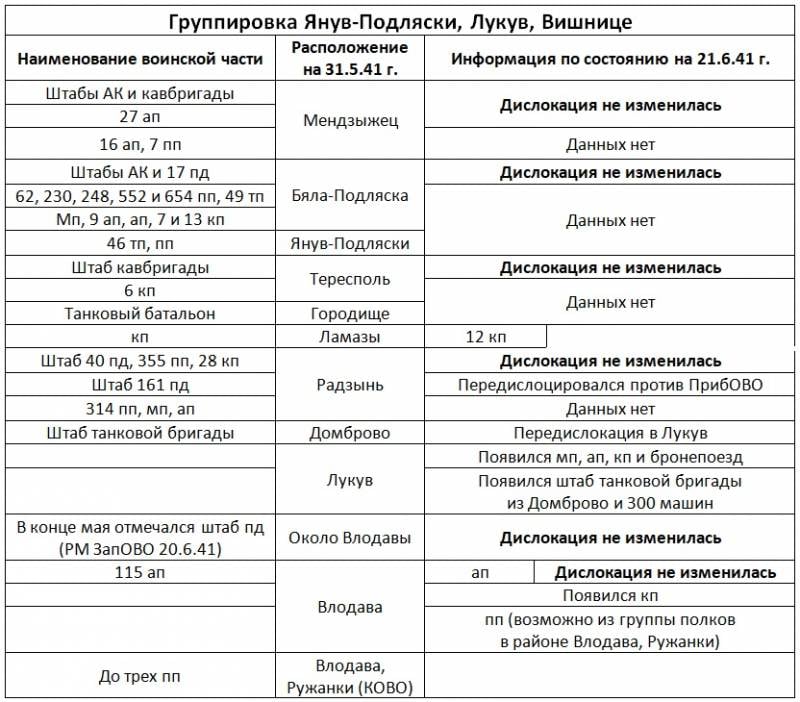 It can be seen from the figures that, according to intelligence, many enemy troops were in places that were noted in the 31.5.41 intelligence report. The author will take the liberty of declaring that this is an overwhelming number of troops, which you will soon see for yourself.

In other words, three weeks before the war, German units and divisions did not move as often as indicated in the Republic of Moldova. And again, there are no discovered headquarters of army groups and tank groups, tank and motorized troops! About these formations we will consider the materials in the next part ...

Another way to gather intelligence

You have already examined eight figures with fairly accurate data on regiments and divisions. Nothing confused you? Having no sources at headquarters and next to them, our intelligence knows everything for sure! Where from ?! Really the German military men went with posters so that our intelligence would not let them through? Exactly! The second way of collecting intelligence was carried out visually on the shoulder straps of German troops. It turns out that by shoulder straps it was possible to determine the membership of servicemen in regiments and headquarters of divisions. Even the headquarters of the corps and armies, but the author will not consider these headquarters. Below are photos of German epaulettes from the war of the 40's.

Special message:
... June 8 at st. Terespol arrived and there was a group of soldiers in the amount of 25-26 people, on shoulder straps who had the number 709 (information obtained by personal observation of our ... agent) ...

Special message:
... Data on the deployment of 1, 56, 66, 98 and 531 points in Warsaw No. 711 received on epaulettes, there are no numbers on epaulettes - they are cut, but the prints on them remained. He saw such soldiers with numbers in the ranks from a company passing through the city.
The 17 settlement in Vyshkov is also identified by its controversial numbers; moreover, it was specified in conversations with the population. 537 pp has not yet cut off the numbers on uniform and continues to wear them, in addition, the whole Island knows about him that he arrived from the Greek front.
50 pp was established in conversations with the population, and No. 711 himself saw soldiers with prints on the uniform of No. 50 before the company. 719 nos. 703 is established in conversations among the population, the place of deployment of its headquarters was personally established by No. 703 ...

Did the German command know that it was easy to establish the identity of their troops by numbers on uniform? Of course she knew and was obliged to use this fact in an extensive disinformation operation launched at all levels!
In Warsaw, several months before June 21 (inclusive), our intelligence regularly tracked the 8 Tank Regiment. Probably his soldiers and officers were also identified by shoulder straps and conversations with the population. Only this regiment was part of the 15-th Panzer Division, which since April 1941 was sent to Libya at the disposal of the German African Corps ...

Maybe in the border areas there were no other divisions and regiments? Maybe German military fictitious formations were created, which our intelligence took for real? The author conducted an analysis of all regiments and divisions (except for artillery regiments - I apologize, but they are too difficult to track).

Let us consider only those German infantry divisions with numbers known to our intelligence that disappeared without a trace from the territory of former Poland (in the zone of responsibility of ZAPOVO and PribOVO) after the beginning of June. These are divisions from the above drawings with modest text: "no information".

A similar picture is observed among the missing infantry regiments. A total of 52 regiments disappeared, of which 37 (71%) were also not in the zone of responsibility of ZAPOVO and PribOVO.

33% linden divisions and 29% linden regiments. Something numbers are quite close to the number 30% ... Can't you find?

The above regiments and divisions regularly depicted groups of German troops before our intelligence. There were rumors about them among the population, and when the German troops began to move intensively to the border, these dummies simply disappeared. They were replaced by new divisions that arrived in completely different places. New divisions that were not opened by our intelligence ...

Sufficiently “accurate” data on the deployment of German troops served as an illusion of omniscience and confidence in the control of the situation with the spacecraft command ...

The figures below show the numbers of infantry divisions and regiments that were discovered by intelligence agencies of all levels and departments of the Soviet Union and the actual numbers of military units by June 22 at the borders of ZapOVO and PribOVO. Matches in both tables are marked in red. 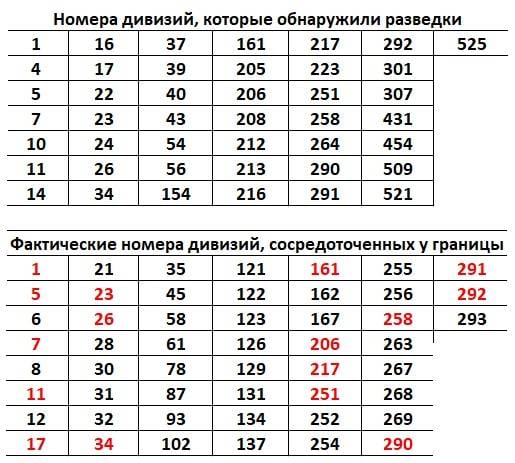 Of the 51 infantry division, available by 22 June against the troops of ZapOVO and PribOVO, our intelligence revealed only 16 (31%) It is possible that the German generals did not dare to show only misinformation ... They had to "merge" the real formations. Or sometimes rumors turned out to be true ... 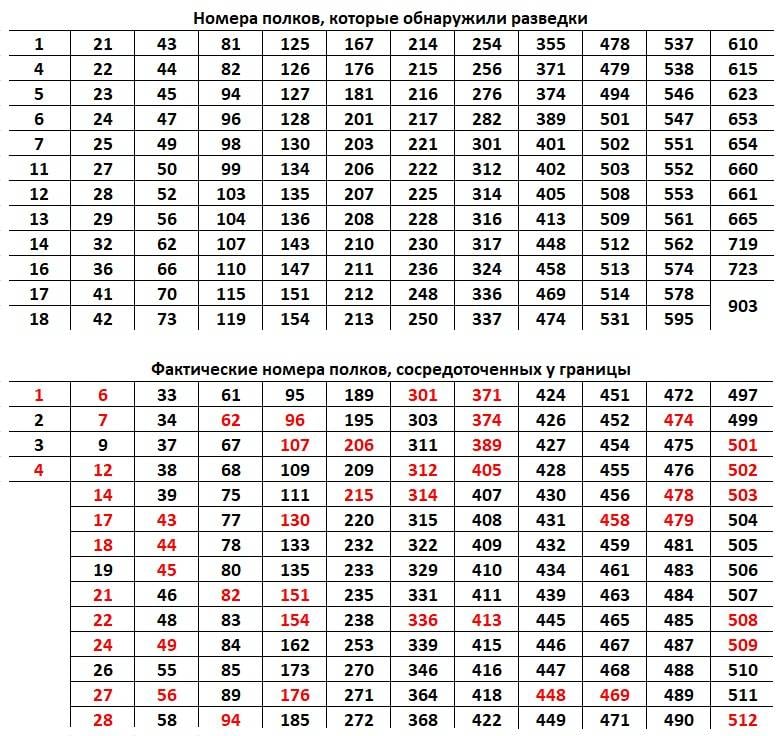 According to RM, the numbers of 143 regiments were determined. In fact, at the borders of ZAPOVO and PribOVO there were 158 regiments. Matched numbers of 50 regiments (32%) Probably the number of formations that were allowed to be revealed to Soviet intelligence by the German command was determined by the value of the order of 30% ...

On the eve of the war, the tops of our intelligence realized that they were "being led by the nose", but it was already impossible to correct the situation. Headquarters of all levels are used to the fact that they "know everything" about the enemy and control the situation ...
In the same way as they used to use wired communications for exercises and did not know how to transmit short messages on the radio ...

Special message 16.6.41:
... The deployment of parts of Warsaw, marked on shoulder straps and conversations of local residents, is doubtful and requires careful verification ...

In the next part, we will again plunge into the analysis of the Republic of Moldova, which until now has not been carried out by any author or historian. We will consider the enemy cavalry, rifle and tank units. Stay tuned: it will be even more interesting further ...