The best military historical museum of Russia and its history

Currently militaryhistorical The Museum of Artillery, Engineering and Signal Corps (VIMAIViVS) is located in the historical part of the northern capital in the so-called Kronverka - auxiliary fortification of the St. Petersburg (Peter and Paul) Fortress. Translated from German, Kronverk means “crown reinforcement” and the structure is indeed a bird's eye view very much like a royal headdress. The main task of Kronverk was to protect the Peter and Paul Fortress from the Swedish attack from the north, however, none of these fortifications managed to take part in the hostilities. True, there is an opinion that in 1705 the Swedes tried unsuccessfully to seize the newly built Peter and Paul Fortress and this episode was the impetus for the construction in the northern part of the earth Kronverka. 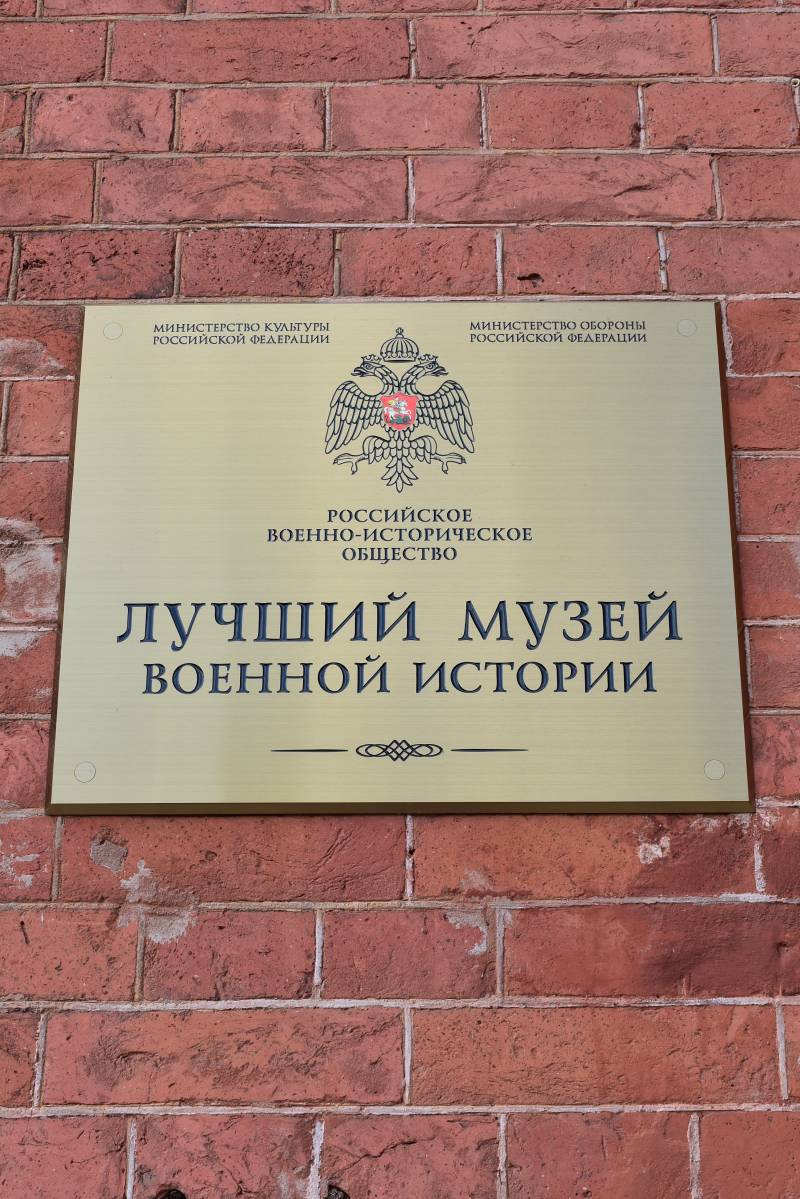 The new fortification was located on an artificial island, which was called the Artillery Island, and was supposed to prevent the attackers from concentrating their forces to strike at the main fortress on Hare Island. The fronts of Kronverka have a bastion style of the French school with small orillons (from the French orillon - “eye”), which allow conducting longitudinal fire from the reinforcement, that is, protecting the walls from flanking attacks. In accordance with all the rules, ravelins, or triangular fortifications separate from the main structure, located in front of the water channel, were placed in front of the fronts. Kronverk's escarp, counter-escarp and Kapuniri were built from earth and wood in those days. 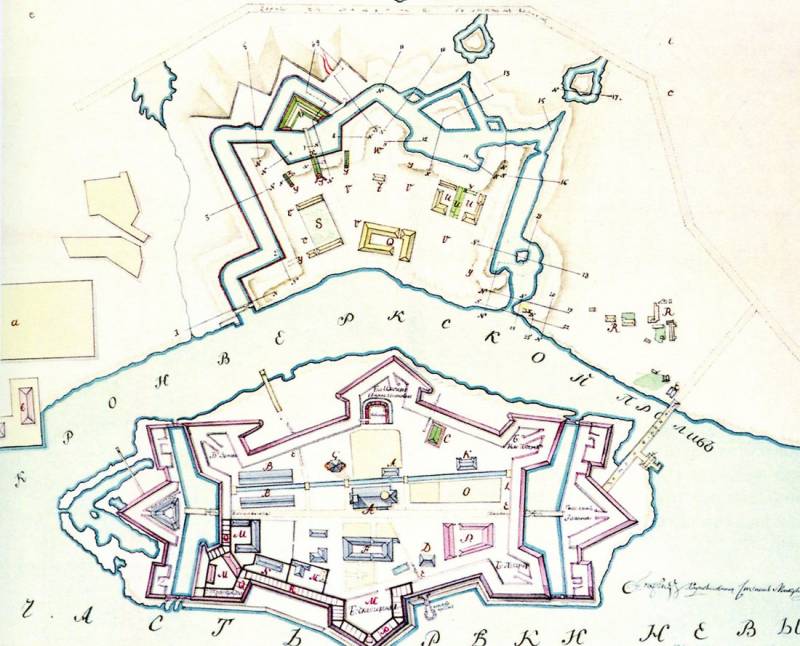 Plan of Kronverk and Peter and Paul Fortress 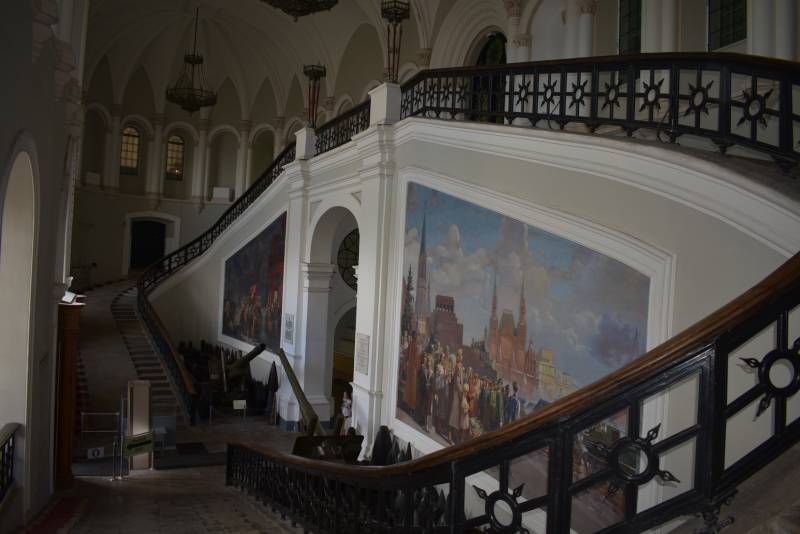 Entrance Hall of the Military History Museum of Artillery, Engineering and Signal Corps 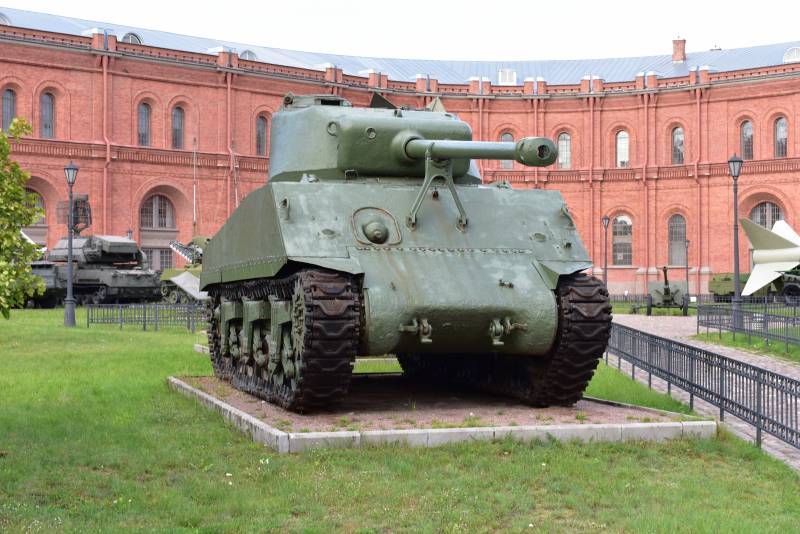 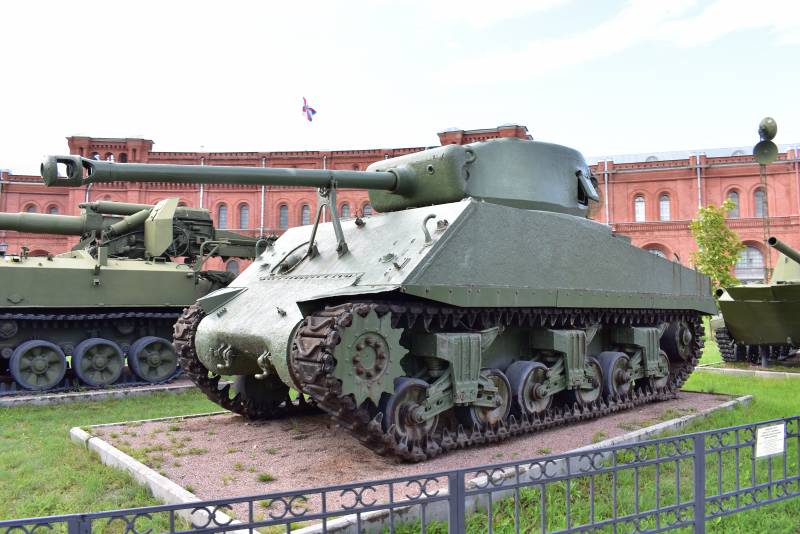 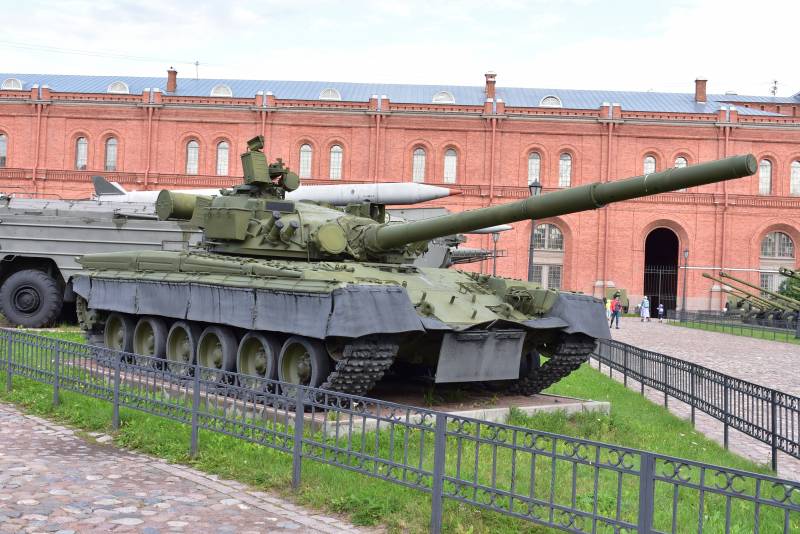 Since 1706 of the year, they began to attract stone for construction - fencing for protection against erosion by water was protected by granite scarp. Housing casemates were also located on Kronverka from the inside, and under each flank (fortification located perpendicular to the front of the fortress) there were two-tier defensive casemates. Throughout the 17th century, the northern defender of the Peter and Paul Fortress was modernized and rebuilt at the initiative of both Peter I and his associates. One way or another, Count and General Burchard Christoph von Munnich, Prince Ludwig of Hesse-Gomburgsky, Count Peter Ivanovich Shuvalov, as well as military engineer and general-general Abram Petrovich Hannibal, great-grandfather of Alexander Pushkin invested in the development of Kronverk. Decades after the erection, both the St. Petersburg Fortress and its northern defender became outdated and became part of the magnificent St. Petersburg panorama. However, the main fortress overshadowed Kronverk both in terms of historical value and literally - in order to see the fortification from the city center, it is necessary to bypass the Peter and Paul walls.

If we compare the age of Kronverk, which now houses the artillery museum, with the age of the cannon assembly, it turns out that the first artillery pieces began to be collected back in the 1703 year. That is, two years before the laying of the first timber-earth Kronverka. And much earlier than the famous Kunstkamera, which Peter I laid down in the 1714 year, and which many mistakenly consider the oldest museum in Russia. Where were the first exhibits of the future artillery assembly located? In the Peter and Paul Fortress in a wooden shophouse by order of Peter I. And the first head and custodian of the exhibition was Sergey Leontyevich Bukhvostov, whom the Russian tsar in his youth called the "first Russian soldier." In the amusing troops of the young Peter the Great, Bukhvostov once occupied the post of "amusing gunman." 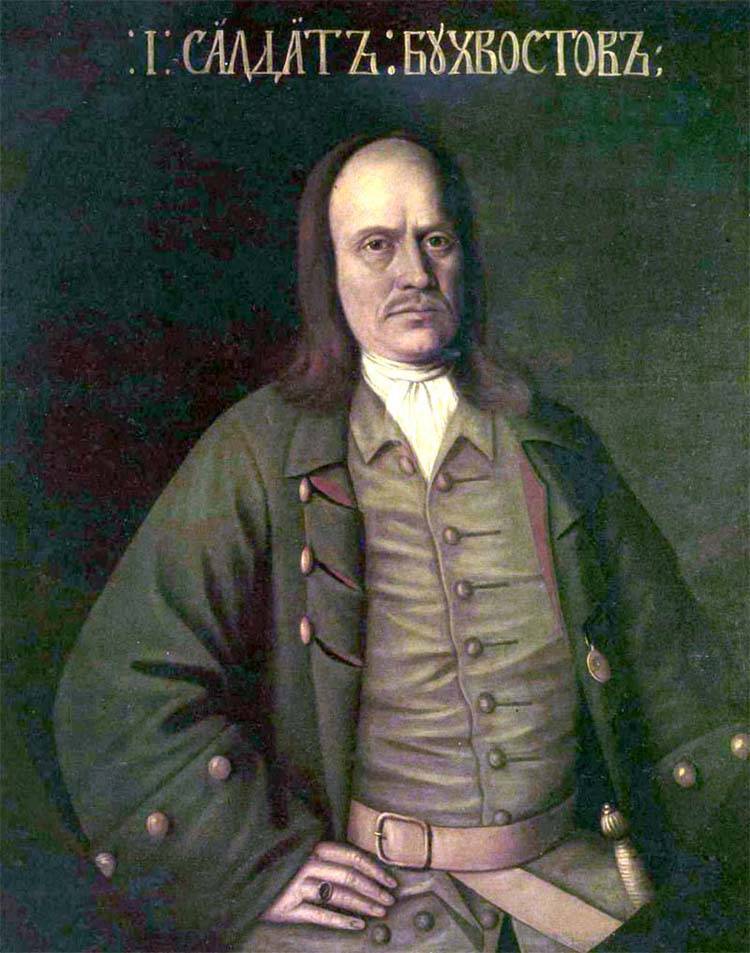 To fill the exposition required a lot of effort, since in the days of that time, all their spent and obsolete weapons were melted down to create new cannons or bells. Still, copper, iron and bronze were not the most readily available materials. In the decrees of Peter I, one can see in this regard the requirements for the military leaders of all cities of Russia about the need for strict accounting, inventory and storage of all guns and maszhers (mortars). The most outstanding weapons were ordered to be sent to the exposition of the nascent museum in the Peter and Paul Tseykhgauz. So, in the first years, 30 guns with 7 mortars arrived from Smolensk at once. Often the tsar himself examined the weapons prepared for disposal, of which the most interesting were sent to the museum. And even at a turning point after the Battle of Narva, when the army was in dire need of armory metals, accumulated in the zeichhaus, the guns did not go to total melting. The severity of the situation is evidenced by the numerous facts of the melting of bells seized from existing temples and churches. The state took this step only after the approval of the church.

Over time, to replenish the collection with “inverter, curious and memorable” exhibits, they began to attract merchants who bought weapons abroad. A noteworthy story in this connection is the example of the Swedish merchant Johann Prim, who acquired the old Russian cannon Inrog for the collection in 1723 in Stockholm and brought this colossus to his homeland. The artillery administration then wrote:
"This gun is not required in artillery and henceforth cannot be valid, but it was bought only for a curiosity and seeing that it is old Russian." 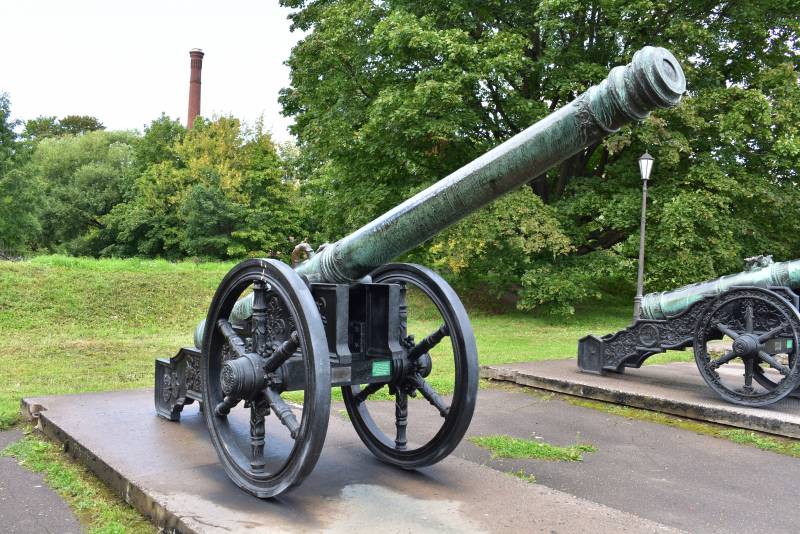 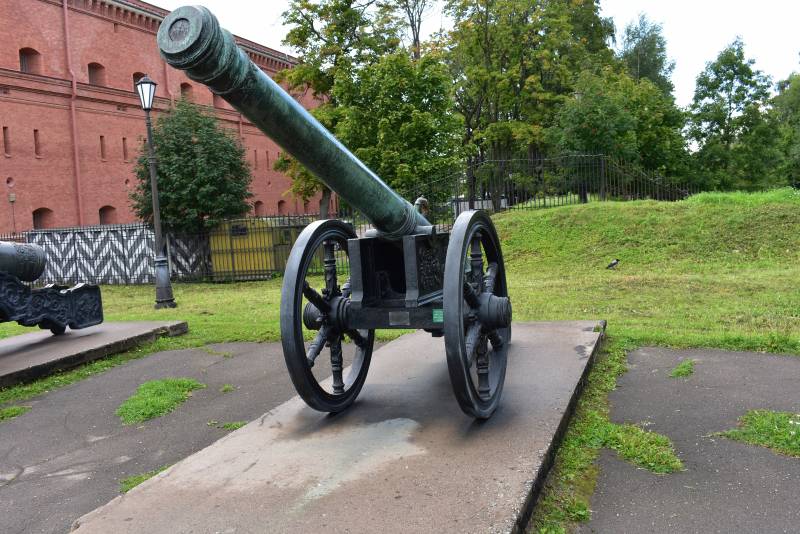 In 1776 in St. Petersburg on Liteiny Prospect a three-story artillery arsenal of Count Orlov appeared, in which the second floor was completely transferred to the needs of the museum from the Peter and Paul Museum. By the end of the 18th century, the oldest museum in Russia also became the largest military historical museum in the world. True, it is closed for free access by visitors until 1808, when, together with the first visitors, a new life begins in the collection of military values. Catalogs, guidebooks are compiled, and the painstaking work of classifying and restoring exhibits begins. The memorable hall in the artillery arsenal of St. Petersburg for the first time coped with the influx of visitors, until the wars of the early to mid-19th century filled the collection with captured weapons. A unique collection of values ​​required new areas, but then suddenly the building of the Oryol arsenal was transferred to the Ministry of Justice for the placement of the court. This happened in the 1864 year and the entire collection of weapons was kept in basements and inappropriate warehouses for four years. It was at this moment that Russia could lose valuable exhibits of the artillery collection of Peter. But very timely, the emperor Alexander II himself intervened in the matter, who in 1868 ordered to transfer the assembly of many thousands to the stone, by that time, Kronverk Peter and Paul Fortress. Since that time, the official name of the Peter the Great Museum has become “The Hall of Memorable Objects of the Main Artillery Directorate”. 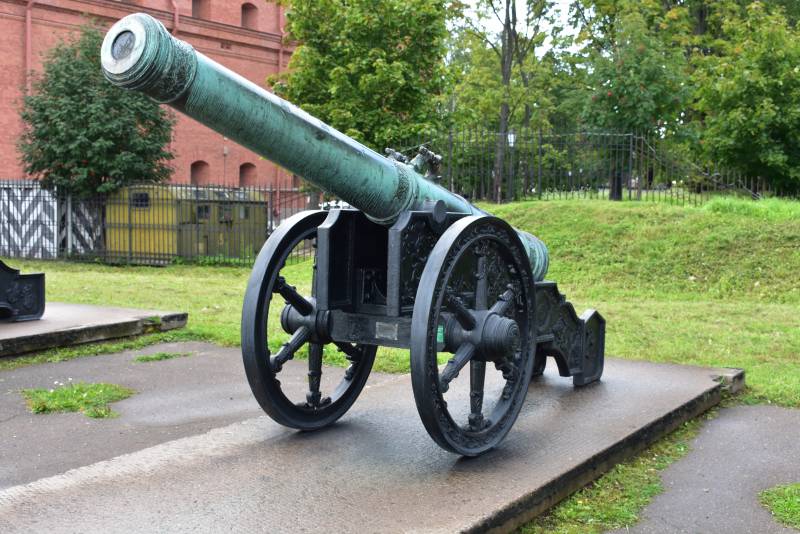 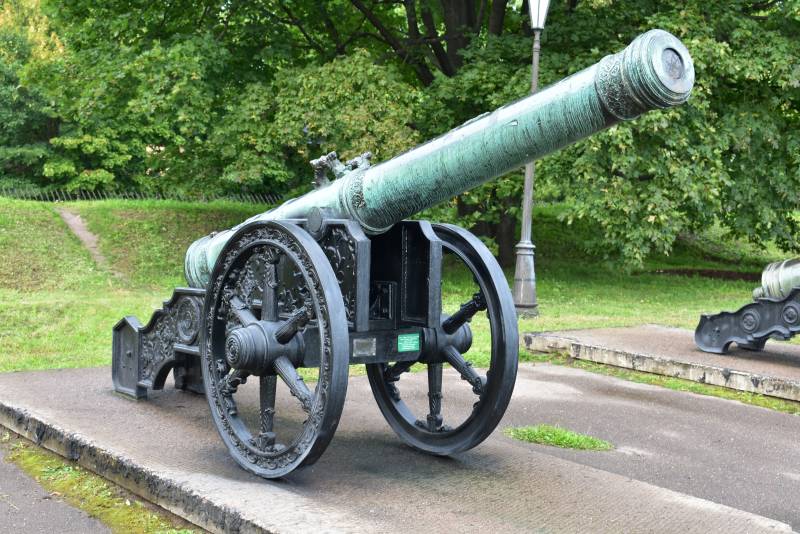 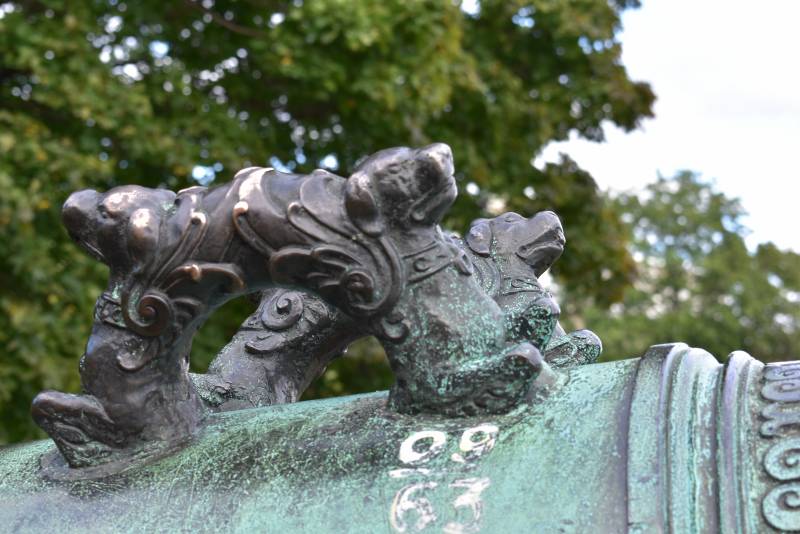 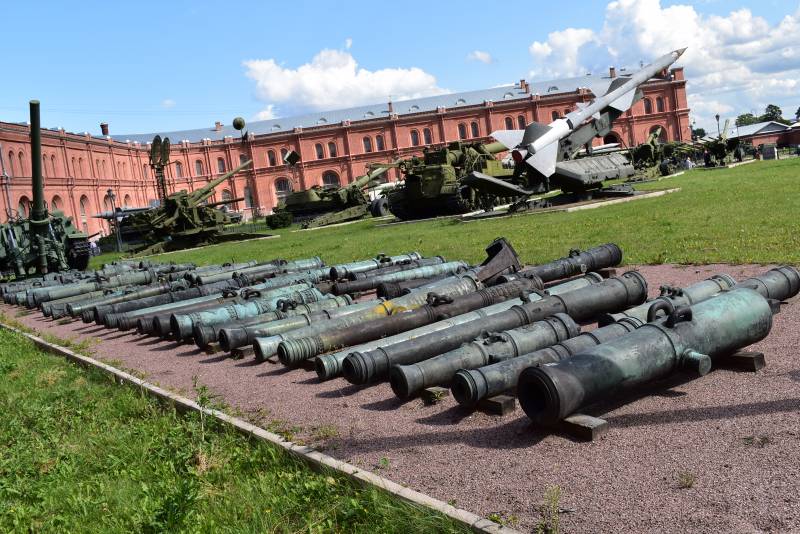 Here in this state is part of the exposure. There is not even a description of the guns

Clover became stony for a rather paradoxical reason - revolutions began in Europe, leading to the overthrow of the royal dynasties. In this regard, Nicholas I decided to protect himself and the state from the "revolutionary infection" by building a mass of fortresses throughout Russia. In 1848, the construction of a two-story arsenal building on the site of the wooden-earth Kronverka was begun. In 1860, all work was completed and the powerful red stone fortification was officially named the “New Arsenal in Kronverka”. After 8 years in the walls of the fortress they found a place for exhibits of the Peter the Great’s meeting, which by that time had more than 150 years old.

At the beginning of the 20th century, a lot of tests fell on the lot of the artillery museum. At first they wanted to transfer him to the Peter and Paul Fortress, and at the meeting place they planned to place the Mint. In 1917, when the Germans were eager for the capital, the exhibits of the museum had to be evacuated to Yaroslavl. This was largely due to the huge amount of gun bronze for which the Germans had special plans - for them it was a strategically important resource. The revolution also did not spare the exhibits. Both in Yaroslavl and in Petrograd a lot of archival data burned, a collection of banners, a collection of trophies and documents. 1924 year brought another disaster - a devastating flood, which flooded a considerable part of the exposure.

The latest history of the museum

After the Great Patriotic War and the period of the most difficult restoration of the museum, collections were continuously replenished with new exhibits. These were both captured models and the latest developments of the Soviet military industry, many of which bore the status of prototypes. It was in the postwar period that the museum finally focused on the artillery profile and exhibits from the Quartermaster’s collection and many historical military-medical equipment were removed from the collection. Also in small museums are sprayed collections of hats, military uniforms, the Suvorov collection and religious objects. In 1963, the Central Historical Military Engineering Museum joined the exposition in Kronverka, and two years later the Military Communications Museum.
Now in the exposition of the Artillery Museum there are more than 630 thousand exhibits of which 447 are located on an external platform in the open air. The meeting itself, which I managed to meet in mid-August, leaves a rather controversial impression. On the one hand, the museum is filled with unique equipment and weapons, many of which date back to the 16th-17th centuries. In total there are 13 halls on a total area of ​​about 17 thousand square meters. The Kronverk building itself is of considerable historical value, and even its content is even more so. The museum is accessible - it is easy to find in St. Petersburg and it is open five days a week, and you can get to the open exhibition absolutely free. 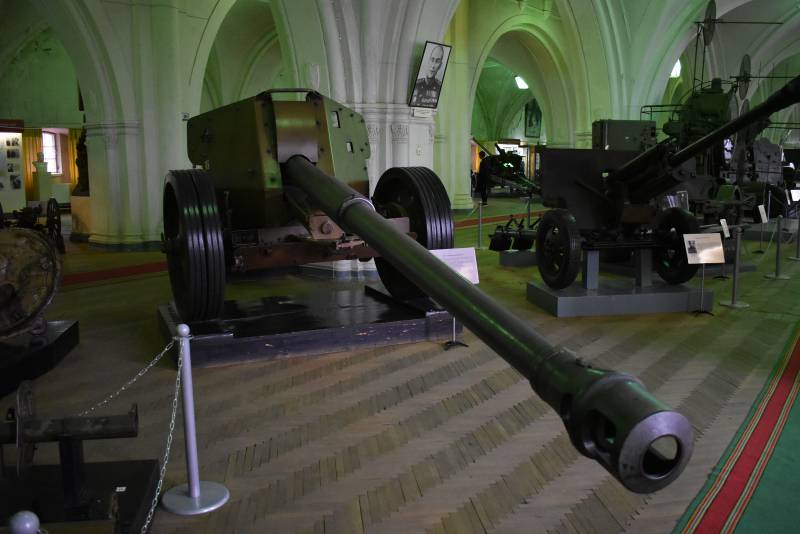 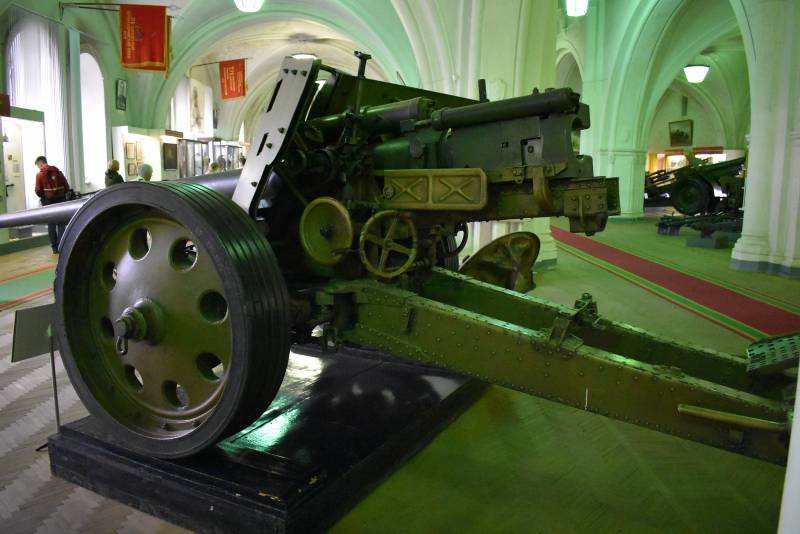 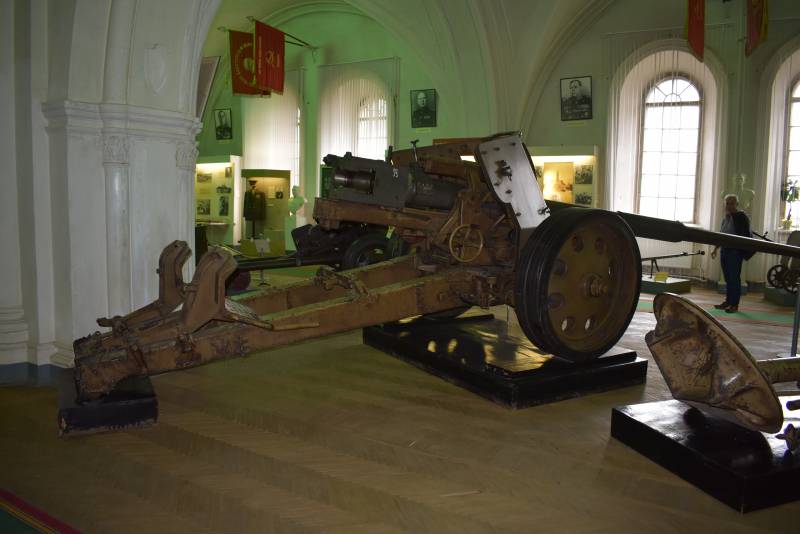 Huge German anti-tank 8,8-cm gun PAK 43 / 41. Gun mass more than 4 tons. It is noteworthy that all the Nazi guns in the museum are standing with their trunks down

On the other hand, for a modern museum, the design is very modest. Especially when compared with the modern hangars of the museum complex in Patriot Park near Moscow. Many halls lack elementary lighting of exhibits, and the most valuable trunks of medieval cannons are piled like logs in the museum. In addition, the halls of the artillery assembly are in a permanent state of repair and you are unlikely to be able to visit them all at once. Firstly, the part will be closed for repairs, and secondly, there will not be enough time for a thorough inspection - the museum works from 11.00 to 17.00. Despite this, the museum’s collections and the atmosphere inside it are unique. Nowhere in Russia will you find such a large gathering of witnesses to the world of cannon and military engineering history. Each hall of the museum requires separate attention and a separate story.