Mobile forces of Russia and Germany in the Baltic. 1915 summer of the year

August 30 2019
11
In the spring and summer of 1915, the Baltic states became an arena for the actions of the mobile forces of the Russian and German armies. Both cavalrymen and scooters of opponents actively acted - and often they entered into a confrontation with each other. About interesting and revealing episodes that happened in June - this article. 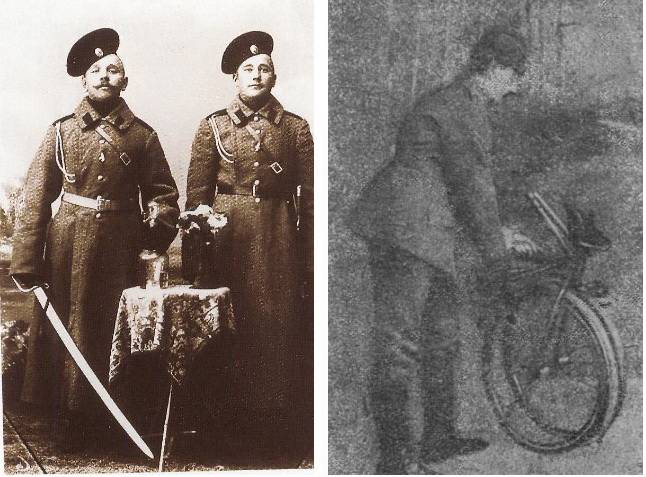 By June 1915, German troops, advancing in Courland, captured Libau, advancing to the Sankenhausen line (north of Libava) - Gosenpot - st. Muravyovo, on which they are fixed.

On the right flank of the Russian Baltic front, the 4 separate cavalry brigade and 2 militia squads located in the cordon operated on - they covered directions to Vindava, Tukkum and Riga. The most important operational area was Gazenpot - Goldingen - Tukkum - Riga. The headquarters of the detachment and the general reserve were located in the village of Kurs-König - in 15 km northeast of the city of Gazenpot, on the Riga road.

To conduct combat reconnaissance, the head of the detachment sometimes advanced small horse detachments with a force of up to 2 squadrons with the support of an artillery platoon, and, in addition, officer patrols were periodically sent to some directions.

The patrolmen of one of such patrols, under the command of Lieutenant 20 of the Finland Dragoon Regiment Minakov, who was operating in the direction of Boehn Cape - Kandangen Creek - Vanegen Creek - Kursch-Koenig, discovered a group of German scooters (cyclists) of up to 30 people. 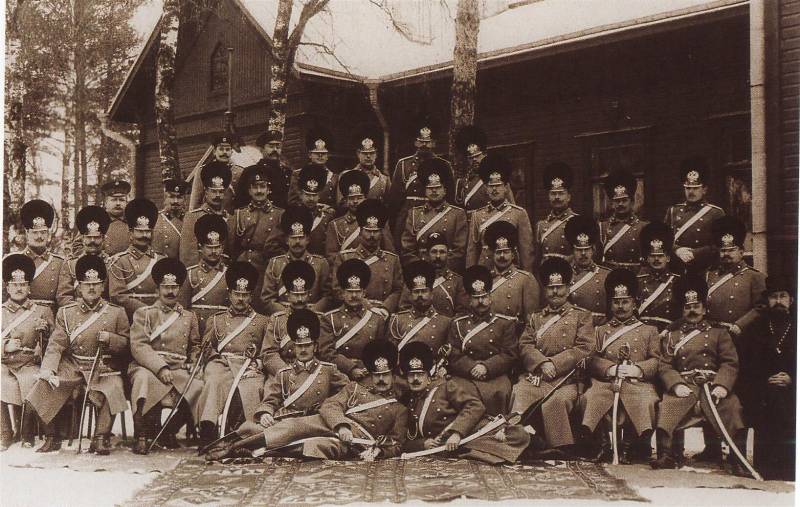 Officers of the 20 Dragoon Regiment in winter uniform

The group moved along the gazenpot road to Kandangen Manor. The head of the crossroads, assessing the favorable conditions of the tactical situation (neither sentinels, nor crossings were discovered by the enemy, the presence of folds of rough terrain, the carelessness of scooters who were guarded only at the forefront and at a short distance from the core of the group), decided to attack the enemy through the eastern exit of the manor.

Dragoons flew completely unexpectedly for the Germans - just at that moment when the scooters were pulled into the courtyard of the master’s court. Being taken by surprise, they did not have the opportunity to promptly jump off scooters and take up rifles, and therefore, having lost several people wounded and killed, they quickly surrendered. About twenty Germans were captured. Russian dragoons had no losses. 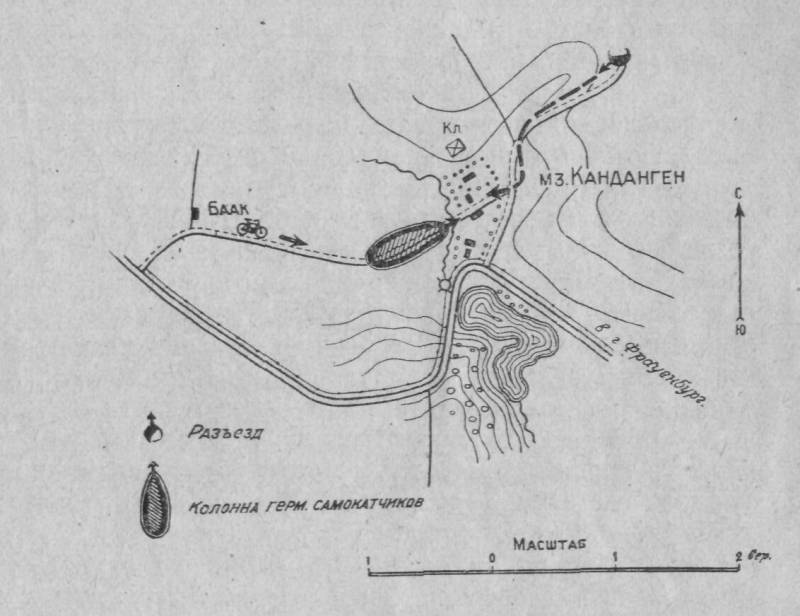 But at that moment, when the lieutenant was about to send prisoners and scooters to the rear, he received a message from the sentinels: another convoy of scooters was quickly approaching the estate - this time with about 100 people. Lieutenant Minakov, inspired by success, immediately decides to attack this column, despite the overwhelming numerical superiority of the enemy.

After waiting for the moment when the enemy was drawn into the alley leading to the estate, he throws himself with the dragoons into the attack. The head two or three dozen scooters were quickly shot down by the Russians, but the rest, moving at a distance in an extended column, managed to get off their scooters, take cover behind trees and in roadside ditches and open fire on the attackers. One of the very first shots was seriously injured by a bullet piercing Lieutenant Minakov, who was riding ahead of the dragoons; a horse not controlled by a wounded rider was stopped by the Germans, and the officer was captured. And his departure, having lost several people wounded, as well as his boss, all the Germans captured and taken scooters, was forced to retreat. 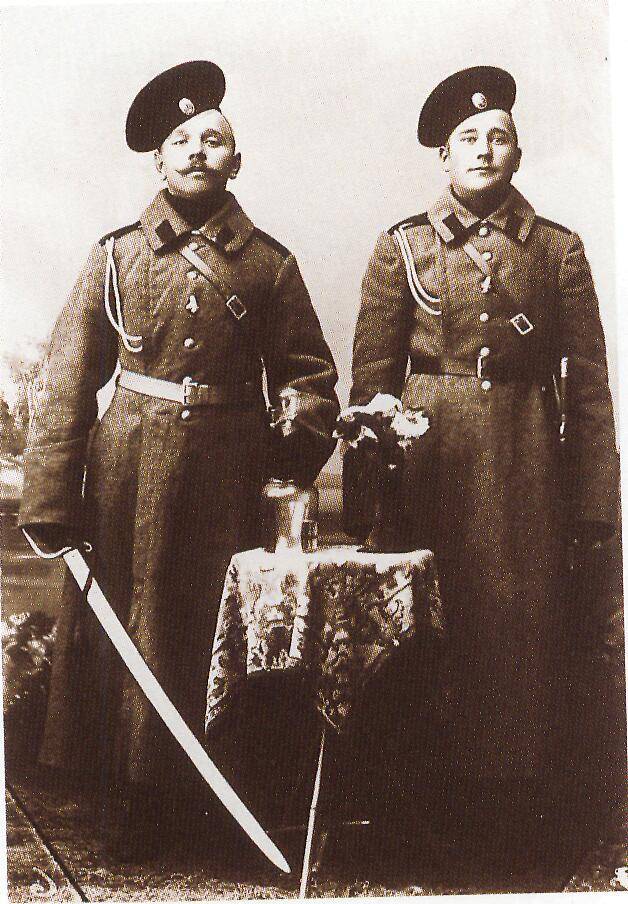 Dragoons of the 20 Finland Regiment. The soldiers are dressed in traditionally long cavalry overcoats (it was believed that such an overcoat protects not only the rider, but also the horse)

The capture of the head of the race by the Germans had the following consequences: Lieutenant Minakov wrote down passes and reviews for the whole week ahead in his field book. This was immediately used by the Germans. An hour later, after 2, after the events described above, some townsfolk appeared on the Russian outposts, who knew the pass and recall and assured the chiefs of the outposts that they were Russian agents. Thanks to timely reporting to the detachment chief about the capture of Lieutenant Minakov and notification that he had omissions and reviews written in his field book, the latter were changed, and this did not cause any undesirable consequences.

What do we see?

Reckless courage (and having already brought a positive result earlier) often leads to defeat if the current situation is not adequately taken into account - as happened with Lieutenant Minakov. Which could be satisfied with the initial success (all the more so since the task of obtaining his intelligence by the detachment was completed) and retreat, or ambush the enemy. We also see that the fights between cavalrymen and scooters proceeded with varying success, and the strength of the latter was the ability to dismount quickly (in the absence of the need for special care, unlike the cavalrymen, about their transport), entering into firefight. It was preferable for cavalry to attack the scooters not on the forehead, but from the flank - trying to cover the entire column in depth (the flank attack was facilitated by the fact that side guards were not always present on the scooters). In addition, since the scooters were quickly brought into combat condition, all of their part had to be (if possible) attacked with lightning speed.

The moral of this episode is that, speaking for reconnaissance, it is necessary to destroy all documents of value to the enemy, or at least not to take those with you.

The courtyard of the Eglinek

Another significant episode occurred on the Riga Highway, approximately 5 km from the city of Gazenpot. Here, at a separate yard of Eglinek, the main outpost of the 6 squadron of the 20 Finland Dragoons regiment was located. From the hill adjoining the courtyard, the road to the town of Gazenpot was clearly visible. There was a separate field guard in Chiba, and outpost No. 2 at Lansenden Manor. 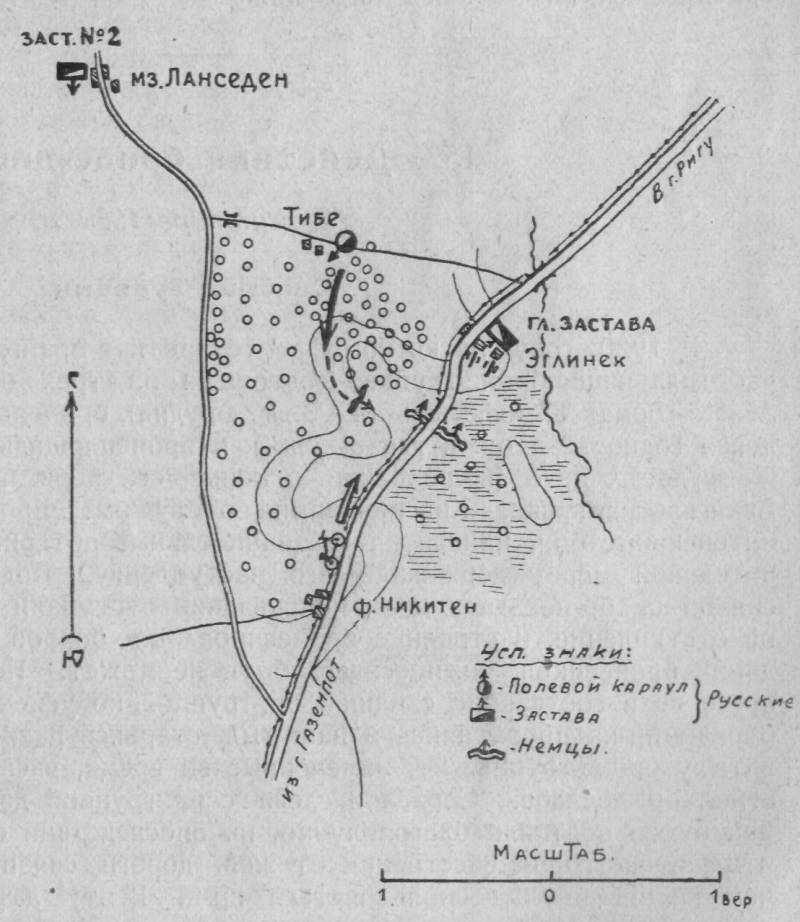 Once an hour watch post set up from an outpost, discovered that from the enemy’s side from f. Nikiten on Eglinek some part moves quickly, gleaming in the sun with metal. The commander of a platoon of easel machine guns, located at the outpost, defined this part as a group of self-riders in the number of 10 - 12 people. Considering these scooters to be the advanced part of a larger detachment, the head of the outpost ordered the dragoons to prepare for battle (in addition to the machine-gun platoon, there were 8 dragoons on the outpost). Scooters, without decreasing the course, quickly approached. From a distance of 500 - 600 steps one of the machine guns fired at them. Two or three Germans, apparently struck by bullets, fell along with the scooters onto the road, while others, quickly jumping off the cars, scattered on both sides of the road and opened fire on the outpost, which entered into a lively shootout with them. 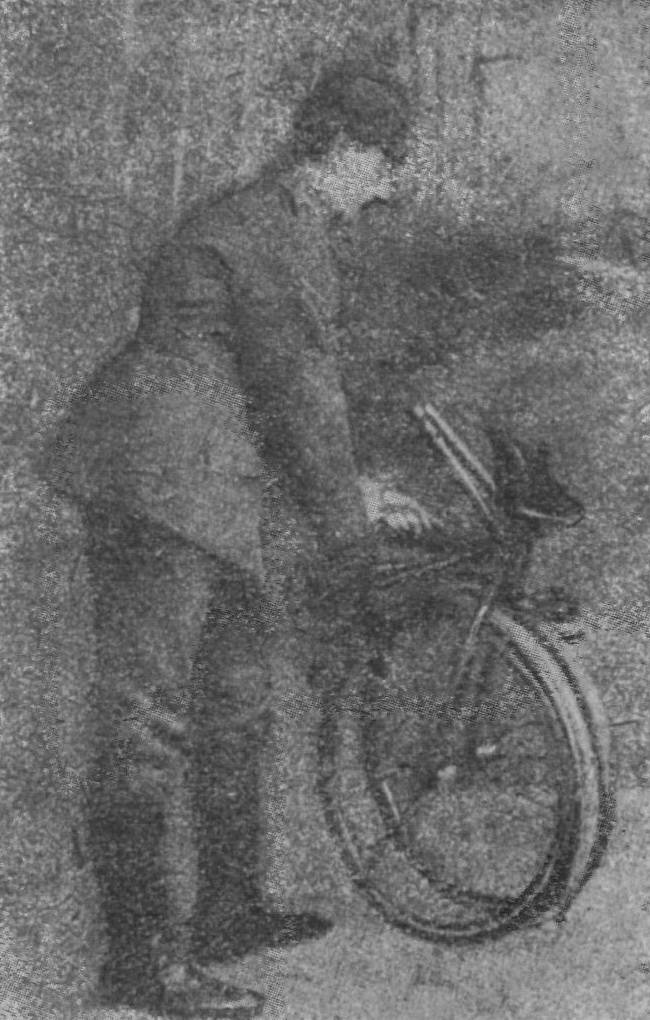 The head of a separate field guard in Chiba, having heard shots, with four walking dragoons, passing a grove between Chiba and Eglinek, went to the flank of the Germans - opening fire on the latter. The Germans fought as long as they were able to hold rifles in their hands. Most of the scooters were killed and the rest injured (some of them had several wounds).

When asked by the squadron commander to one of the relatively slightly wounded Germans, how to explain their actions, the German said that on the eve of their battalion he replaced the battalion, which stood here for about two weeks. The commander of the battalion, which consisted of most of the unshielded reservists, ordered that the company, which entered into the guard, receive more accurate information about the enemy no later than 12 hours. The company commander called volunteers from among those who know how to ride scooters - in order to go into reconnaissance. Those turned out to be 11 people. The lieutenant, who had information from local residents that the Russians were inattentively guarding, decided to capture the outpost on the spot, one of the forester of the landowner Baron Firks volunteered to indicate it. Scooters received a categorical order without information about the enemy not to return. 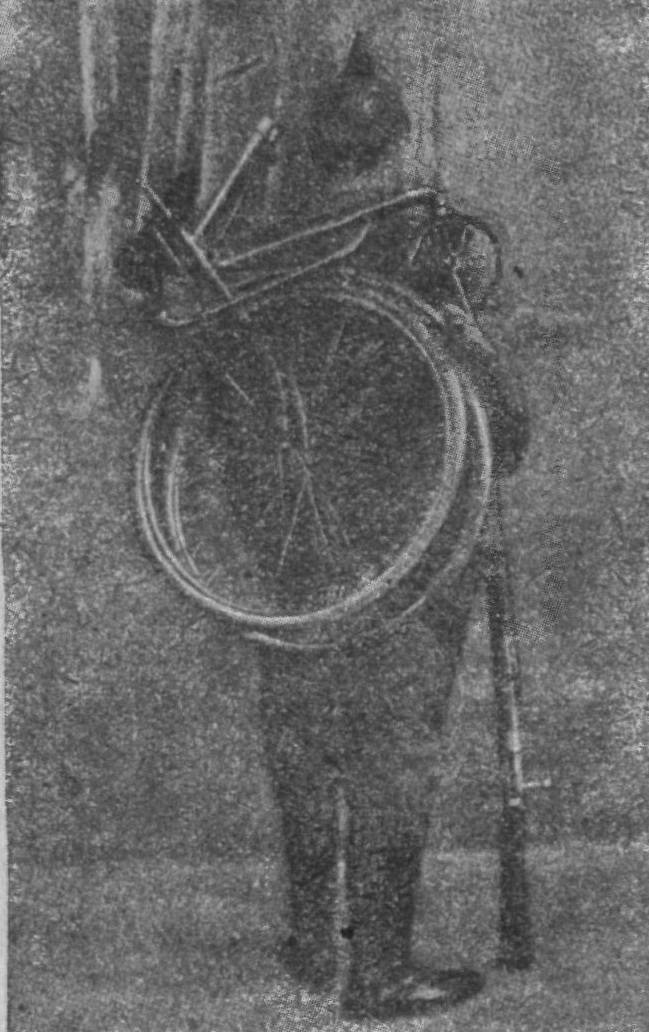 German scooter. The scooter is folded attached to the knapsack and worn on a scooter

In one of the murdered Latvians (residents of the Eglinek courtyard) did recognize the aforementioned forester. Incidentally, the Germans' conductor confidently declared that the Russians had no machine guns at the outpost (the latter were carefully disguised).

We see what miscalculations were made by the scouts (this time by German scooters) - moving without a watch and completely trusting the conductor from the local residents.