In the United States are preparing a new Shuttle. Spaceplane Dream Chaser

August 19 2019
44
Today in the United States, work is underway to create new spacecraft. Several private companies are implementing their own projects in this area at once. On 14 on August 2019 of the year, Sierra Nevada Corporation published an official press release according to which the company’s cargo space shuttle will go into space for the first time in 2021. It is planned to use the Vulcan launch vehicle as a launch vehicle. The main difference between the new Dream Chaser spacecraft from the Shuttle and the Soviet Buran will be folding wings, which will launch the spacecraft inside the head fairing of the launch vehicle. 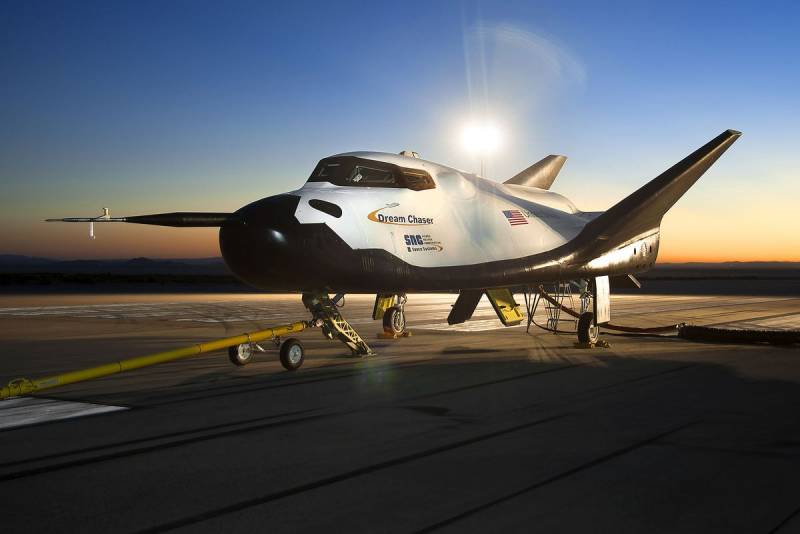 Initially, the new Dream Chaser spacecraft was developed in a manned version. With the help of the shuttle, the Americans expected to deliver their astronauts aboard the ISS. But after the accident in the first flight in 2013 in September of next year, the project did not receive the necessary funding from NASA, falling out of the number of participants in the Commercial Crew Program, contracts for which went to SpaceX and Boeing, which offered their options for manned spacecraft Dragon V2 and CST- 100 Starliner respectively. After that, Sierra Nevada Corporation decided to switch to creating a transport version of the shuttle. It was in this capacity that the company was one of the three winners of the competition for the second phase of the supply of the ISS Commercial Crew Program 2. Within the framework of this program, Dream Chaser space planes will carry out six flights to the International Space Station by 2024.

There is no doubt that Sierra Nevada Corporation (SNC) is implementing its project. Today, SNC, founded back in 1963, is one of the three most innovative US space companies. In addition, SNC is well established in the market of civilian, military and commercial solutions and is a top-level supplier for the US Air Force, as well as one of the fastest growing companies in America.

According to a published press release, representatives of the American company Sierra Nevada Corporation decided on a launch rocket that will be used for the first six launches of the space shuttle Dream Chaser (Eng. “Dream Runner”) aboard the International Space Station. The cargo spacecraft will be launched using the Vulcan rocket, which is being developed by another American company, the United Launch Alliance (ULA). At the same time, SNC emphasizes that a wide range of conventional missiles that are already on the market can be used to launch a transport spacecraft. For example, the Atlas 5 rocket, on which the Russian RD-180 engine is installed, was previously considered a possible carrier. 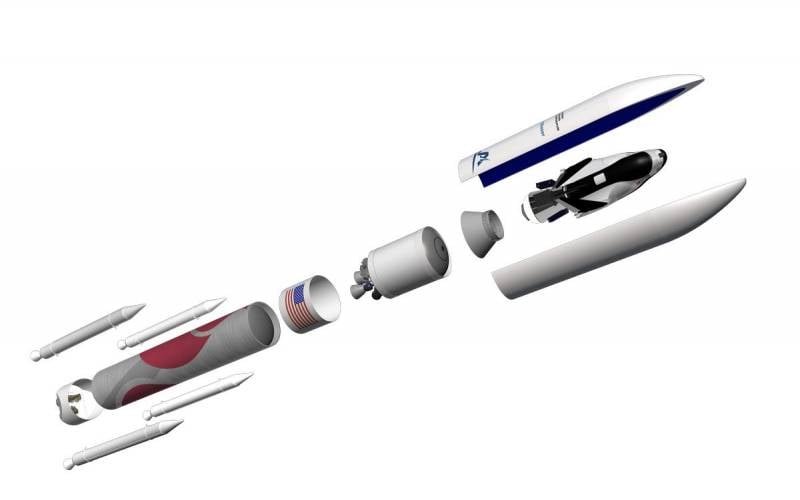 SNC notes that they opted for ULA because of their close cooperation in the implementation of the Dream Chaser space project, and also because of the reputation that the United Launch Alliance has in particular in the field of flight safety and punctuality of launches. ULA is a joint space enterprise owned by two giants of American industry - Boeing and Lockheed Martin. The combined legacy of these corporations in aircraft and space exploration is enormous. ULA, which was established in December 2006, boasts the successful launch of more than 130 satellites, which provide global communications, observation of the Earth’s surface, and solve various scientific problems.

ULA uses three main types of launch vehicles to launch various payloads into space: Atlas-5, Delta-2 and Delta-4. Moreover, both of these families of rockets have been used by Americans for more than half a century. In this regard, the Vulcan heavy-duty carrier rocket will replace the Atlas-5 rocket. Work on the successor of the Atlas rocket, the first stage of which a Russian-made RD-180 engine is installed, has been underway in the United States since 2014. A new missile project is being created as part of public-private partnerships. According to plans, the first flight of the new Vulcan launch vehicle should take place in April 2021 of the year. In the new rocket, fundamentally new American-made engines will be at the first stage, we are talking about BE-4 methane-oxygen engines. It is the use of liquefied natural gas (methane) instead of kerosene as fuel that is an innovative feature of this rocket engine.

It is already known that the new American Vulcan launch vehicle will be two-stage. To launch heavy loads into orbit, the rocket configuration allows the installation of up to 6 solid-state side accelerators. It is expected that the most load-carrying version of the Vulcan rocket will be able to deliver payloads weighing up to 34,9 tons into orbit. At the same time, a version of the launch vehicle with 4 solid-fuel boosters, two engines located in the second stage and a five-meter head fairing will be used to send the Dream Chaser spacecraft into space. 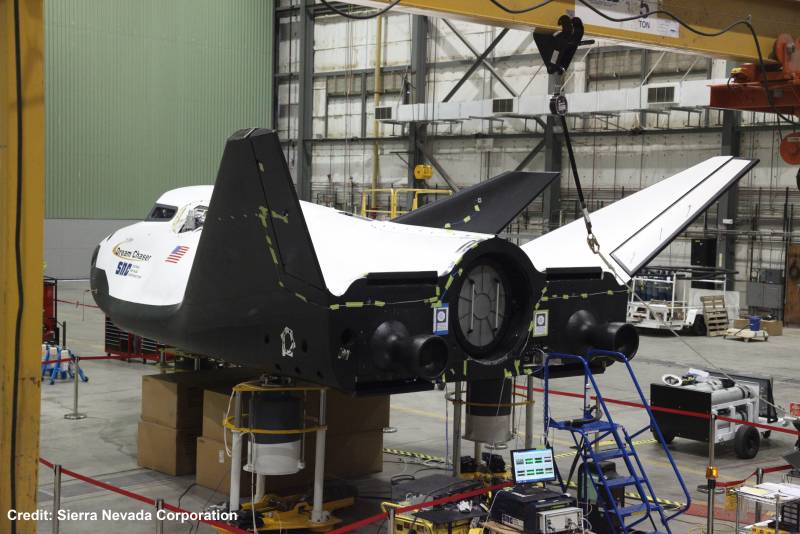 Spacecraft Dream Chaser and its features

If the new American rocket is still at the design and creation stage of the first flight model, which will not be launched earlier than 2021, the work on the Dream Chaser spaceship has advanced much further. A new spacecraft from SNC engineers has long been in the testing phase. The first flight tests of the novelty began in the 2013 year, though the very first flight ended in disrepair for the device. When landing, the nose landing gear did not come out, and the spaceplane was seriously damaged. As a result, the first successful landing of the spacecraft at the airfield took place only at the end of the 2017 year.

According to the project, Dream Chaser is a spacecraft returned to Earth, made according to the space plan. When creating a new multipurpose space transport vehicle, the developers used design solutions that were previously implemented in the design of the American spacecraft HL-20 and a large series of its predecessors, including X-20 Dyna-Сор, Northrop M2-F2, Northrop M2-F3, Northrop HL-10, Martin X-24A and X-24B, the first of which began to be tested back in the 60 years of the last century. Initially, it was planned to create a manned version of the ship, designed to deliver 2-7 astronauts and cargo into orbit, but at the moment, work is underway on an unmanned version of the shuttle in the cargo version.

The new ship will provide the ability to deliver goods to low Earth orbit and the subsequent return home. Unlike other spaceships that land in a parachute fashion, the new spacecraft will land in an airplane on the runway. It is planned that all six shuttles launched under the CRS-2 program will land at the Kennedy Space Center on the strip that was built to land the previous Space Shuttle. 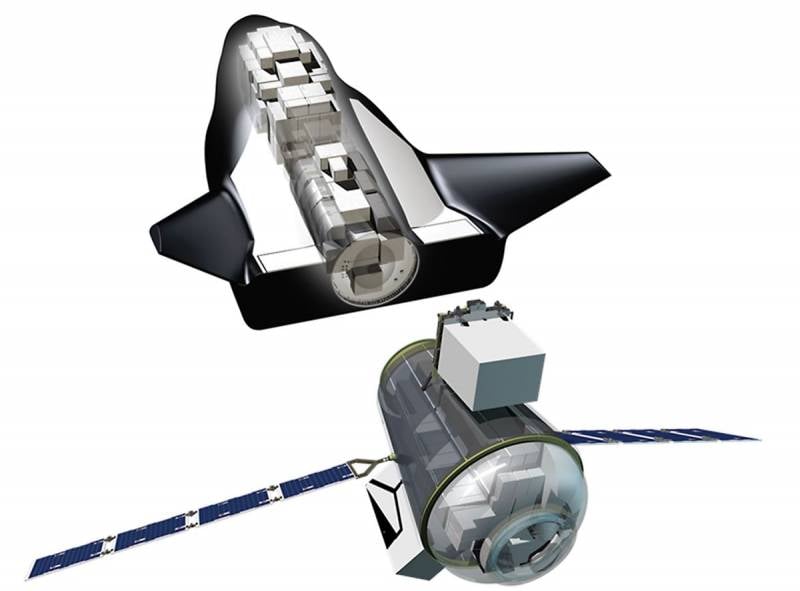 The new American space shuttle Dream Chaser will be able to deliver up to 5500 kg of various cargoes onboard the ISS, as well as return approximately 1750 kg of payload back to Earth. Due to the ability to land on the runway, and not at sea, the goods delivered to Earth from the spacecraft can be unloaded very quickly. This is especially important for various scientific programs and is especially useful when conducting biological experiments. Structurally, the shuttle will consist of two parts: the spacecraft itself and the additional auxiliary cargo module docked with it, which will be located in the aft part of the device. A distinctive feature of the Dream Chaser will be folding wings. Such a technical solution is necessary in order to place the ship inside the head fairing of the rocket, whose diameter does not exceed 5 meters. This method of launching the ship into orbit distinguishes the new spaceplane from its American predecessor, the Space Shuttle and the Soviet Buran.

It is worth noting that in the Soviet Union a spacecraft similar in design and launch method was developed, known as the BOR-4 (unmanned orbital rocket plane) or Cosmos-1374. It was an experimental unmanned spacecraft, which was a scaled-down (approximately 1: 2) copy of the Spiral orbital aircraft. In the USSR, from 1982 to 1984, 6 successful launches of this spacecraft were carried out, in which the ship was launched into various orbits up to 225 km high. The device, which is modest in size, like the modern American Dream Chaser spacecraft, was launched into orbit inside the head fairing of the launch vehicle. Tests and experiments carried out in the USSR as part of the BOR-4 program made it possible to finally solve all the existing problems of thermal protection of the "main star" of the Soviet space program - the Buran orbital rocket-launching ship.