Russia dictates the terms of the European Union (Niezalezna.pl, Poland) 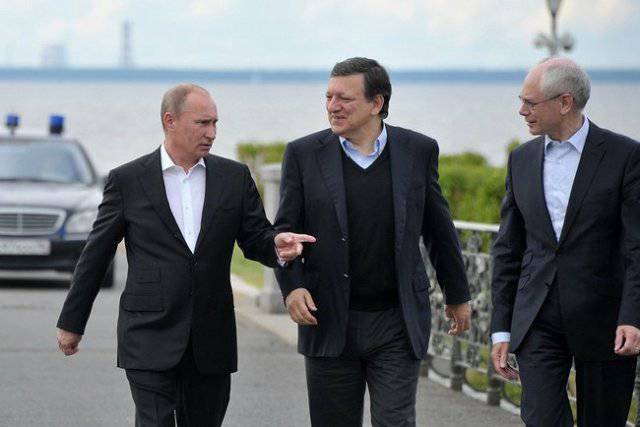 Moscow has been delaying ratification of its treaty with the World Trade Organization (WTO) with the help of various legal tricks all the time. At the same time, she is preparing to transfer the costs of her choice to other countries. Including the European Union.

Before 4 in July, Russia had to ratify the treaty with the WTO and become - at least theoretically, a normal partner in the global market.

However, after 18 years of negotiations, ratification was postponed for two weeks. Despite the fact that Russia joins the organization on very favorable terms (according to some Russian experts), it works all the time to ensure that someone else pays for its entry costs. Recently, the European Union decided that he would have to pay it. The main condition for entry into the WTO is the reduction of customs barriers. As it was previously established, in the first two years after accession to the WTO, Russian customs rates will remain almost unchanged. Only later will be reduced duties on industrial goods (from 11% to 8,2%), as well as on some consumer goods.

The contract with the WTO is including long lists with the names of several thousand products and the precise definition of customs rates, as well as their changes. In Brussels, they realized that Russia perceives its duties rather narrowly. The WTO principle of the abolition of customs barriers and the development of world trade concerns, in its opinion, only the listed goods, Russia wants to impose duties and payments on several tens of thousands of others.

The agreement with the WTO is accompanied by agreements with the EU, called transitional (until the time of the signing of a “correspondingly serious treatise”). The Commission itself noticed what was seen earlier - how Moscow treats foreign partners on the occasion of a number of bans on the import of various types of agricultural products, which is absolutely contrary to the principles of the WTO.
“True, the European Commission demanded that Russia immediately lift all restrictions, but its possibilities of ensuring the protection of the interests of consumers and producers in the EU (...) are rather limited,” writes the trade commission. Consequently, Russia will be admitted to the EU market (which has collective membership in the WTO) on the principles of organization, in return, without taking on any obligations.

Moscow is particularly important expansion in the telecommunications and financial markets of the European Union. In exchange, she proposes to let investors in after nine years, and under certain conditions (in particular, foreign capital can not be more than 50% of total banking capital).

One can only express admiration for the perseverance and consistency with which Russia protects its market, but for us this means the real danger of the uncontrolled expansion of Russian banks and firms in our country.

True, the WTO has mechanisms for resolving disputes, but this would mean precisely a dispute with Russia and putting pressure on it to adhere to the principles. 15 years ago, the famous Russian human rights defender Sergey Kovalev on the occasion of Russia's accession to the Council of Europe called for such actions from Europe. Since then, Russia has fought two Chechen wars, one with Georgia, adopted anti-terrorism legislation significantly restricting civil liberties, and falsified parliamentary and presidential elections. No one in Europe dared to put pressure on her.

According to the former Deputy Foreign Minister, MP from PiS, Krzysztof Schersky, the negotiations on the terms of the trade agreement between the EU and Russia indicate that the European Union already provides it with special conditions.
- In Europe there is a mythic conviction about the enormous significance of the Russian market and Russian politics. This leads to the fact that the EU does not require from Russia what was required of other states, but simply gives it a privileged position, says Krzysztof Schersky.
The MP from PiS emphasizes that the contracts concluded between the EU and Russia are not symmetrical, and the principle of the preferred partner dominates the negotiations.
- In addition, from the point of view of the EU member states that have business in Russia, this form of contracts that go beyond the accepted principles seems to be beneficial. This is a blow to all political norms, ”Krzysztof Schersky sums up.