Russia and Venezuela signed an agreement on visits of warships

August 15 2019
74
Russia and Venezuela have concluded an agreement on mutual visits of warships to the ports of both countries. The document was signed by Russian and Venezuelan defense ministers Sergei Shoigu and Vladimir Padrino Lopez during a meeting in Moscow. 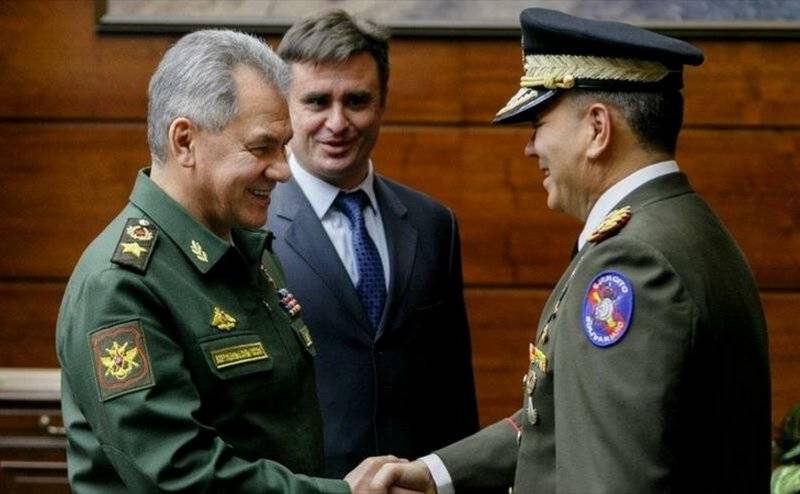 Russian and Venezuelan warships will be able to visit the ports of both countries. The corresponding agreement was signed during an official visit to Moscow by a delegation of the Venezuelan Ministry of Defense led by the Minister of Defense of the Bolivarian Republic of Venezuela, General-General Chef Vladimir Padrino Lopez. The parties also discussed other issues of bilateral military and military-technical cooperation, the details of which are not given.

As Russian Defense Minister Sergei Shoigu stated at the meeting, Russia supports the independent foreign policy of Venezuela and its opposition to US attempts to change the legally elected government.

In addition, the parties discussed the participation of the Venezuelan military in the international army games "Army", to which they are coming for the fifth time. According to the head of the Russian military, this year Venezuela brought the largest team for all time participating in the games - 221 people. who participated in 9 game contests.

In turn, the Venezuelan Minister of Defense thanked Russia for organizing such games and stated that the Venezuelan army personnel are gaining enormous experience by participating in these competitions.

Russian weapons show themselves excellently during the competition. Army international games position Russia as a leading developer and leader in the production of the latest modern weapon systems
- emphasized Vladimir Padrino Lopez.