August 16 2019
66
The basis of the sea aviation naval fleet Russia consists of manned aircraft and helicopters of various types. A few years ago, the first units equipped with unmanned aerial vehicles appeared in naval aviation. To date, a similar technique is available to all fleets and is used both on shore and on ships. At the same time, the development process of the unmanned part of the naval aviation continues and in the future should lead to new results. 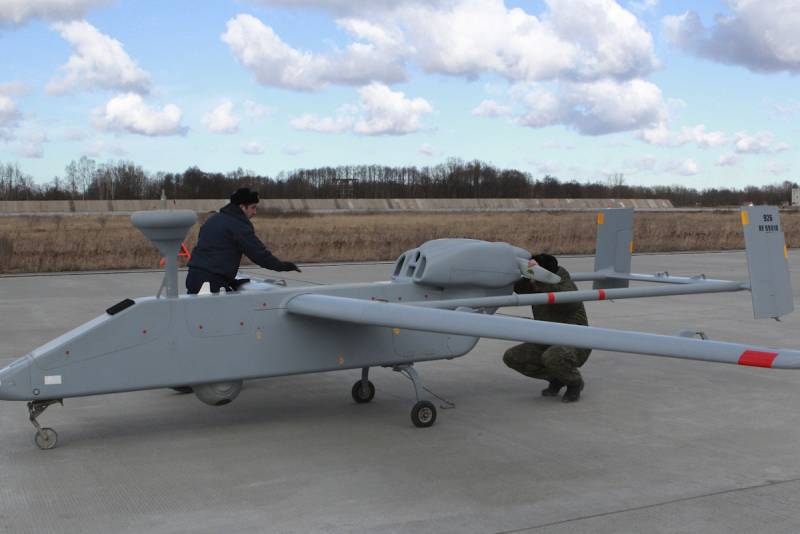 Preparing for the departure of the UAV "Outpost" from the MA of the Baltic Fleet. Photo by the Ministry of Defense of the Russian Federation / mil.ru

From the point of view of forming units with UAVs, the Russian fleet to some extent lagged behind the ground forces. The formation of the first detachments and squadrons with new equipment started only a few years ago. Nevertheless, over the past time, it was possible to solve a number of tasks and create a significant reserve for the further development of the unmanned part of the Navy's MA.

The first detachment of unmanned aerial vehicles was formed in 2013 in the Northern Fleet based in Severomorsk. It consisted of only two dozen military personnel who were to operate several sets of UAVs. In 2014, a detachment of drones appeared in the Pacific Fleet. In the same year, similar units were formed as part of the Baltic and Black Sea fleets.

Almost simultaneously with the formation of the last units, their restructuring began. By 2015, UAV units were transformed into squadrons subordinate to the MA airbases. The great importance of these units soon led to new transformations. Since 2016, squadrons are expanding, and they are also supplemented by new units.

More recently, fleet drones have ceased to be exclusively land-based equipment and replenished carrier-based aircraft. Last year, UAVs began to operate on ships of one of the latest projects. It is expected that in the near future other ships will become carriers of such equipment.

According to open sources, to date, unmanned aerial vehicles of only two types have entered operation in the Navy MA. Previously, the equipment of the same models entered service with the aerospace forces and ground forces and has established itself well. 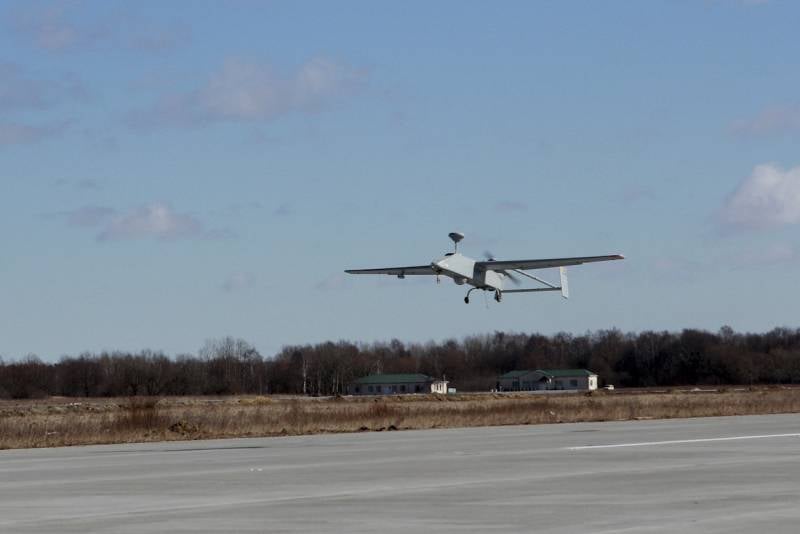 Outpost in the air. Photo by the Ministry of Defense of the Russian Federation / mil.ru

Forpost UAVs, which are the Russian version of the Israeli IAI Searcher II, were the first to enter the fleet. An aircraft weighing up to 500 kg is capable of carrying 120 kg of payload in the form of various surveillance or reconnaissance equipment. Maximum speed reaches 200 km / h, flight duration - 15-18 h. Work is provided at a distance of up to 250 km from the operator.

“Outposts” are operated only at land aerodromes. This technique is intended for reconnaissance, search for targets and the issuance of target designation. Also, the device is used to monitor the results of the shooting. Using similar UAVs, the fleet can search for surface and coastal targets, and then strike at them using any available weapons.

Almost from the moment the Navy “Outposts” entered service, they provided effective artillery fire. Last year, the successful joint use of such UAVs and the Caliber and Onyx naval missile systems was reported. Using a barrage aircraft in real time, tracking of the found target was carried out with the simultaneous issuance of target designation.

The number of Outposts in maritime aviation is unknown. To date, about 50 unmanned systems have been built for the Russian army, each of which includes three UAVs and related equipment. The supply of serial samples to the Navy continues. So, recently it became known that a separate squadron equipped with Forpost complexes appeared in the 318 mixed air regiment of the MA of the Black Sea Fleet.

The second UAV model in the naval aviation units is Orlan-10. Previously, such equipment was supplied to other branches of the army, but in recent years the fleet also began to master it. A number of characteristic features and advantages helps to expand the range of tasks. First of all, all this allows the Eagles-10 to operate both on land and on ships.

The Orlan-10 product is an UAV weighing no more than 14 kg, capable of carrying 5 kg of payload. The maximum flight speed reaches 150 km / h. Duration - up to 15 hours. The device is capable of moving 120 km from the control complex. There is also an offline mode that provides a range of up to 600 km. The drone is capable of carrying optoelectronic, radio engineering or other equipment for reconnaissance, signal relay or electronic warfare. 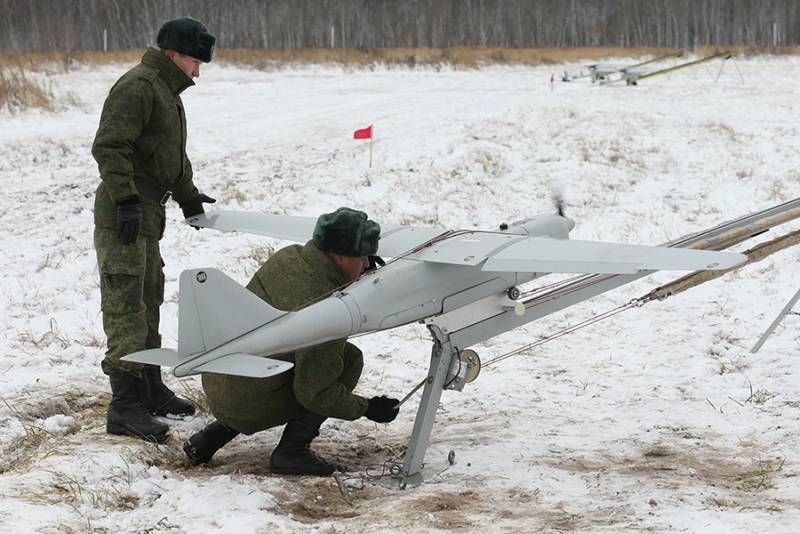 Preparation of the Orlan-10 UAV at the landfill. Photo by the Ministry of Defense of the Russian Federation / mil.ru

When operating by land units, Orlan-10 is launched from a catapult and lands with a parachute. Not so long ago, the use of such UAVs on ships of the Navy began. The carrier ship receives a full-time catapult, as well as a special landing device based on the mesh. A flying UAV must fly into the grid and literally get tangled in it, which allows you to safely return it to the deck.

So far, the Orlan-10 UAV is used only on small missile ships of the 22800 Karakurt Ave. The ship with the appropriate equipment was first shown to the public at the naval parade last year. Apparently, all of the following "Karakurt" will also be able to use multi-purpose UAVs, for which they will receive the appropriate equipment. Recently, information has repeatedly appeared about the possibility of using the Orlan-10 on frigates of 11356 ave. There are already three such ships in service, but not one of them, as far as is known, carries UAVs.

The number of UAV Orlan-10 in the Russian Navy is unknown. To date, more than a thousand such products have been built, and some of them could come at the disposal of naval aviation. In this case, it can be assumed that so far only a few drones have mastered the role of a ship scout.

In recent years, important steps have been taken to introduce and develop UAVs in the Navy MA. However, while the results of such work look modest enough and leave a lot of room for further activities. Unmanned vehicles are available on the coastal parts of all fleets, as well as on individual ships. Moreover, their total number is not too large, and in addition, only two types of complexes are in service.

This leads to obvious conclusions about the possible ways for the further development of the UAV MA group. First of all, we should expect the purchase and delivery of new Forpost and Orlan-10 devices, due to which the fleet will be expanded and updated. Such measures will provide quantitative results. 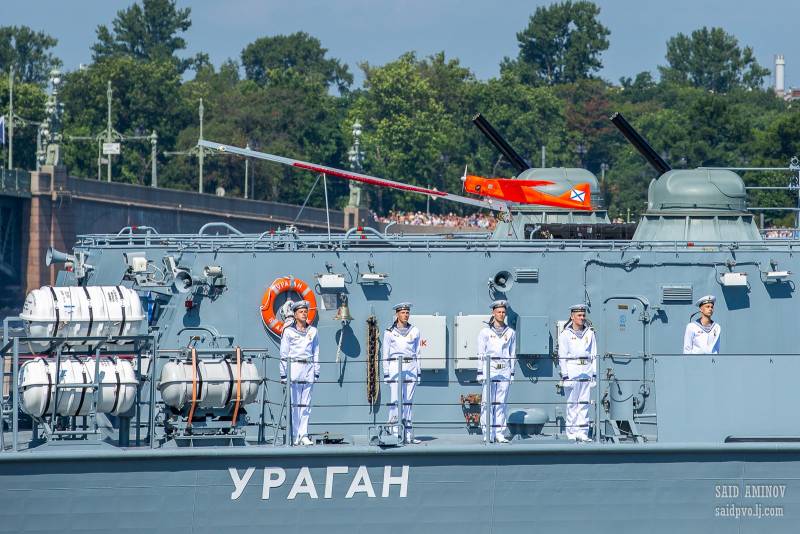 Qualitative growth should be ensured through the commissioning of new unmanned systems for various purposes. In the near future, the appearance of a modernized Outpost-M UAV with enhanced characteristics is expected. It is known about the development of a future replacement for the Orlan-10. Also, various enterprises offer numerous projects of other aircraft and helicopter-type UAVs designed to solve various problems.

The specifics of the MA allows us to consider it necessary to adopt a medium or heavy class helicopter UAV. A similar machine with one or another target equipment can become an addition or even a replacement for manned helicopters. She will be able to solve her problems, without making any special requirements for take-off and landing. An unmanned helicopter will be able to work from a regular flight deck.

With a view to the long term, the issue of creating a heavy reconnaissance and strike UAV of an aircraft type should be explored. A similar technique is just being created for the airborne forces, but in the future it may be useful for the Navy MA. Such drones can be used in land-based aviation and as part of the air group of a promising aircraft carrier.

It should be recognized that in matters of adoption and development of UAVs, the Russian Navy noticeably loses the Navy of other developed countries. There is a lag in the size of the unmanned fleet and in the number of its carriers. A smaller number of samples in operation should also be noted. Finally, existing domestic models lose to individual foreign products in the performance characteristics.

At the same time, it should be noted that over the past six years that have passed since the formation of the first UAV detachment, a fairly long way has been done and real results have been obtained. Dozens of drones are in operation, and all fleets have such equipment. New ways of basing and using UAVs are being developed.

Naturally, the development of the unmanned part of naval aviation of the Navy does not stop there. The appearance of new models of equipment and methods for its application is expected, which will increase the potential of not only MA, but the fleet as a whole. In fact, the unmanned fleet of naval aviation of the Russian fleet is still in the early stages of its development, but in the future it will have a great future.