August 17 2019
80
Great Britain is a conservative country, whose leadership has always been able to count money. Currently, the Army of the Misty Albion is the only tracked infantry fighting vehicle - BMP "Warrior". Serial production of the BMP began in the 1985 year, and in the 1987 year the combat vehicle was officially adopted by the British Army. She remains the only British infantry fighting vehicle in the 2019 year. 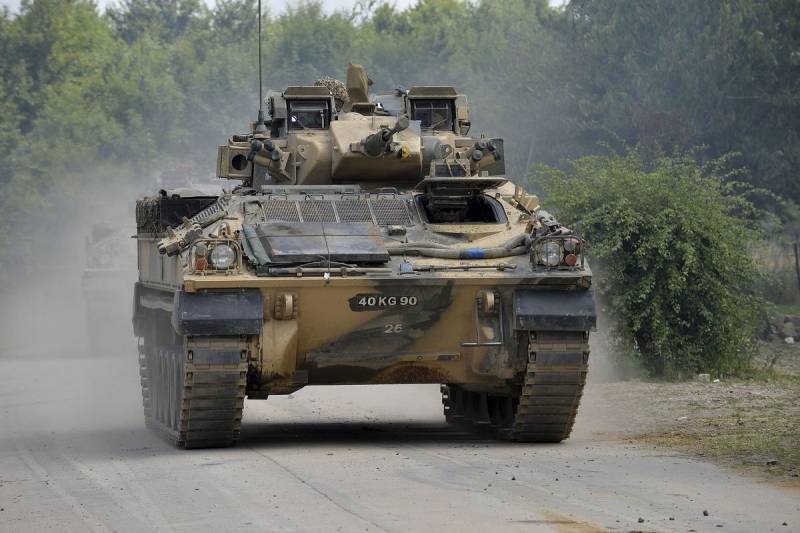 From 1985 to 1995, during the mass production years, British enterprises transferred over 1000 Warrior vehicles in various modifications to customers, including armored vehicles manufactured for Kuwait. 489 units were produced directly in the version of the infantry fighting vehicle for the British army, command-staff vehicles, armored repair and maintenance and recovery vehicles, artillery observer vehicles and other variants were also produced in separate series. Currently, these vehicles are being modernized, the British military expects to extend their life cycle until the 2040 year, although when the vehicles were launched into serial production, they were going to operate the BMP only until the 2010 year. In total, it is planned to upgrade the 380 units of Warrior, of which 245 will receive a new tower with an updated weapon system, the rest will perform auxiliary functions.

BMP Warrior: from project to implementation 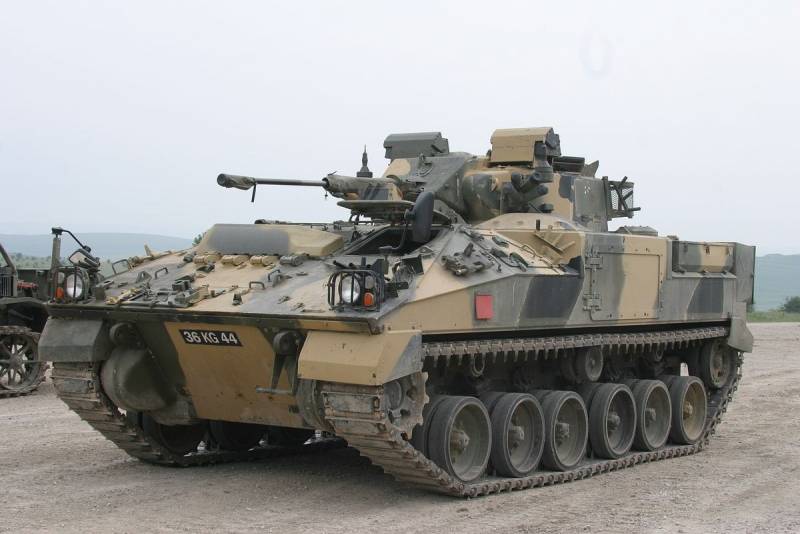 The British military put forward a number of requirements for the future infantry fighting vehicle. The key ones were: capacity - up to 10 people, including three crew members of the BMP; sufficient maneuverability for interaction on the battlefield with the main combat a tank Challenger security - from any small arms fire weapons, as well as fragments of shells and mines; the presence of weapons to combat any lightly armored targets of a potential enemy. At the same time, the priority in basic combat qualities of the future infantry fighting vehicle was placed as follows: 1. mobility, 2. security, 3. firepower.

The ready-made prototypes of the future BMP made a good impression on the British military and already in June 1980 the first MCV-80 prototypes were recognized as satisfying all the basic requirements, but bringing the tracked infantry fighting vehicle to the production model took several years. During lengthy tests of 12 pre-production combat vehicles, they successfully crossed 200 of thousands of kilometers, and were also subjected to shelling tests. One BMP model with implemented remote control was tested undermining an anti-tank mine. Bringing the combat vehicle to a serial model, which could be put into production, required designers and engineers to re-develop 250 units, components and assemblies of infantry fighting vehicles. Almost completely finished, two combat vehicles passed the first tests in the Middle East in 1983, and in the autumn of 1984 four more infantry fighting vehicles took part in military exercises held in Germany.

According to the initial plans, the army was ready to acquire 1900 new infantry fighting vehicles, and the total costs of the program were estimated at 1,2 billion pounds, but already in the 1981 year the order was reduced to 1053 infantry fighting vehicles, of which only 602 combat vehicles were supposed to get a tower with 30-mm automatic gun. In the end, GKN Defense released the entire 789 BMP for the British army, according to the classification adopted by the army, they received the designation FV510 and their own name Warrior. Moreover, in the linear, basic version with cannon armament, only 489 vehicles were made. 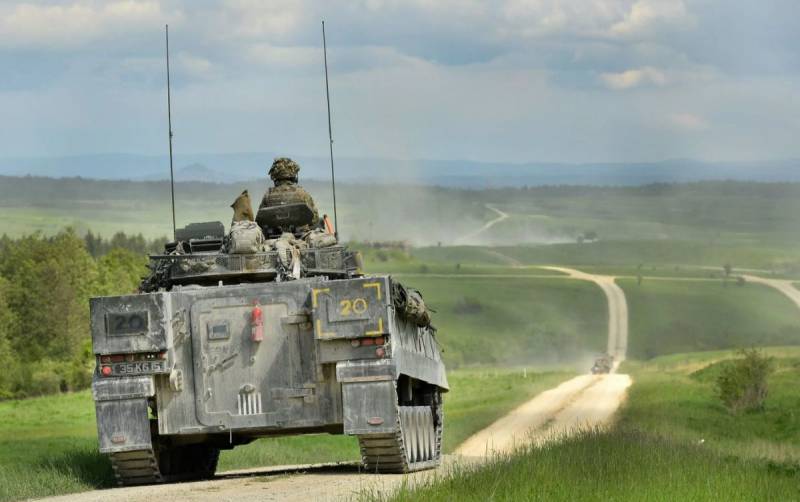 The layout and capabilities of the BMP

The new English caterpillar infantry fighting vehicle received the classic layout characteristic of infantry fighting vehicles of other countries of the world. In the front of the case, the designers installed the engine, and here was the place of the driver (to the left of the engine compartment). The middle part of the hull was occupied by a fighting compartment, which was crowned by a tower designed for the work of two crew members - the commander of the car and the gunner. At the rear of the BMP was an airborne squad, which could accommodate 7 infantry. The landing was carried out through a wide aft door, and fighters could also use double-wing hatches in the roof of the airborne squad to leave the combat vehicle. At the same time, loopholes for firing small arms were absent on the sides of the hull, and paratroopers sat facing each other (three along the port side, four along the right side). All seats crew and landing received seat belts.

The BMP is driven by the four-stroke 8-cylinder multi-fuel diesel engine Perkins-Rolls-Royce V8 Condor. The V-engine is paired with a four-speed automatic gearbox. Engine power is enough to provide a car with a combat weight of more than 25 tons a maximum speed of 75 km / h (on the highway). Cruising on the highway is 660 km. A curious feature is that the 12-cylinder version of the Condor diesel engine is installed on British Challenger tanks. Thus, the designers achieved a unification of the equipment produced, the engines of the infantry fighting vehicle and the main battle tank are included in one design series, which also simplifies the process of their operation and maintenance.

The welded case of the British infantry fighting vehicle is made of rolled sheet armor, the basis of which is aluminum-magnesium alloy, the octagonal tower is made of steel. The first versions of the combat vehicle provided the crew and the landing assault defense from small arms fire to large-caliber 14,5-mm machine guns inclusive. In addition, Warrior’s armor provided reliable protection against fragments of shells and mines, including the 155-mm caliber. Additional protection for the crew was ensured by an internal anti-fragmentation strike, additional protection for the paratroopers is the spare parts and equipment of the infantrymen themselves, which are stored in the space between their seats and the sides of the hull. During the upgrade, the machine’s protection was enhanced by the installation of additional armor, which provided protection against 30-mm shells in the frontal projection. British designers also thought about protecting the crew and the landing force from the effects of anti-tank mines and landmines. The bottom of the combat vehicle is able to withstand the detonation of 9-kg anti-tank mines. 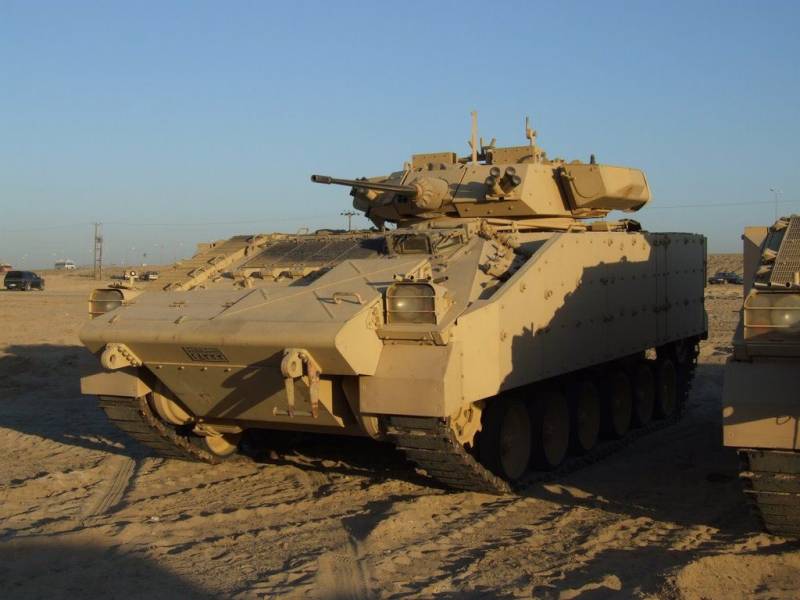 The main weapon of the new BMP was the 30-mm automatic gun L21A1, with which the 7,62-mm machine gun L94A1 was paired. It was believed that the capabilities of this weapon and the armor-piercing ammunition developed for it would be enough to fight the Soviet BMP-2. An interesting feature of the infantry fighting vehicle was that its weapons were not stabilized. According to British ideas about such military equipment, it could effectively fire at the enemy only from stops. In part, the lack of stabilization of the gun, and this, of course, is a drawback for the second-generation infantry fighting vehicle, was compensated by the low rate of fire, which amounts to 80-90 rounds per minute. At the same time, you can fire from an 30-mm gun either with single shots or in bursts of 3-6 shells, this is because the gun’s power is cluster (cartridges for an 3 shell). In addition to the low rate of fire, dampers were responsible for improving the accuracy of shooting, which the designers placed at the end of the barrel casing. These devices dampen oscillations of the gun barrel when firing.

BMP Warrior have established themselves as a reliable and well-protected machine. They took an active part in the hostilities in Iraq as part of Operation Desert Storm. They also participated in the conflict in Bosnia on the territory of the former Republic of Yugoslavia. During the fighting, the infantry fighting vehicle demonstrated good survivability, reliably protecting the crew and the landing force from shell fragments and mines, anti-tank missiles and rocket-propelled grenades, and explosive explosives on high-explosive bombs.

Projects to modernize the Warrior infantry fighting vehicle appeared almost immediately after the start of its mass production. The first modernization step was already taken in 1990-1991, when the British sent three motorized infantry battalions armed with the FV510 Warrior BMP to participate in the operation against Iraq. To participate in the fighting, the cars were modernized, their arms were expanded by installing two Milan ATGMs, which were placed on the tower. In the future, these ATGMs will be replaced by the American Javelin complex. 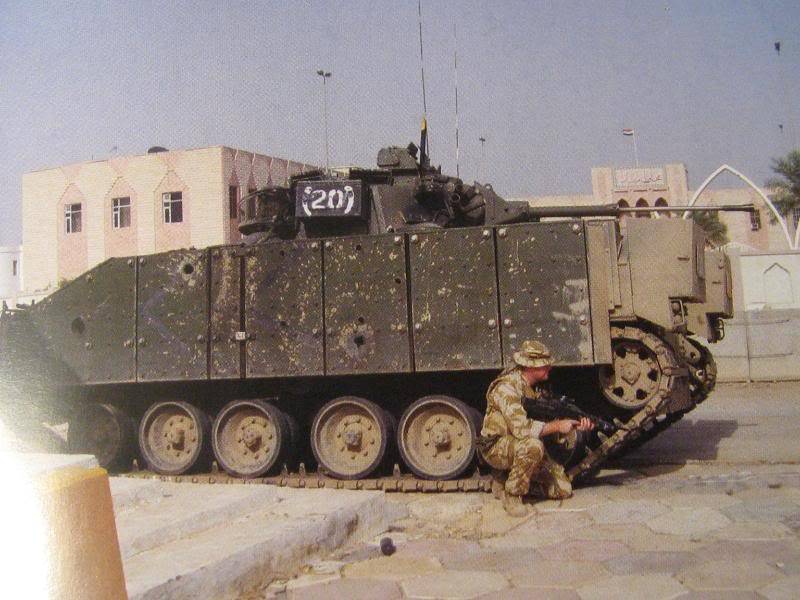 British designers also strengthened the protection of the car by installing additional armoring on the BMP. The same armor appeared on the infantry fighting vehicle as on the Challenger tank. It was a composite armor, which in the UK and English-speaking countries is called "Chobham" by the name of the Chobham tank research center, where it was developed in the 1960-s. This armor consists of many ceramic tiles placed in a special metal matrix, they are connected to the base plate by several elastic layers. Such display armor is highly effective in protecting armored vehicles from both cumulative and sub-caliber ammunition. There is a known case when during a military campaign in Iraq, one Warrior infantry fighting vehicle equipped with similar armor successfully survived 12 hits from hand-held anti-tank grenade launchers.

Following the completion of Operation Desert Storm, interest in the British BMP was predictably shown by Kuwait, which was liberated from Iraqi occupation. Especially for Kuwait, the British created a version of the combat vehicle, adapted for use in a hot desert climate. This BMP got its own name "Desert Warrior". The main difference is not adaptation to the desert climate, but the new LAV-25TOW tower, in which they installed the 25-mm M242 automatic cannon of the American company Bushmaster. Also, two launchers for launching TOW anti-tank guided missiles appeared on the tower.

Unrealized version of the BRM based on the Warrior BMP

One of the unrealized options for modernization remains the version of the combat reconnaissance vehicle (BRM) presented in the second half of the 1990's based on the Warrior infantry fighting vehicle. This model was also distinguished by the presence of the LAV-25TOW turret and an updated running gear, the number of track rollers in which was reduced from six to five, which made it possible to reduce the dimensions of the combat vehicle. This version was to be equipped with a new intelligence data collection complex, the center of the complex was a telescopic mast, which was located behind the tower. The feature of the machine, which was demonstrated in 1997 at the exhibition of equipment for the British land and naval forces, was also an unusual color. The car was completely black, according to the engineers of the company GKN Defense, this was supposed to increase the secrecy of the BRM. 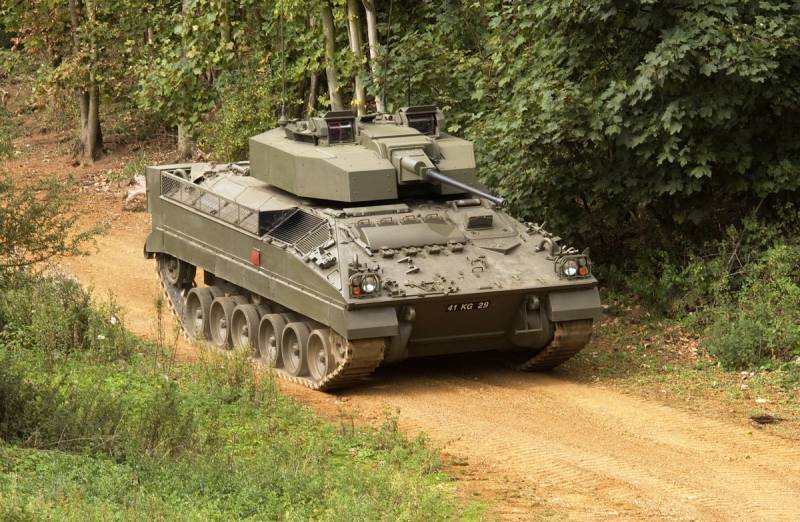 The latest version of the modernization of the “Warrior” infantry fighting vehicle, which is being implemented today in the UK and is supposed to extend the life of the vehicles to 2040 years, involves the installation of a new tower with an 40-mm automatic gun. This modification has already received an unofficial designation Warrior 2. The first eight modernized infantry fighting vehicles arrived for military tests at the British Army Test Center, located in Dorset in January 2018. The updated BMP gets at its disposal a more powerful 40-mm automatic cannon CTA International CT40, along with which telescopic ammunition is used. The fire control system is also seriously updated, which provides the combat vehicle with the possibility of all-weather and all-day use.