Short memory. In the DNI decided to play dictatorship

A split in society?

The clumsy conduct of a flash mob addressed to Ukrainian President Vladimir Zelensky, and, moreover, the absolute unwillingness to at least apologize to the public for the committed swine, naturally led to a response. At first, in the center of Donetsk, local mass-entertainers tried to hold a rally, which, in fact, was dispersed by non-violent methods. Then, on 8 of August, a number of local residents led by a Russian tried to hold a constituent congress of the organization, which they called the "Pro-Russian public movement" The Popular Front of Donbass. The meeting ended with the arrival of masked people who accompanied the organizing committee for a heart-rending conversation, after which all participants in the event received written warnings and went home. 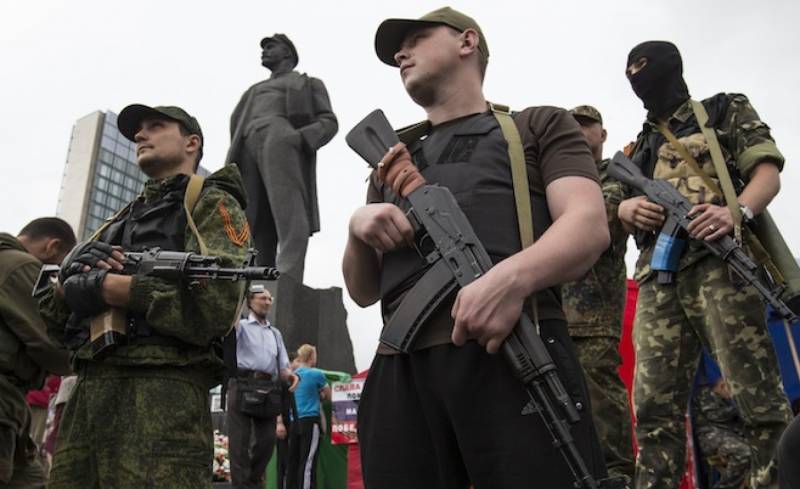 Lacking reliable information, it is rather difficult to judge the degree of danger of the failed social movement for the government of the DPR and the republic as a whole, however, I would like to emphasize the danger of the methods chosen by the local authorities. Forceful methods of suppressing dissent, firstly, are very, very similar to what is happening behind the line of demarcation, and secondly, they are fraught with rallying people who criticize the authorities into a full-fledged opposition with its subsequent marginalization and going underground. Violence always breeds only violence.

Censorship on the march

Caught in a flurry of criticism, representatives of the Donetsk “Ministry of Truth” and their controlled media and bloggers took a curious position: everyone who criticizes the actions of the authorities are enemies of the republic, Russia and personally President of the Russian Federation Vladimir Putin. Why? Yes, because everything that happens in the DPR happens, supposedly, with the knowledge of the Russian curators and almost "himself." So, the DNI authorities are infallible and holier than the Pope. How it was possible to get to such insanity and under the influence of any mental illnesses or psychotropic substances, it is difficult to say.

Donetsk clever men did not stop there. At the moment, the deputy of the People’s Council of the DPR Vladislav Brig is actively engaged in the preparation of a bill introducing responsibility for the distribution of “fakes”. And this, for a second, in a republic where the authorities act on 100% is not transparent, where absolutely all decisions, bills, indicators and numbers are hidden from the public, where today's headlines are contrary to yesterday’s and where the hell is still no many important laws , in connection with which it is necessary to use their Ukrainian counterparts.

Of course, even if Brig drags out his construct and another censorship tool appears in the DPR (is it worth saying that local media are censored to the last comma?), All this will only lead to the total departure of people who criticize the actions of the authorities on social networks.

The war of mice and frogs

In principle, this is already happening. There were few dozens of groups in the FB, VKontakte, and Odnoklassniki, so now the Donetsk feuds spilled over into Telegram. Over the past month and a half, dozens of groups devoted to current events in New Russia have appeared in the messenger. Moreover, the overwhelming majority of them are openly engaged - some support the authorities, some against.

It is not possible to figure out who (except for the “Ministry of Truth” of the DPR) allocated money for this disgrace, but the sight itself is extremely instructive. Not having time to be born, all these “resources” immediately entered into a sweaty battle with each other, just a few weeks later slipping down to the argument “a fool is a fool himself”, only from his mother.

What semantic load is this permanent squabble is impossible to understand. Probably, it all started with the desire of the DPR government to form its own pool in Telegram, to which the enemies of the Pushilin government from neighboring countries and other indifferents gladly responded. In any case, the result was ugly - instead of information battles, a continuous mutual demonstration of the opponents' dirty laundry.

Where are we going?

All this storm in a glass of water gradually begins to spill over the Internet and threatens, sooner or later, to become a serious problem that can split society in the republic. Moreover, the criticism and indignation of the dissatisfied are not so terrible as the attempts of the DPR government to explain to the local population who the boss is here.

Given the significant number of other, well-founded reasons for discontent, creating additional ones is at least silly. Nevertheless, either with the knowledge of the head of the republic, or without it, but local officials have embarked on the final destruction of civil liberties. They probably forgot that the rebellion in the Donbass in many respects began precisely with Kiev’s attempts to impose its will on the local population ...