August 15 2019
32
August 15 marks the 95th anniversary of the birth of Hero of the Soviet Union Suren Akopovich Kasparyan. The brave Soviet gunner in one of the battles knocked out five of his guns at once tanks the enemy. And this is only one of the exploits of Suren Akopovich during the war. 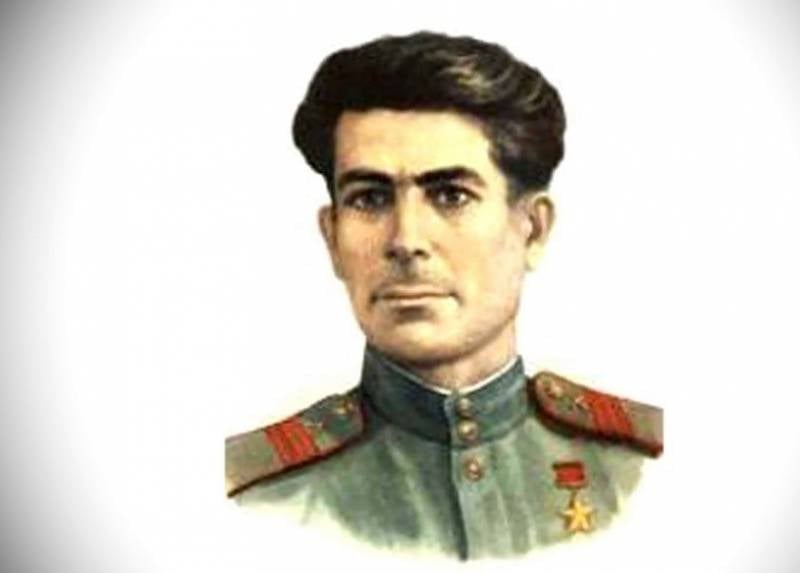 Fight on the Magnushevsky bridgehead

In August 1944, Soviet troops pushed the Nazis to the west. The troops of the 1 Belorussian Front under the command of the Marshal of the Soviet Union Konstantin Konstantinovich Rokossovsky carried out the Lublin-Brest offensive operation, liberating the western regions of Belarus from invaders.

At the very beginning of August, units of the 8 Guards Army, commanded by Colonel General Vasily Ivanovich Chuykov, crossed the Vistula and occupied a site on the left bank of the river. So they ended up in the area of ​​the city of Magnuszew, which is 60 kilometers from Warsaw.

Crossings were made by engineering units, and by the end of the day 1 August 1944, units of the 25, 35, 57 and 79 Guards Rifle Divisions were transferred to the left bank of the Vistula. Soviet soldiers managed to expand the occupied bridgehead to 15 kilometers in front and to 5 kilometers in depth. 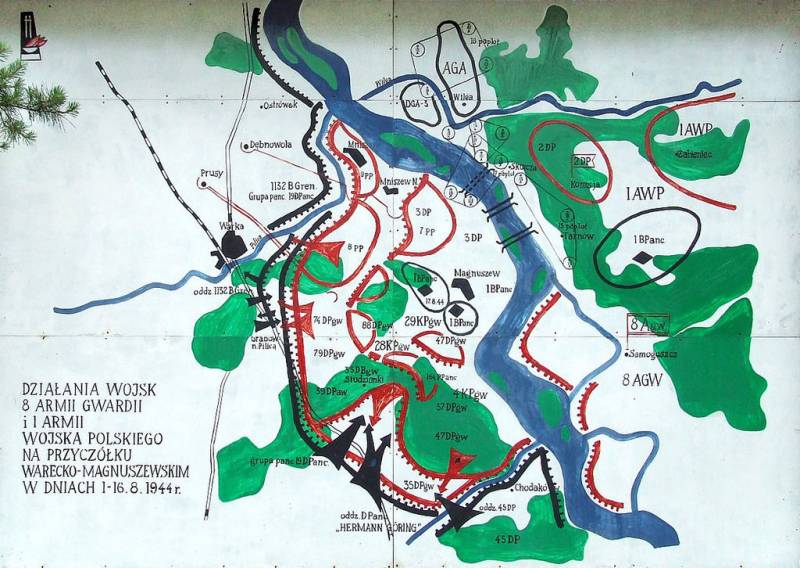 Already on August 2-4, units of the 8-th Guards Army managed to completely occupy Magnushev and expand the bridgehead to 44 kilometers along the front and to 15 kilometers in depth. So the site occupied by Soviet troops was named Magnushevsky bridgehead.

The fights were fierce. Already on August 5, the Nazis launched a counterattack, throwing 2 tank and 1 infantry divisions into Soviet positions. Hitlerites covered from the air aviation - Luftwaffe aircraft made up to 600 sorties per day, attacking the positions of the Soviet troops.

Later, Marshal Rokossovsky recalled that the defenders of the Magnushevsky bridgehead as part of the Lublin-Brest operation had a particularly difficult time. And the most outstanding role in the victory of the Soviet troops belonged to the army commander, Colonel General Vasily Ivanovich Chuykov, one of the most talented Soviet military leaders.

I must say bluntly that we managed to defend it largely because the defense was led by the commander of the 8th Guards Army Vasily Ivanovich Chuykov. He was there all the time, in hell itself. True and the front command did everything to provide timely assistance to the fighting forces with front-line means and aviation,
- wrote later Konstantin Konstantinovich Rokossovsky.

The command was forced to send the 8-th Panzer Corps of the 16-th Panzer Army, the 2-th Infantry Division and the 3-th Panzer Brigade of the 1-th Army of the Polish Army to help the 1 Guards Army. From the air, Soviet troops and Polish soldiers covered the planes of the 6 and 16 air armies. As a result, despite the fierce onslaught of the Nazis, the Soviet and Polish soldiers managed to repel their attacks and retain the Magnushevsky bridgehead. The importance of the Magnushevsky bridgehead was once again confirmed during the Warsaw-Poznan operation of the 1945 of the year - in January of the 1945 of the year, it was from this bridgehead that the troops of the 1 Belorussian Front delivered powerful blows to the positions of the Nazis who were trying to defend the territory of Poland from the advancing Soviet units. 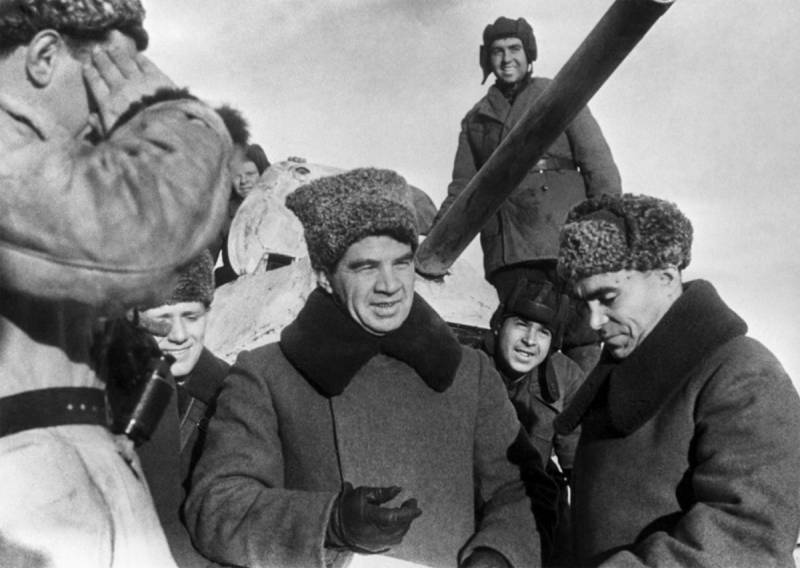 On August 20 of 1944, during the next fights on the bridgehead, Hitler's command threw infantry and 40 medium and heavy tanks into Soviet positions. 19 tanks attacked the firing point of the 86 Guards Separate Fighter-Anti-Tank Division of the 82 Guards Rifle Division of the 8 Guards Army.

The gunner at the point was Guard Sergeant Suren Kasparyan. Five days earlier, on 15 of August, he was only twenty years old. But the young man had already had a year of war and almost two years of service in the ranks of the Red Army.

Suren Akopovich Kasparyan was born on August 15 1924 of the year. That is, he belonged to the generation most affected by the war - it was his peers who made up the bulk of the conscripts and young Soviet lieutenants. It was them who were born in the early twenties of the twentieth century that this “terrible war” most “thinned”. Yesterday’s tenth graders, students, young workers, Soviet boys and girls went to the front. And not everyone managed to survive.

By the way, the Armenians have proven themselves during the years of World War II. To this day, people's memory keeps the names of the famous Soviet military leaders Baghramyan, Babajanyan, brave heroes Gukas Madoyan, Garegin Balayan, Sergey Oganov, Lazar Chapchakhov, an amazing intelligence officer Gevork Vartanyan and many other outstanding children of the Armenian people. Many of the Armenians gave their lives on the fronts of World War II, defending their homeland, the Soviet Union, from the enemy. Among the Armenians - heroes of the Great Patriotic War, the artilleryman Suren Akopovich Kasparyan also occupies an honorable place.

The Karabakh Armenian, Suren was from the village of Kylyzhbakh, Stepanakert district of Nagorno-Karabakh. His parents, simple peasants, soon moved to permanent residence in Tashkent - the capital of the Uzbek SSR. There, in those years, industry was actively developing and labor was required. In Tashkent, young Suren graduated from high school on the basis of 7 classes, after which he got a job as a turner at the Gorky Tashkent shoe factory. In general, Suren went along the standard path of the Soviet working boy - a typical representative of his generation. 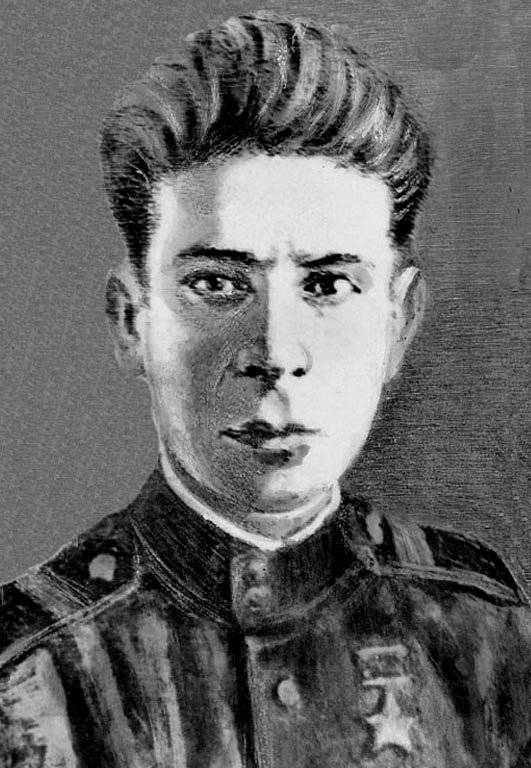 In Tashkent, the young man met the beginning of the Great Patriotic War. But since he was not yet 18 years old, Suren was not drafted into the army. It only became operational in the Red Army a year and a half after the German attack on the Soviet Union - in December 1942. He was sent to study in the regimental school of artillery gunners, after which Suren received the rank of sergeant and in October 1943 of the year he was sent to the front, as part of the army.

Sergeant Kasparyan served as a gunner in the very 86 Guards Separate Anti-Tank Fighter Division of the 82 Guards Rifle Division of the 8 Guards Army, General Chuikov, who fought fierce battles on the Magnushevsky Square in August 1944. In battles on the bridgehead, the young man also met his second anniversary in his life - he was twenty years old. But Sergeant Kasparian 15 met this date on August at the Magnushevsky bridgehead, in the hardest battles with enemy troops.

The Nazis tried to knock out Soviet soldiers from captured positions, using the power of tank units thrown at Magnushevsky bridgehead. It seemed to them that heavy German tanks would be able to crush the Soviet units and free the captured area from the Soviet infantry.

19 enemy tanks moved into battle on the gunpoint of Sergeant Kasparyan. The Soviet sergeant entered into an unequal battle with superior enemy forces. But the first shot from the gun he managed to knock out an enemy tank. The armored monster caught fire, which inspired the gunner and he continued to fire at Hitler’s vehicles advancing on him.

Four more German Tiger tanks flashed one after another. Hitler's officers, confident that they would be able to suppress the resistance of the Soviet guns, doubted the success of the offensive - they saw what happened to five of the nineteen tanks thrown into the offensive. Thus, Kasparyan knocked out a quarter of all the tanks advancing on him. And the Nazis began to retreat, which inspired the Soviet soldiers who switched to a counterattack.

But one of the tanks managed to get to the gun point with several shots and destroy the gun. Sergeant Suren Kasparyan was seriously injured. But in this state, he remained on the battlefield until the commander ordered to transfer the wounded warrior to the rear. The feat of the sergeant-gunner became an impressive example of the military courage of Soviet soldiers. Regardless of nationality, Soviet soldiers died, were injured, but fought to the last, freeing their native land from Nazi invaders.

The award sheet of Sergeant Kasparyan was personally signed by the commander of the 8 Guards Army, Colonel General Chuykov. In the document, the commander noted that the sergeant, with his feat, inspired the infantrymen to move forward, as a result of which the bridgehead in the Vistula area was captured and expanded. Sergeant Kasparyan was presented to the high rank of a Hero of the Soviet Union and on November 18 of November 1944, by a decree of the Presidium of the Supreme Soviet of the USSR, was awarded the Gold Star of a Hero. 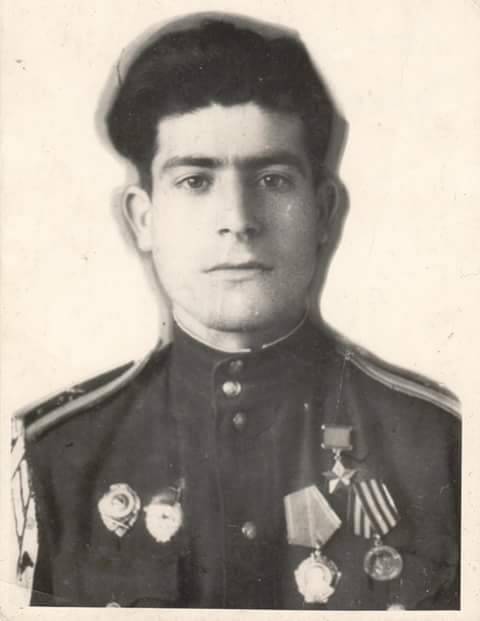 Suren Akopovich got it quite deservedly, because he made a real feat - he managed not to get lost and knocked out five Nazi tanks from one gun. Unconditional evidence of the sergeant’s courage was the fact that even the wounded, he did not leave his position.

Hero of the Soviet Union Suren Kasparyan continued to serve in the Red Army until 1947, when he was demobilized. After the war and demobilization, Suren Kasparyan returned to his native Tashkent, worked at a local garment factory. A simple and modest man, he returned to a peaceful life - the very one for which he fought and for which millions of his contemporaries gave their lives.

But in 1951, he was again drafted into the Soviet Army, graduated from courses at the Rostov Artillery School, and in 1952, from lieutenant courses at the Odessa Artillery School named after Mikhail Vasilyevich Frunze, after which he received officer epaulets. Suren Kasparyan continued his service in the army until the 1956 of the year, when he entered the reserve with the rank of captain.

After leaving the reserve, Suren Kasparyan moved to the Armenian SSR, to its capital Yerevan, where he got a job as a foreman at the Yerevan Automobile Plant. He honestly lived and worked at the factory until his retirement. Suren Akopovich Kasparyan died on 3 on January 1994, before he reached his seventieth birthday.

The life and feat of Suren Kasparyan is another evidence of the international participation of Soviet citizens in the Great Patriotic War. The victory over Nazi Germany was forged by joint efforts, the joint blood of all Soviet people - Armenians and Azerbaijanis, Russians and Jews, Ukrainians and Tatars, Uzbeks and Kyrgyz. Each Soviet people made its own individual contribution to the great cause of liberating the country from German invaders.

Today, in some of the former Soviet republics, nationalists who reject the Soviet Union raised their heads historyarguing about an imaginary "Soviet occupation". But denying the great role of the USSR, including in the formation of their own states, they spit on their own history, insult the memory of the heroes of their own peoples, who side by side, shoulder to shoulder stood against the invaders, together built a single state - one of the strongest world powers.

Ctrl Enter
Noticed a mistake Highlight text and press. Ctrl + Enter
We are
Marshal ChuikovHero of the Soviet Union Suren Kasparyan
32 comments
Information
Dear reader, to leave comments on the publication, you must to register.