Intelligent Iranian Air Force gear in a likely conflict with the Arabian coalition. Are there any prospects?

August 15 2019
30
Against the backdrop of the recent “tanker war” that erupted in the Persian and Oman Gulfs, artificially modeled and sensitively supervised by the Pentagon, as well as numerous Israeli, British and Arabian intelligence structures to discredit Tehran in the eyes of the leaders of the leading EU and Near East Asian states, the Iranian Armed Forces General Staff had to go radical measures to prevent provocative actions that could escalate into a massive regional conflict in the bay. Thus, on the instructions of the command of the Islamic Revolutionary Guard Corps, over the past few weeks, the leading state television channels of Iran have saturated the air with a number of interesting reports on the presentation of promising products of the country's defense industry. 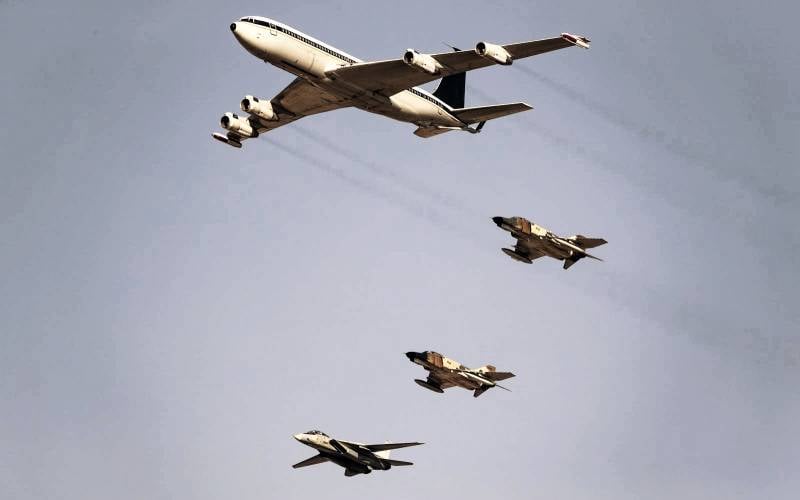 Guided and planned bombs of the Ghaem, Yasir and Balaban families are an excellent answer to the American narrow bombs and JDAM-ER kits

Undoubtedly, the broadest range of precision instruments weapons air-based, presented by guided bombs with “Ghaem-1” and “Ghaem-9” (conceptual analogues of Turkish guided munitions MAM-L), adapted for use from the suspension units of the reconnaissance UAV “Mohajer-6” and “Ababil-3” as well as the planned guided bombs "Yasir" and "Balaban", used from the suspensions of the front-line fighter-bombers Su-22M4 and Su-24M of the Iranian Air Force and representing analogues of the planning UAB GBU-53 / B "Small Diameter Bomb II" and standard bombs Mk 82 equipped with JDAM-ER kits. A distinctive feature of these “smart” bombs is a small radar signature (effective scattering surface / EPR) of the order of 0,07 — 0,15 square. m, which reduces the range of their detection with the help of American ship Aegis radars AN / SPY-1D (V) about 3-5 times (from 320 to 60-100 km), leaving operators of Aegis systems a minimum of time for reflection a massive missile and bomb strike from the Iranian Air Force.

These bombs, equipped with infrared and semi-active laser homing heads in combination with GPS correction and an inertial navigation system, have excellent efficiency in difficult jamming environments and are full-fledged analogs of the above American bombs, losing the latter only by the criterion of range. Meanwhile, it must be remembered that for the successful use of the Ghaem-1/9 aerial bombs, as well as the Yasir and Balaban, for the Marine Corps units that advanced into the area of ​​the western coast of the Persian Gulf (Qatar, UAE, Bahrain, etc. .), tactical manned and unmanned aviation The Iranian air force will have to overcome the most powerful anti-aircraft “barrier” over the Persian Gulf, formed by the ship’s AJIS BIUS and the PAAMS air defense missile systems, deployed on the US Arleigh Burke class missile destroyers and the Daring class air defense destroyers.

Without partial suppression of the “anti-air umbrella” over the Persian Gulf, it would not be possible to use “smart bombs”

Unfortunately, in this field, the “antique” Iranian Air Force tactical fleet will not have much chance of success. RIM-174 ERAM (SM-6) anti-aircraft guided missiles, deployed in the Mk 41 launchers of the American Arleigh Burke destroyers and integrated into the Aigis' information field, are capable of hitting the Iranian tactical fighters Su-22М4, F-4E the upgraded F-7, as well as Su-24МК front-line bombers at the 180-250 km distance (long before they reach the lines of application of “smart” bomb equipment) At the same time, interception can be realized even if some Iranian tactical fighters and UAVs by some miracle can Orval "umbrella VOP 'of deck mounted multifunctional fighter F / A-18E / F« Super Hornet », and tries to overcome the low-altitude mode Arabian Gulf, hidden from detection shipborne radars AN / SPY-1D (V) outside the radio horizon.

The fact is that the RIM-174 ERAM anti-aircraft missile has an active radar seeker, as well as a module with an asynchronous data channel over the Link-16 network. This channel can be used for receiving RIM-174 ERAM missiles target designation from carrier-based aircraft AWACS E-2D Advanced Hawkeye, which will accompany low-altitude Iranian fighters and UAVs, inaccessible to detection and tracking by ship's radar. Consequently, Iranian fighters can also be intercepted outside the radio horizon.

The conclusion suggests itself: to use the aforementioned guided aerial bombs on the American military infrastructure on the west coast of the Persian Gulf of the Iranian Air Force will be able only after a preventive massive anti-ship strike on ship strike groups of the 5th operational fleet U.S. Navy and Royal Navy. To carry out such an attack, the missile brigades of the Islamic Revolutionary Guards Corps have hundreds of Khalij Fars anti-ship operational-tactical ballistic missiles deployed on mobile mobile soil launchers in the Khormozgan ostan.