In the Amur Region, a NATO soldier was depicted on a WWII monument

August 13 2019
95
The silhouettes of NATO soldiers with the M16 rifle were depicted by the "specialists" of one of the companies that restored the monument to soldiers who died during the Great Patriotic War in the village of Dipkun, Tyndinsky district, Amur region. It is reported by RIA News with reference to the deputy of the district Council of People’s Deputies Valery Vetelkin. 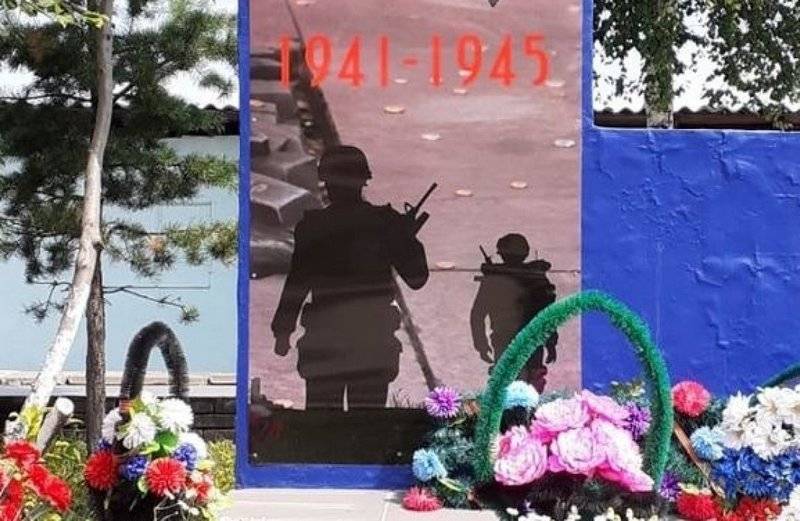 As explained by Vetelkin, a monument to the dead soldiers of the Second World War was installed in the center of the village about 20 years ago. During the renovation work, a panel was installed on it, which depicts the silhouettes of NATO soldiers with the M16 automatic rifle with an under-barrel grenade launcher. Local residents who saw this "creation" expressed indignation and demanded to remove this image.

The State Inspectorate for the Protection of Cultural Heritage Sites of the Amur Region said that the monument is not in the register of cultural heritage.

At the same time, the village administration assured that in the near future the image on the monument will be replaced.

In general, there are dark silhouettes (on the updated monument - approx.), There is nothing there, they are not visible. Then someone saw that the sight sight on the machine wasn’t the same. On June 23, it was negotiated with a company that did all this, that there would be a replacement. Now this company is repairing a kindergarten, then they will begin replacing panels
- the agency cites the statement of the acting Irina Sokolnikova, the head of the administration of the village of Dipkun.

Note that the image of NATO soldiers on the monument to the dead soldiers of the Second World War is far from the first, and not the last, most likely. More and more often, banners appear with an inverted Russian flag, the image of foreign military equipment on greeting cards and posters for February 23, etc. etc. In each case, the identification of such facts, the authorities hide behind the "incompetence of the performer", but it is worth considering where this "incompetence" comes from.