3 September 2019
73
Knights and armor. At the beginning of the XV century armorintended for tournament fights on spears have been completely modified. Concern for increasing the safety of knights who fought in the tournament, and the constant pursuit of its entertainment, led to the appearance of particularly difficult, special armor that minimized the possibility of serious injury. The fights themselves on spears began to be called Gestech (from it. Stechen - stabbing). Accordingly, the armor for such a duel became known as "Shtehtsoig." It is clear that in different countries of Europe, armor had its own local differences. However, in fact, there were only two armors of this type: the German shtehtsoig and the Italian. 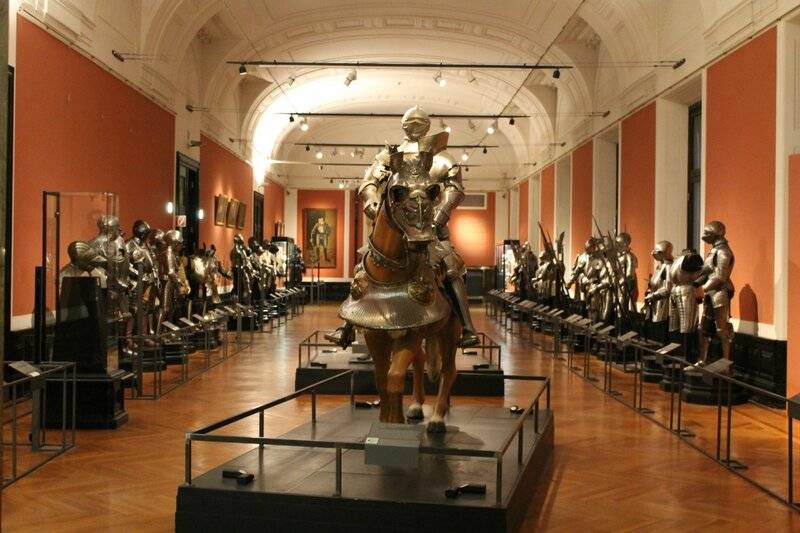 The armor in the Vienna Imperial Arsenal occupies eight large halls surrounding a domed courtyard with loggias. Right in front of us is a rider in sumptuous corrugated armor, covering not only himself, but also his horse. In the next photo we will consider it in more detail. 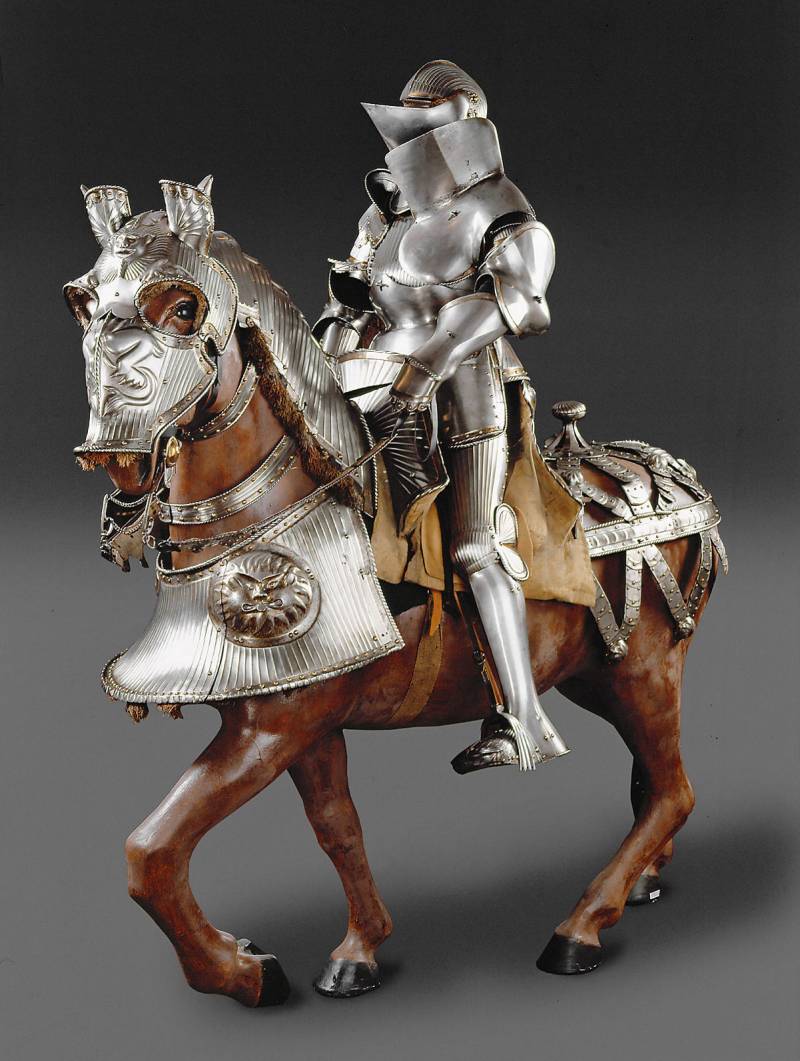 This luxurious set of Ferdinand I for the rider and his horse could be used both in battle and in the tournament. Since the cost of combat and tournament armor in the 16th century began to go wild, plate headsets came into fashion, the details of which could be changed and thus had several armor at once at the same time, with significant cost savings. Nevertheless, the cost of such a headset was extremely high, and not surprisingly. After all, its details were corrugated, and corrugated armor is more labor-consuming to manufacture. Their edges were trimmed with gold on a blue background, depicting curls, trophies, fabulous animals and figures of people in the late style of the Augsburg master Daniel Hopfer. The reliable attribution of the belonging of this armor to Ferdinand I and the master Colman Helmschmidd was carried out with the help of the Tuna Codex, lost in the 1945 year, in which there were preliminary sketches relating to the orders of the Habsburgs at the workshops of the Helmschmids. Exhibited armor in the hall №3. The owner is Emperor Ferdinand I (1503 — 1564), the son of Philip of Habsburg. Manufacturer: Coleman Helmschmid (1471 — 1532 gg., Augsburg), as evidenced by his stigma. Materials and manufacturing techniques: corrugated wrought iron, gold, brass, leather.

The classic German shtehtsoig consisted of several parts. First of all, a new helmet was invented for him, which received the peculiar name “toad head”. Outwardly, it somewhat resembled old helmets-pots, its lower part also covered the face from neck to eyes, the back of the head and neck, but the parietal part was flattened and the front part was very elongated forward. The viewing gap was designed in such a way that in order to look through it, the knight had to tilt his head forward. As soon as it was raised, this gap became inaccessible to any weapons, including the tip of the spear, and all of its protective properties were based on this particular feature of it. Attacking the enemy, the horseman bowed his head, but immediately before the blow, with a well-aimed spear, he raised it and then the enemy spear, even if it fell into the helmet, could not do its owner the slightest harm. There were paired openings on both the toe and on both sides of the helmet; some served for fastening helmet-mounted jewelry, while others served for leather straps that pulled the comforter underneath. 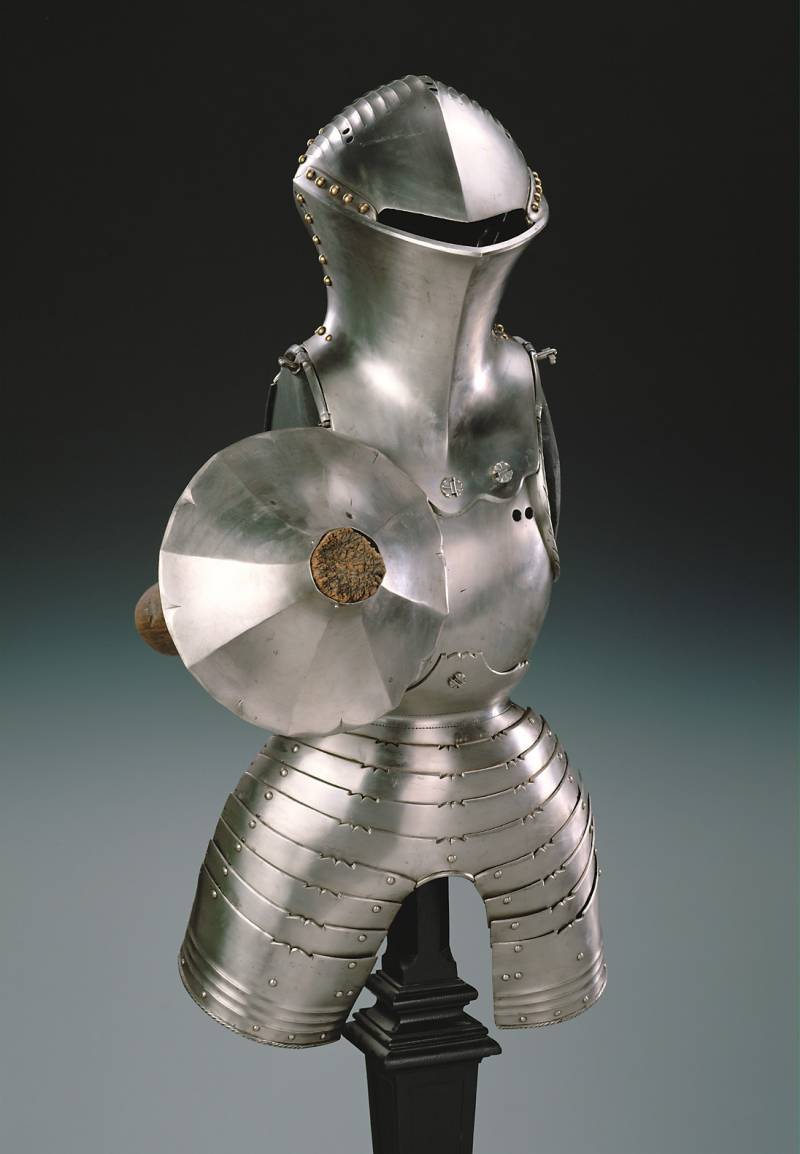 Incomplete Stojceug of Emperor Maximilian I

The breastplate of this armor was short. The cuirass's left side was convex, and the right side, where the spear hook was located, was flat. By the way, this hook, which appeared precisely on these armors, became simply necessary, because the spear has now gained weight and holding it with one hand has become almost impossible. The helmet was mounted on the chest with three screws or with a special clamp. On the back, a helmet with a cuirass was connected by a vertically placed helmet bolt, which created a very strong and rigid structure. On the right side of the cuirass’s chest was a massive spear hook, and on the back there was also a bracket for fixing the back of the spear. On the left side of the cuirass, two holes are visible that sometimes replace the massive ring. All this was necessary for attaching a hemp rope, with the help of which a tarch shield was tied to the left side of the chest. The tarch was usually wooden and covered with leather and ... bone plates. Its width was about 40 cm, length about 35 cm. Before the fight, such a tarch was covered with fabric of the same color and pattern with horse blanket. Legs were protected by lamellar gaiters reaching to the knees. The lower part of the cuirass rested on the saddle and thus supported the full weight of this armor. 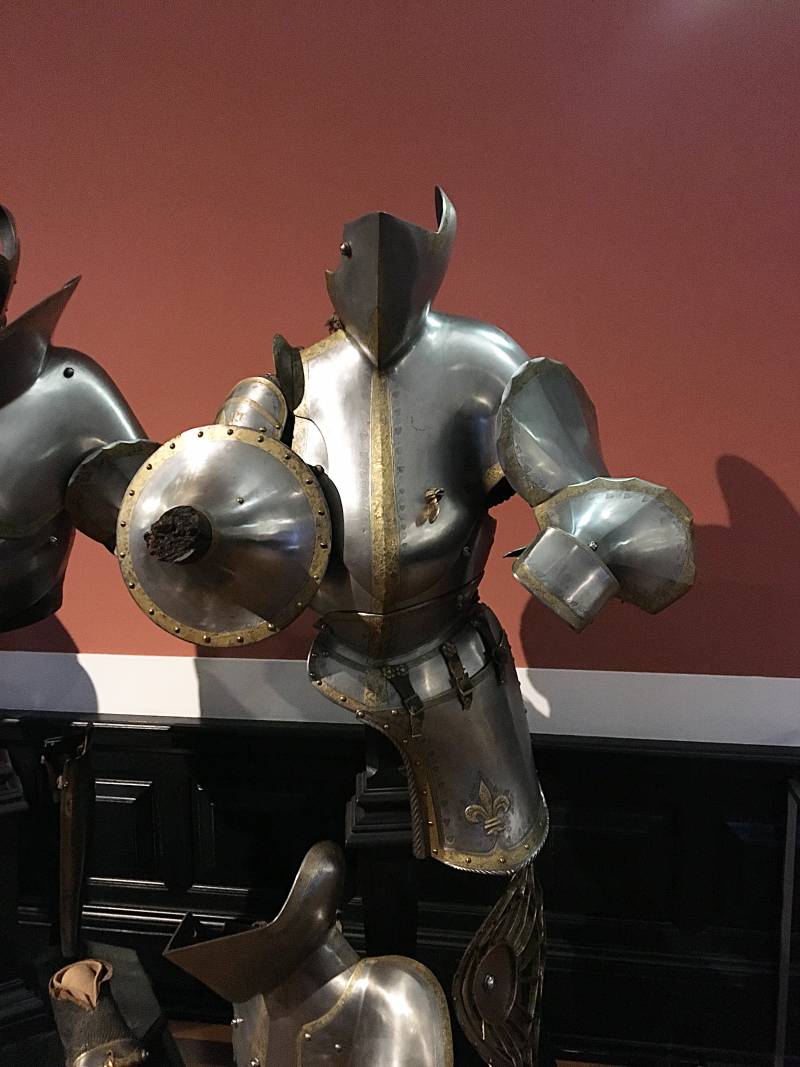 And here is another curious “armor”: the Grand Guard of the tournament headset of King Francis I (that is, an additional patch armor that easily turned ordinary combat armor into tournament armor!). In 1539, the tournament armor set along with a spear shield (template) were ordered by Emperor Ferdinand I for the French king Francis I as a gift. Master Jörg Seusenhofer personally went to Paris to measure the king. The design of the armor was carried out by several masters at once, as evidenced by some eclecticism of its patterns. In 1540, the work was completed, but the gift itself was not given due to deteriorating relationships. As a result, the armor got to Vienna, from where in the 1805 year Napoleon took them to Paris, where most of them remained (Museum of Art, Inv.G G 117). In Vienna, left a guard and a template. Such armor was intended for group combat on horseback, the purpose of which was to knock the enemy out with a heavy blunt spear from the saddle. At the same time, horses galloping towards each other were separated by a barrier called pallium. As for the reasons for the donation, they are connected with the fact that King Francis I of France at that time four times fought with Emperor Charles V for supremacy in Italy. He was captured at the Battle of Pavia in the 1525 year and was released only in connection with the Peace of Madrid concluded in the 1526 year. In a short period of peace between 1538-1542 years. between the Habsburgs and Francis I these armors were created. The deterioration of relations prevented the delivery of the gift to the French king. Manufacturers: Jörg Zeusenhofer (1528 - 1580, Innsbruck), Degen Pirger (etching) (1537 - 1558, Innsbruck). Material and technology: wrought iron, the so-called white armor with etched gilded pattern.

It should be noted that, as a rule, a pleated skirt made of fabric, decorated with luxurious embroideries and falling down on the hips with beautiful folds, was usually worn on the shtehtsoig. The spear shaft was made of soft wood, and had a standard length of 370 cm and a diameter of about 9 cm. The tip was crowned and consisted of a short sleeve with three to four not too long but sharp teeth. A protective disk was put on the spear, which was screwed to the iron ring on the spear shaft. 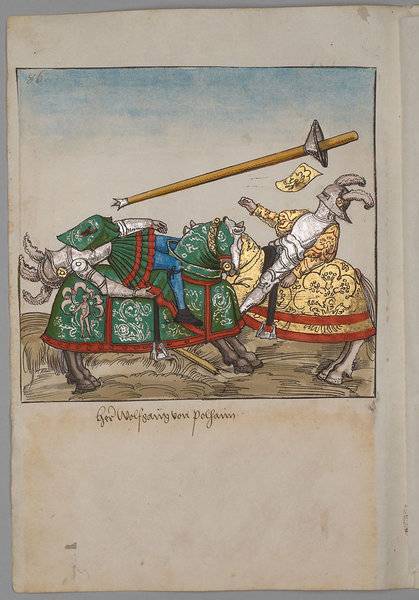 A knight (left) in a pleated skirt was knocked out by a spear from the saddle. The Tournament Book of Emperor Maximilian I (1459 - 1519). (Vienna imperial arsenal). 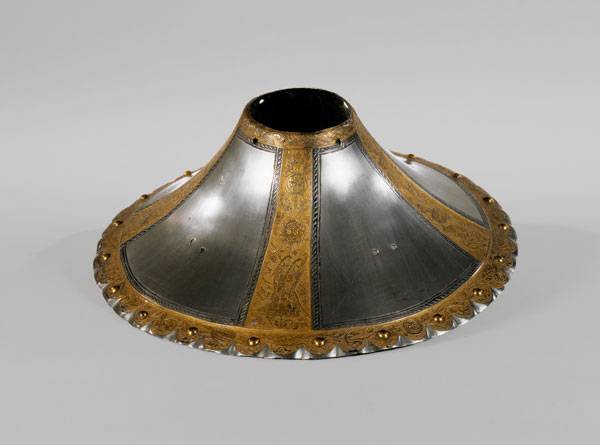 Another very important piece of armor for a spear duel is the protective disk template. Belonged to Emperor Maximilian II (1527 - 1576) and was made in Augsburg c. 1548 / 1550 on the occasion of the election of Maximilian II as king of Bohemia, along with tournament armor. The Augsburg gunsmith Matteus Frauenprays worked on its manufacture, who made two replaceable disks at once. Refined ornaments, gilded stripes with patterns belong to etching artist Jörg Sorg. 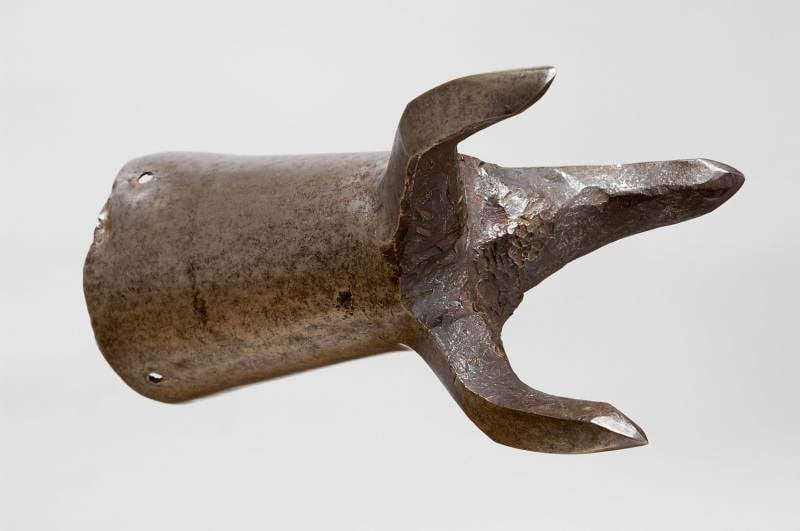 “Troikik” - the tip of the tournament spear from the armor of the stekhtsoig of Emperor Maximilian I. It is exhibited in Hall No. 1.

Spurs, although they are not shown here, had the same design for all varieties of tournaments. They were made of iron, although on the outside they happened to be covered with brass. Their length reached 20 cm. At the end there was a rotating star. Spurs of this form allowed the rider to control the horse during the tournament. The saddle had high, metal-clad bows, which gave good protection to the rider even without any armor. 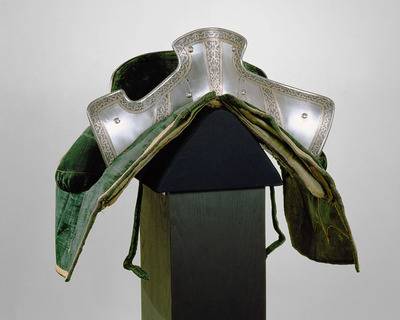 Saddle of Archduke Charles II, son of Ferdinand I, 1563 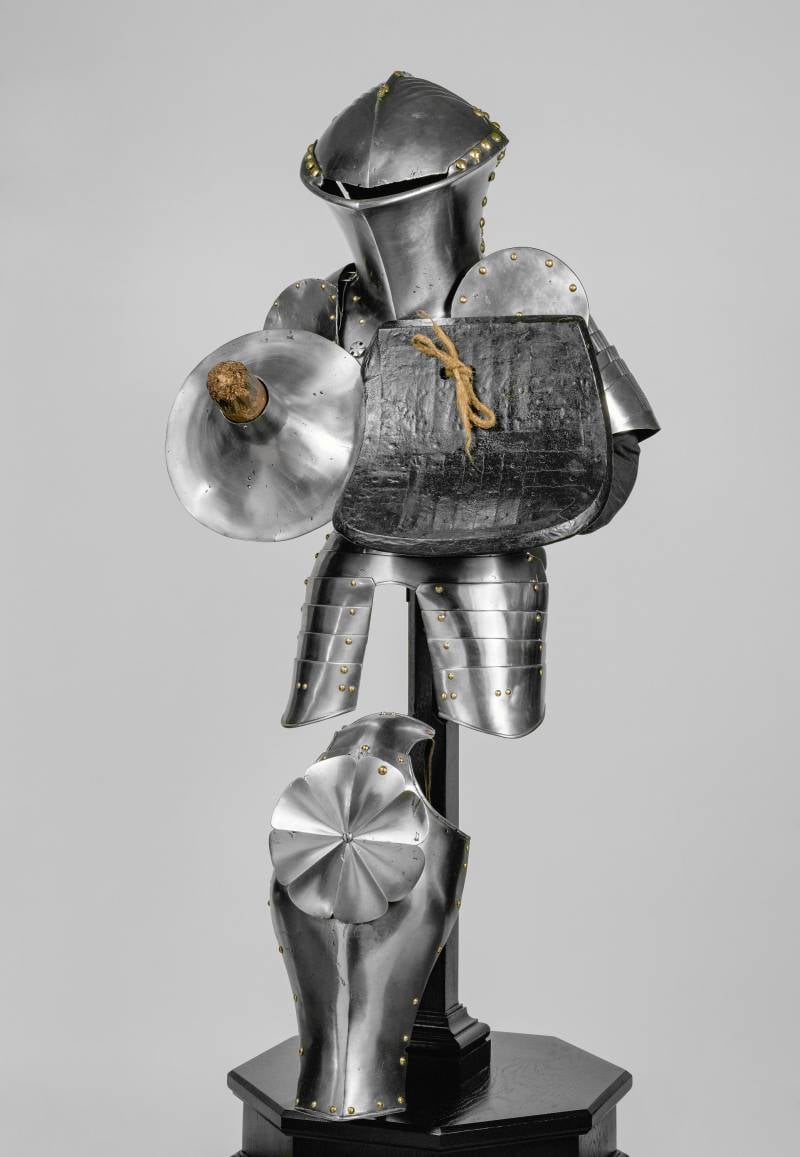 Typical shtehtsoyg, approximately 1483 / 1484 gg. owned by Archduke Sigmund of Tyrol, son of Emperor Frederick IV (1427 - 1496). A heavy tanker weighing about 40-45 kg consisted of carefully designed equipment elements that were firmly connected to each other, so that a person who was inside such armor was almost completely protected from possible damage. The goal of the duel was to hit a thick wooden shield with leather upholstered with a spear tied to the chest of the knight on the left. The creator of this armor was Caspar Reader, one of the many Tyrolean armor masters who worked in the suburbs of the city of Innsbruck. In 1472, he, with three other masters, he carried out an order for the manufacture of armor for the king of Naples. High appreciation of his work by Emperor Maximilian I was expressed in the fact that in addition to the usual pay for work, he received an honorary dress from him.

The Italian shtehtsoig was also intended for the spear tournament, called the "Romanesque". It differed from German in details. Firstly, his helmet was attached to the bib and back with screws. Moreover, on the front wall of the helmet there was a plate with holes - a clasp. Well, the helmet itself had a wide rectangular door on the right, a kind of window for ventilation. Secondly, the side of the cuirass on the right was convex, and not flat, that is, the cuirass had an asymmetric shape. Thirdly, in front it was covered with a thin Kamchatka canvas, on which heraldic emblems were embroidered. There was a tharch ring on the left side of the cuirass. On the right side, on the belt, was a leather cup covered with cloth, into which a spear was inserted before entering the lists. Moreover, it was much lighter than those copies that were used in the German tournament. For this reason, there was no rear arm for the spear shaft on the armor. 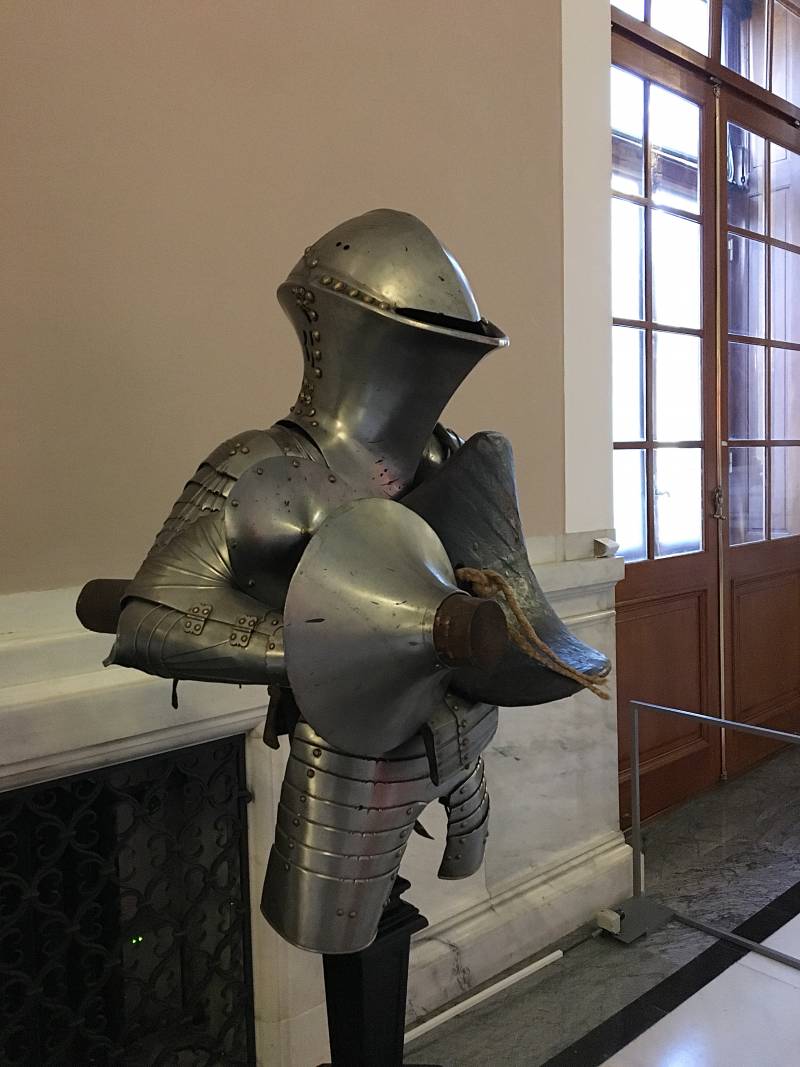 The axillary hollows of the stechtzuig often covered with convex discs.

The French shtehtsoig was almost identical to the Italian, but English, although it was called the steitzoig, had the most similarities with the combat and tournament armor of the XIV century than with the real German armor of the XV - XVI centuries. The reason was that in England the renewal of knightly tournament equipment was very slow.

PS The author and the site administration express their heartfelt gratitude to the curators of the chamber Ilse Jung and Florian Kugler for the opportunity to use the photographic materials of the Vienna Armory.