The project "Carmel". The armored future of the Israeli army

August 13 2019
122
Since 2017, Israeli defense enterprises and the military regularly talked about the progress of the promising Carmel project. It is part of the larger RAKIA program and is intended to work out fundamentally new ideas and solutions in the field of land armored vehicles. Until recently, only graphics were featured at exhibitions, and now the public has been shown three prototypes of new technology at once. 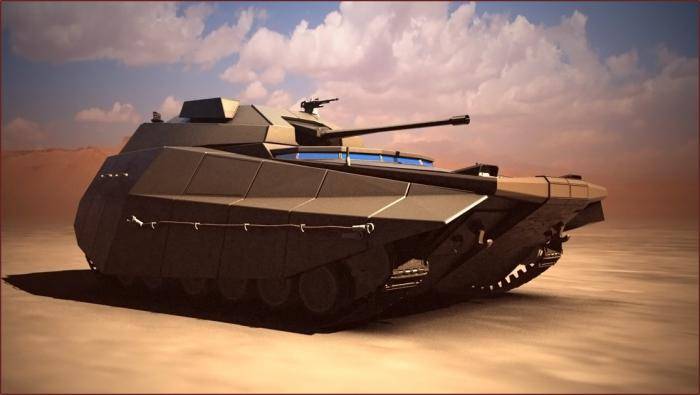 For the first time, the Carmel project (short for “prospective armored vehicle of the ground forces”) was told in May 2017. Then the representatives of the IDF disclosed their plans and also pointed out the basic requirements for the future vehicle. The main goal of the project is to create a promising armored fighting vehicle with a number of fundamentally new functions and capabilities. It was assumed the maximum use of automated systems and the introduction of new solutions.

The result of the project should be a light or medium-weight armored vehicle, suitable for use as a universal platform. In this case, the main goal so far is to create a combat version of such a machine with missile-cannon weapons.

The crew was proposed to be reduced to two people with the possibility of introducing a third. The latter can be a unit commander or an additional equipment operator. The customer requires to maximize the situational awareness of the crew at the expense of all available means. It was also necessary to reduce the burden on people by automatically solving most problems, including driving and guidance weapons. 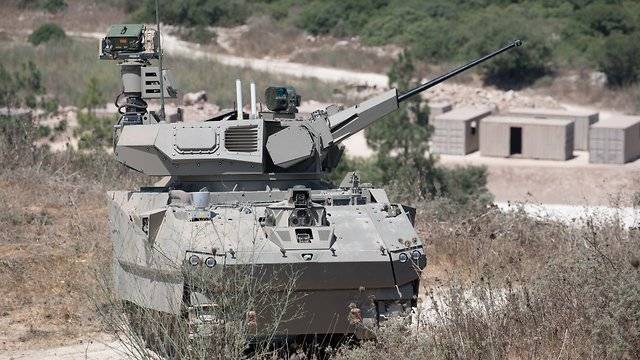 The RAKIA and Carmel projects envisage the work of various enterprises for several years. At the first stage of the program, it was planned to work out the general appearance of the equipment and its capabilities, as well as issues related to instrumentation equipment. At the same time, the creation of a caterpillar chassis of a new appearance is attributed to a further period.

All major Israeli defense industry enterprises, as well as several organizations from the Ministry of Defense, were involved in new projects. In recent years, they used to study the RAKIA / Carmel, and now they were able to present prototypes.

In early August, the first open demonstration of three prototypes of the Carmel machine from different developers took place at once. Prototypes were built by IAI, Rafael and Elbit. The event was attended by representatives of the IDF and foreign armed forces. It is expected that this will lead to the start of mutually beneficial international cooperation. 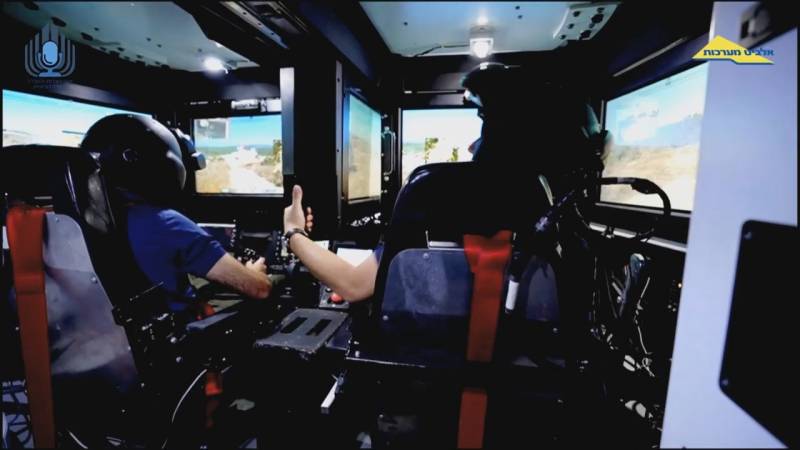 The interior of the office. In the center - a retractable console with a pair of monitors

The creation of the chassis for the Carmel product has not yet been completed, which is why the current prototypes are based on the modified M113 armored personnel carrier. All of them received new internal equipment of the hull, as well as combat modules with the necessary systems.

The Elbit prototype is based on a serial chassis that has undergone a major revision. The car of a characteristic form carries a lot of external devices, and is also equipped with a new remotely controlled combat module. Its armament consists of an 30-mm automatic gun and machine gun. The fire control system is integrated with communications and includes automated components.

The task of increasing situational awareness has been solved with the help of modern components. A retractable column with surveillance equipment is placed on the tower. The video signal and various additional information are displayed on the screens of the IronVision helmets. Such equipment allows observation in all directions “through the armor”. Measures have been taken to exchange data between surveillance, communications and fire control equipment. 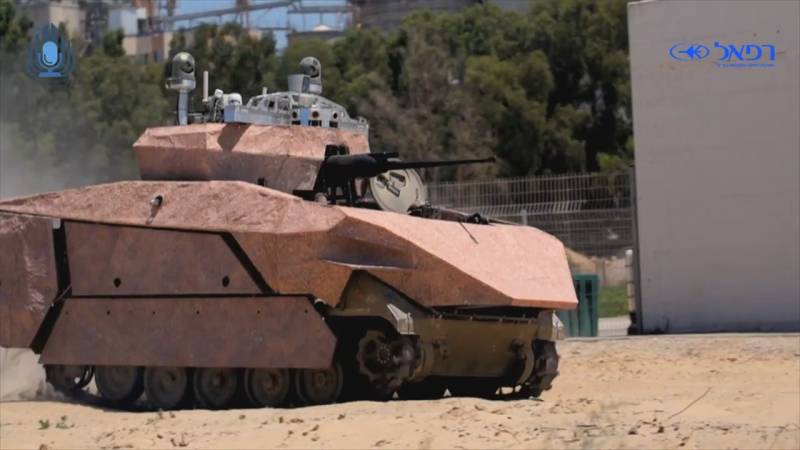 Experienced car from the company "Raphael"

The project from Rafael uses a turret with cannon-machine gun weapons and Spike missiles. Also, the combat module is equipped with advanced surveillance tools. Systems for a similar purpose are installed on the chassis. The control department has a panoramic assembly of several monitors. Dashboards based on LCD screens are also provided. Management is carried out using handles, keypads and touch screens.

Equally equipped is the habitable prototype compartment from the IAI. However, it has some differences in configuration and ergonomics. The most noticeable is the main governing body. The crew is invited to work with a controller such as a gamepad. For data output, a common panoramic screen and a couple of personal ones are used at each workplace.

With all this, the car from IAI differs from other models in the absence of weapons. On the roof of the base armored personnel carrier placed various surveillance equipment and other equipment, but there was no place for the combat module. 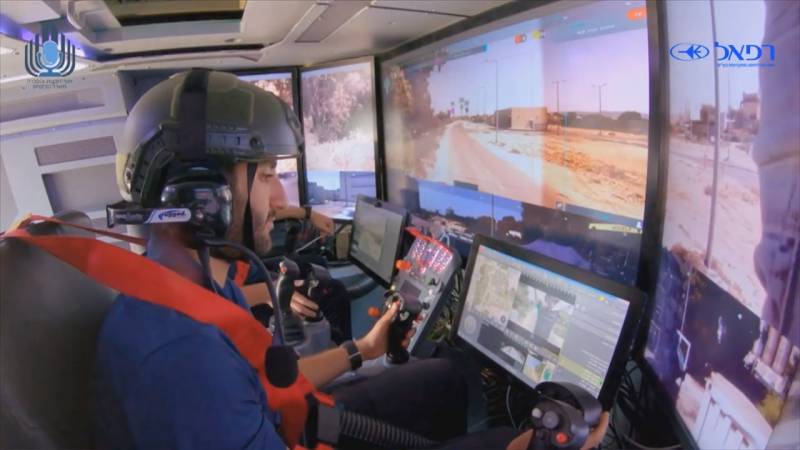 Jobs inside Carmel by Rafael

It is alleged that by the time of the first public demonstration, three variants of the Carmel machine had passed part of the tests. For a month, this equipment worked at the training ground and showed the capabilities of its equipment. In the near future, new tests of one kind or another will be conducted.

Over the next three months, IDF and project developers will conduct new tests of the presented armored vehicles. Then, the specialists of the Ministry of Defense will have to analyze the collected data and establish further ways for the development of the Carmel project. First of all, the fate of the project itself will be determined. In addition, it is necessary to study the prospects of its individual components in the context of the development of other military equipment.

The military must choose the final look of the future combat vehicle and draw up requirements for it. The final version of the Carmel project can be based on one of the current developments. It is also possible the formation of new requirements, offering a combination of different features of the three existing machines. Which of the scenarios will be accepted for implementation is unknown. 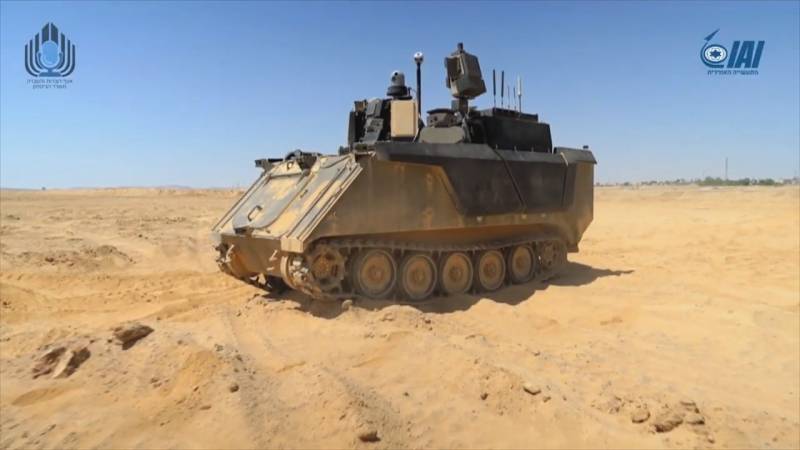 In the context of the RAKIA and Carmel projects, a number of new technologies are being developed. Different enterprises are working on a hybrid power plant, a new complex of active protection, advanced electronic systems, etc. Some of these developments were used in the construction of test samples, while others are not yet ready for implementation.

AOI plans to use new technologies not only in the Carmel project. Their application is envisaged for the modernization of various equipment in service. So, until 2022, an updated version will go into the series tank Merkava-4, which will use some of the technologies shown. However, it is not yet specified which particular developments will improve this machine.

The full result of the Carmel project is expected only in the distant future. While it is claimed that such armored vehicles will go into service no earlier than seven years later. Thus, the combatant part of the IDF will receive noticeable quantities of new technology only by the end of the next decade. In addition, by this time they will be able to master the modernized armored vehicles of the existing types. 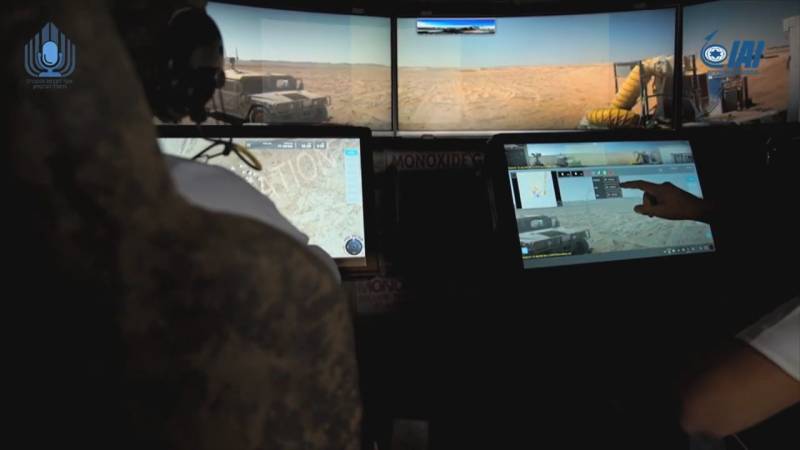 From the very beginning, the goal of the Carmel project has been called the creation of a multi-purpose unified platform suitable for the construction of equipment of different classes. At the same time, current prototypes cannot fully show the similar potential of the project.

The family may include a multi-purpose vehicle with missile-cannon weapons, an infantry fighting vehicle with an airborne compartment, carriers of various weapons and special equipment, engineering equipment, etc. All of them will be built on the basis of a single chassis, the development of which has not yet been completed. In addition, they will receive part of the main systems that are now being developed on prototypes.

It is expected that the unification of technology in chassis and electronic systems will provide a number of obvious advantages. The widespread use of advanced electronics will reduce the load on the crew while increasing efficiency, as well as simplify interaction with other vehicles and command. The Carmel family as a whole will have to become a universal and convenient tool for solving a wide range of combat and auxiliary tasks.

However, such results so far relate to the distant future. At the moment, only individual components and systems that are in need of testing and development are ready. For their development, further development of the finished project and all subsequent work on the new machine, it will take several years. The results of the current RAKIA / Carmel program can only be confidently discussed by the end of the twenties.

We are in Yandex Zen
The project "Merkava-4 Barak". New electronics in the old building
Constructive vulnerabilities of the main combat vehicle AOI "Merkava Mk.4"
122 comments
Information
Dear reader, to leave comments on the publication, you must to register.