August 12 2019
33
The phrase "Hungarian tank building" in itself causes a smile today. In fairness, it is worth noting that in the 1940s, not many European countries could afford to issue tanks. Despite all attempts, the Hungarian designers failed to create competitive combat vehicles, they always lagged behind the leading tank-building powers. The Hungarian tank Turan did not have a chance to catch the Soviet tanks in terms of security and firepower. 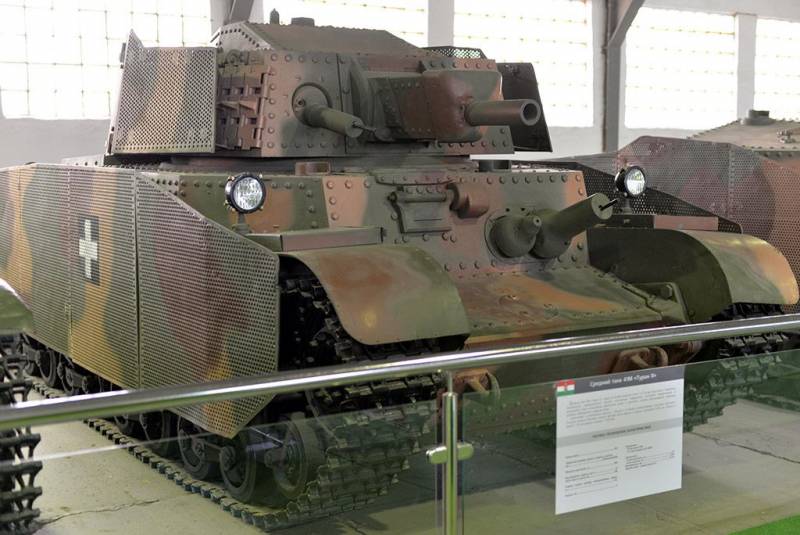 For all their shortcomings, the Turan tanks took an active part in the hostilities on the Eastern Front, and Hungary itself was one of the most faithful allies of Nazi Germany. Hungarian troops fought on the side of the Nazis almost until the end of the war in Europe. In total, during the serial production from 1942 to 1944, in Hungary, according to various estimates, up to 459 Turan tanks of various modifications were assembled. The last combat operation of World War II, in which the Turan tanks took part, were the battles at Lake Balaton in March-April of 1945. It was in this area that the last battle-worthy Hungarian tanks were lost, and part of the vehicles was captured by Soviet troops.

Despite the fact that the Hungarian troops took an active part in the battles on the Eastern Front, they did not gain any fame in these battles with the Soviet troops, and the Hungarians did not have noticeable successes in the battle with the Red Army soldiers. The Hungarian units were most actively used in the southern direction of the Eastern Front, and the main theater of operations for the Hungarian army became the steppes, which best revealed the capabilities of motorized and tank units. But with the armored vehicles the Magyar units had serious problems, Hungarian armored vehicles simply could not withstand the Soviet T-34 medium tanks and heavy HF. This is not surprising, given that история Hungarian tank building originates only in the late 1930-ies.

Prior to this, the Hungarian government tried to conclude contracts for the supply of armored vehicles with several countries at once. So, in Sweden, the Toldi light tank was ordered, the main weapon of which was the 20-mm anti-tank gun. The mass of these combat vehicles did not exceed 8,5 tons, and the reservation of the first series was 13 mm. The tank was created on the basis of the Swedish Landsverk L-60, one copy and a production license of which were acquired by Hungary. Naturally, the Hungarian military dreamed of getting more advanced tanks with better weapons and security at their disposal. But attempts to negotiate with Germany on the purchase of tanks Pz.Kpfw. III and Pz.Kpfw. IV ended in nothing. The same fate awaited negotiations with Italy to transfer a license for the production of medium tanks M13 / 40, negotiations dragged on until the summer of 1940, when the need for Italian vehicles simply disappeared. 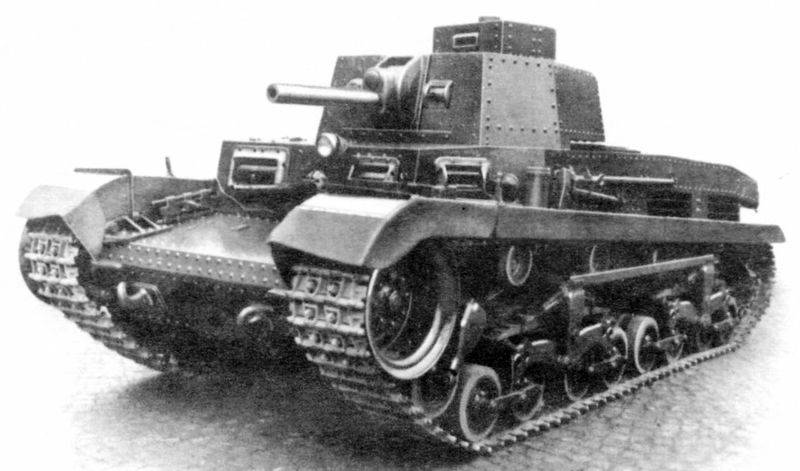 The prototype of the Czechoslovak tank T-21

Czechoslovakia became the savior of the Hungarian armored forces, which was completely occupied by the Nazi forces in March 1939. In the hands of Germany was a well-developed industry of the country, as well as numerous military developments, among which was the S-II-c or T-21 tank, developed by the designers of the Skoda company. The combat vehicle was developed on the basis of the successful Czech tank LT vz.35, which was widely used in parts of the Wehrmacht. The Germans were not interested in the T-21, so they were not against the transfer of finished prototypes to Hungary. In turn, Hungarian experts considered the tanks to be the best among all available samples of medium tanks for the country. At the same time, the Hungarians could not place an order for the production of tanks at the Skoda plants, since they were fully loaded with German orders.

The first prototype of the future Turan tank arrived in Hungary in early June 1940. After testing and passing the 800 km without breakdowns, the car was recommended for use in July of that year after making a number of improvements and improvements to the design. Important changes included: the appearance of a commander’s turret; increase of frontal reservation to 50 mm; and an increase in the crew of the tank to five people, with the deployment of three people in the tower. An example for the Hungarians when making changes to the design of the tank were the Germans, who were considered recognized authorities in tank building and the use of tank troops.

The version of the tank modernized by the Hungarians was adopted by the 28 on November 1940 of the year under the designation 40.M, and the tank received its own name “Turan”. The delays in the transfer of technical documentation and the deployment of mass production of tanks, which until the end of the 1930s in Hungary simply did not exist, led to the fact that the first production tanks “Turan” did not enter the tank school in the Hungarian city of Esztergom only in May 1942. 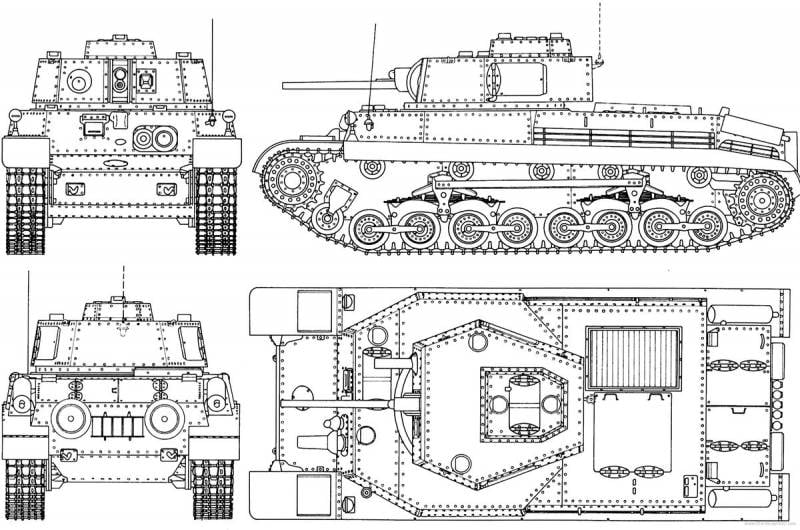 For its time, Turan was not at all the worst combat vehicle in the world. It is important to understand that the first prototype of the future Hungarian tank was presented by Czechoslovak engineers back in the winter of the 1937 of the year. The tank was originally developed for export, it was planned that the armies of Italy, Romania and Hungary would become its buyers. In May 1939, the tank changed its designation to T-21, and under this index a year later it ended up in Hungary. For the end of the 1930's, the combat capabilities of the Czech tank were still good. Reinforced frontal armor up to 30 mm (compared to LT vz.35) and the presence of an 47 mm Skoda A11 gun made the car quite formidable weapons on the battlefield.

The main problem was that the tank developed at the end of the 1930's was late for the war for which it was created. The Hungarian adaptation, although it received frontal armor reinforced up to 50-60 mm (all armored plates were mounted vertically or with insignificant angles of inclination) and the commander’s turret, was distinguished by the installation of the 40-mm semi-automatic gun of its own production 41.M, created on the basis of the German anti-tank gun PaK 35 / 36. Despite the good barrel length in the 51 caliber, the gun could not boast of large armor penetration. At a distance of 300 meters at an angle of encounter with armor of 30 degrees, the armor-piercing projectile of this gun pierced only 42 mm of armor, at a distance of one kilometer - 30 mm. The capabilities of the 40-mm gun were more than enough to deal with the light Soviet T-26 and BT-7 tanks, which formed the basis of the Red Army tank fleet in the 1941 year, but could not withstand the new Soviet tanks T-34 and KV Turan. 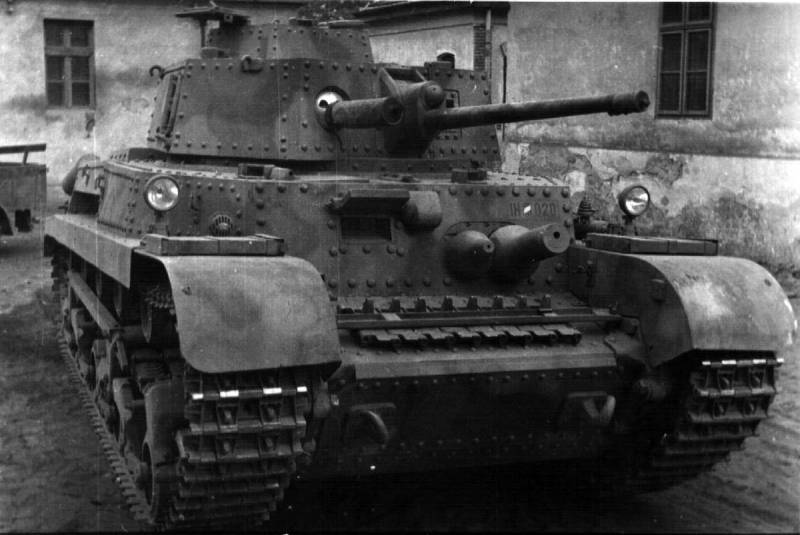 The problem was aggravated by the fact that the first serial Hungarian tanks began to roll off the assembly line only in the 1942 year, they did not have time to take part in the attack on Stalingrad and the Caucasus. But this also saved them from the subsequent catastrophe, in which the 2-I Hungarian army, which fought on the Eastern Front, according to various estimates, lost up to 150 thousands of personnel, up to 70 percent of its material and all heavy weapons.

Assessment of the capabilities of the Turan tank

The full-fledged combat debut of the Turan tanks lasted for two years, they took part in battles with Soviet troops only in April 1944 of the year. By that time, tanks that were late for the war tried to modernize. Already in the 1942 year, in parallel with the “Turan I” in Hungary, they decided to begin assembling the “Turan II” tank, the main difference of which was the presence of an 75-mm short-barreled gun with a barrel length of 25 calibers. The mass of this version of the Hungarian tank increased from 18,2 to 19,2 tons. At the same time, the remaining 8-cylinder gasoline engine with 265 horsepower. I accelerated the car to 43 km / h while driving on the highway, with the option with the 40-mm cannon the performance was slightly better - 47 km / h. The updated modification was designated 41.M Turan II.

The attempts of the Hungarian military to present the second life to the tank project from the end of the 1930's should be recognized as unsuccessful. But they were unsuccessful precisely because of the time the tank appeared on the battlefields. Even in 1940 and 1941, the car would have looked advantageous compared to light tanks with bulletproof armor, which formed the basis of the armored forces of the Red Army. But in 1944, the main opponents of the Turan were the T-34 and T-34-85 medium tanks, which the Hungarian tankers simply could not fight against. The 40-mm cannon did not penetrate the T-34 frontal armor from any distance, at least somehow it was possible to penetrate effectively only the lower part of the onboard armor plates of the “thirty-four”. The transition to a short-barreled 75-mm gun did not significantly change the situation. In fact, in 1944, the Hungarian counterpart of the German Pz.Kpfw tank entered the battlefield. IV, with which Germany began the war against the USSR. As an infantry support tank, the 41.M Turan II could be called a good machine, the 75-mm shell had a good high-explosive fragmentation, but it was a very difficult task to fight modern Soviet armored vehicles and Lend-Lease “Sherman” for a Hungarian tank. 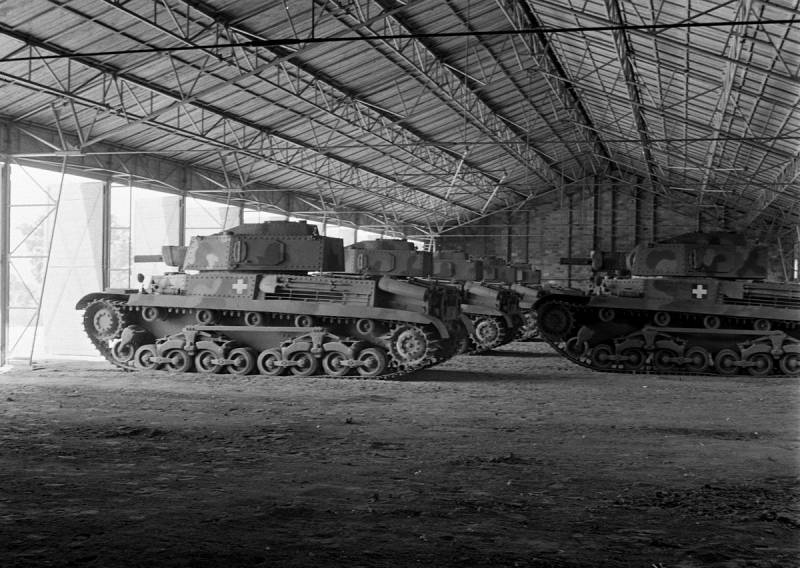 Bulletproof armor reservation in 50-60 mm frontal armor looked good at the beginning of the 1940's. This was enough to withstand most of the pre-war anti-tank guns up to and including 45 mm. In fact, the “Turans” were faced with the massive use by the Soviet troops of the 57-mm and 76-mm guns, which were guaranteed to penetrate their armor at a distance of up to 1000 meters, and the 85-mm gun of the updated “thirty-fours” left no chance for Hungarian tankers at all. The anti-cumulative screens that the Hungarians began to install on their armored vehicles in the 1944 year could not rectify the situation. At the same time, the outdated riveted design of the armor plate installation also did not increase the combat effectiveness and survivability of the vehicles. When the shell hit the armor, the rivets flew off and even if the armor was not broken, they could hit the equipment and crew of the combat vehicle. The triple tower with the commander’s turret did not save the situation, which allowed to relieve the commander, who was given the opportunity to lead the battle, without being distracted by other tasks.

A worthy answer to the Soviet T-34 tanks could be the third version of the modernization of the “Turan”, which received the designation 43.M Turan III. But this tank, armed with a long-barrel 75-mm cannon (barrel length of 43 caliber), with frontal armor reinforced up to 75-mm, was presented only by a couple of prototypes, it was never produced in series. In reality, when meeting with Soviet armored vehicles, which was presented in 1944 not only with the new T-34-85 and IS-2, but also with various self-propelled artillery, the Turan Hungarian tanks quickly moved from the category of combat vehicles to the category of scrap metal and fraternal graves for a crew of five.