F-22 Raptor over the Pacific

August 12 2019
70
American naval or air exercises, which are held in abundance around the world, including in the Pacific Ocean, are rarely interesting. But sometimes among them something really interesting is noted.


During the Talisman Saber 2019 exercises, which took place at the end of July 2019 in Australia in the Coral Sea, the KC-30A (modification of the Airbus A330 MRTT) of the Australian Air Force refueled the American F-22 aircraft in the air. According to the commander of the 13th aviation US Air Force Expeditionary Colonel Barley Baldwin, this was the first such refueling. 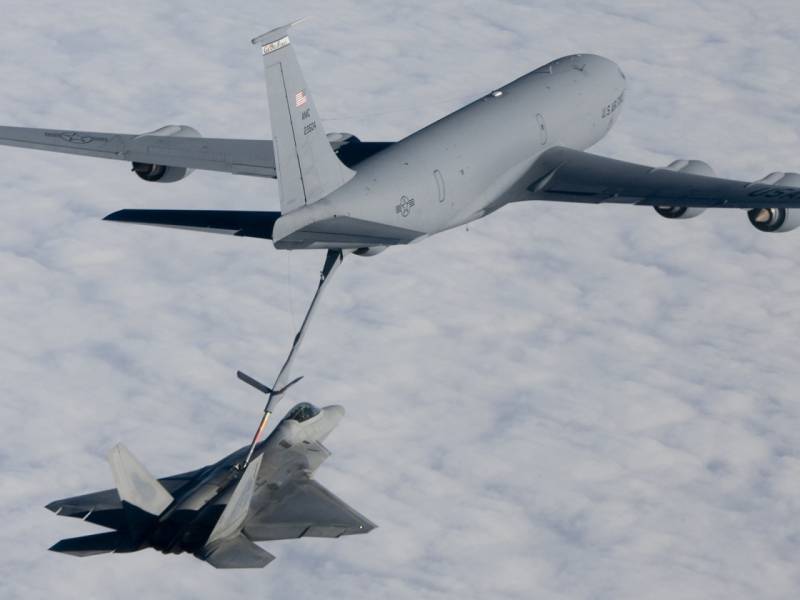 First question: why? Air refueling is usually carried out when distilling aircraft from the United States through the Pacific Ocean to air bases in Japan and South Korea. But here this option was clearly worked out, and the option of refueling during the combat use of the aircraft. Do Americans have few air bases that they would have to resort to refueling the F-22 in the air?

This incident attracted my attention with its inconsistency and strangeness. Gathering some other information and thinking about why the Americans would need such a thing, I came to the conclusion that we are talking about developing a new tactic for the battle for air superiority over a certain sea area.

Americans really do not have airbases everywhere. One such place is the South China Sea. In the likely military confrontation between the United States and China, this sea is one of the most important, since maritime communications pass along it, which is expedient for the Americans to cut off. This has been said for a long time, as far back as 2011, plans had been published for the naval blockade of China.

Easy to say - hard to do. The PLA will throw its aircraft and its fleet to break the blockade, which from year to year are becoming more numerous. In addition, China has nearby its coastal airbases and reinforced fixed on the Paracel Islands. The Americans have their closest airbase, Fotthama on Okinawa, located 1900 km from this area. This is outside the combat radius of the F-22. Of course, you can speculate that there are the Philippines, and they can provide airfields. Only this issue is still debatable, and it may happen that the Philippines does not want to help the United States, so as not to deal with China. At Clark's old U.S. airbase near Luzon, closed in 1991, a small air force has been based since 2016 in the year: 5 A-10 aircraft, three HH-60 helicopters, and about 200 personnel. This is only a patrol, and he cannot complete serious military tasks. In addition, to base a secret and very expensive F-22, which has high hopes, in the Philippines is too much risk. Already from here it follows that the F-22 can operate in the South China Sea, it must be refueled in the air somewhere in the region east of Taiwan.

The numerical superiority of Chinese aviation

There is another important factor. In recent years, China has significantly increased the number of its aircraft, and can now put up to 600 modern aircraft on the theater of the Yellow, East China and South China Seas. The Chinese also have a large network of air bases and airfields, which allow these air forces to maneuver and concentrate them in one place or another. For the Americans, the combat radius of aircraft based on existing air bases captures only the northern part of this region. 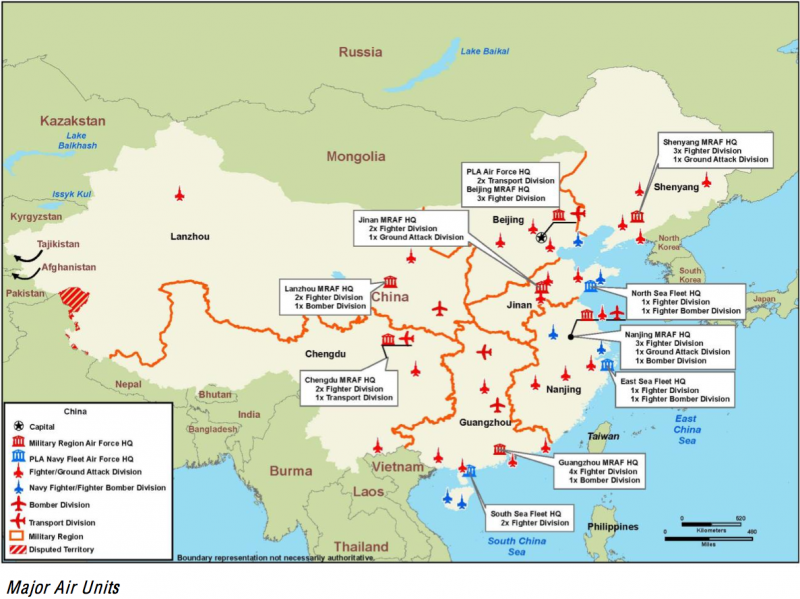 The USA has only about 400 modern aircraft now, and they can send only a part of them to the Pacific Ocean, probably 200-250, taking into account aircraft carriers. Already this gives almost three-fold numerical superiority of the PLA Air Force in the air, that is, there is a chance that Chinese aviation can defeat the American, seize air supremacy, and then it will be impossible to talk about any blockade of China.

In the USA, of course, they combed themselves. But since they can’t catch up with Chinese aviation by number, the idea arose to put on a qualitative superiority. US Air Force Pacific Commander Charles Brown said in April 2019 that by 2025 there would be more than 200 F-22 and F-35 aircraft, his own and his allies, in that region. 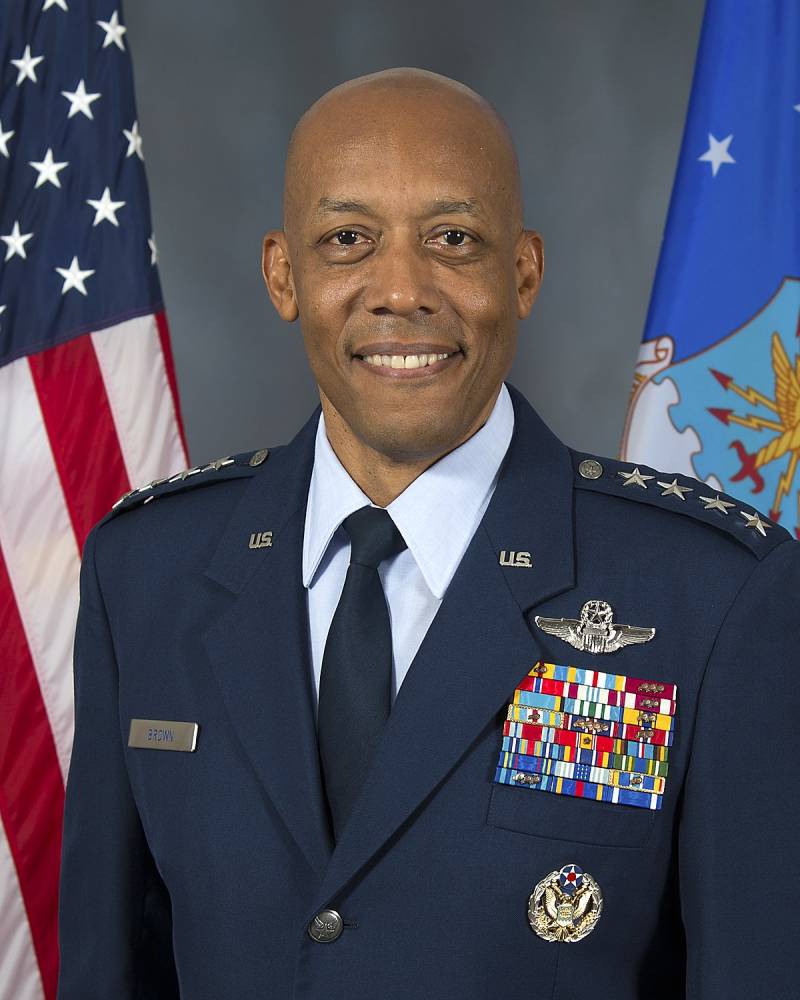 However, this idea was not as simple to implement as it initially seemed. There are too few airbases, and this entire aviation group not only could not operate in the South China Sea, but would also be crowded at several air bases, which would make it extremely vulnerable. Moreover, China began to practice missile attacks on air bases and aircraft carriers with medium-range missiles. Even the partial success of such a missile attack could dramatically shift the balance of power in favor of China and enable it to seize air supremacy.

A Negro with four generals stars and his subordinates put their brains on and put forward the option that we are discussing now.

In general, this is the tactic of ace Luftwaffe Erich Hartmann: "Hit - run." Hartmann scored his 352 victory in a very simple way. He did not climb into the landfill and turns, but chose a separate target, usually a weak pilot, who is clearly visible on the flight, dived at him from the sun, hit and immediately went to a height and to the side. The tactics are very effective and quite safe for the ace, however, its military expediency is also very doubtful. At the very least, it’s going to paint a striped plane.

The Americans took the same tactic with some modifications. The goal of Hartmann and General Brown with his pilots is to knock out the enemy (in this case, the PLA Air Force) with more of the best aircraft so that you can then finish off the remaining carrier-based aircraft. They have no choice, because a head-on battle in such unfavorable conditions can end in their defeat.

Their main calculation is made on the F-22 - AN / APG-77 radar, whose instrumental range is 593 km, and the detection range in stealth mode, that is, with the help of difficult to detect weak pulses, is 192 km. The latest AIM-120D missile has a launch range, according to reports, up to 180 km. That is, the F-22 pilot is given information about the presence of the enemy in a certain area, he must come up, radar in stealth mode, then attack with missiles and immediately leave. The last paragraph is all the salt of the new tactics. F-22 on a theater in the South China Sea should be suitable for an attack from the ocean and after the attack go to the same place where a tanker is waiting for it. Chinese planes, even if they find it, will not be able to pursue because of a limited supply of fuel, and the F-22 will fly to its air tanker, refuel and go to its air base. The ferry range exceeds 3000 km, which allows refueling far in the ocean, beyond the reach of Chinese interceptors. KC-30A can deliver 65 tons of fuel at a distance of 1800 km from the base, with the possibility of returning to the base. A refueling aircraft can refuel X-NUMX F-8 aircraft. In addition, KS-22A can take fuel in the air from another tanker, that is, it is fundamentally possible to transfer fuel from plane to plane through the aircraft, thereby ensuring either the actions of aircraft at a distance of several thousand kilometers from the air base, or ensuring their long-term presence in the air . 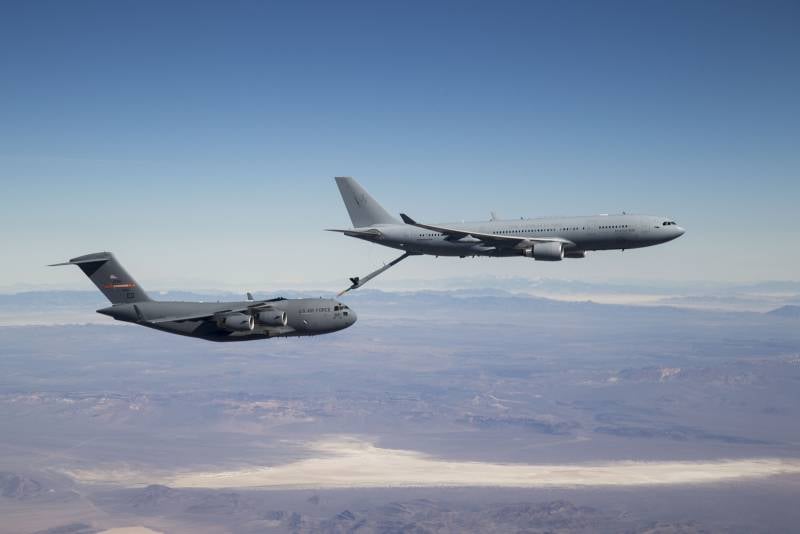 By the way, here are the capabilities of this aircraft. Australian Air Force KC-30A refueling US Air Force Globemaster

This circumstance allows the F-22 to operate from air bases in eastern Japan and from Australia, as well as, if really needed, from Alaska and Pearl Harbor (8,5 and 9,4, respectively, thousands of kilometers to the South China Sea). Let's not forget that in the USA there is an S-3 carrier-based aircraft with a modification of a tanker that can refuel one F-22 in the air. That is, refueling is possible not only from coastal air bases, but also from aircraft carriers in the open ocean.

In my opinion, the idea is quite original and feasible. Of course, one can hardly expect that with such bites from afar, Americans will be able to cope with all of the latest Chinese aircraft. For any tactic, you can develop a counter-tactic, both nullifying the enemy’s efforts, and leading him into a trap, under attack.

But all the same, the Americans get one significant advantage from this: the very ability to conduct battles in the air at very remote theater stages. Even if the Chinese make a missile attack at their nearby air bases in Japan and South Korea, they will still have the opportunity to use airplanes over the waters of the South China Sea.