"Wild" 1918. The most disordered year of the Civil War

August 11 2019
214
World wars, waged, as a rule, by large states, begin at the peak of the form of their armed forces. Then they are replenished by inexperienced mobilized, lowering the overall level. Military products are becoming closer to the concept of ersatz. Food is getting worse. And the conflict, which began under the beat of the drums and the brilliance of the bayonets polished to the sparkle, smoothly passes into the “war of the disabled”. The appearance of the fighting armies is far from the first, enthusiastic days. At the same time, efficiency, which is interesting, is increasing: the reason for this is the transfer of production to military rails and gained invaluable experience. 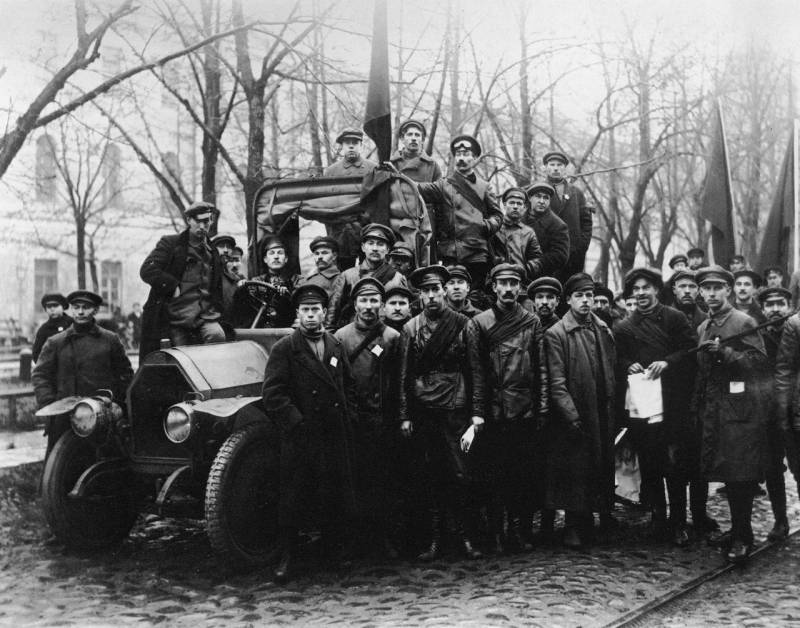 Civil wars very often look exactly the opposite: they begin after a long period of internal instability, or even after that same world war. Therefore, the “battle of the disabled” takes place, in contrast, at the beginning, and only then do the parties get the specific experience of the civil war, organize the rear, and discipline.

The civil war in Russia took place precisely in this scenario. And her first full year, 1918, turned out to be the peak of weakness and disorganization for both sides.

The Reds “on paper” had a lot of strength. But everywhere had their own characteristics.

The country was revolutionized by a series of deep social problems and a difficult war. Free from the majority of conventions and restrictions of the collapsed state, the masses raged, solving local problems in the good old way. In America, he would be called the Lynch Court.

The Bolsheviks who came to power on this wave were not very happy about this. The doctrine of this relatively small and disciplined party, in contrast to the theorizing of anarchists, suggested building a socialist society "from above." Of course, not from the "bourgeois" state, but by the hands of a certain analogue of the Order of the Templars, a party that sincerely believes in its mission, in which the Bolsheviks, of course, saw themselves.

To do this, it was first necessary to put things in order. But there were serious problems with this in a country in chaos.

The Red Army was born in February 1918 year. But in reality, the forces of the Reds for a long time remained not a single army, but a combination of disparate detachments. Often they were completely different politically - the soldiers "professed" that version of leftist beliefs that was close to their field commander. This was aggravated by the low political literacy of the latter - many of the “leaders” in fact could not even answer to themselves which platform they adhere to. The result was a mess, which concealed enormous potential for misunderstandings, quarrels and direct clashes between seemingly friendly parts of each other. 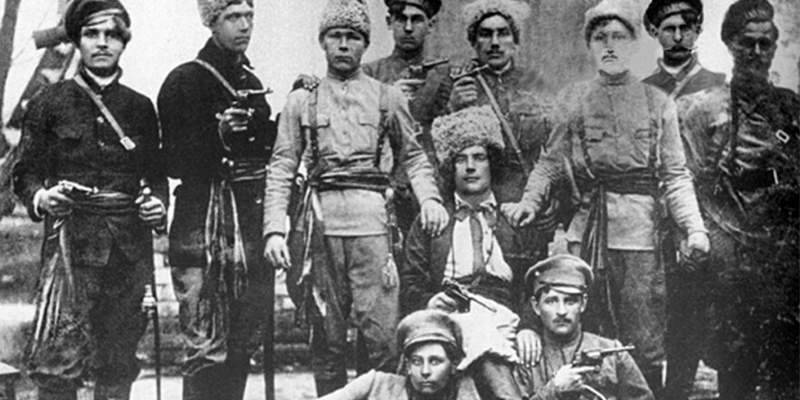 Therefore, the real Wild West often reigned in the frontline zone: the one who had people and weapons dictated the will. In case of refusal to execute it conditionally, the “red” detachment could take and shoot the local authorities - the “red” council. There were many such cases, but rarely came to a real trial in Moscow.


The case of Marousi Nikiforova was one of those rare situations when the trial nevertheless “got it.” What was the result?

Maroussia herself was a typical bright personality of her time. An anarchist with experience who sincerely hates the current system and the rich. According to some reports, she organized several attacks before the revolution. I went to prison, rushed to the race and emigrated. But February returned her to Russia, where Maroussia quickly found herself in the role of ataman of the anarchist military detachment. At its peak, there were 1000 people with machine guns, guns and armored vehicles.

There, where the Marusi detachment entered, there was only one power - its. The matter, as a rule, resulted in a robbery - not even because the anarchist strove for profit, but because the detachment somehow had to be supplied. And getting in the way of the furies was not recommended. For example, Maroussia shot the head of the Elisavetgrad military registration and enlistment office, a completely “red” man.

There were many similar precedents on her part, and the case ended in a lawsuit in Moscow. The Bolsheviks, who were always striving to restore order, were determined to make an illustrative example of Marousi - every “field chieftain” could be punished. 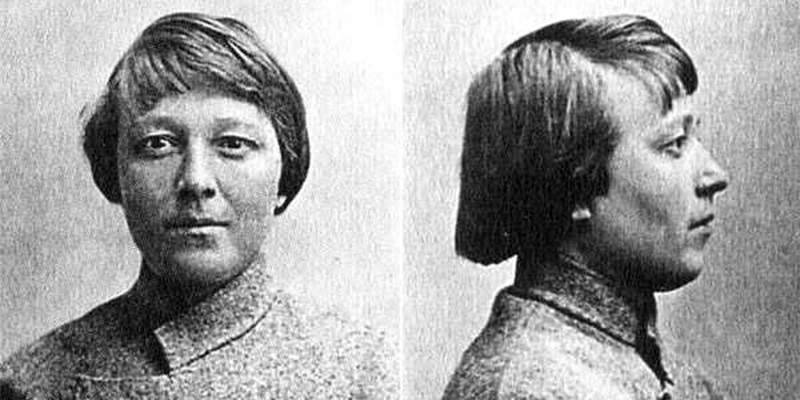 But the time for this has not yet come. Marusya made many friends even among influential Bolsheviks (for example, Antonov-Ovseenko, who joined the party only in 1917), not to mention the anarchists. Many witnesses managed to die in the fields of Civil, others actively fought and could not come. The court fell apart - only a few of the Marusins' "arts" managed to prove, and the verdict was limited to a six-month ban on holding leadership positions.

Perhaps our heroine would have got it right after the Civil War. But in the 1919 year, she independently outstripped the possible actions of the KGB, setting off to blow up Denikin’s headquarters at the head of a small detachment of saboteurs. But along the way, Maroussia fell into the hands of Slashevskaya counterintelligence, and was ultimately hanged by whites in September 1919.

White has its own problems

White in the first year of the war was also weak, but in his own way. The events of the 1917 year finally decomposed the army, but a significant part of the officers still had a corporate sense. It inevitably placed her at the forefront of the anti-Bolshevik forces. The desire for unity of command, order, and more traditional than proposed by the Reds statehood, only strengthened their impulse.

Across the country, there were many categories of the population that could become natural allies for the white officers. From part of the Cossacks to the bourgeoisie, wealthy peasants and the old bureaucracy. But whites were let down by their officer education. A good military man must distance himself from politics, and, as a rule, does not know the art of agitation.

White put forward the most legitimate, as it seemed, slogan: to restore the Constituent Assembly dispersed by the Bolsheviks. They defiantly did not take on the role of arbiters of the country's fate, offering first to win the war, restore order, and then give the Russians the opportunity to choose independently what kind of government they want. But such a respectful, it would seem, position in practice turned into a complete failure.

To win the Civil War, it was necessary to achieve at least the tacit consent of the majority of the population and mobilize their active supporters. The white formula “we leave everything to the Constituent Assembly” did not help to do either one or the other. The peasants, for example, were worried about the land issue - they had already managed to cut it themselves in an explicit order during the “black redistribution”. And White's hypothetical victory left a chance that the land would be taken back.

The ice campaign was an example of valor and self-sacrifice; its phenomenon to a large extent soldered the Volunteer Army. But its strategic results were deplorable

Other categories of the population that could help the whites were divided. Cossacks thought first of themselves about themselves (and the poor part of the Cossacks even sympathized with the Reds), the "bourgeoisie" in words supported the anti-Bolshevik forces, but were in no hurry to allocate serious money. The rest did prefer, for the most part, to sit quietly, not being sure of anyone's specific victory.

Perhaps to unite potential allies and push them to action could be a less vague program that gives people an idea of ​​what they risk. But there was no such program, and when it appeared, it was too late.

The result was not slow to affect the battlefield. The “officer” white armies of the beginning of the Civil War consisted of well-trained and motivated fighters, but they were few and disgustingly supplied. Interaction with allies and loyal groups was poor. The result was tactically successful actions on the verge of professionalism and heroism, but the practical “exhaust” was equal to zero — here they smashed someone, then scattered the enemies, marched through an unfriendly region, but in the end they achieved little. And when they did, it was too late.

On the eve of great things

1918 year passed in a state of least predictability. Each of the parties had a number of imbalancing shortcomings. How they play, what kind of movement will lead to what, who will crash and for what reason, then it was unknown to anyone.

Each side, on the whole, was aware of these shortcomings and tried to correct them: the Reds sought to restore order, and the White sought to activate and unite their mobilization base. The methods, as well as the results, were different. Success meant gaining vital sustainability and ultimately victory in the Civil War. And although it was still a long way to summing up the results, the prerequisites for them were formed at the end of the 1918 year - the year for both sides of the most amateurish (albeit in different ways), unstable and most disordered.