August 10 2019
63
The motorcycle M-72, which was mass-produced and mass-produced in the Soviet Union from 1941 to 1960 a year, is rightly and deservedly the main worker of the Great Patriotic War among motorcycles. The motorcycle was originally created for the needs of the army, so for a long time it was unavailable in civilian sale. Moreover, already during the years of the Great Patriotic War in the USSR, attempts were made to create a more powerful motorcycle, including a wheelchair-driven drive, like the German counterparts. One of the motorcycles created in Tyumen during the war years was the all-wheel drive TMZ-53, which was released in the amount of two prototypes. 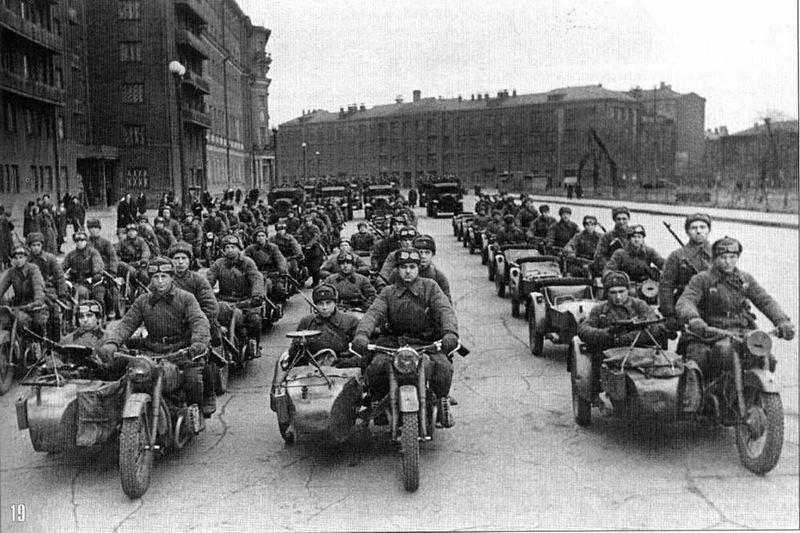 M-72 motorcycles go to the front

A distinctive feature of the motorcycle was a wheelchair drive. The Germans spied on this feature, and decided to implement it on new Soviet motorcycles. In the conditions of domestic off-road all-wheel drive was not an unnecessary solution. Unfortunately, TMZ-53, despite the prospects of development, turned out to be very difficult to manufacture, it was not possible to master its production in wartime conditions, and the motorcycle never went into mass production. It is all the more surprising that of the two prototypes released to this day, at least one has survived, which today can be seen in the collection of the Polytechnic Museum in Moscow.

The situation with the production of motorcycles in the USSR

By the time the Great Patriotic War began, the motorcycle fleet in the Soviet Union remained small, only four 7 motorcycle models were mass-produced at four motorcycle plants: Izhevsk produced Iz-7, 8 and 9, in Leningrad L-300 and L-8, in Podolsk PM -750, in Taganrog TIZ-AM-600. Moreover, all of these motorcycles were civilian models, they were not adapted for the war. By their power and operational indicators, as well as throughput, the listed models did not meet the requirements of the Red Army and were not very suitable for manning motorcycle parts.

Moreover, until the 1932 year of serial production of motorcycles in the USSR, it simply simply did not exist, and in all from 1932 to 1941, about 60 thousand motorcycles were produced in the Soviet Union. The most popular production models were IZH-7, IZH-8, IZH-9 and L-300 motorcycles, which were copies of the German DKW motorcycle model "Luxus 300" of the late 1920's. At the same time, the only motorcycle with a sidecar was AM-600, which was produced at the Taganrog Tool Plant (TIZ). This model was equipped with a four-stroke engine with a power of only 16 hp. Another motorcycle with a sidecar PMZ-A-750 was stopped being produced in Podolsk before the start of the war in 1939. Thus, in the pre-war USSR, army models of motorcycles were virtually absent; the Soviet Union was forced to meet the invasion of 22 on June 1941 with the existing fleet of motor vehicles. 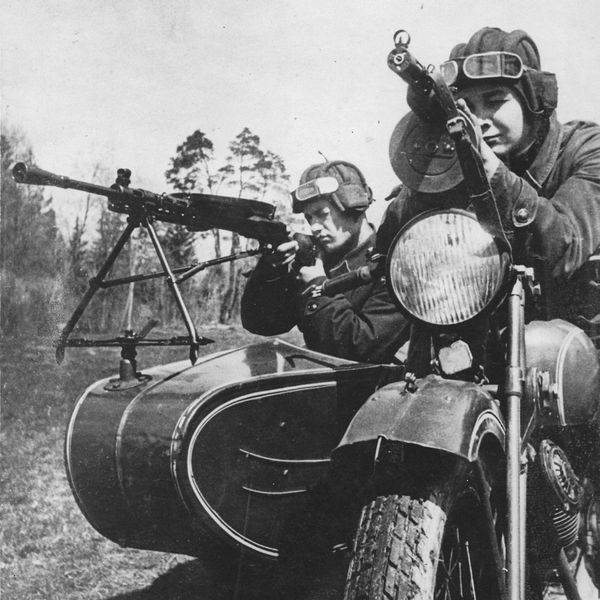 Fighters of the Red Army on a motorcycle TIZ AM-600

The third five-year plan (1938-1942 years), when it was planned to get to the mark of 11 of thousands of motorcycles produced per year, was to be hit in terms of the production of motorcycles for the country's factories. At the same time, Izhevsk IZH-9, which received a new 4-stroke engine, was to become the flagship model. The motorcycle was useful for communications and reconnaissance, but it was still not suitable for the role of the main army model, since it was not originally designed for the installation of a stroller.

At the same time, at the beginning of 1940, a decision was made to create motorcycle parts, the states, the composition of weapons and equipment of which were developed by the Main Armored Directorate of the Red Army. Then, in the first half of the year, 15 motorcycles of various classes were tested, which were designed to identify the most reliable and hardy model. The trials were won by the German motorcycle BMW R71, which by that time was already in service with the Wehrmacht and successfully established itself during military campaigns. Especially for testing and further copying, five BMW R71 motorcycles were anonymously purchased in Sweden. The role was also played by the fact that the specialized design bureau for heavy motorcycle construction, created on the basis of the Iskra Moscow experimental plant, was headed by N.P. Serdyukov, who had an internship at the BMW factory from 1935 to 1940 for a year. In the Soviet Union, a copy of a German motorcycle was designated M-72 and under that name the car went into series, becoming the main Soviet army motorcycle during the Great Patriotic War.

At the same time, by the beginning of the war it was not possible to launch a new model in a series. Only two months after the start of the Great Patriotic War, the Moscow and Kharkov motorcycle plants managed to establish the production of the M-72 motorcycle, while the release did not satisfy the needs of the Red Army, and the catastrophic situation at the front, which required the evacuation of enterprises, did not improve the pace of production. So the head Moscow plant for the production of M-72 in November 1941 of the year was hastily evacuated to Irbit, until that time they had managed to produce all 2412 M-72 motorcycles at MMZ. The situation was complicated by the fact that the cooperation between the enterprises for the production of a new motorcycle model that had developed before the war was seriously violated. 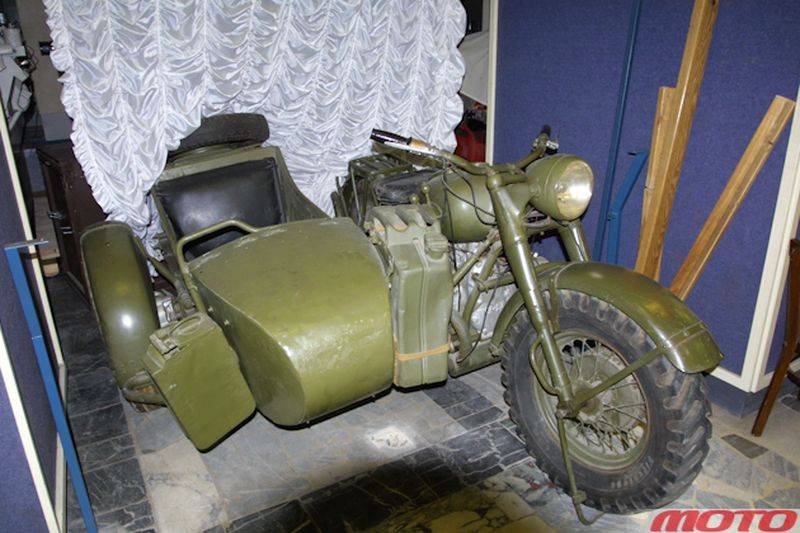 TMZ-53 at the Polytechnic Museum

At the end of November 1941, the evacuated Taganrog Tool Plant arrived in Tyumen, located on the territory of the Tyumen brewery. For the entire 1942 year, the company, which experienced personnel shortages and a lack of machinery, was able to transfer only 187 AM-600 motorcycles to the military. They could not establish the serial production of M-72 in Tyumen at the new Tyumen Motor Plant (TMZ). Despite this, it was in Tyumen that an attempt was made to create a domestic all-wheel drive motorcycle. The TMZ-53 model, developed by the plant’s specialists in the 1942 year, has become a bright page in stories enterprises. The motorcycle itself was a response to numerous German counterparts with wheel-drive, which Soviet troops encountered at the front.

An experimental heavy-duty off-road motorcycle was developed in Tyumen under the guidance of designer Y. V. Kagan. The car could be called an all-terrain motorcycle. Judging by the surviving sample, in addition to the drive on the wheel of the stroller, the TMZ-53 also received large-diameter wheels with a developed off-road tread. The new motorcycle was maximally unified with the M-72 model, which seemed to be a logical and correct decision. Like its predecessor, it was equipped with a boxer engine. Opposed arrangement of cylinders (opposite each other) provided the motorcycle with a low center of gravity and excellent cooling of the engine by oncoming air flows. Like the M-72, the new model easily transported three fighters with small arms, and thanks to the presence of all-wheel drive, patency on all types of roads only increased. 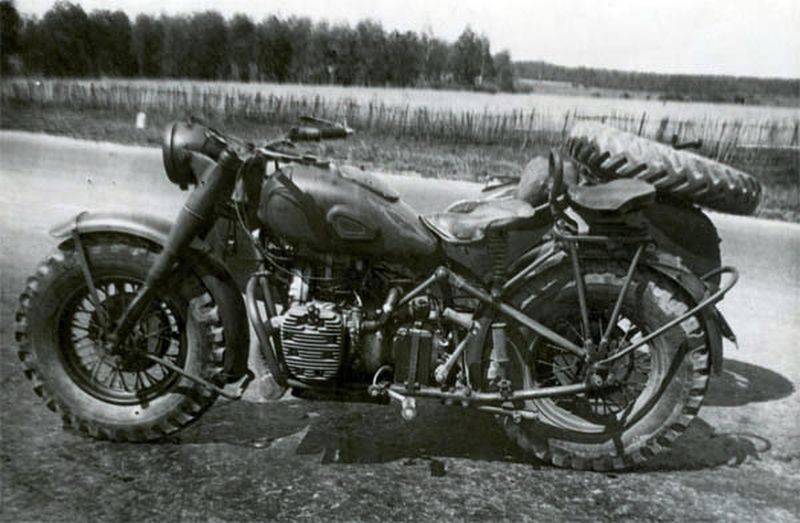 At the same time, the two-cylinder four-stroke opposed air-cooled engine was boosted, its volume increased to 1000 cubic centimeters (M-72 746 “cubes”), and engine power increased to 28 hp at a crankshaft speed of 4800 rpm This engine was enough to provide the TMZ-53 with a maximum speed of 90 km / h.

The main distinguishing feature of the motorcycle was the drive to the wheel of the stroller (the wheel was sprung). Also in the transmission of the new motorcycle, in addition to the 4-speed gearbox and cardan drive, a reverse gear and a multiplier appeared. The differential of the rear axle on the novelty from Tyumen could be blocked. The TMZ-53 all-wheel drive motorcycle ignition system housed a two-spark magneto. The wheels of the new motorcycle had a dimension of 6x16 inches, which provided the motorcycle with good ground clearance - 180 mm.

The new all-wheel drive motorcycle TMZ-53 was tested together with German motorcycles BMW R-75 and Zundapp KS-750, there were enough such trophies in the Red Army. The tests took place in summer and winter, including in difficult road conditions. In terms of dynamics, these motorcycles were equivalent, and on the roads, the model designed in Tyumen showed even better results, especially at elevations of more than 26 degrees. Lost TMZ-53 only the famous "Tsundapu" - in terms of efficiency and power reserve, a smaller gas tank was installed on the model. The tests showed that the all-wheel drive motorcycle TMZ-53 could be used to tow the 45-mm gun, and in some conditions it could even pull the 76-mm artillery system. 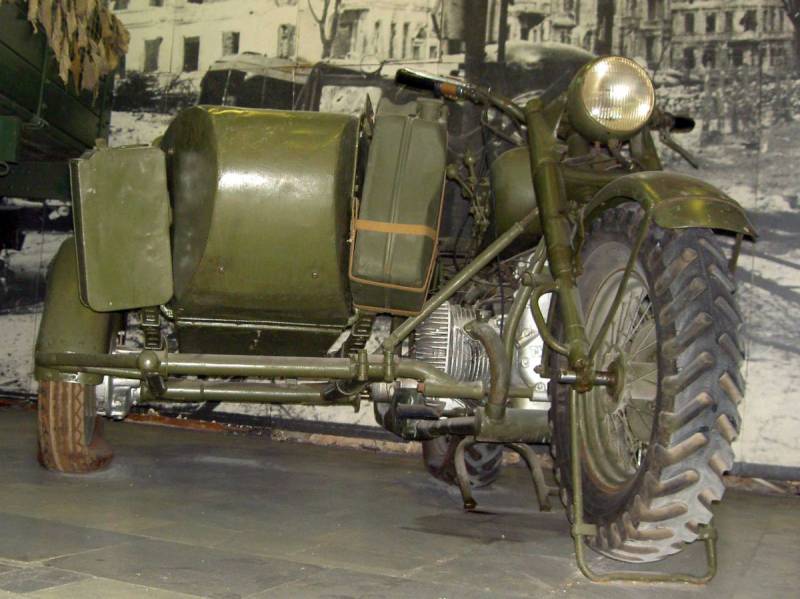 TMZ-53 at the Polytechnic Museum

Specially for the new motorcycle, a variant of the stroller was developed with the possibility of installing an 7,62-mm DS-39 machine gun. Also, designers presented a variant with a flamethrower - a flamethrower stroller (OM). These developments were waiting for the same fate as the TMZ-53 motorcycle itself, which, despite good test results, did not go into mass production. To establish its production in Tyumen, where they could not cope with the production of M-72, would be problematic, and to start production at other plants that could not cope with the plans for the production of M-72 was also not the best solution in war conditions. In addition, at the beginning of 1944, the plant was forced to relocate again, now to Gorky. Another attempt to create an all-wheel drive motorcycle during the war was the M-73 model, the first tests of which took place in the 1944 year. This model also did not go into series. According to the commission, the increase in complexity and cost of production made the new motorcycle unprofitable, and the all-wheel drive motorcycle had no serious advantages over the serial M-72.