The end of the special project "Navalny"

August 9 2019
445
The Investigative Committee initiated a case of laundering 1 billion rubles by the “Anti-Corruption Fund” by Alexei Navalny, our main “anti-corruption” and pro-American opposition. Apparently, the investigation will go to Western sources of Navalny financing on a large scale, this is serious, and this is the first time. 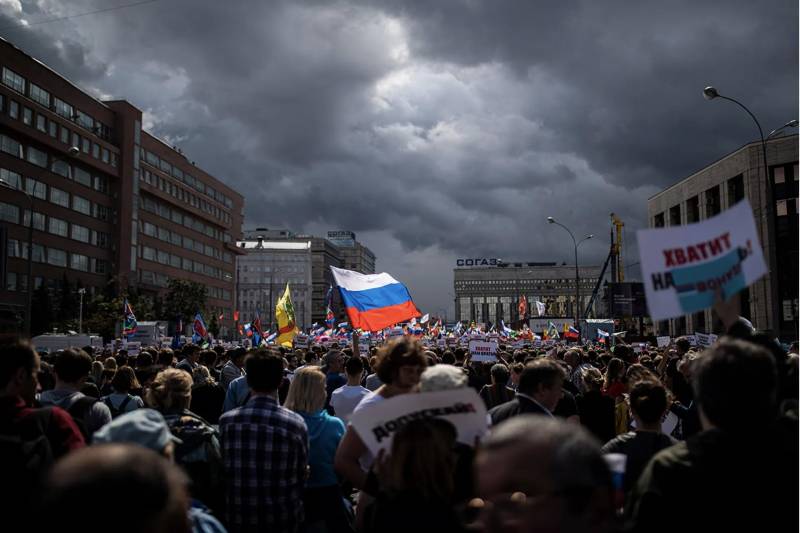 Look for money, not "activists"

For the first time, the investigation affected the financial sphere in the activities of FBK in order to enter the US intervention in the Russian elections? To get direct financing by the West of the protest actions of the Russian “radical opposition”? It seems that Moscow intends to mirror the accusations of Russia of interfering in the elections in the United States and the West as a whole.

"Echo" and "Rain" talk about the harsh detentions of "opposition" in protests, they do not know how in the city of Paris they detain "yellow vests". But in a certain sense, one can speak of the harshness of power, which had not existed before, in relation to the organizers and activists of the “protest”: the former indulgence towards them as pro-Western sympathizers disappears. Because the policy of Russia towards the USA and Europe is changing.

We are smart and understand that no “protest leader” just gets into the Western TV, and our protesters “screw” for the sake of the picture on this TV. Until recently, Moscow tolerated this as an unpleasant, but not dangerous activity of the Western special services for the sake of some of our "highest interests" in the international arena.

In fact, Alexey Navalny is a Western special project, he once headed our "fifth column" under the roof of grants from Western NGOs and NGOs. “Navalny” is the same special operation of the USA as “Saakashvili”, “Yushchenko”, “Guaido” and so on, ending with “Zelensky”. All of them, except the last, studied at the same advanced training courses of “young leaders” in America, and what different fates!

Navalny and his “foundation” were allowed to live while it was politically interesting to the Kremlin. In the jargon of special services, Navalny is used by our authorities as a "goat provocateur." Because it is convenient: it has long and well discredited itself, so why change it? Instead, they can find a more intelligent one. In the city of Washington, they understand this, but they can’t find another “goat”, and the Kremlin is slipping them an old trusted one. It is possible that he is already a double agent, works on all sides.

The excitement of the SC “case of billion” by FBK suggests that they are now preparing to use Navalny as evidence of Western interference in our elections. And the point is not the threat of Maidan in Moscow, as some very independent observers try to escalate passions.

In general, Maidan is impossible in Russia, several articles have already been written on this subject, but we repeat: the United States made a strategic mistake by organizing a maidan coup in Kiev in front of not only the Kremlin, Moscow, but also the whole of Russia. In the US, this is understood, ex-Secretary of State Henry Kissinger hinted at this in one of his interviews.

A stronger strategy would be to bet the United States immediately on a coup in Moscow, but after the failure of the white-collar workers in the 2012 year, they abandoned it, concentrating on the Maidan Bandera coup in Kiev at the end of the 2013 - the beginning of the 2014 year. They counted on the “domino” effect, on the fact that the Kiev coup would increase pressure on Moscow. It turned out what happened: the West "took" Ukraine with the help of Bandera, like Hitler in the 1941 year, and Russia created outposts in the Crimea and the Donbass and received a vaccine from the Maidan.

Then came the “Minsk truce”, Moscow hoped to come to an agreement, with the help of the Minsk agreements, return the situation in Ukraine to the state before the coup d'etat, but to no avail. Today, Moscow refuses this “Minsk policy”, this is evidenced by the granting of Russian citizenship to the residents of Donbass, as well as the possibility of obtaining a residence permit in Russia for all citizens of Ukraine, wherever they live. At the same time, Russia's economic sanctions are tightening. In other words, Moscow ceases to support the nationalist state of Ukraine, the Minsk agreements are declared dead, although this is not officially stated. The only benefit of Minsk for Russia is that it was more or less easy to complete the import substitution and rearmament program of the RF Armed Forces.

The Big Game, a new stage

More importantly, the “Minsk policy” of Moscow failed not only in Ukraine, but also in relation to the United States and the West as a whole. In response, Moscow received fantastic accusations of the Skripals case, the Malaysian Boeing, and even Trump’s conspiracy with Putin, anti-Russian sanctions, and blackmailing the United States from the INF Treaty. After all this, Russia has nothing to expect from the United States: Trump is not eternal, the "democrats" of Biden - Clinton and Congress today successfully chew it. But if there’s nothing more to come to an agreement with Washington, there’s no point in enduring further the Western special project “Navalny” and turning a blind eye to its financing by the West.

The wheel of the “big game” has turned and Moscow’s policy towards the United States is changing: Putin officially announced that Russia “will no longer come forward with political initiatives.” Trump America is undemocratic, so our Democrats are no longer needed either. And the Investigative Committee has seen a criminal billion rubles in the accounts of FBK "anti-corruption" Navalny. Under the slogan “For Fair Elections”, they will close him as an accomplice in the interference of the Western special services in the Russian elections, which received funding from abroad for their shares.

And about democracy, "the power of the people"

In simple terms, Western "democracy" is the democrats' divorce of suckers wholesale and retail under the leadership of the American ambassador. Even in Germany, the US ambassador is teaching "democracy" to the natives there. This is also a well-paid job for functionary democrats.

In America itself, there is no “democracy"; it is an export product. The United States has a two-nimble power plutocratic system due to the absence of the US ambassador in Washington, and also because the Russian and Chinese ambassadors do not assume democratic functions.

American analyst Paul Craig Roberts once wrote:
“Russia is waiting for Putin to stand up for the country, stop treating Western countries as partners, when it is obvious that the West is the enemy of Russia. The West is financing traitors who work tirelessly to undermine Russia with Western money. ”

This time is coming, says the Investigative Committee as a consequence of laundering 1 billion rubles of FBK Navalny: they begin to treat traitors as traitors, and as enemies as enemies.