August 11 2019
230
Cinema. I deliberately put off a review of the odious series Chernobyl. Indeed, since the time has passed since the premiere, it has only become clearer that this propaganda creation is capable of existing in an artificially created conjuncture. Only in it, in the stream of laudatory speeches of the liberals, who, in the best traditions of Goebbels, a thousand times repeated the lie that became true, the series "Chernobyl" in general can become something worthy of attention. But the further we move away from the fashionable Chernobyl theme, the more the flow of accusations against Russia increases, the more often activists scratch the helmets of the riot police, and the next Internet garbage dump publishes an “investigation” about our native Mordor, the duller the halo of “glory” of the Chernobyl painting ". 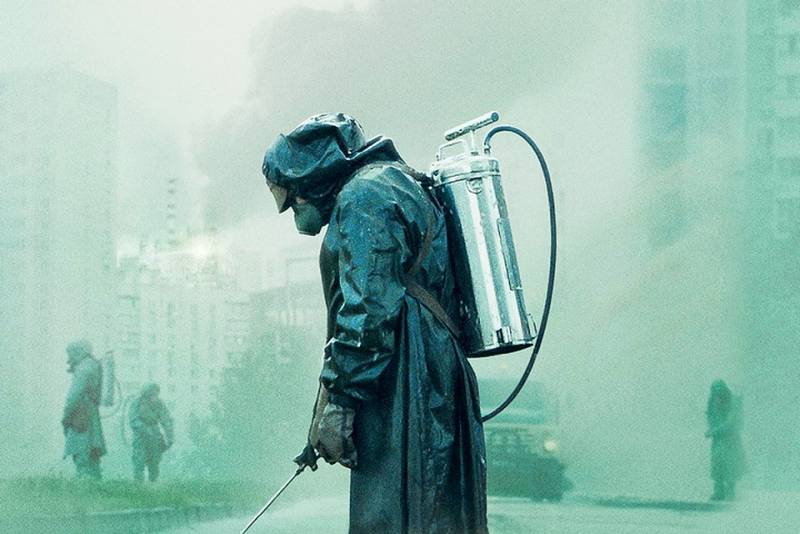 Cinematic "cranberries" can be different. There is an elegant "cranberry", gently and even lovingly infused with cognac. Such a “sticky” response from the screen in the voice of Sean Connery: “Holodrig”, or the roar of “iron Arnie”: “Cocainum”. This "cranberry" is obtained if in the director's chair a patented American like Walter Hill, for whom Russia (USSR, Russian Empire) is an alluring exotic. And, to be honest, we even like such a berry: we willingly parse it into quotes, making fun of the close-sighted Yankees.

But there is another “cranberry”, which the creators insist on a home-grown farmer's moonshine, from the smell of which even the hair in the nose straightens. Such products require the hands of true villagers, burned in farm perversions and preferably suffering from all migrant complexes of the third grade, unable to realize themselves in their native land. And there were a lot of such people after the collapse of the USSR. So, Dora Khomyak, a native of Kremenchug, became the main consultant of the Chernobyl series. And it doesn’t matter that due to age and education, the Hamster could not know anything about the Chernobyl events. The main thing is that she was an ideologically faithful villager who knew a lot about farm sivuha. They also say that principled Madame Aleksievich, who “licked” iron Felix to a state of sugar candy, in Soviet times, also contributed to the recipe for this fierce first-person. 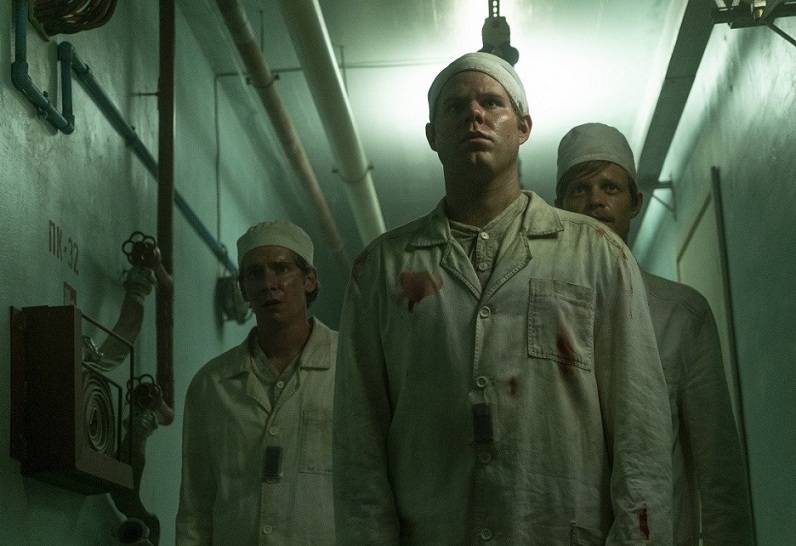 They were shown the "truth"

The mini-series, which specific film critics, without having time to watch the last series, instantly dubbed “ingenious,” was filmed by Hollywood artisans of a very average hand. The director was the Swede Johan Renk, for the time being added to the filming of series and numerous clips of mastodons of foreign pop music Beyoncé and Madonna. The screenwriter was the king of “farting” jokes of the whole series “Very scary movie” Craig Mazin, who was precisely “inspired” by the collaborative hallucinations of the Hamster Road.

And the last fact should not be surprised, because Ukrainian migrants in the heat of the next round of Russophobia quickly found a warm place in Hollywood. For example, one of such migrant descendants with the scent of collaboration by the name of George Mendeliuk in the 2017 year managed for his hack about the “Holodomor” “Harvest of the Devil” to shake the whole 20 million dollars out of pin-up movie companies. The picture failed, but the sediment remained.

It makes no sense to talk about the historicity of the Chernobyl series, because from the stage of creation to the stage of installation of the finished product, everything was subject to classical propaganda according to the canons of Dr. Goebbels. The series, in fact, is a collection of wild anti-Soviet gossip from the category “away from the watchful eye of KGC”, stitched by allegedly secret revelations of Professor Legasov, who actually took an active part in the liquidation of the Chernobyl accident. And already at this level, the picture begins to desperately slip. After all, no matter how agitated frenzy our "sworn friends" would fight, the plot of a work of art must possess internal logic and be whole. However, there are more holes in it than in a colander. 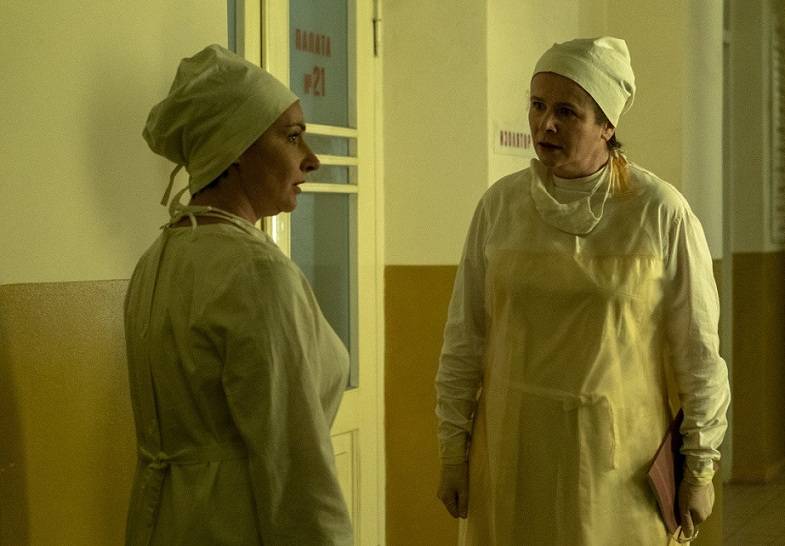 For example, in the picture, a decent timing is reserved for an anonymous party worker, who was remembered by the viewer with an enchanting speech demanding to “cut off telephone lines” of Pripyat. The old man “black angel” hovers on the screen, causing strained horror to the participants of the show. But this does not move the plot. Moreover, having rolled onto the screen such a powerful in its caricature image of a “communist” with rustling tiles, the authors immediately leaked it. Crazy grandfather will no longer please the viewer with the salute of his hallucinations.

The universe of the totalitarian “scoop”, born in the inflamed imagination of the scriptwriter and his consultants, is also flowing openly. So, in a super-guarded hospital with dying liquidators, in which KG is sitting in each ward under each bed and replacing infected urine with fresh and safe in breaks between denunciations, you can go for a small fraction. Anyone who wants to seize the moment of the omnipotence of the omnipotent totalitarian system by putting the chervonets to the doctor can make a real voyage in the wards. And, of course, everybody drinks vodka around the clock and makes brawls. 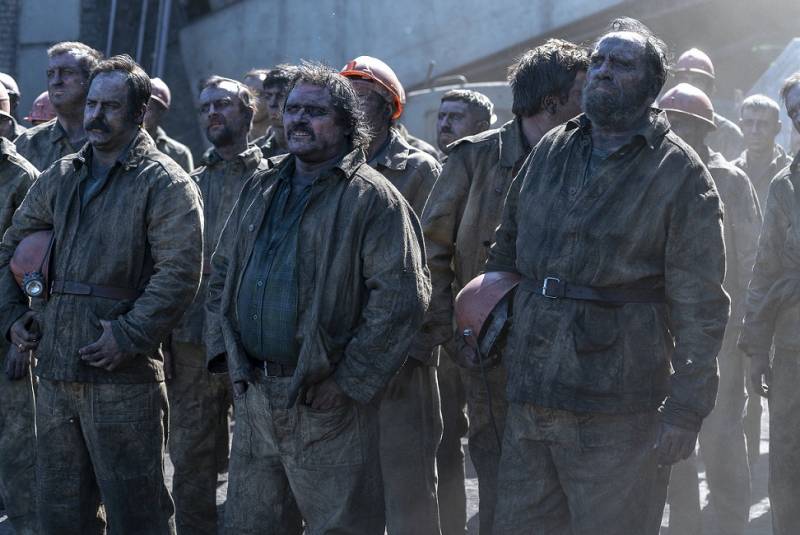 First vodka, and then a fight ... Or vice versa?

And again: packaging is our everything

Many near-political film critics, eager to fall into the rapids of fashion trends, were flooded with the praise of the painstaking work of production artists who selected the surroundings of the film and put it in a kind of facade of the series. In fact, the facade masking the current pipes in the house was built in detail. In search of artifacts of a more developed civilization, the Chernobyl team traveled all the scales of modern limitrophs - Ukraine and Lithuania, where, incidentally, the shooting took place.

And here lies one of the scams cleverly tested by the creators of the series. Such a thoroughly licked work on the facade is by no means a meticulous reconstruction of everyday life and the atmosphere of thirty years ago, but a manipulation of the picture. Over the course of thirty years, neither the infrastructure, nor the buildings, nor the artifacts obtained by the film team have been repaired or modernized. Poor life, crumbling apartments, roads that dissolve underfoot, dilapidated doors and cracked plaster - these are wholly and completely evidence of the degradation of the post-Soviet Limitrophs. 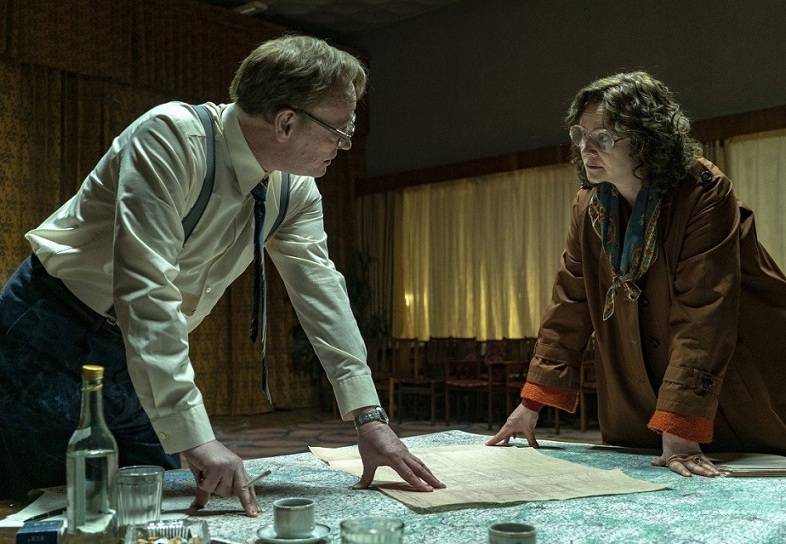 No tea, only vodka

We are not looking at the USSR at the end of the 80's, but at Ukraine and Lithuania in the first quarter of the 21 century. Moreover, part of the shootings took place at the Lithuanian Ignalina NPP, which not only has not been modernized, but has been actively and completely legitimately sawn into metal since the 2010 year! By the way, now the Lithuanians have started a small business on the fans of the series - they carry Western tourists to the rapidly falling apart ruins of the Union.

And all this elegantly fell on the roughly used tools of the director as an artist from the cinema. Previously, screenwriters and directors had been sophisticated in revealing the characters of the antagonists, putting together a mosaic of depression from the absurdity of what was happening, the ineffectiveness of the resistance to harsh reality and the escalation of suspense, during which light and sound were only small strokes in the big picture, because to paint a picture with the human emotions of the actors is a true work of art .

But the average man made a big leap from the 90's in terms of a drop in taste and educational level. Therefore, modern authors, having discarded thin brushes, arm themselves with a roller and a thick layer smear hopeless dull grayness across the screen, letting through even the treacherous sun ray treacherously framed into the frame, turning it into the breath of the GULAG. The deliberate grayness, multiplied by carefully collected Soviet junk, which was last cleaned in the 1987 year, gave a breathtaking effect, affecting the fragile and uneducated brains of the inhabitants, especially its minor part, which was admired by the "accuracy of Soviet life." 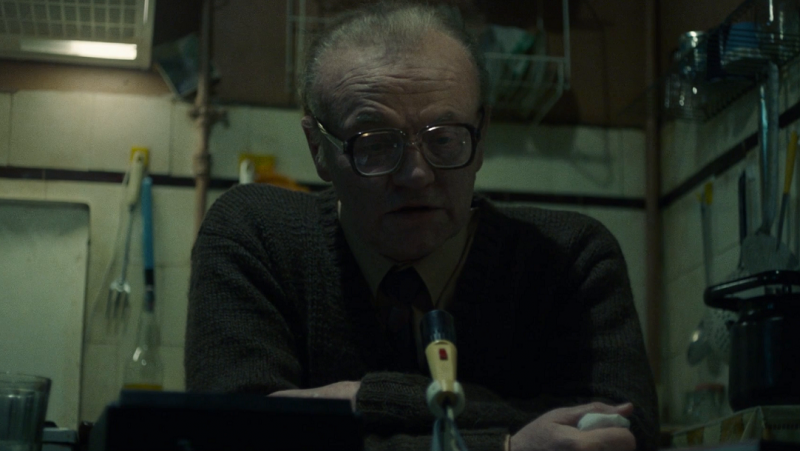 A simple member of the USSR Academy of Sciences is with you on the wire. Our tiles cracked, the ceiling fell off and the reactor smokes

Oddly enough, but, apparently, the general atmosphere in the team of the series was truly “their own”. The composer also appeared to be similar to artists and cameramen, who periodically jammed on the minor key of the synthesizer, while the grayness of Mordor poured out onto the viewer.

The actors did not go too far. No, the author does not at all consider Stellan Skarsgård with his “silver bear”, Emily Watson, the nominee for the American gold candy, and Jared Harris as bad actors. But embedded in the all-consuming gray reality of “Soviet hell”, pulsating with horror, hysteria and idiocy with each of its shots, the acting team made me angry and grimacing personally to heartburn. Seeing close-up the face of the next master, cramped or concreted with “shock,” in the sickening greenish-gray filter of the camera is not for the faint of heart.

But all this in no way will stop the army of fans, tamed by a critical mass of "independent" crowds of great film critics like Venediktov and his rational brother Anton Dolin.

But why do the ears of Western propaganda seem to us everywhere? Okay, let’s leave the artistic “virtues” alone. And let's move on to sad reality. Firstly, any cinematic process is a commercial enterprise. Only in the universe of free artists, where the wolves are full, and the sheep are not only whole, but also happy, no one intervenes in the art process, but simply works as an ATM. Thus, in reality, the sale of a product is bound to be profitable. For example, the series "Game of Thrones" of the HBO channel (the same channel that produced Chernobyl), the last episode of which was released in May of this year, is still virtually non-existent on the network - only for money. But Chernobyl, released in June, was uploaded to the World Wide Web almost instantly. Even now, to watch the "Game" for free, you will spend half an hour time, but for the "Chernobyl" long searches will not be needed. 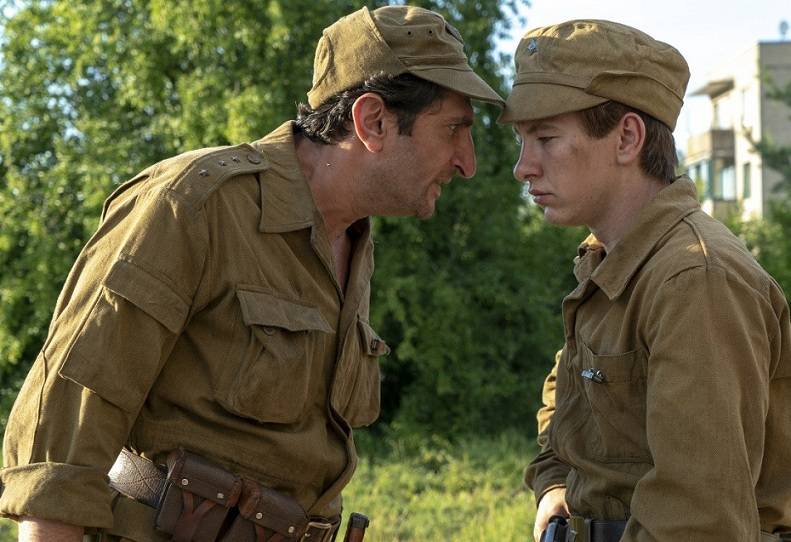 Secondly, the rating of the Chernobyl series jumped sharply on all Internet portals not only coincided with the wave of admiring the new masterpiece raised by pro-Western resources, but also quickly left behind a dozen cult TV series, overgrown with a true army of fans: from the designated “Games” to “ A real detective "and" Breaking Bad. "

Thirdly, at the start of Chernobyl production, the HBO channel was acquired by AT&T. In parallel, no less interesting events took place with the scandalous and almost bankrupt company Westinghouse Electric, which recently contributed to the introduction of some amendments to the administrative division of the territory of Japan related to the Fukushima nuclear power plant. Brookfield Infrastructure suddenly bought Westinghouse Electric. And, of course, by pure coincidence, the aforementioned AT&T announced a strategic alliance with Brookfield Infrastructure. And, of course, in view of the striking coincidence of disinterested activists and independent experts, the gray-green shots of Chernobyl pop up on posters and materials on the network at the mention of Rosatom (a monopolist in the nuclear market), and the near-by philistine grabs his heart.

We are in Yandex Zen
What you didn't want to know about England
Kurginyan: at the end of the 80-ies a catastrophe occurred
230 comments
Information
Dear reader, to leave comments on the publication, you must to register.