Finca. From artisans to mass production

Like someone in a tavern fight
Sadanul under the heart of a Finnish knife.
S. Yesenin

After the revolution, the manufacture of knives of the Finnish type was carried out by numerous artels and single handicraftsmen. Production was put on stream and bloomed densely in the twenties. After the ban of gunshot weapons Finnish knives are becoming very popular in the criminal environment, which led to the final tightening of the article 182 of the Criminal Code of the RSFSR from 1926 in 1935, where the manufacture, carrying, marketing, and storage of daggers, Finnish knives and other cold steel without the permission of the NKVD was punishable by up to 5 years.

Since Finland was part of the Russian Empire before the revolution (from the beginning of the 19th century), it is difficult to separate the knives of its production from other Russian ones, except for geographical and national characteristics.

There were quite a few Finnish-type knives; the very word “finca” in the USSR was used to name almost any knife related to what could hardly be called household-canteens. Finka were classic Finnish puuko-type knives, army knives HA-40, various crafts of zonov and factory craftsmen.

The fashion for the appearance of the knife has changed over time. It is quite easy to distinguish popular knives from the Second World War from handicrafts of the late 1980's - the beginning of the 1990's, when horrors appeared under the influence of Western films: "Die of envy, Rambo!"

The classic artel finca of the USSR of the 1920s differed from the typical Finnish of the same years, as a rule, with a more pronounced "pike" (the bevel curved to the cutting edge to the tip), the absence of dolly on the wedge, the presence of a ring on the front of the handle, and another shape of the handle and scabbard.

All the factors brought together make it easy to distinguish typical Soviet Finnish from Finnish. One example is the so-called finca-knot, mass-produced by the Zarya, Zvezda, and others.

The most common artelian Finn-knot had a blade about 130 mm long, a handle about 100 mm long, a wedge about 20 mm wide, a thickness at the base 4 mm, which gradually tapers towards the tip of the knife. A ring is put on the front of the handle, protecting it from cracking and filled with a compound or low-melting metal. The mounting of the handle of the fin was done through, with riveting at the end of the handle. The dimensions of the blade are believed to be divided by numbers depending on the length of the blade and began with No. 1 (the smallest) and higher. As for the sizes, there is no complete clarity, it happens that the wedge under No. 4 of one artel is more than the wedge of No. 5 of another, it seems that everyone had their own artel standards (as TU now), or the masters didn’t fool themselves by putting numbers, and they were just confused. And often there were no rooms.

At first glance, the rather unusual handle of a Finnish-bitch looks awkward and unusual to the touch, but behaves very well when used. I made a similar knife for testing with a minimum of tools, especially not observing the proportion of the blade, just to feel how it will behave in the hand. The findings are exceptionally positive, but this is a matter of taste.

A finca of this type was shown in the first Soviet sound film "A ticket to life" (was with Yashka Zhigan), filmed in 1931; there was a boy who was riding a hare to the Arctic to the Chelyuskins in the film "Once Upon a Summer"; a similar metal Said in the movie "The White Sun of the Desert." 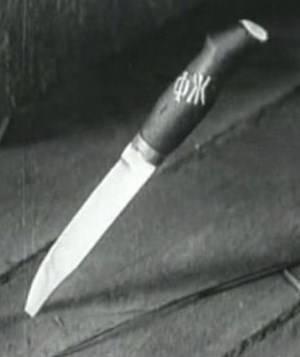 Finka Yashka Zhigan from the movie "A ticket to life"

During World War II, the production of knives broke out with renewed vigor. After toughening the legislation, universal and combat knives were sorely lacking, and every fighter needed them. Numerous factories and artels produced knives for the front, such as the HA-40. Even before the war, the Trud plant (Vacha) mastered the production of a diving knife (they put a rubber tire with a ribbed surface on the wooden handle of a Finnish knife and made rubber sheaths for it).

Finnish type knife. Factory "Labor", Vacha. A ribbed rubber tire was put on this type of knife, turning it into a “diver”

They produced knives for individual units: black knives of the Ural Volunteer Tank Corps, knives and daggers of the Izhora battalion. Well, in numerous repair shops, repair battalions and airfield maintenance battalions, the craftsmen arranged the production of a variety of finishes using improvised materials. It was during the Second World War that knives with typesetting handles made of plexiglass aircraft lanterns, multi-colored soap dishes and other similar material began to spread widely.

Garda on knives began to be used more widely

Craftsmen used material with broken equipment, for example, brace ribbons of planes went to knife blades. The forms of knives are very different, from simple classical to peeped by allies and opponents, those that came in the configuration for Lend-Lease products, and simply alterations from captured bayonet-knives. Finks were widely presented to friends and command personnel, made with commemorative engravings and inscriptions. 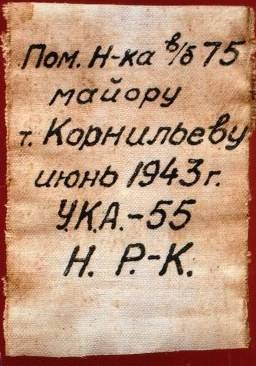 Blockade Finca with a homemade handle 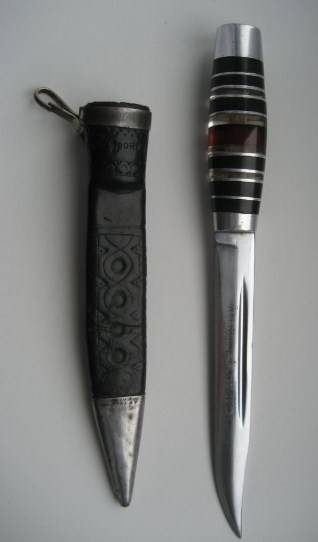 Loafers-Finns, who were sitting in dugouts near Leningrad, gave out a very interesting product in the form of hammered aluminum scabbards made from the bodies of downed planes. Such sheaths were riveted from two halves of duralumin sheets, inside they were glued with cloth or leather. If the mass production of knives in Finland was limited to the production of simple scabbard from cardboard due to leather deficiency, then at the front it turned to the fullest. At the positions of the Finnish troops, the search engines found a mold for smelting the "fungus" (the base of the handle, the most popular among the Finns in those years), apparently made of a brass shell shell. Just like our craftsmen, the Finns used organics to set the hilt of their knives. 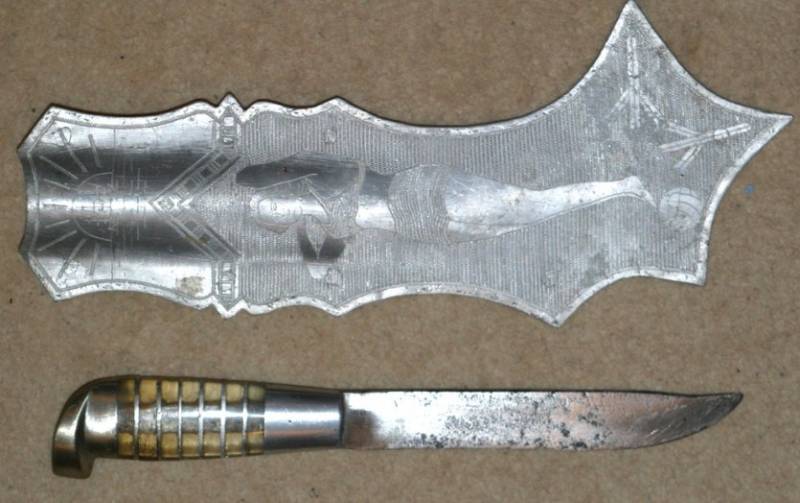 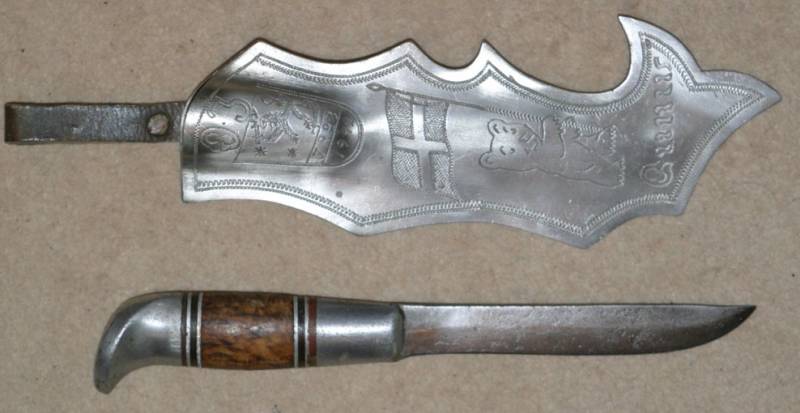 And with a wooden scabbard

After the war, the production of Finnish type knives in the USSR stalled. Artels switched to the production of peaceful products; by order of the Moscow Region, they released only sets for cooks. Although it is worth remembering that a folding garden knife was equipped with sanitary bags, and during the Second World War, according to some reports, the knife was used as a sling cutter. The production of Finnish became the priority of the sidelings from places not so distant up to the 90 of the last century and the result of a certain relaxation of the legislation on chemical weapons.

Photos honestly taken with the permission of A. A. Mack, author of editions on edged weapons and collector.