August 7 2019
73
Not so long ago, in one of the materials, I sadly complained that the debilitation of society in the information space is becoming rampant. I translate: the people are dumb. And here is another confirmation of this.


Actually, I was looking for information completely off this topic, but I was simply shocked at how many people on the Internet simply thoughtlessly copying nonsense and nonsense. Fruiting myths and legends with such certainty that he takes the hell.

Just as all these Zen ones in particular fell off the chain. About social networks I am silent about frontal armor tank head, but there’s nothing to be done, apparently.

It remains only to take and debunk these myths, which, in general, are completely foolish. About helmets that puzzled soldiers, about guns that didn’t shoot, oh ... yes there are a lot of topics today.

I'll start with the myth, then let's talk about things not so serious, but entertaining. Forgive me, that everything is in one bowler hat, but we are talking about helmets, because it seems to be normal. 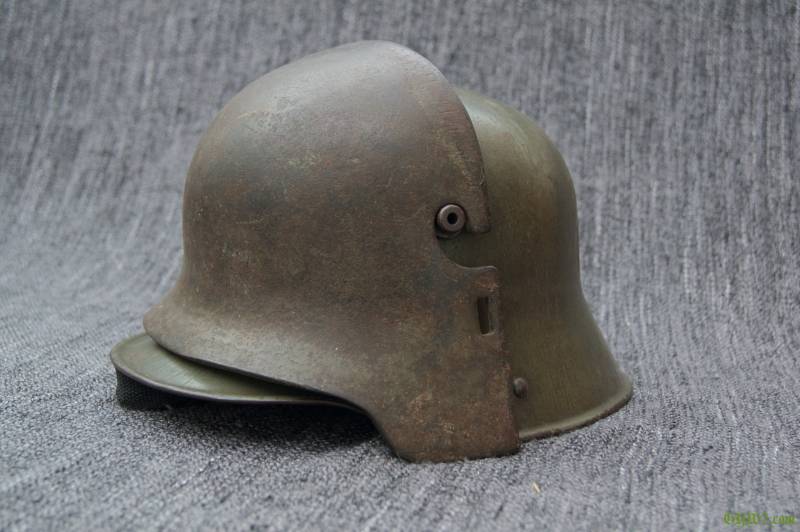 So, 9 of 10,5 Internet users (0,5 is the one who posted another myth) are sure that the horns on the German helmet are a tribute to the sagas and ancient German traditions. Okay, exaggerating, of course, but история with helmets on helmets is an indicator.

Through the efforts of Internet warriors, many are already aware that a steel plate was attached to these horns, which strengthened the armor and extinguished the effects of the rifle bullet.

This is where the doomsday began ...

The idea, type, class, performance is not a cake at all, because the poor German stormtroopers almost took their heads off. But yes, they quickly abandoned this venture precisely because the miserable necks of the German infantry were more expensive for them, infantry.

What is so? Well, nothing special, except that all this is fiction, from the first to the last word.

The indignant cries of "what about Wikipedia?" It would be interesting to find the one who posted this nonsense on Vika.

But the glory of coincidence, in Russia smart people were not transferred, capable of something more than to spread fiction in the yards. For example, Pavel Prokhorov from the Steel Helmet group, who gave a simply magnificent account of the entire history of this unfortunate shield. I’ll give a link in the sources, there is a lot of interesting information. 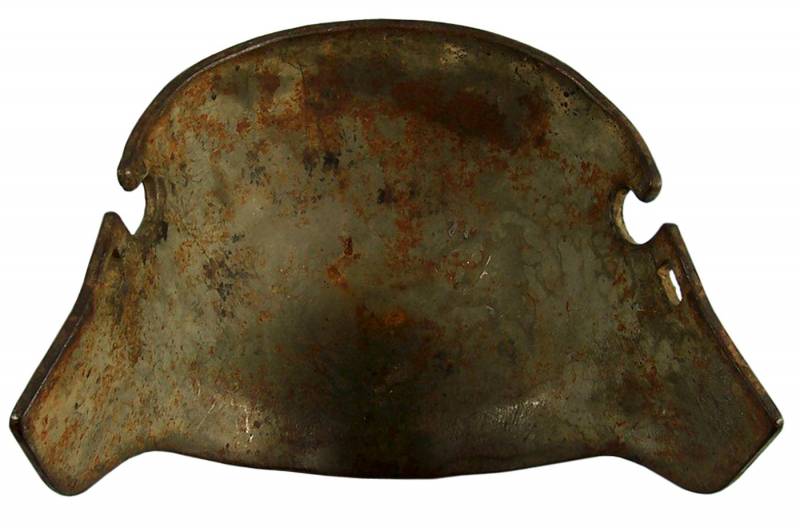 The only thing that is not there is the slightest documentary, well, at least some kind of piece of paper that can be referred to, on the basis of which it can be firmly said that the soldiers refused to use the foreheads, because their heads were torn off.

And what was really?

But in fact it was the year 1915 and Reichswehr had problems. There was a war, helmets were needed to protect the heads of soldiers. Everyone understood that this thing was very useful in the trench warfare. Well, maybe, except for the Russians, and even then we ordered Adrian's helmets to the allies.

The Germans were simple. Helmets were necessary, but, starting the evolution from a ridiculous and not very durable "pickelhelm", the output was a steel helmet of Captain Schwerd. But he also began to raise complaints about his ability to stop bullets and splinters. In particular shrapnel. 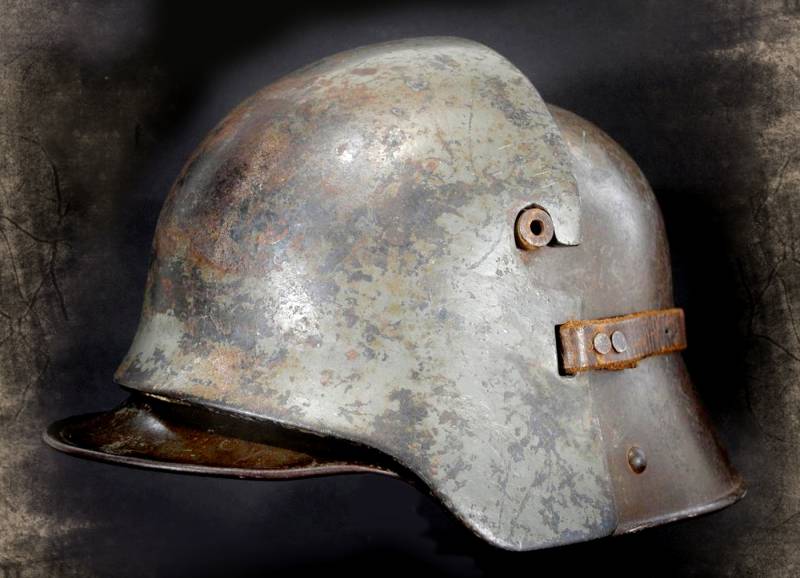 The helmet had to either be thickened (heavier), or more modern materials should be used.

Captain Shverd wrote in an explanatory note on this subject that, in order for the helmet to meet all the requirements, 1,5% chromium-nickel steel must be used for its manufacture.

And the production of 1 million helmets required 15 tons of pure nickel. And Krupp, and "Steelwork" twisted a finger at the temple, giving birth to such an amount of nickel at that time was unrealistic. The blockade of Germany by the Entente has already affected.

And without nickel, the helmet would have been 15-20% heavier, which was also not very pleasant. Plus - again, the additional consumption of steel, which could be used for something else.

And then the Germans came up with a rather original move. This same steel plate was invented, which was attached with the help of horns and a belt on the front side of the helmet.

The plate weighed about 1 kg, which, in fact, was really hard.

However, no one had ever planned to send assault groups or simple fighters in helmets with these plates to attack. Indeed, this is just stupid, and the Germans were not stupid.

In the instructions for use, because the Germans were masters in terms of inventing instructions, it was said that the forehead should be used in special tactical conditions in the positional struggle and against the fire of enemy infantry.

The forehead had to be carried by a soldier in a satchel or in some other way along with personal belongings, but so that he (the forehead) could be quickly attached to the helmet.

They even came up with the appropriate command: “Schutzschilde hoch!” (“Shields up!”). The shields of the foreheads can be considered conditionally, but nonetheless.

The most interesting: who should throw the “shield” on top? That is, attach the visor to the helmet?

This was also regulated. And in German, simply and tastefully.

1. Artillery scouts.
2. Artillery and mortar spotters.
3. Trench observers. That is, those who were supposed to watch the movements of enemy infantry and (not least in World War I) gas attacks during artillery preparation.
4. Machine gun crew duty.

Everything is logical, those who did not leave for shelter and were in a situation where there was an opportunity to part with life should have received additional protection. 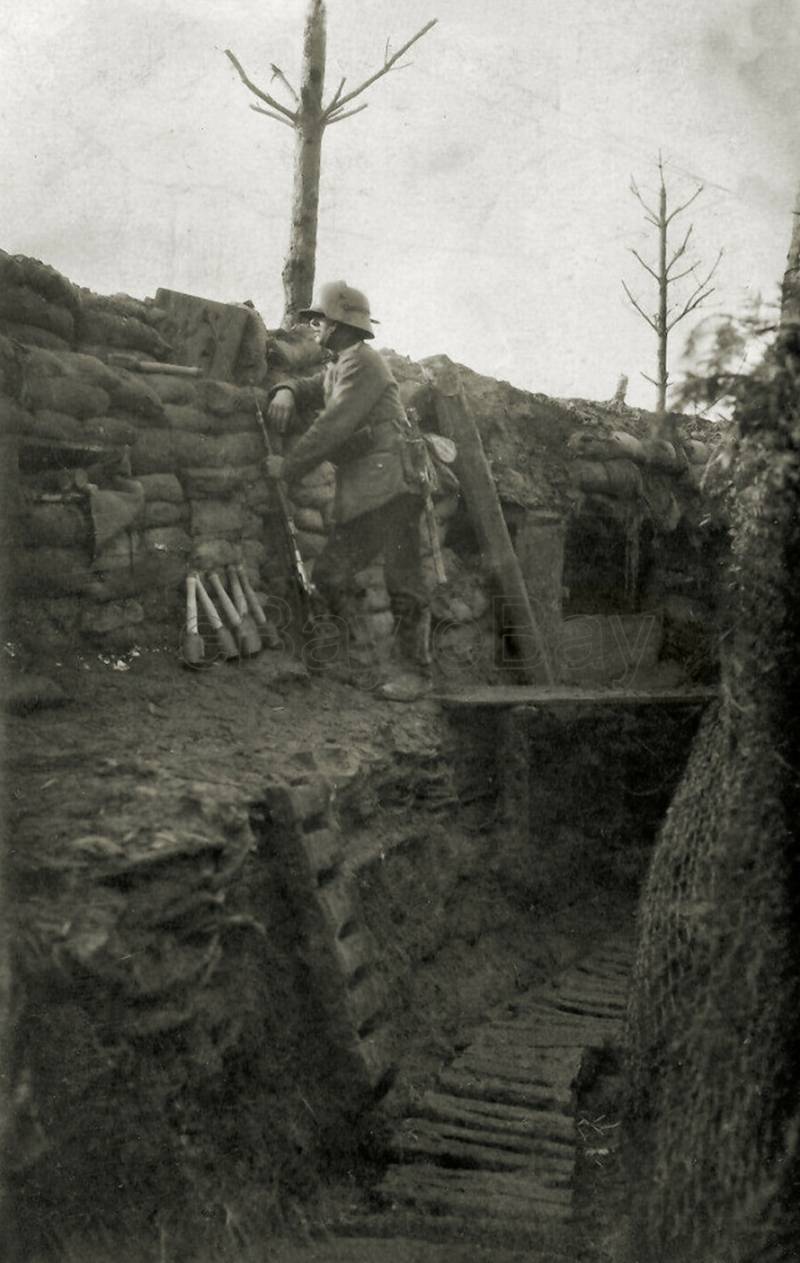 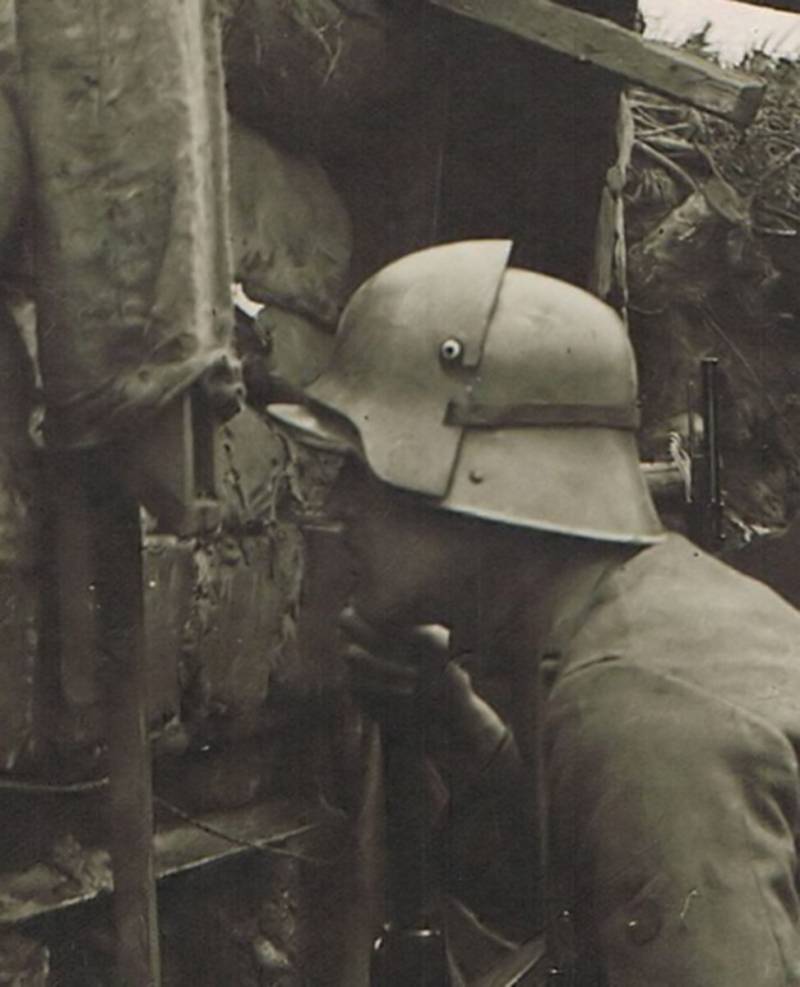 No stormtroopers with an extra kilogram of steel were on the head. Not about any soldiers going on the attack. Soldiers exclusively on the defensive are exposed, as they would say now, to additional risk factors.

This is the Germans, damn it, not the Papua Guard ...

And therefore, the head-pads were planned for the production of only 5% of the total.

And the foreheads were quite successfully worn by the Germans and their allies until the end of the war. 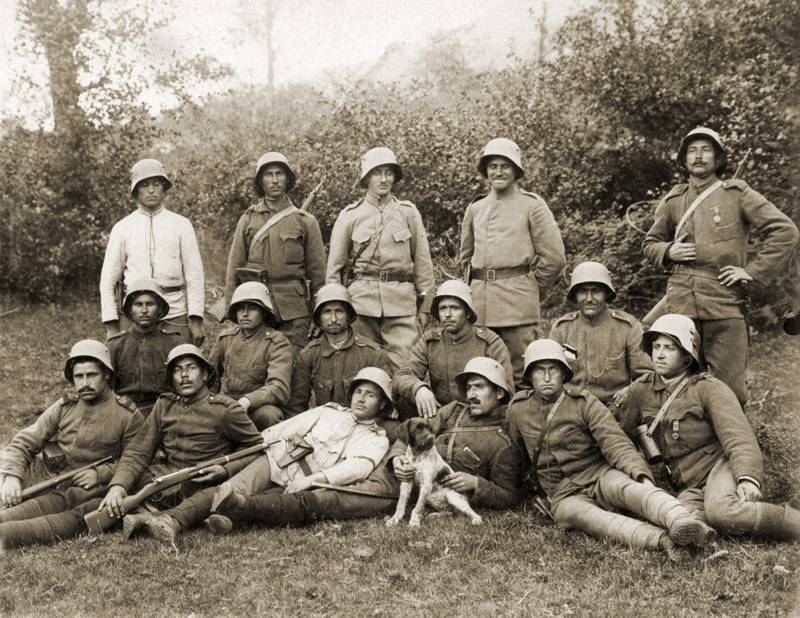 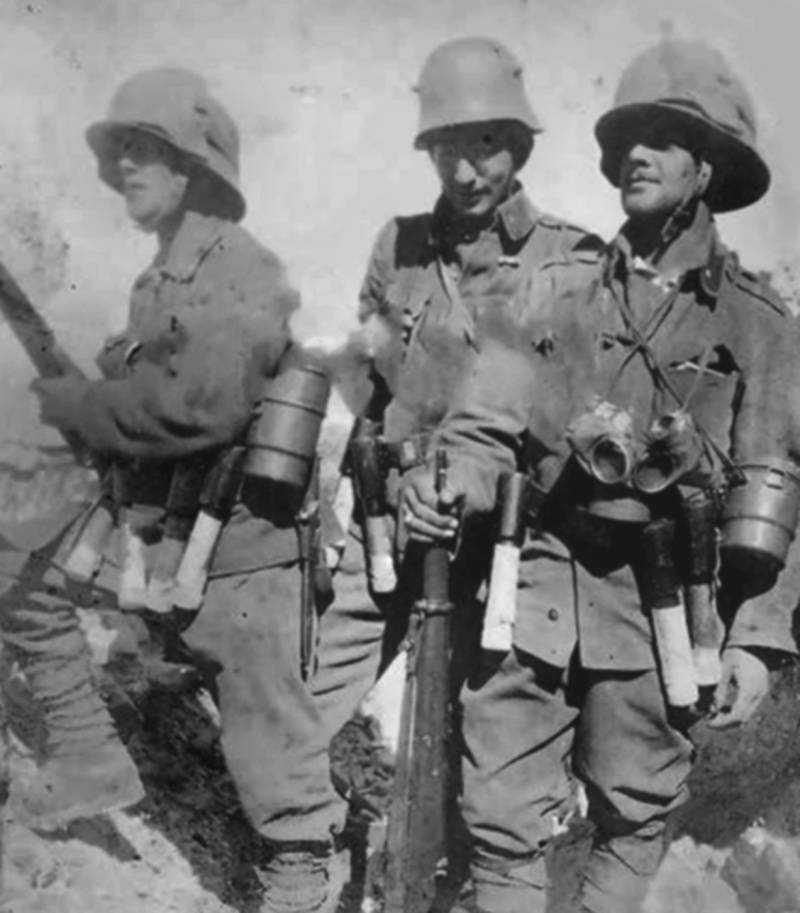 Nothing broke down, the Reichswehr continued to order his foreheads, moreover, such devices were in service with the French and American armies.

Yes, the weight was a negative point. In principle, he spoiled the whole thing, but nevertheless, the annals of history did not save ANY case of fractures of the cervical vertebrae in any soldier in the warring armies.

By the way, I completely admit that there have been cases. Single. And then the “soldier’s radio” spread the rumors and gossip into units. And the "horror stories" did their job.

Well, in our time, in general, God himself ordered to post gossip and fables that have nothing to do with reality. Alas, this is the reality of today. 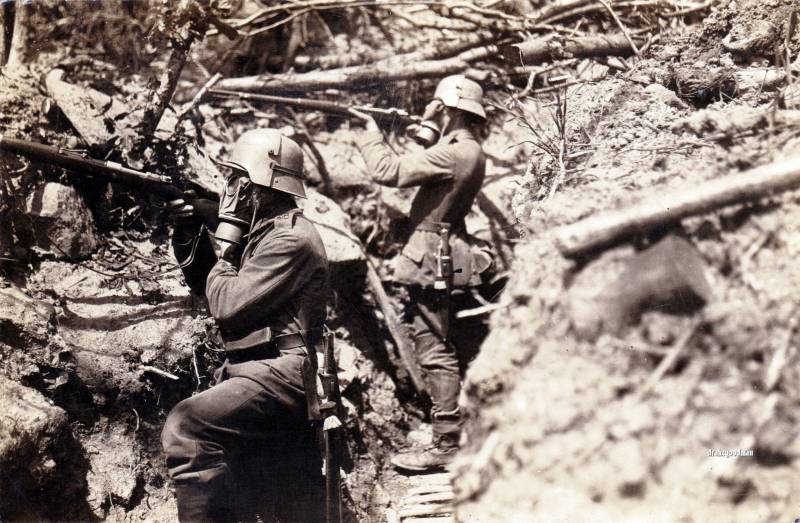 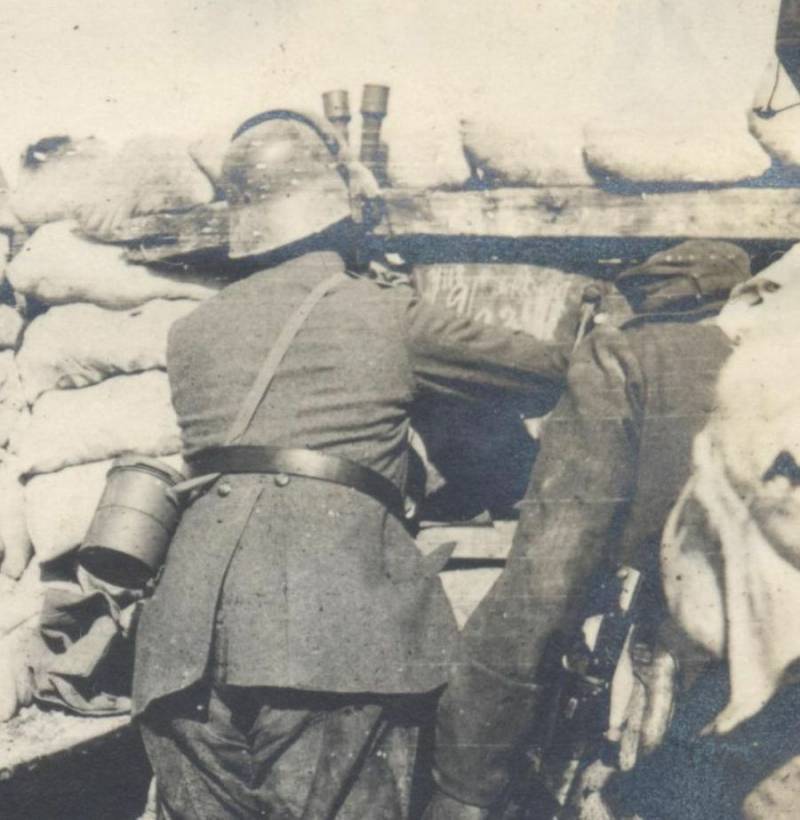 1. The guards for steel helmets of the German army were produced in scanty quantities. There were only about 50 000 pieces of them, with a total production of helmets of more than 6 millions.

2. There were no cases of neck fractures when a bullet hit a helmet weighted by a shield.

3. In the same way, helmets were reinforced in other armies. Helmets fought the whole war.

4. Neither the attack aircraft nor the infantry went on the attack with the helmet on their helmets, did not make marches in such vestments. The headband was intended for use in limited prescribed situations.

Stories about serious injuries are nothing more than the myth-making of an online audience.