Explosions against mines. Mine clearance “190 Object”

August 9 2019
17
At the end of the seventies, the UR-77 Meteorite mine clearing system, using extended charges, entered service with the Soviet army. Soon after, the development of the next model of this kind began. The result of the work was the installation of "Object 190" or UR-88. However, for a number of reasons, it was not put into operation and was forgotten. 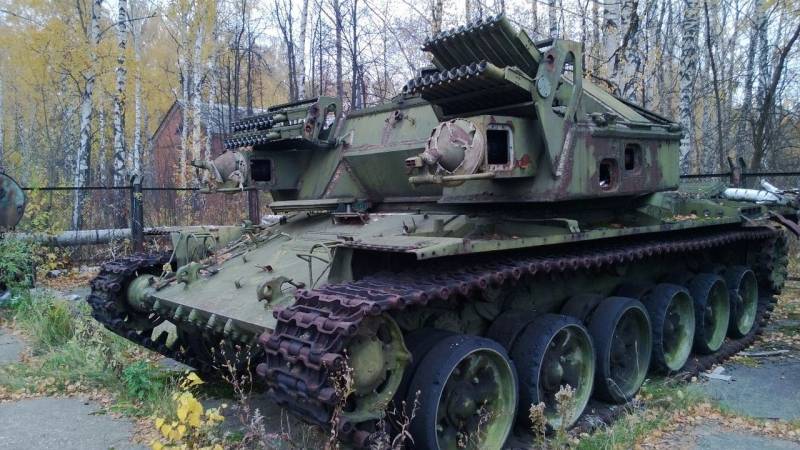 The decision to start work on a new model of engineering equipment was made by the Ministry of Defense and the Ministry of Industry at the end of the 1977. In the middle of the 1978, the Military Industrial Commission decided to start research work with the code "Lira".

The purpose of the Lira research work was to search for new ideas in the field of landmine destruction. Then, based on the solution found, it was required to develop a technical project. The Ural Design Bureau of Transport Engineering was appointed the lead contractor. The demining system of a new type for mounting on a self-propelled machine should have been designed by the Chelyabinsk SKB-200 plant named after Ordzhonikidze and SKB "Rotor".

During the research, it was determined that systems based on a volume explosion show great potential in mine clearance. This principle involved the spraying of a combustible liquid over the minefield, followed by its ignition. The explosion was to create a powerful shock wave, capable of damaging or throwing out mines installed in the ground.

In May 1981, the participants of the Lira project were instructed to begin the development and construction of a prototype of new equipment. Over the next few weeks, part of the required items were required to be presented. Soon, the first factory tests took place. In August, the 1982 of the R&D Lira was transformed into the oboe development work.

The Lira / Oboe prototype was designated as “190 Object”. In some sources, it is called by the designation of OCD. In addition, it is mentioned that this machine received the army index UR-88.

"Object 190" was built on the basis of the main combat tank T-72. The armored car lost the turret and the standard equipment of the fighting compartment. Instead, they mounted a new superstructure with special equipment for solving mine clearance tasks. The dome with equipment and weapons was mounted directly on the pursuit of the body, but could not rotate. The original clearance system received the 9EC index. 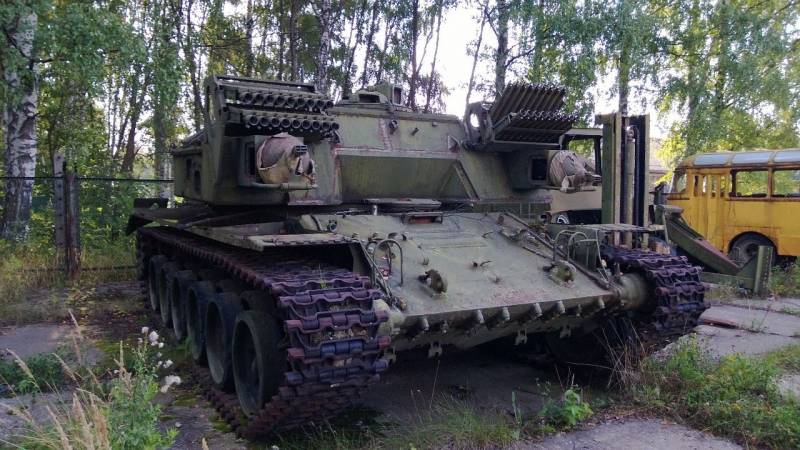 The add-on for the Oboe was made of armor plates, which provided protection from bullets and small-caliber shells. It had a straightened frontal part with a niche for access to the driver’s hatch. On the sides of the forehead of the superstructure were spray nozzle launchers and explosive ordnance launchers. Under the protection of armor there was a workplace for the operator. The side boxes and the aft part of the superstructure probably contained bulk tanks for the combustible mixture.

The “190 Object” transported 2140 liters of the volume-detonating mixture supplied to two frontal hoses. The latter had a vertical guidance system, which allowed changing the range of the liquid ejection.

To ignite a combustible cloud, special pyrotechnic charges were used. For their use on the superstructure, two paired launchers were provided. Initially, each installation had two blocks with eight barrels - the total ammunition of the 32 shot. Subsequently, each block received one additional barrel.

The 190 Object demining plant was also proposed to be equipped with a knife trawl with an electromagnetic prefix. The trawl ensured the fight against explosive devices near the armored car, and its own equipment was supposed to affect the threats at a slightly greater distance.

For self-defense, it was proposed to use a turret with a large-caliber machine gun NSVT, borrowed from serial tanks. It was unclear whether it was planned to equip Oboe with additional reservations as dynamic protection.

The crew of the car included two people: the commander-operator and the driver. The driver was located in its place inside the case. The commander’s place was inside the new superstructure. It was equipped with its own sunroof with viewing instruments and the necessary control panels.

Within the framework of the Lira research and development work and the Goboy design and development work, a very interesting way was formed to combat mines installed in the ground or in a throw. The self-propelled mine clearing facility “Object 190” was to enter the minefield using a standard knife trawl, which prevented explosive devices from getting under the tracks and underbody. 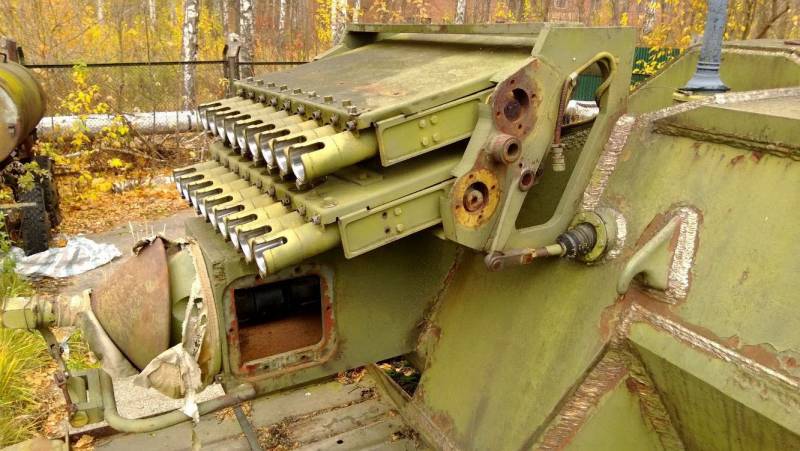 To perform mine clearance, the machine paused and then sprayed the combustible mixture over the minefield. Existing nozzles allowed to throw aerosol to a range of up to 16-18 m. The mixture formed a cloud in the air, and also fell into the upper soil layer. Then the launcher fired a pyrotechnic ammunition, and it provoked a volume explosion of the air-fuel mixture.

An explosion of one portion of the volume-detonating mixture reliably cleared a site of 12x6 m from anti-tank and anti-personnel mines. The shock wave of a volume explosion destroyed mines in the ground or on the surface of the earth, provoked their detonation or threw them out of the passage.

After the explosion, the “190 Object” could continue to move. After driving 10-12 m, the machine had to again perform the throwing of the mixture and blasting. Subject to the recommended operating modes, the mine clearing facility could process a passage with a width of 5-6 m and a length of up to 310-320 m. For this work, considerable time was required.

In 1983, the Uralvagonzavod enterprise, according to documentation from UKBTM and other developers of the 190 Object, built the first and only prototype of a promising mine clearance plant. Soon he was taken to factory tests.

For a number of reasons, the development of the structure was delayed. All stages of the tests continued until 1989, which led to negative consequences. By this time, the army and the defense industry were facing serious problems, and the fate of many promising models was in question.

In May 1989, the self-propelled mine clearance facility “Object 190” was put into service under the name UR-88. However on this история The project has actually ended. In connection with the new political and economic course of the authorities, the army did not have funding for the purchase of new equipment. As a result, the production of Oboe did not begin. In combat units did not receive a single such machine. 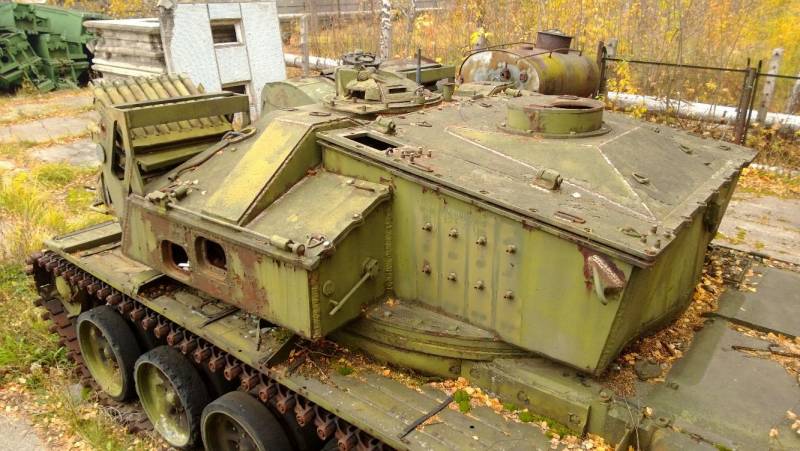 Left side, roof and feed superstructure

The only prototype built remained at the disposal of the Central Research Institute of Engineering Troops of the Ministry of Defense. It was partially dismantled, and then put on one of the storage sites. The removal of units and storage in the open did not contribute to maintaining good technical condition.

The “190 Object” or UR-88 became known to the general public only a few years ago, when the first photos of the prototype in storage appeared. At that time, the appearance and condition of the machine left much to be desired. According to the latest data, last year a unique sample underwent some repairs, after which it ended up in the museum of the 15 Central Research Institute. Unfortunately, this museum is not accessible to the general public. Photos of the restored Oboe have not yet been published.

Obviously, the UR-88 mine clearance unit could not get into the troops for the simplest and most trivial reason - due to lack of funding and a change in state policy. Nevertheless, the technical aspects of the project should be considered in order to assess its potential in real-life conditions.

First of all, the “190 Object” was interesting in an original way of mine clearing, which had not previously been used in domestic projects. At the same time, as tests showed, sufficient work efficiency was provided. Also a plus should be considered the lack of direct contact of the mine with mines - except for the hinged trawl. This reduced the risk of damage to the working bodies and allowed to continue working after a series of mine explosions. The advantages could be considered a unified chassis, minimal crew and the lack of need for special ammunition.

However, there were also disadvantages. First of all, these are problems with combat stability associated with the presence of 2 thousand liters of flammable liquid. Shelling from the enemy could have the most sad consequences. From the point of view of mine clearance speed, the 190 Object had no advantages over other equipment with traditional design trawls. Due to the non-contact work with mines UR-88, it could be considered a competitor of the UR-77 installation, but the latter favorably differed both in speed of operation and radius of action.

Thus, the result of OKB “Oboe” was a rather interesting and promising mine clearance plant, capable of effectively solving its range of tasks and complement other domestic models. However, due to financial and political problems, UR-88 did not reach the army. The troops had to continue to operate only existing models.