Europe from the window of the bus. The Unthinkable 2

A young commander
Carried with a broken head.
A blank hit the tank.
Goodbye, dear crew!
Four corpses near the tank
Complement the morning landscape.
Soviet military song "Tanks rumbled across the field." It is considered popular

To the West and back on the bus. To begin with, a certificate from Wikipedia, which, as you know, knows everything or almost everything, although not always at the proper level. And yet. We read: "Operation" Unthinkable "(Eng. Operation Unthinkable) is the code name for two plans (offensive, then defensive) in the event of a military conflict between, on the one hand, the British Empire and the United States, and, on the other hand, the USSR, developed in the spring in the summer of 1945 of the year. Both plans were developed on the instructions of Prime Minister Winston Churchill by the Joint Planning Headquarters of the British War Cabinet, in the deepest secrecy, even from other headquarters. ” Readers of VO love to cite this plan as an example of the treachery of Western allies. However, in reality there is nothing of the kind. Just foresight and state wisdom. Always, as you know, only yours are betrayed, and история He knows many examples. So Churchill decided to hedge himself on the same occasion and did the right thing. It’s just that this plan has been made public, but our plans to continue the advance to the Atlantic Ocean are still classified. Indeed, a huge part of our documents on the war remains a mystery behind seven seals, and it is supposed to open it only ... in the 2045 year. However, now we’ll be talking about something completely different ... 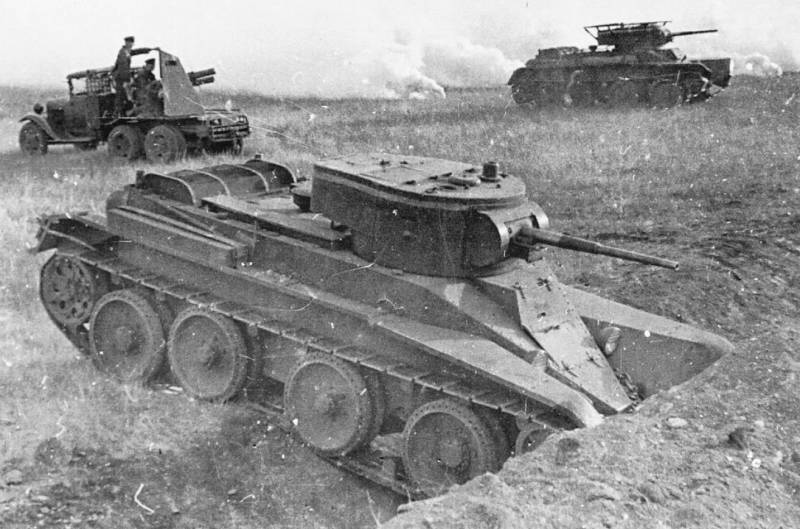 The BT-7 tank maneuvers the ditch. But did he overcome it?

Imagine that you are riding in a comfortable bus through the territory of modern Poland, Germany, Austria, and then you get the idea that it might happen that our tanks again rush to the same places to the West. Well, you never know what, right? It seems that we do not have a reason for this, but after all, were we preparing to wash our boots in the waves of the Atlantic Ocean? We prepared, and even wrote more than once, about how our T-80, capable of refueling at any gas station, would rush along the highway there to the West and in three would reach Brittany. It was so? It was! Did such plans exist in our General Staff? They should have existed, otherwise for what there people would receive ranks and salaries. Everything needs to be foreseen! Because 41 should not be repeated. But how can a tank breakthrough be realized in the next operation ... well, let's say, let's call it The Unthinkable 2? Let's look at all the pros and cons. 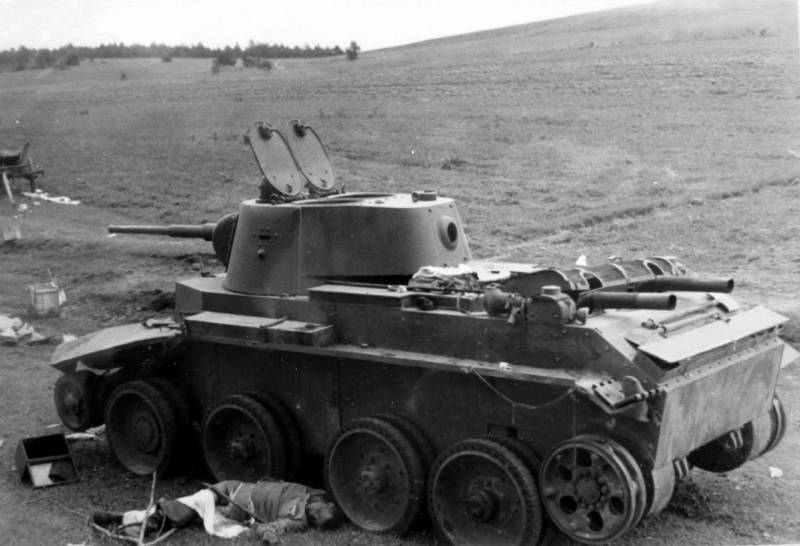 As you know, in the era of the USSR, our country before the war with Hitler had more tanks than all other countries of the world combined. Where did they all go then, we won’t find out here, only to note that there were a lot of them. The Warsaw Pact had even more tanks, and then the frontier of advanced tank formations was very close to West Germany. Now there is none of this. 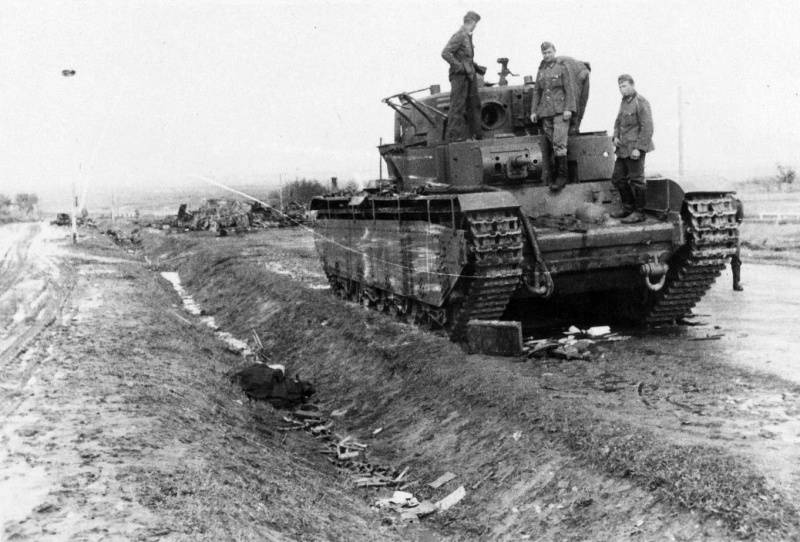 Tanks can move both on rough terrain (but not on any), and on the highway. The experience of recent local wars shows that it is the highway that is preferable in all respects. Especially if the army has high-speed wheeled vehicles with artillery comparable in power to tank. France has a lot of such cars, and why, understandably. There is a beautiful road network and nearby are the same roads in Belgium, the Netherlands, Germany, Italy and Spain. 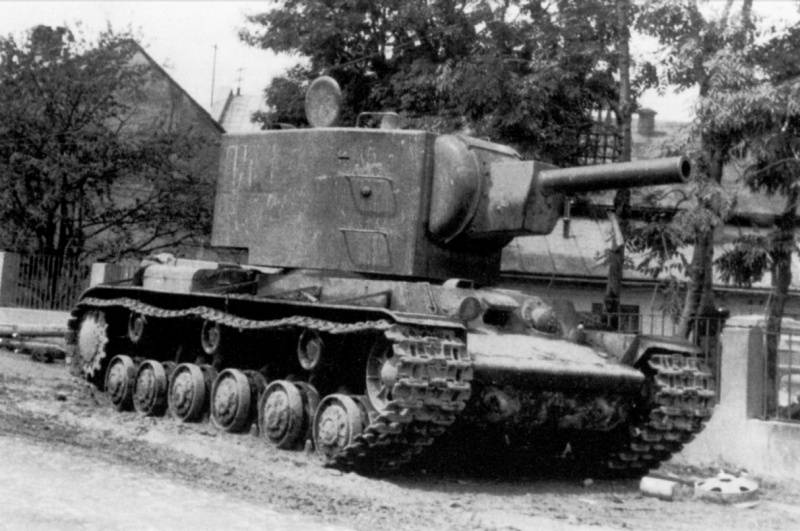 Tanks that move through fields and forests, force meridional rivers and bypass numerous swamps cannot be developed at high speed. Fuel consumption will be increased. And it will be necessary to bring him up for something. There are no gas stations in the forest. 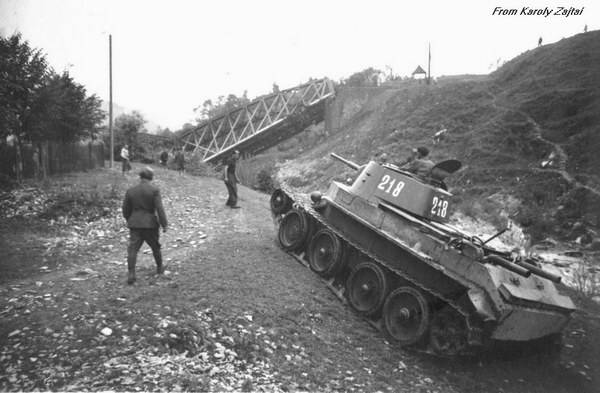 Tank BT-7 at the road near Vyazma. High speed did not save him!

So again the highway. Beautiful western highways, of which there are a lot. But the trouble is, there are also a lot of concrete bridges crossing these highways. What are they like? Oh, these are structures of very different designs, which usually rely on concrete supports. Rows of one, two, three, four, and finally five pillars that stand under the bridges in one or two rows. The supports are very different: rectangular solid concrete blocks (you think why such a thickness of the support is under a small, in fact, bridge), round columns - five in two rows between the carriageways. One column, installed directly in the middle of the six-lane highway on the “island” - in short, the bridges there are for every taste. 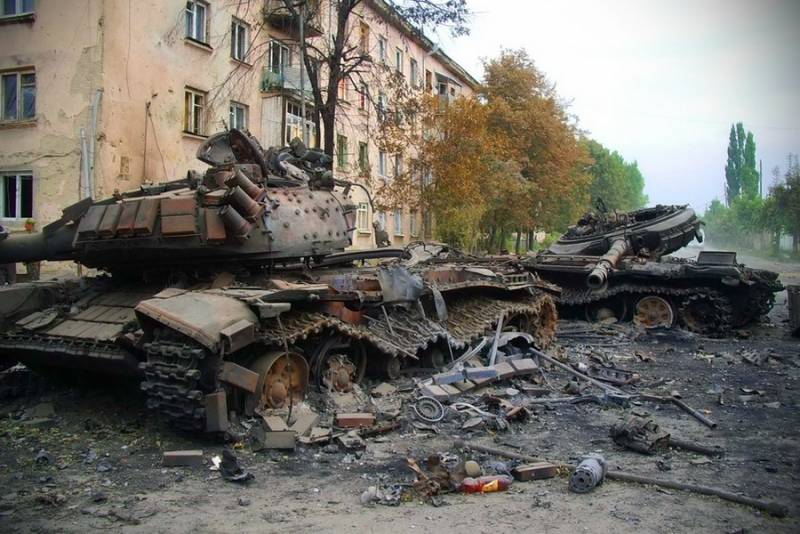 Tanks on the streets of Grozny, 1995 year

The retaining walls are also different. There are vertical, lined with stone. There are sloping and also with stone cladding.

Highways themselves are also frequent, especially in Austria, Italy and Switzerland pass over bridges. And the highway there dive into the tunnels. From Monte Carlo to Genoa there are so many of them that I lost counting a dozen. And many are very long. That is, from a military point of view, we are faced with ideal obstacles for the enemy’s motorized equipment moving westward along these highways. It is enough to blow up a couple of these tunnels and bridges and ... you can get to the same Genoa and Marseille only by sea, and this is unrealistic from the word at all. 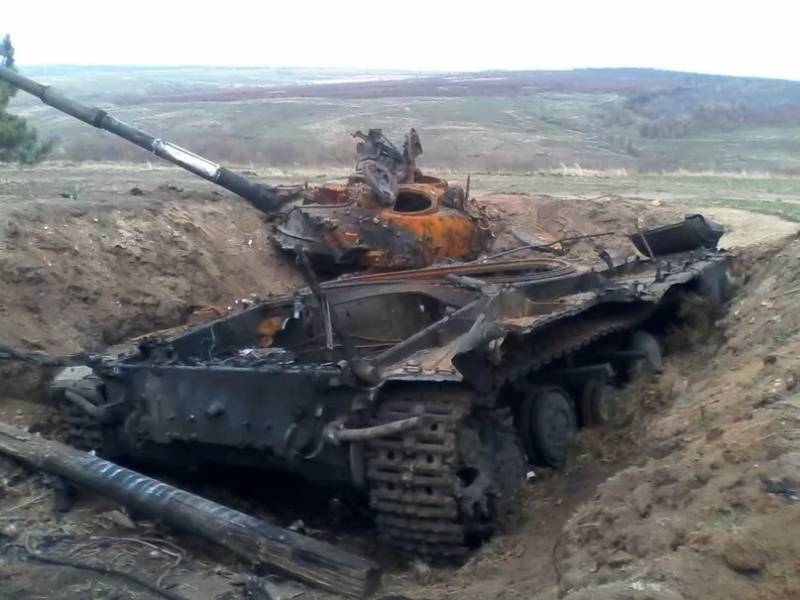 And this is a wrecked tank on a flat terrain. Also Chechnya ...

It is difficult to say whether the builders of these bridges provided for the early mining of these tunnels, but personally, I would ... foresee. I would have put explosives into the arches right at the time of construction and would have brought the button for their detonation into the briefcase of the Prime Minister or Minister of Defense. “Russians are coming” - and bang-bang, the road is closed! 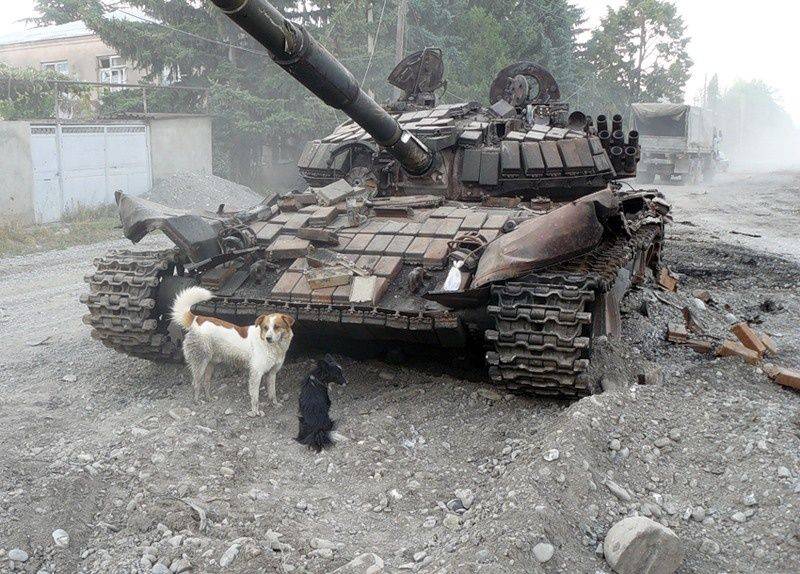 But back to the perpendicular bridges. I am not a specialist in mine-demolition business, but it’s obvious that if enemy tanks advance along the highway, it’s enough to bring down such a highway or pedestrian bridge onto the carriageway of the road below it to completely block any movement on it. To do this, it is necessary to undermine its supports - one, two, four, six, ten, and blow up the bridge itself near the retaining walls with charges of directed action, so that it collapses down and clogs the passage tightly. Enemy tanks simply will not be able to remove this obstacle. There will not be enough shells to shoot, but to move ... they will be able to move them, but only if they have special equipment with drop ramps. In such a way as to enable tanks to cross this bridge. That is, on one bridge you will need two such ramps. And there will be extremely many bridges on our way, as was already emphasized above. So, as part of the assault columns, not only tanks and missile-artillery anti-aircraft defense systems will have to go, but also such vehicles. And in large numbers. Because any hitch near such a collapsed bridge will play into the hands of the enemy and will make it possible to deliver rocket-bombing strikes on the technique that has piled up on the highway. Well, undermining all bridges will make the roads expensive for all types of equipment simply useless and make it crawl through fields, forests, mountains and rivers, through minefields, under fire from ATGMs, combat helicopters, drones and tanks that have already been dug in, not to mention artillery and RNO. Such defense can be suppressed only by using nuclear weaponbut ... it is ruled out because it will immediately lead to a global nuclear conflict, in which there will simply be no winners. That is, today tanks cannot defend the defense of the Western allies in Europe through forests and fields. Well, and the roads, as you can easily see, are easy to make impassable, and even turn them into traps for vehicles that hit them. 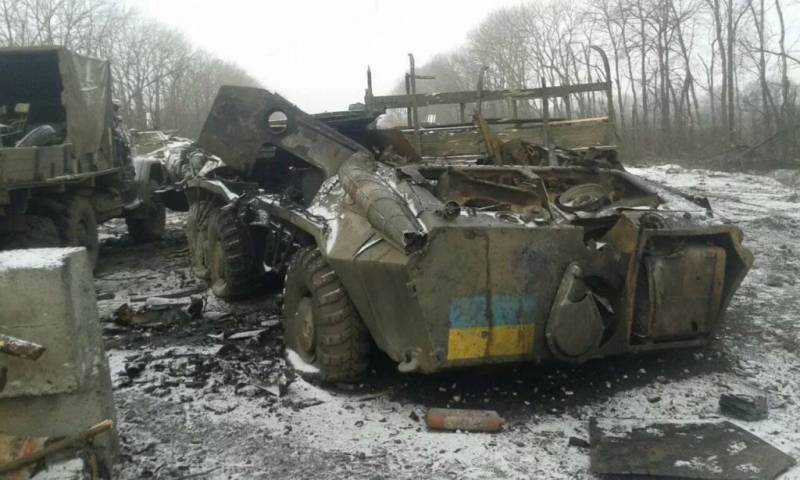 So, striking in the European theater of war both in the central (Poland, Germany, France) and the south (Poland, Austria, Italy, France, and then Spain still lies there, and the road to them lies through the Pyrenees), care should be taken to ensure that our equipment moves ... along the highway and at maximum speed, and so that the adversaries crossing their bridges cannot undermine. And here again, an interesting question arises: are they mined right now or not? Because if mined, then all efforts to prevent their undermining are doomed to failure. If not, then ... the attack of tanks and infantry fighting vehicles on highways should be preceded by a raid of air assault helicopters to the entire depth of the operation, even if it will be several thousand kilometers. Many bridges, many helicopters and many landing groups. All of them should be landed near bridges and tunnels with at least 10 people, equipped with supplies of food, ammunition and communications. 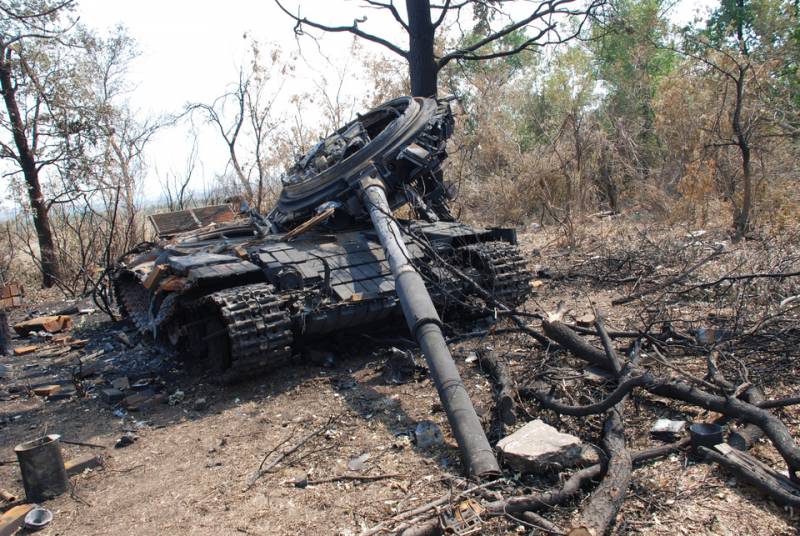 Damaged tank in the forest. Dynamoreactive armor didn’t help him either.

The task of these groups is simple: to prevent the destruction of the bridge and keep it until the approach of our military units! They should be equipped with air defense systems, ATGMs, grenade launchers and machine guns. Combat helicopters must be assigned to the groups, taking off as soon as a request for fire support comes from one or another group. That is, again, there should be many such helicopters. And the actions of the landing groups and the helicopters supporting them must be rehearsed in advance during the maneuvers. 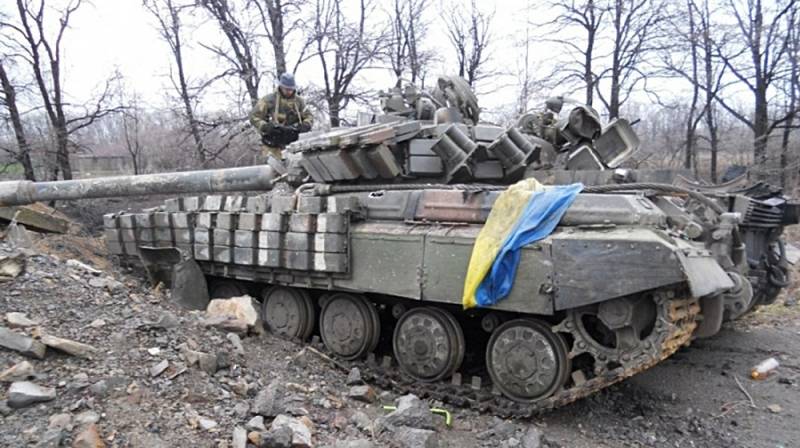 As you can see, the task of both a “preemptive” and a preventive strike by Russian troops on a modern European theater of operations is a task of exceptional complexity. Without a doubt, our military experts have all this in mind, at least they should have, well, at least as the very visionary and very cautious Mr. Churchill. Because it was not without reason that there was a saying that the army is usually best prepared for the past war, but not for the one that it will need to lead now or in the future. I would very much like, given all the above, that these words would remain so with words! 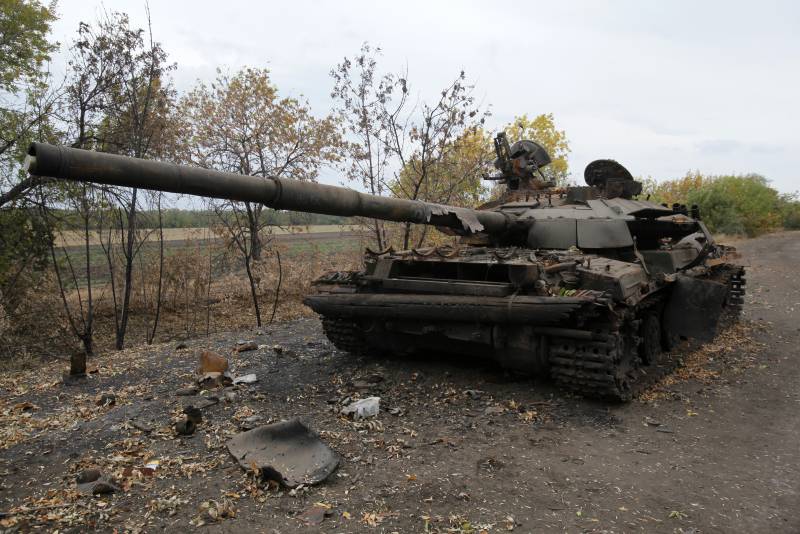 But it could be a highway to Warsaw or Berlin ...

Author:
Vyacheslav Shpakovsky
Articles from this series:
To the West and back on the bus. Roads, houses, bridges and operation "Unthinkable 2"

We are in Yandex Zen
About Stalin and Khrushchev
What you didn't want to know about England
202 comments
Information
Dear reader, to leave comments on the publication, you must to register.