New assault rifles and machine guns for the US Army

August 7 2019
105
Soon, the American army will abandon the traditional M4 automatic carbines and M249 light machine guns in favor of new models of small arms weapons. It is planned that the transfer of ground forces and the Marine Corps to new models of small arms will begin in the 2023 year. The main reason for rearmament is the transition to a new caliber of small arms. The U.S. Army abandons the 5,56 mm cartridge in favor of a promising 6,8 mm caliber ammunition. 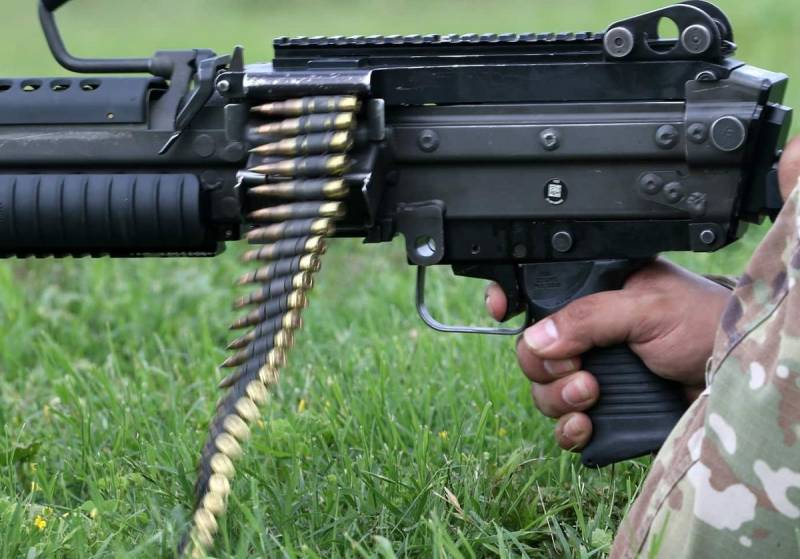 The first information about the tender, providing for the development of new models of small arms, appeared last fall. The preliminary task for the creation of a new small arms systems prototype competition within the framework of the 6,8 mm caliber cartridge was issued on October 4 of the year 2018. New American small arms are being developed as part of the NGSW's Next Generation Squad Weapons program.

It is worth noting that even during the military campaigns in Afghanistan and Iraq, the American military massively complained about the insufficient stopping effect of traditional cartridges of the caliber 5,56xNUMX mm NATO. This low-pulse intermediate cartridge was officially adopted by the NATO countries in the 45 years. Then the cartridge replaced the ammunition 1980x7,62 mm, which was often criticized as too powerful a cartridge for used and designed automatic rifles. Another problem was the excessive weight of such cartridges, which reduced wearable ammunition and limited the infantry's capabilities in the changing conditions of warfare.

According to Military.com, at present, the first prototypes of promising light machine guns under the 6,8 mm cartridge, which are being created as part of the adopted Next Generation Squad Weapons program, are already being tested in the United States at the Aberdeen training ground in Maryland. Brigadier General David Hodne, responsible for the implementation of the NGSW project, told the publication about the testing of new models of small arms. According to him, the replacement of the M4 automatic carbine and the M249 light machine gun should be fully ready by the first quarter of 2023. It was at this time that new items should begin to enter the arsenal of units of the American infantry. 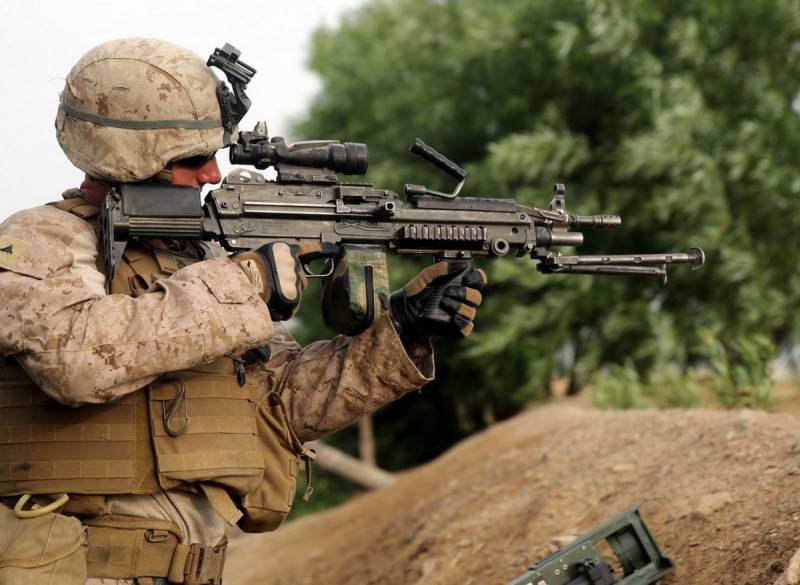 Earlier, the U.S. Army Command of Advanced Development and research centers of the U.S. Armed Forces came to the conclusion that the 5,56X45 mm cartridge in the arsenal of the American army is no longer effective against modern defenses that are in the arsenal of countries that are potential opponents of Washington. In addition to the low penetration ability of the bullet and insufficient stopping power, the ammunition of the caliber 5,56 mm is notable for a significant loss of lethal force when firing at long distances. All of this combined led the Americans to turn their attention to a new version of the 6,8 mm cartridge, which will become the main one for promising small arms systems.

The new ammunition is intermediate between the cartridges of caliber 7,62x51 and 5,56x45 mm. At the same time, the new ammunition will retain all the best characteristics of a heavier cartridge of 7,62 mm caliber, while remaining lighter than it. At least 10 percent is expected. Considering that every gram of excess weight is important for a fighter, this is not so bad. In addition, the sleeve of the new cartridge is planned to be made without the use of brass. Two main options are considered: a special composition of steel or a special polymer. In addition to the possibility of creating liners from polymers in the United States, they are also working on telescopic ammunition, which also reduces the weight of the cartridge.

Earlier in the USA, the 6,8x43 mm Remington SPC cartridge was already developed. Ammunition has good ballistics and lethal force, while its size and recoil remain moderate. This cartridge was developed by Remington together with the US Army since 2002 year. The official presentation of the cartridge took place in 2004 year. The kinetic energy of the bullet at the time of the shot for the Remington SPC cartridge is 2430 J, this is 1,4 times more than that of an ammunition of the caliber 5,56x45 mm. The mass of the bullet 6,8 mm cartridge is 7,45 grams, versus 4 grams for the cartridge 5,56x45mm. It will be unknown whether the ammunition reserve for these cartridges will be used to create new ammunition of the 6,8 mm caliber. 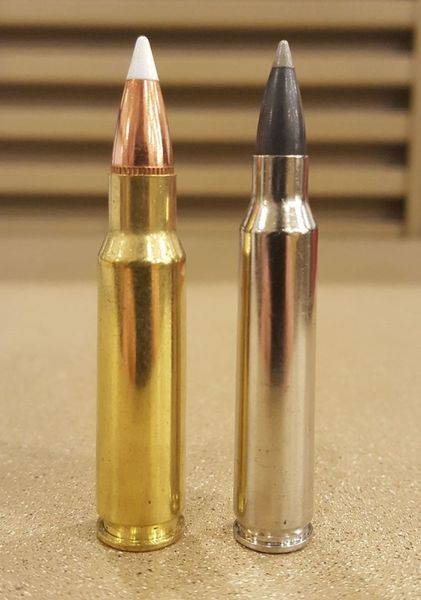 It is assumed that not one of the existing body armor can resist the new cartridge of the 6,8 mm caliber. For the United States, this is especially important and is one of the reasons for the transition to a new caliber. Following the American army, other armies of the world also acquired their own modern combat equipment options, primarily the PRC and Russia. New protective kits, including modern body armor, Kevlar helmets and other military protection elements, turned out to be a tough nut for small-caliber small-caliber ammunition. At the same time, both the PLA and the Armed Forces of the Russian Federation are already working on the creation of improved protective equipment for their own military personnel. So in February of 2019, information appeared that Russian units of the Airborne Forces and ground forces were expecting new versions of body armor from the 2 Warrior combat gear complex. According to the creators of the bulletproof vest, he is able to withstand the hit of a bullet fired from a sniper rifle from a distance of only 10 meters. In such circumstances, the desire of the US military to switch to the caliber 6,8 mm, which is suitable for combat at short, medium and long distances, seems to be fully justified. Experts already call this solution quite promising.

Other features of promising weapons

The US military declares one of the main goals of the entire program “Small Arms of a New Generation Branch” to reduce the total weight of weapons and ammunition. That is why designers today are considering innovative solutions for cartridges, which include the creation of a sleeve of polymer materials and the development of telescopic munitions. The aim of all developments is to obtain a cartridge of a smaller mass, but with the preservation of all the required damaging characteristics.

It is also known that the US military leadership requested developers to present models of promising small arms with rechargeable and non-rechargeable batteries for an advanced fire control system. The weapon becomes more complex and more and more resembles the systems that are implemented today on wheeled and tracked military equipment. According to the plan of the US military, the new aiming system can be a real breakthrough, providing the soldier with great striking ability. In this case, the battery will be directly integrated into the design of the automatic rifle. 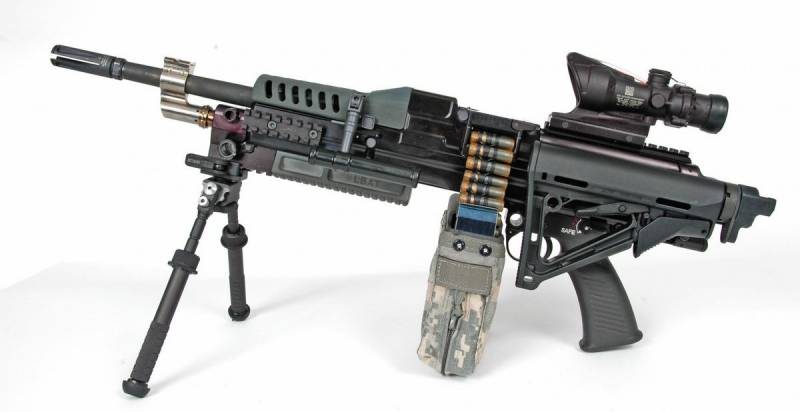 One of the prototypes of a machine gun under the cartridge 6,8 mm from AAI Corporation

It is assumed that a promising fire control system will appear as a combination of well and long-known devices combined in one accessory, the mass of which should not exceed one kilogram. It is expected that the device will include a ballistic computer, a laser rangefinder, a set of atmospheric sensors and an optical sight adjustment system. With the help of digital tools, each fighter can easily customize the weapon to his needs, taking into account the weather situation and the firing range. This development is only the first step in the development of samples of small arms. In the future, Americans expect to integrate all of the above devices into night vision devices.

According to the American thematic publication Jane's Defense Weekly, a preliminary task issued in October last year to create new small arms concepts under a new cartridge most likely canceled preliminary contract agreements from June 25 to 2018. Although possible, this is only an addition to the already issued contracts. One way or another, previously six preliminary contractual agreements to create a replacement machine gun M249 were issued to companies: AAI Corporation (part of Textron Systems), FN America (two contractual agreements), General Dynamics-OTS, PCP Tactical and SIG Sauer. With a high degree of probability, the representatives of these companies are participating in the competition for the creation of the promising assault rifle NGSW-R and light machine gun NGSW-AR.

According to the latest information, 4 companies will submit their samples for testing, of which only three will be admitted to the next stage of selection. While we do not know the participants in the first tests, we only know that samples of automatic weapons of a new generation are already being tested. The results of this stage of the competition will be known by the end of the summer of 2019. After that, the three remaining companies will continue to improve the presented samples of small arms, as well as work to create new ammunition for them.

According to information published on the US government tenders website fedbizopps.gov, the three remaining companies will need to provide the military with 53 sample NGSW-R and 43 sample NGSW-AR, as well as 850 thousand cartridges of 6,8 mm caliber for the specified models of small arms. The gradual introduction and testing of prototypes in the troops is planned to begin by the 2021 year, so that by the 2023 year to begin the full re-equipment of infantry units. It is noted that the company, the winner of the competition for the creation of advanced models of automatic weapons, will receive an order for the manufacture of 250 thousand small arms and 150 million cartridges for them. It is also worth noting that the plans of the American army to switch to a new cartridge of the 6,8 mm caliber suggest the creation of a new production line for the production of cartridges. The new facility is due to appear at Lake City's Ammunition and Army Ammunition Plant in Independence, Missouri.