August 6 2019
225
Really important news often go unnoticed. They occur, no one notices them, but the events mentioned in this news often have consequences that later, having developed to a large scale, make observers gasp - and it’s good, if only out of surprise. 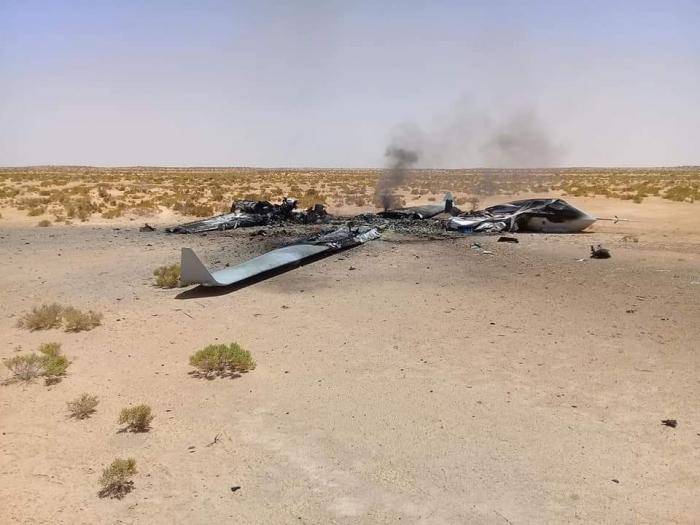 On 4 of August 2019 of the year one of these events occurred, mentioned in such news, but not noticed by anyone.

And no one noticed.

Turkey is not accepted in the ranks of the countries-innovators in military affairs. But it seems that they will be able to surprise the population of the planet in this century. The Turks took a powerful start as an industrial force, and any participant in military tenders in the Islamic world knows what strength they have already gained. The fact that it is the Turks who build skyscrapers in Russia is also no secret.

Recently, there have been rumors about Turkish plans to build a springboard aircraft carrier, similar in “ideology” to Vikramaditye or Kuznetsov. The Turks participated in the F-35 program precisely as a manufacturer of components and plan to create their own combat aircraft. But that's all for now.

But with combat lasers it turned out differently.

Turkey, preoccupied with achieving military superiority in the region, as well as gaining qualitative advantages in military power over Greece and Russia (and, apparently, also over Israel), has long and seriously invested in innovative systems weapons, including weapons based on new technical principles. As early as the beginning of the 2010's, the Turkish company SAVTAG demonstrated experimental samples of plants of different capacities, starting from 1,25 kW, and then to 50 kW. The systems were created in conjunction with TUBITAK, a state research institute. The Turks showed these systems as technology demonstrators, and did not particularly hide the fact that they plan to use these developments as weapons.

However, they managed to put all the observers on the wrong track - reports from both the Turkish Ministry of Defense press releases and the specialized press hinted that Turkish laser weapons would be primarily produced for the Navy, and in general, repeats the American work. Nobody was particularly interested then. Well, the Turks ... Well, they want lasers ... So what?

In 2015, TUBITAK announced that experimental lasers successfully hit targets. Then it became known that the program was funded - it turned out that the Turks were pouring a lot of money into laser weapons - only in 2015, 450 million US dollars were spent on the program. For a country that has access to all Western technologies and already saves a lot of money on R&D, this was a very impressive amount. And, one must understand that other years did not differ much from 2015. Nevertheless, experts of most countries of the world Turkish progress, as they say, slammed.

In the same year, it became known that the Aselsan holding, the largest Turkish military-industrial corporation, took the Turkish laser weapons program “under the wing”.

On 7 on July 2018, the company issued a press release stating that it had successfully tested a combat laser capable of hitting small-sized UAVs from 500 meters, as well as destroying explosive devices from 200 meters. The compact laser gun was installed on the Turkish Otokar Cobra armored car, and, most importantly, was equipped with a guidance system that allows you to continuously hold the laser marker on target.

Laser power cannot be compared with any kinetic ammunition. It is insignificant. A projectile from an 76-mm cannon gives the target such energy that the laser can tell the target only by heating a single point for a very long time and continuously. And this is exactly what the specialists in optoelectronic systems from Aselsan achieved. Their gun could “cling” to a specific point on the target and “warm” it until it was completely destroyed. Even if the target was moving.

And that all changed. 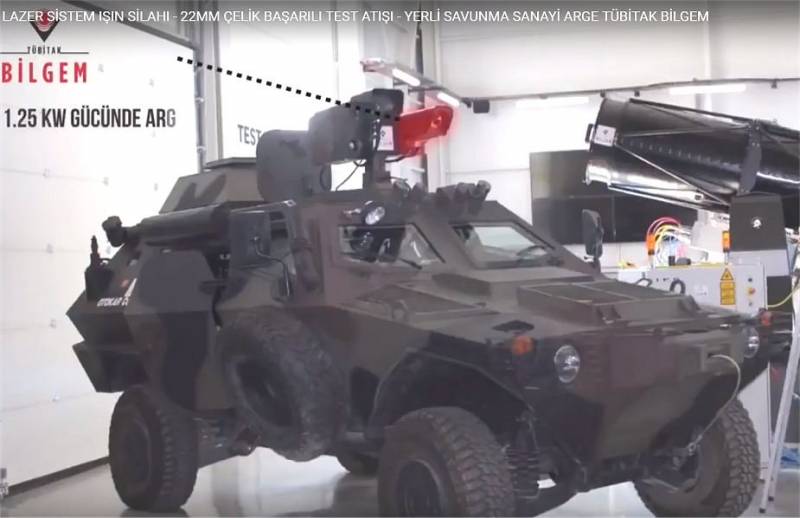 "Cobra" armed with a laser gun mount from Aselsan

In a press release, Aselsan emphasized that she was able to achieve reliable target tracking, continuous laser operation and an extremely low shooting cost. The latter is obvious. Where a conventional cannon spends a projectile that doesn’t have to hit the target at all, a low-power laser gun requires only diesel fuel for the generator.

The company showed a photo of a machine armed with a laser, and a video presentation showing the results of firing at metal plates.

Sensation, however, did not happen, and the news in the world was met quite calmly. No less calmly, the Turks continued to work on laser weapons. They knew that the most interesting press releases about their products were yet to come.

The ongoing war in Libya did not go as Recep Tayyip Erdogan would have liked: the Islamists on whom he put lose. This problem did not arise yesterday, and the Turks have been opposing the Libyan National Army of Khalifa Haftar for quite some time. The latter has the support of a wide variety of countries and forces - from Saudi Arabia and the USA to Russia and France. Russian mercenaries and pilot mercenaries Eric Prince, the founder of Blackwater, are working at Haftar. MiG-23, specially repaired for his Air Force, are being brought from Haftar to Russia, and from the UAE are the “Shell” air defense system for protection against air strikes. And Haftar is slowly but surely winning.

And Erdogan again, as elsewhere, set the wrong horse. As in Syria, as in Egypt, in Libya, those forces that Turkey regarded as friendly and relied on failed. True, in Libya, the Turks are still counting on something. Turkey continues to support the so-called “government” and its friendly Misurat groups. Turkey supplied and is delivering heavy weapons to these groups, sending advisers and instructors. Seeing that this was not enough, the Turks began to transfer to Libya the militants previously employed in the Idlib province in Syria. We will not delve into the course of this distant war from us, something else is important to us.

The synthesis of the need for Turkey to stop Haftar, on the one hand, and advanced high-tech weapons, which have no world analogues without discounts, on the other, should have happened sooner or later. And he happened.

For operators of the UAE-owned UAV Wing Loong II, a Chinese-made aircraft, this was an ordinary reconnaissance and combat mission. Their drone armed with an anti-tank missile barraged over the Misurata area, conducting reconnaissance in the interests of Haftar’s troops and looking for targets that could be destroyed by a direct attack. The war in Libya has long taken the form of a bizarre mixture of the actions of irregular formations and weapons, created on the basis of the most advanced technologies, and UAVs were one of the symbols of such a mixture. The departure, however, ended with the UAV being shot down.

And soon the world flew around the photo. 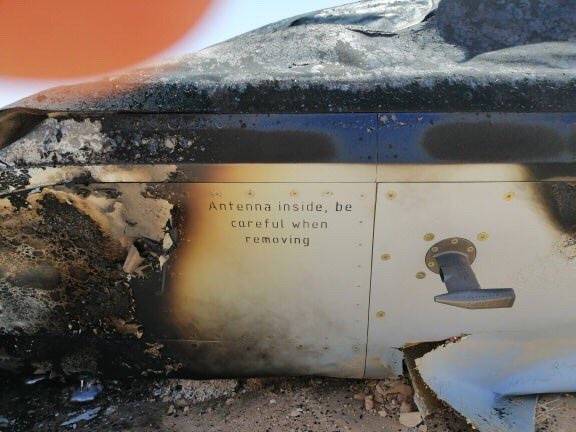 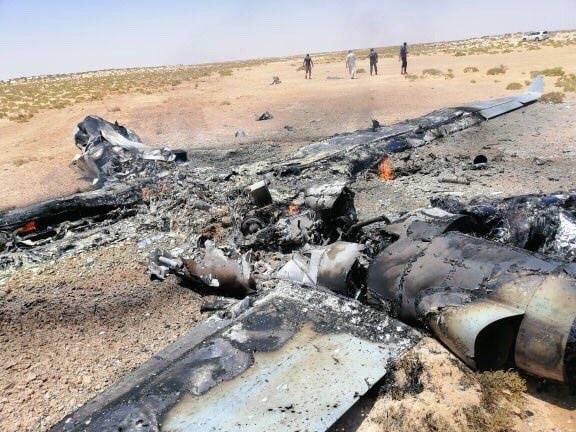 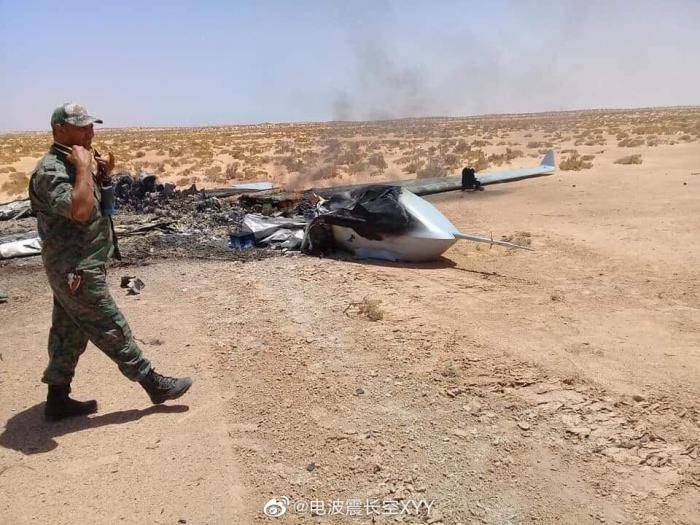 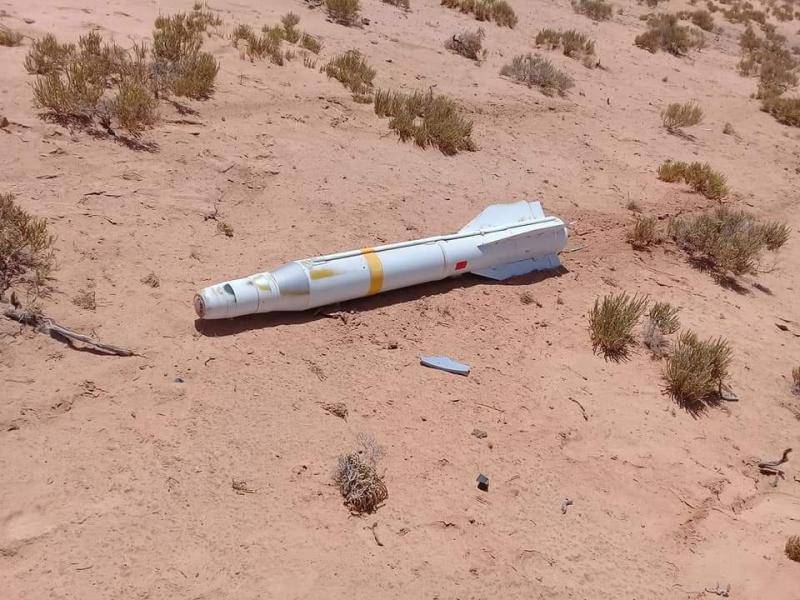 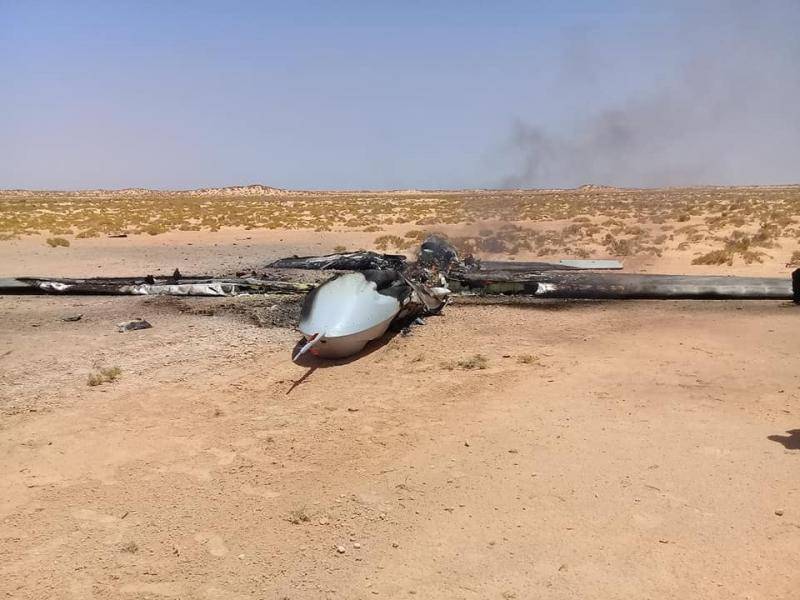 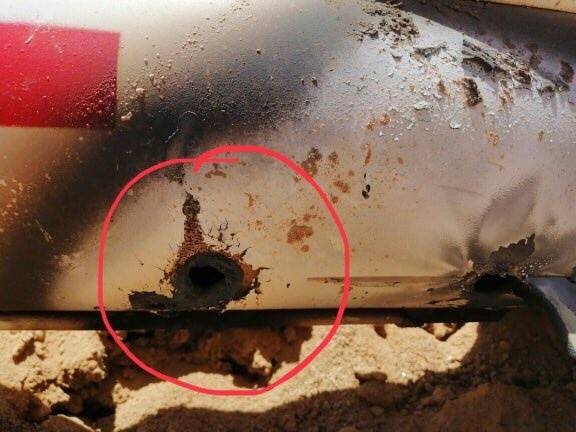 The burn that destroyed the UAV

The details immediately became known. The Turkish installation, which shot down the UAV, is mounted on the chassis of an off-road armored car. Like the earlier Aselsan model, it is equipped with a Turkish-made optoelectronic guidance system. The system allows you to accurately inspect the target for firing, to select a vulnerable point, and then hold the laser marker on this point until the target is completely destroyed. Also, as with the previously demonstrated laser gun, a continuous radiation mode is provided, without long interruptions to the "pumping" of the laser. Gun power - 50 kW. This is so far the most powerful combat laser in the Turkish ground combat vehicle. 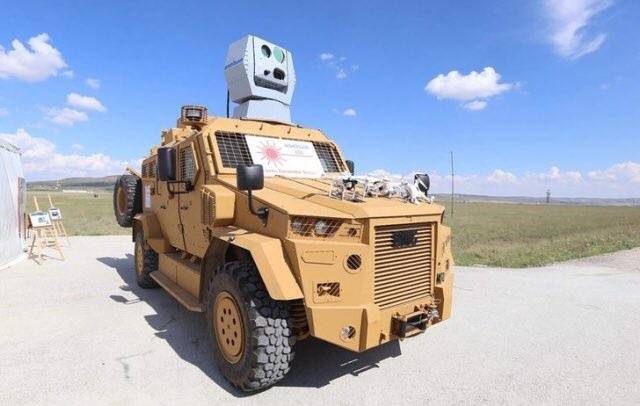 "Laser combat vehicle", so to speak. The same applies now in Libya

An important point is not an experimental setup. This is a fully functional combat vehicle armed with a laser gun. And she had just been tested in battle, and not at all against the "commercial" drone with E-bay. Such a gun could well bring down an unarmored helicopter, and easily. And Turkey can build such weapons in large quantities without any problems - now. And this is a tactical weapon, it does not need any special transportation conditions, a laser-armed combat vehicle has the same level of mobility as any other armored car of the same type. Ordinary soldiers, including conscripts, may well use these weapons. And the cost of firing this gun in the literal sense of the word is equal to the price of diesel fuel spent during the shooting. Let's just say, an unarmored helicopter takes about twenty-five rubles, approximately.

Will this episode be the start of a "laser weapon race"? Let's make a prediction: no, it won't. The epoch-making news, as they say, did not thunder. Well, who are the Turks in the world of war industry, right?

The Turks will continue to improve their weapons, and no one will pay attention to them. And so it will be until, in some other war, Turkish laser cannons on armored personnel carriers and tanks they will not massively burn out optical-electronic sights of enemy equipment, burn engines to unarmored vehicles, shoot down helicopters and UAVs, disable aircraft standing on the ground from a long distance, mow down infantry without noise and external unmasking signs. And then everyone will shudder ...

Entertaining in all this stories is how essentially beginners in the laser topic occupy that niche in which the "grandees" of laser business, such as Russia and the USA, do not even think to climb. They occupy successfully and very quickly, building already practically serial military equipment faster than their competitors in the world read news about it - literally. This is all the more surprising because both Russia and the United States are superior to the Turks in laser technology and, in theory, should “attack with the threat of loss of advantage” - work ahead of the curve. There is something touched, and incomparable with Turkish, and there is some experience, we still have from Afghanistan. And a much more complex set for much more complex tasks, “Relight”, is already in operation in Russia. And the United States has a “working” ship installation. In a single, however, instance.

But ground-based combat vehicles with tactical-level lasers are not being built and used in Russia or the United States. This is done by the Turks, and the transition of the quantity of their work to the quality of technology as a whole to a new level is a matter of the very near future. They will grow the faster the greater their combat experience. As well as not far off “acquaintance” of the enemies of Turkey with what a combat laser is in its own skin - in the truest sense of this expression. In the future laser arms race, the Turks have already claimed a prize for themselves, and it is not a fact that this place will not be the first in the end.