August 6 2019
65
In recent years, the Pentagon has been focusing on hypersonic issues. weapons different classes, including those intended for the air force. Since last year, one of such projects has been under development, and in early summer its first results became known. The promising Lockheed Martin AGM-183A ARRW airborne hypersonic ballistic missile already exists as separate products used in some trials. 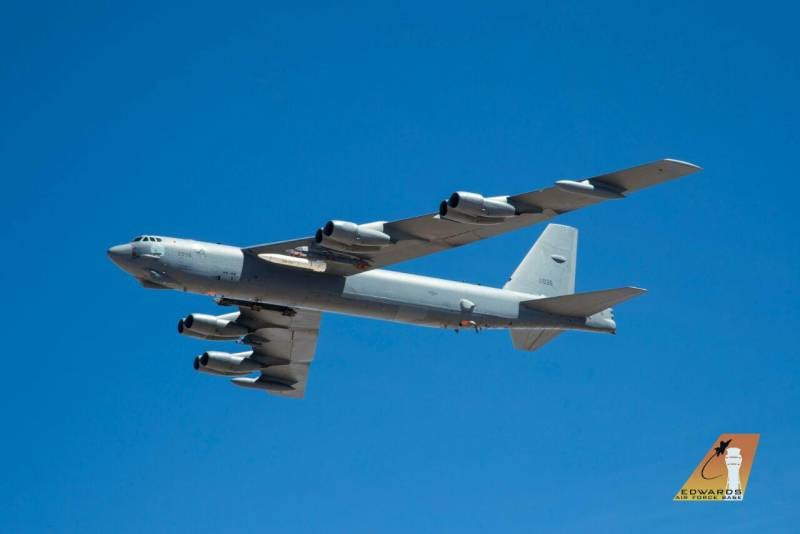 What is known about the project

Product development AGM-183A started about a year ago. 13 August 2018 Lockheed Martin Missiles & Fire Control received a contract worth 480 million dollars, the purpose of which is to create a new aeroballistic missile for the Air Force. The new project is designated as Air-Launched Rapid Response Weapon ("Air-based Rapid Response Weapons") or ARRW.

A little more than three years are allotted for work on ARRW. AGM-183A series products are expected until the end of 2021. With their help, the Air Force plans to strengthen strategic aviation, expanding its combat capabilities. Aeroballistic missiles with high flight characteristics will have to increase the effectiveness of air strikes in comparison with current weapons.

The Pentagon and Lockheed Martin are in no hurry to share all the details of the work, however, they publish some reports. So, from official news it is known that on June 12 the first flight of a prototype ARRW rocket on a carrier aircraft took place. A test flight was held at Edwards Air Base. The official press release was accompanied by several interesting photographs.

The prototype AGM-183A has the dimensions and mass corresponding to the future combat product. He received part of the control systems, and the remaining units were replaced by weight simulators. The missile was hung under the wing of a B-52H bomber, which performed a flight according to a given program. Reset of the prototype was not performed. The purpose of the tests was to test the behavior of the rocket on the external load. When will the new tests take place, incl. with reset and flight - not reported.

What is known about the rocket

A number of technical details and characteristics of the new rocket have not been officially published, which contributes to the emergence of various estimates and assumptions. At the same time, some important details of the project are known. All this does not yet allow us to draw up a sufficiently detailed and plausible picture, but in the future the situation should change.

The AGM-183A is an aeroballistic missile with a possibly detachable warhead. She received a cylindrical body with a conical head fairing and folding stabilizers in the tail. As the head part, it is proposed to use the planning tactical block Tactical Boost Glide, developed in DARPA. Acceleration of the block to the required speeds is provided by the solid-propellant rocket engine. 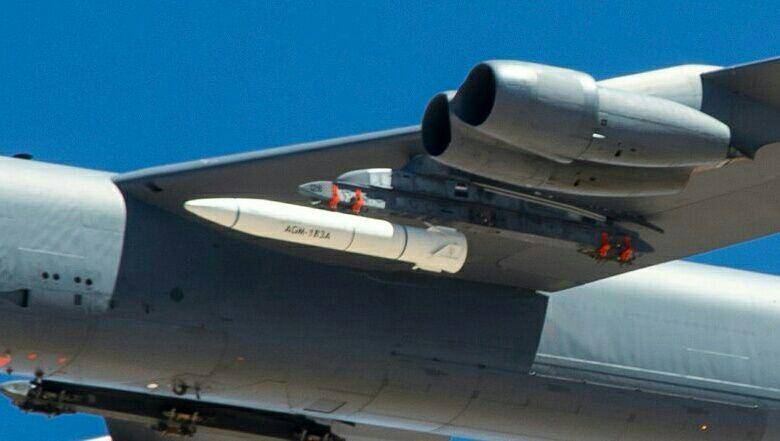 According to various estimates, the rocket has a length of the order of 6-6,5 m with a case diameter of approx. 1 m. Launching mass must exceed 2 t. The bulk of the flight performance of ARRW remains unknown. Only the firing range to 800 km was reported. You can also talk about a ballistic flight profile with characteristic features due to the use of the TBG combat unit.

A prototype for transportation to the B-52H was said to have received some of the on-board equipment. Probably, a full-fledged AGM-183A rocket will be equipped with an inertial and satellite navigation system, ensuring its passage along the necessary trajectory. Similar equipment should have a combat unit. At the same time, his autopilot will have to provide maneuvering in flight.

The estimated and actual flight performance of the entire ARRW system remains unknown. There is also a lack of clarity with the parameters of its key element - the TBG block. So far, only the total firing range in 800 km is called, while other parameters of the ballistic trajectory are not specified.

The alleged combat qualities of the rocket remain unknown. Earlier it was reported that the TBG combat unit will be able to reach speeds of M = 20 and carry a nuclear or conventional warhead. It is also expected that he will be able to maneuver on the downward part of the trajectory before falling onto the target.

The lack of the bulk of the most interesting information does not yet allow a detailed picture. In addition, it provokes the emergence of critical versions. So, we can assume that the AGM-183A project provides for the creation of a “conventional” aeroballistic missile without fundamentally new and bold components, such as a hypersonic planning block. 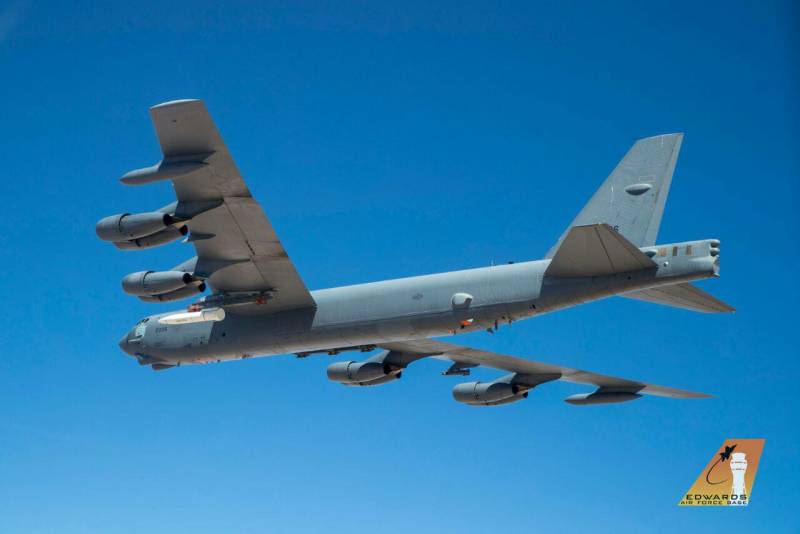 However, such an assumption contradicts the well-known Pentagon plans and the stated goals of the ARRW program. The result of the latter should be precisely a missile with a hypersonic warhead, and a different outcome is unlikely to suit the customer.

It must be recalled that the AGM-183A ARRW project is not the first American attempt to create an aeroballistic missile for strategic aviation. In the past, there have been several similar projects, but not one of them has left the test stage. How the next attempt will end is a big question. However, this time the Pentagon is determined to bring the project to the adoption of the missile into service.

The proposed version of an aeroballistic missile with a hypersonic warhead has a number of important advantages that can give strategic aviation new opportunities. As a result, the ARRW project has a high priority and should be brought to the desired result. In addition, it must be remembered that similar systems are already being created or put into service abroad - there has been a slight lag, and the United States is in an uncomfortable position to catch up.

The AGM-183A is an air-based ballistic missile delivered to the launch point by a long-range bomber. Using the B-52H aircraft allows you to get a combat radius of thousands of kilometers and ensure the destruction of targets almost anywhere in the world. At the same time, one B-52H will be able to carry several such missiles - although during the tests they have so far limited themselves to the removal of one prototype.

The launch of a “conventional” combat unit along a ballistic trajectory over a range of up to 800 km currently does not guarantee the breakthrough of enemy air defense and missile defense. The problem of breaking through the defense is proposed to be solved with the help of a hypersonic planning warhead. It is expected that the TBG product will have all the advantages inherent in hypersonic weapons, and will be able to effectively pass through any defense system. High speed will reduce the allowable reaction time for air defense and missile defense, and the ability to maneuver will make it difficult to intercept.

According to some reports, the TBG unit will be able to carry both special and conventional warheads. This in a known way will expand the range of tasks. 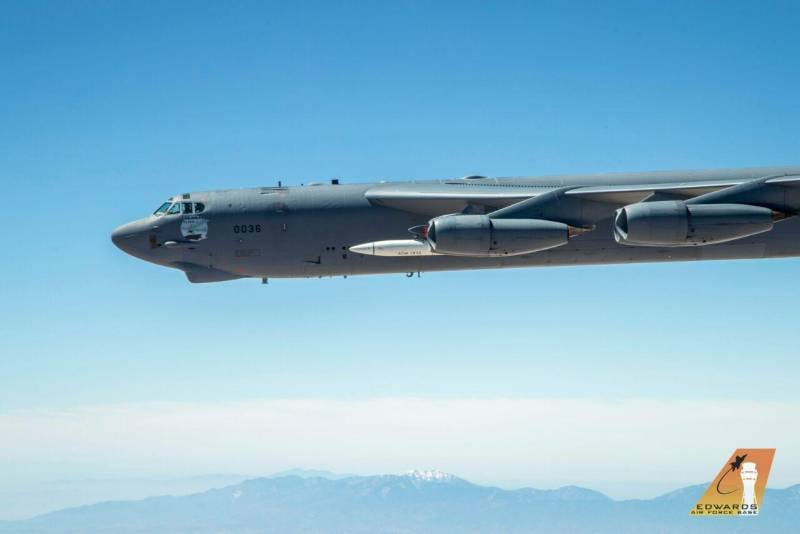 According to the name of the program, the AGM-183A missile should become a means to strike back in the shortest possible time. It is likely that such weapons are planned to be used to destroy important enemy targets along with other strategic missile systems.

Last year’s contract provides for the completion of work on ARRW before the end of 2021, after which the US Air Force will be able to begin full-fledged operation of new weapons. It’s too early to say whether the Pentagon will be able to fulfill its plans on time. To date, the AGM-183A project has only reached the export of a prototype and has not yet reached the testing stage. On the other hand, from the signing of the contract to the first flight with the layout, only 10 months have passed. Lockheed Martin still has a substantial margin of time sufficient to create and test the required weapons.

It should be borne in mind that the success of the ARRW program depends not only on the AGM-183A missile itself. A key element of the project is the TBG hypersonic warhead, which has been underway for several years. According to foreign press reports, in the early spring of this year, the TBG product entered the first flight tests, but it is still far from full-fledged flights in operating modes.

Thus, in the absence of any difficulties in the two promising projects of the US Air Force in the foreseeable future, they can indeed receive a fundamentally new weapon with high technical and combat characteristics. However, difficulties in creating a TBG or AGM-183A can lead to unpleasant consequences in the form of a delay in the adoption of missiles into service or even abandonment of the entire program.

Obviously, the ARRW project is now being monitored not only in the United States. A promising American missile can become a real threat to third countries, and therefore requires an appropriate response. It should be expected that by the time the AGM-183A is adopted for service, potential US adversaries will have at least working ideas on how to deal with such missiles. The US Air Force wants to complete work on new weapons before the end of 2021, and third countries still have a margin of time for an answer.

To date, in the field of hypersonic weapons, the United States has been in the position of catching up. They are currently developing similar projects, while foreign countries are already adopting such systems. The ARRW program, as well as other modern projects, should change this state of affairs. Whether it will be able to reduce the gap or even become a leader with its help will become clear in the coming years.