Tanks of Ukraine: present and future

August 5 2019
92
On the Ukrainian Internet resource "Apostrof" appeared an interview with the director of the Kharkov plant named after Malysheva "Will there be a" tank of the future "in Ukraine: what kind of combat vehicles are created for the army", as it were, revealing the state and prospects of Ukrainian tank building. The interview described the “new products” of the Ukrainian military-industrial complex, the T-64BM Bulat, T-84U Oplot tanks and the promising tank "Note". It should be noted that the interview is given by the director of the plant, which is far from developing tanks and their characteristics, like any director, he has only one task: to mass-produce what is ordered to him. The development of the tank is KB them. Morozov, and it determines the appearance, characteristics of tanks and prospects for their development. Therefore, the opinion of the director of the plant should be treated with caution, he simply does not know and does not understand many things, and gives out the wishful thinking. 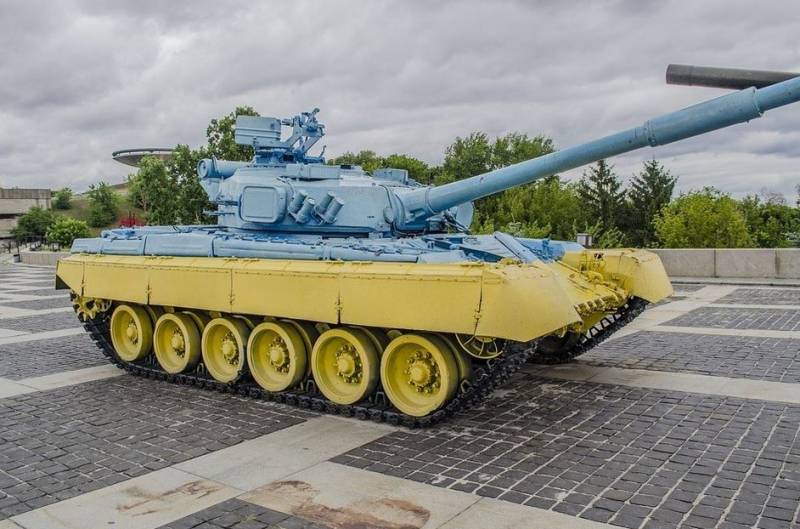 The article describes the state and prospects of Ukrainian tank construction in rainbow colors. At one time, I had to develop prototypes of today's Ukrainian tanks, and I have a good idea of ​​what characteristics and capabilities they have. I can immediately say that these tanks had an excellent Soviet past, now the deplorable Ukrainian present and the future will be the same.

How did the T-84 tank appear

Consider what these tanks are. The T-84 tank is a complete copy of the Soviet production T-80UD tank. This is the last modification of the T-80U tank, adopted for service in the 1984 year. In accordance with the draft government decree prepared in 1990, all tank plants were to gradually move to the production of this tank, but the Union collapsed and this was not implemented. The tank was mass-produced at the plant. Malysheva until the 1992 year.

The T-84 tank appeared in 1996 when Ukraine entered into a contract with Pakistan for the supply of 320 tanks. Under this contract, the T-80UD was renamed due to the fact that the task was to transfer the entire Russian configuration of the tank to Ukrainian. This problem was solved, and deliveries to Pakistan mainly came with Ukrainian equipment.

Ukraine was not able to independently produce this tank, most of the components were supplied from Russia. This was especially true of guns and sighting systems, without which the tank could not be released. Several accidents helped to realize a closed tank production cycle in Ukraine.

No one has ever been involved in the development and production of cannons of any caliber in Ukraine, but in KHKBM there was a full set of documentation for the 2A46M gun. The breech of the gun was reproduced by the plant to them. Malysheva. For the production of trunks, special equipment and technology was needed, which was not there. They found equipment at several Ukrainian enterprises and commissioned them to organize the production of trunks. It was impossible to do this without technology, the most interesting thing is that the technology was transferred from the Perm Cannon Plant. Moreover, the specialists of this plant were sent to Ukraine for a special fee, and with their help the production of barrels was now organized for the Ukrainian gun KBA-3. So Russia with its own hands has grown a competitor in the production of guns in Ukraine.

There was no documentation for the Reflex missile in Ukraine; the Yuzhnoye Design Bureau made an attempt to develop such a missile, but they were engaged in very large missiles and could not develop such a "small" one. This work was entrusted to the Kiev design bureau Luch, which had previously taken part in the development of aircraft missiles. Having already had the documentation and production of the Reflex rocket laser guidance channel, they have been trying to repeat this rocket for more than ten years and as a result have developed and launched the Combat rocket, which in its characteristics corresponds to the Reflex rocket. This rocket became the prototypes of a whole family of rockets produced in Ukraine for various types of military equipment.

All electronics, most of the documentation for which was also reproduced at Kharkov enterprises that produced electronics for the Soviet space-rocket complex. The gun’s hydraulic stabilizer was reproduced at the FED plant, which had excellent technology for the production of hydraulic machines for aviation.

As a result, the complete set of the tank was reproduced and put into production with the money of the Pakistani contract. So it was possible to repeat the Soviet T-80UD tank and pass it off as a new Ukrainian development of the T-84 tank.

In Ukraine, at the end of the 90's, a project was implemented to modernize the Soviet T-64BV tank, mass-produced in the 1976-1984 years, which received the Bulat T-64BM index. The modernization consisted in bringing its characteristics to the T-84 level, with the installation of the sighting system of the gunner “Irtysh”, the sighting system of the commander “Agat-S”, the replacement of the guided weapon system “Cobra” with “Reflex”, which have already received Ukrainian names and indices, a set dynamic protection "Knife", upgraded night sight gunner "Buran", installing an 5TDFM engine with 850 horsepower. or 6TD-1 power 1000 hp

At the beginning of the 2000, 10 of such tanks were modernized; the tank was never launched into mass production. With the outbreak of war in the Donbass, a small batch of T-64BV tanks was modernized, but it was no longer possible to massively upgrade tanks due to the collapse of tank production and lack of funding.

As if the new Ukrainian T-84U Oplot tank was developed in 2011 as a further development of the T-84 tank. It was distinguished by the installation of an 6TD-2Е engine with an output of 1200 hp, an auxiliary diesel power plant with an output of 10 kW, a welded turret, Duplet dynamic protection, a gunner’s thermal imaging sight with imported components, a commander’s panoramic sight with a laser rangefinder and a thermal imaging channel, a navigation system with a tablet displaying information working on GPS / GLONASS satellite navigation signals, an optoelectronic counteraction system based on the Soviet Blind system.

In total, one T-84U Oplot tank was launched. It was not possible to organize mass production due to the collapse of industry and the lack of funding. In the 2011 year, a contract was signed with Thailand for the supply of 49 of these tanks, which was hardly completed only in the 2018 year.

The T-84U Oplot tank at the level of the T-90СМ tank with the gunner’s sighting system Sosna U, a panorama of the commander of Falcon Eye and an 1130 horsepower engine.

Myths about the tank "Note"

The director of the plant tells some idle speculations about the promising Ukrainian tank Nota, not knowing and not understanding the essence of the problem. He says that the project of the Nota tank was still being developed in the Soviet Union with an uninhabited tower, the drawings were transferred to Moscow and the tank was repeated there, making the Armata. It’s hard to even come up with such nonsense; fairy tales are purely in the Ukrainian style.

I am a participant in the development of the last Soviet Boxer tank, which has nothing to do with Note. Work on the Boxer tank was discontinued in 1991 due to the collapse of the Union and the inability to conduct such complex and expensive developments in Ukraine. It was development work with the manufacture of several prototypes, but the design bureau was in another state and the work was canceled.

The Boxer tank was a classic layout with an inhabited tower and a semi-extended gun. The concept of the tank was well known in the Ministry of Defense, its project was considered and defended there with the participation of representatives of the Ministry of Defense, Kubinka, VNIITM, there was no secret for specialists, moreover, the development of many components and systems of the tank was carried out in Russia.

The documentation for the tank was not transferred to Moscow until 1995, at that time I was still working in the design bureau. Perhaps, during the implementation of the Pakistani contract, something could have been betrayed for help in its implementation, but there was no particular need for this, too much time passed. After the collapse of the Union, the project of the promising tank “Object 195” was developed at UVZ at the beginning of the 90's, it used many ideas, components and systems of the Boxer tank, 152-mm semi-remote gun, sighting systems, TIUS and a number of other systems developed for the tank Boxer by Russian enterprises. The difference was in an uninhabited tower and the placement of the crew in a capsule in the tank body. In 2009, this project was abandoned and the Armata project was launched with a different concept.

The mythical stories that a promising new tank is being developed in Ukraine can only be perceived as a joke. There are neither resources nor opportunities for this. The tank is developing not only a tank design bureau, but a mass of allies without which it cannot be created. There are no such allies in Ukraine today, there is global devastation in science and industry, what tanks are there!

At the end of the 90’s, the KGBM carried out search research work “Nota” to search for the concept of the tank of the future and nothing more. One of the participants in this project has already written on the Internet that they painted pictures of tanks, no one seriously worked on them, and moreover, the design of the tank and all its components and systems was not developed. This is done in any design bureau and even by amateurs, there is little sense in it. This work ended long ago with nothing, tanks create teams of specialists in various industries, and this is possible only in a strong and wealthy state, and not in a poor and crumbling Ukraine.

The tank building school in the KKBM is still preserved, but it went to the wrong state. Without serious economic, scientific and industrial power, nobody needs this. In Soviet times, masterpieces of tank building were created there. At the Soviet backlog in the 90, when industry had not yet collapsed, it was possible to maintain that level and upgrade tanks, achieving good performance. With today's devastation, it is impossible to even reproduce what was in the near future and this will be lost.

So far, you can still upgrade previously released tanks, bringing them to the level of T-84 (T-80UD), but this is not for long. There will soon be no one to produce components.

The T-84BM Bulat and T-84U Oplot tanks are not in the Ukrainian army for two reasons: firstly, it is impossible to establish their serial production due to the collapse of industry; secondly, Ukraine does not need such sophisticated tanks with high performance and cost in military operations in the Donbass, and therefore they are not in demand. Nobody will now let Ukraine into the foreign arms market; nobody needs a competitor there. In this regard, the prospects for Ukrainian tank construction are very deplorable.

We are in Yandex Zen
Armored vehicles of Ukraine: results, potential, prospects ...
The fire control devices of the Soviet and German tanks of the Second World War. Myths and Reality
92 comments
Information
Dear reader, to leave comments on the publication, you must to register.