Before the war. Intelligence information about the German group against KOVO

August 6 2019
39
In the previous parts, we examined intelligence materials (RM) about the enemy’s grouping, concentrated against the forces of PribOVO (Part 1 и Part 2) In accordance with the Republic of Moldova, on June 21, German troops were located at a sufficiently large distance from the Soviet-German border. 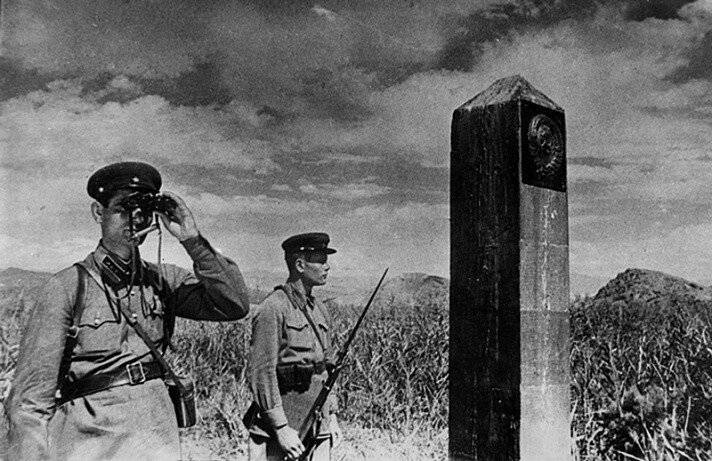 At the end of the topic about PribOVO, we consider a graph of the change in the number of groups, built according to the RM. It should be noted that in accordance with the Republic of Moldova received in the autumn of the 1940 of the year, the number of troops concentrated against PribOVO included also units located on the right flank of ZapOVO. 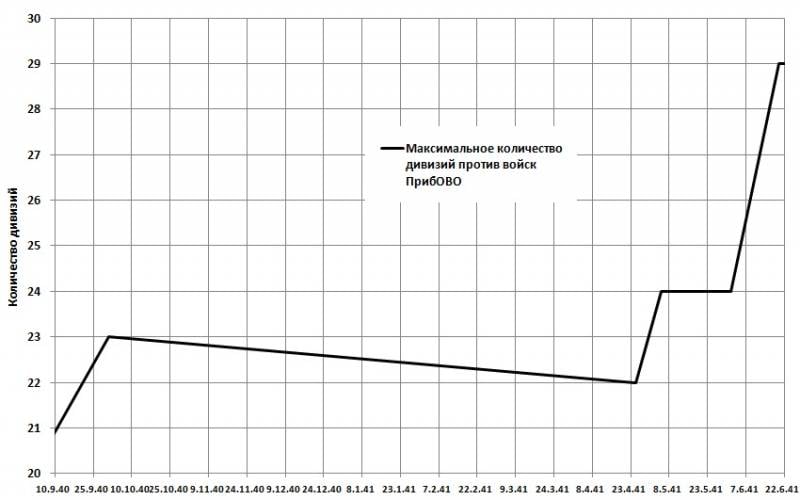 The German group did not take into account the 7 cavalry regiments that our intelligence "discovered". The indicated units will additionally comprise at least one more division ...

Consider the territories of neighboring countries, in which, in accordance with the RM, German formations were deployed against the KOVO troops. The zone of responsibility of the KOVO on the right passed along the line of Wlodawa (exclusively) - Demblin (lawsuit) - Radom (lawsuit), and on the left was limited to Art. Sticks. 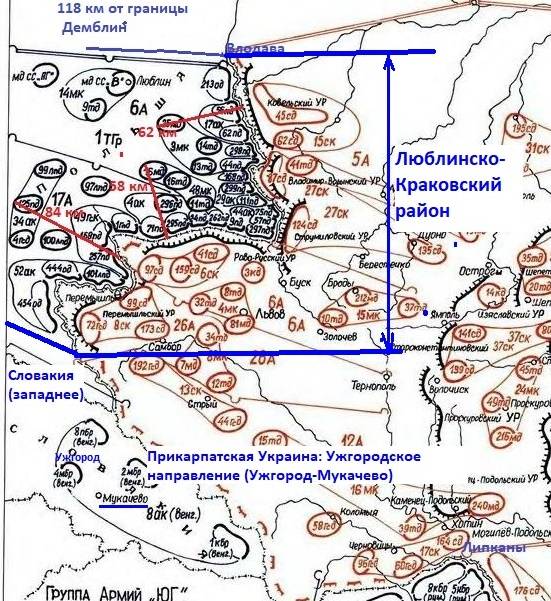 On the southern flank of the district, part of the Romanian troops are deployed.

Based on the RM in the figures, the dependences of the change in the number of German divisions in the above directions are plotted. 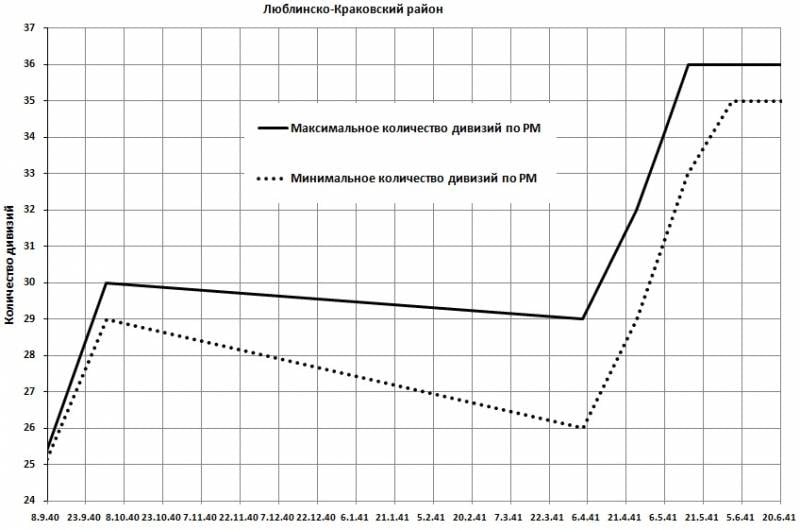 In accordance with the RM, from the beginning of April until mid-May there is an increase in the German group in the Lublin-Krakow region. The maximum number of German divisions has remained unchanged since 15.5.41! 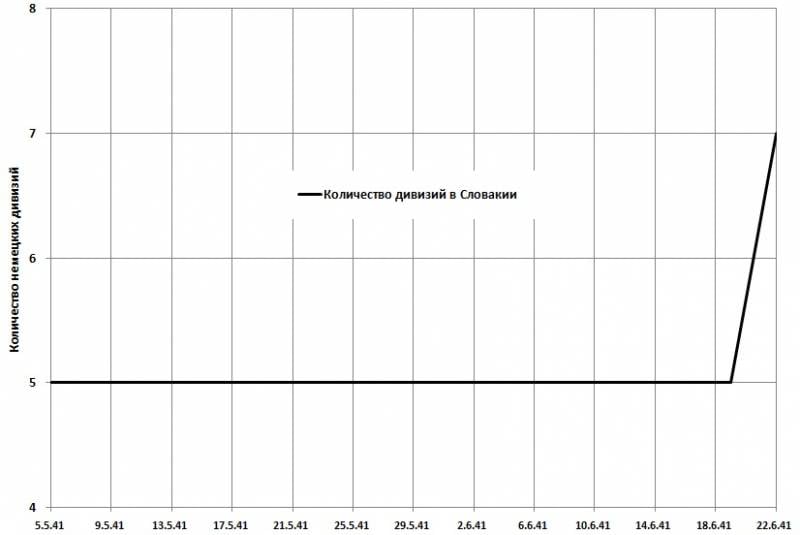 The number of German troops in Slovakia (in the Duplin region (57 km in a straight line from the border) - Presov (98 km) - Michalovce (67 km)) remains unchanged from the 5 of May 1941. The border area in this area is mountainous and, due to the limited number of roads in the direction of the border, the above-mentioned distances may increase significantly when troops are advanced.

In the figure, the increase to 7 divisions is related to their increase in the reconnaissance of the General Staff of the SC on 22-00 22.6.41. When it was during the period from 19 to 22 on June that reconnaissance "discovered" an increase in German divisions - it is not known ... 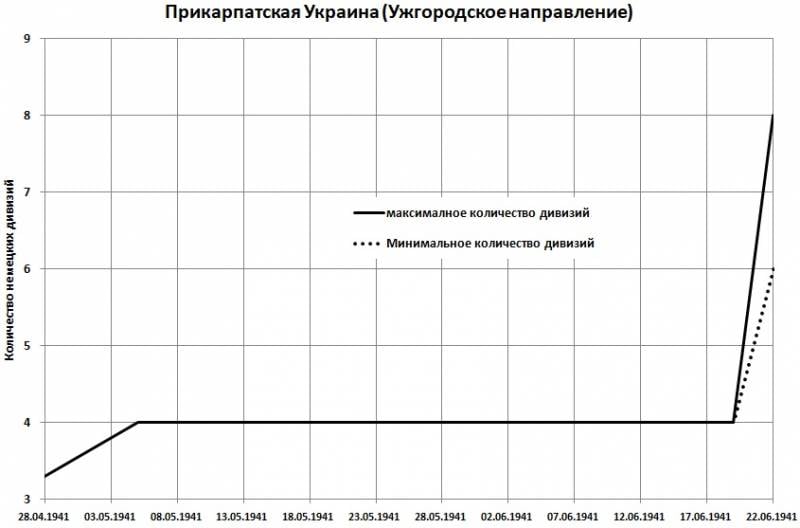 In preparing the material, the author examined two German maps, on which the situation with the deployment of troops on the eve of the 22.6.41 was plotted. Five German divisions in Slovakia (in the Duplin-Presov-Mikhalovce region) and four in the Carpathian Ukraine are missing on these maps ...

The presence of these nine divisions in the Republic of Moldova can only be explained by targeted German disinformation, when small units of German troops could pass as whole regiments or divisions. It may also be the result of misinformation by the special services of Germany, Hungary and Slovakia. In this case, the Hungarian and Slovak units were presented as German ... There is no other way to explain the constant mention in the RM in these areas of nine German divisions for a long period of time, which were not there ...

Thus, in accordance with the Republic of Moldova, from the beginning – mid-May to 19-20 on June 1941, the number of the German group against the KOVO troops practically did not change. With a high degree of probability, we can say that this number was also unchanged on June 21. However, this statement cannot be verified due to the lack of intelligence in the period from 20 to 21 on June ...

Data on the location of enemy troops on the KOVO map

Consider the situation on the eve of the war, which is printed on the map of the headquarters of the KOVO (SWF). 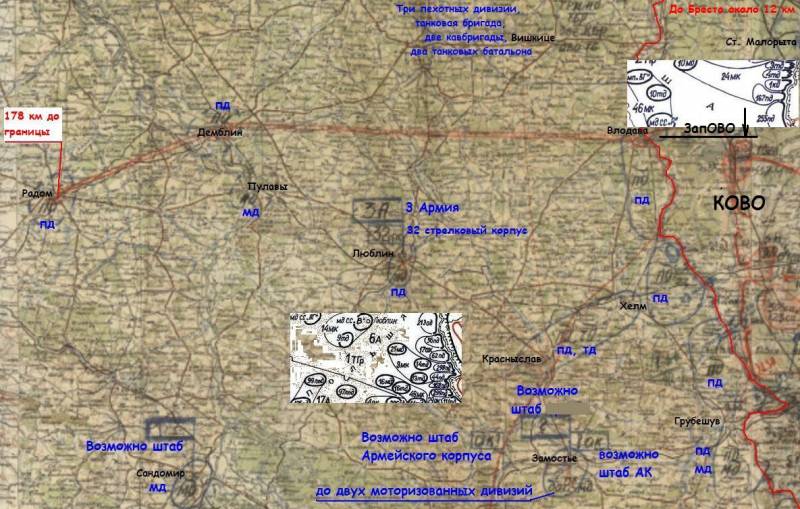 Above the line of differentiation of responsibility between ZapOVO and KOVO, we see information about the presence at the border of a group of three infantry divisions, two cavalry brigades, tank brigades and two tank battalions. The map shows the location zone of this grouping depth from 45 to 67 km from the border. Therefore, it cannot be argued that all of these troops were located directly at the border.

The tank brigade and two tank battalions can be identified as tank regiments of tank divisions.

With such an interpretation, the data presented on the map are fairly accurate RM ... The only major drawback is the failure to detect the 24 motorized body itself!

Of its composition, only the following were presumably discovered: tanks of two tank regiments (there were actually a regiment in each division), a cavalry and infantry division. No motorized rifle and artillery regiments of tank divisions, motorized reconnaissance, sapper and motorcycle battalions, as well as other divisions, were found. No motorized division found. Not found in depth 46-th motorized body.

Scattered two tank battalions and a tank brigade can only be:
- or attached to infantry divisions;
- or included in the mobile group of these parts and two cavalry brigades.

Two infantry divisions located along the line of demarcation of districts, 22 June were not there. It was not possible to establish whether they were there earlier.

Four infantry divisions and one motorized division are located directly at the KOVO border. Opposite them is the 15th Infantry Corps and units of the 87th Infantry Division. 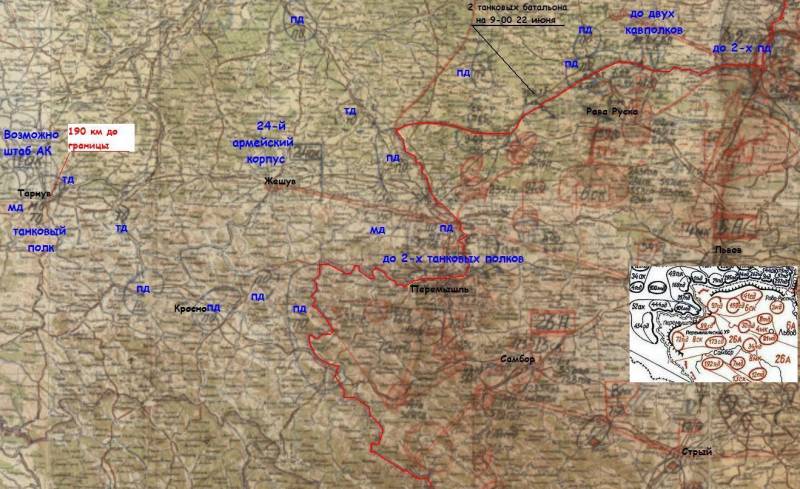 In the new drawing, there are more German troops at the border: up to 6 infantry divisions and up to two tank regiments. A little further there are three more infantry, and one tank and motorized divisions.

On the map fragment we see the concentration of small groups of infantry troops in the directions of Sokal - Krystnopol (up to 2 infantry divisions in the upper right corner of the map), Rawa Ruska (two divisions located one after another) and a small strike group from a motorized division, two tank regiments at Przemysl. To the right, this grouping is supported by one infantry division. Are these forces enough to start a full-scale war on June 22? Of course they are not enough ...

We can draw the following conclusions on the Republic of Moldova, available on the eve of the war at our headquarters, on the grouping of German troops concentrated in the Lublin-Krakow region:
- in accordance with the Republic of Moldova in the specified area there are 35-36 divisions. Therefore, it can be said that near the 21 division it is focused on moving away from the border;
- As part of a concentrated grouping, there is one army headquarters and four headquarters of army corps. Based on this, the headquarters of the KOVO and the General Staff could conclude that there were no large mobile groups in the area in the form of a tank army or motorized corps.

The figure shows a fairly large grouping of enemy troops: two army corps, about six divisions (of which up to 1,5 are tank). Another misinformation thrown to our intelligence. In fact, in this area near the border there was the 8th Army Corps consisting of four Hungarian brigades (up to two divisions). 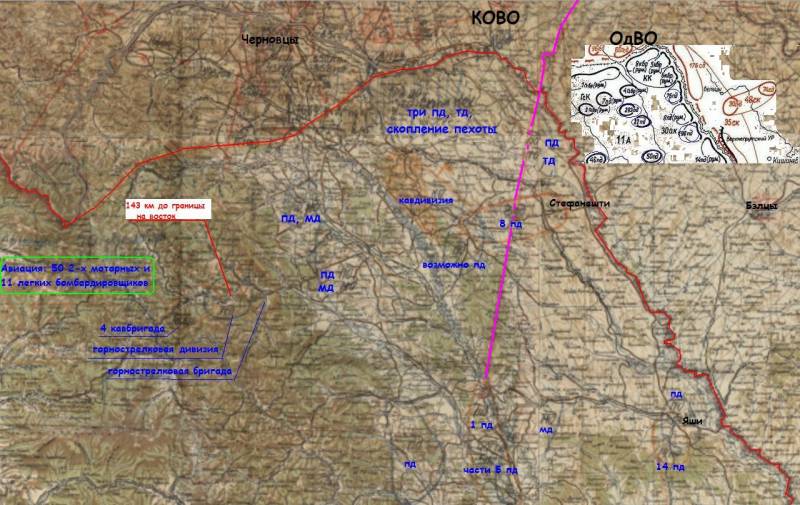 In the figure, the pink bar corresponds to the line of demarcation of KOVO and OdVO. More than six infantry, two motorized, tank, cavalry, mountain infantry divisions, cavalry and mountain infantry brigades are concentrated near the border with the KOVO. In total, up to 12 divisions, 8 of which are deployed quite far from the border. In fact, in this area there were up to five divisions of German and Romanian troops. One tank and two motorized divisions in the area have never been. Again, we see incorrect information that fell into the RM.

Summing up the consideration of the presented fragments of the map and the Republic of Moldova relating to the KOVO, it can be stated that the intelligence information and the actual deployment of enemy troops at the border are very different. Directly on the eve of the war, there are not enough enemy troops to start a war with the USSR. According to the author, information from the Republic of Moldova could not alarm the leadership of the spacecraft and the Soviet Union until the evening of June 21 on 1941.

The summary of the reconnaissance department of the KOVO headquarters of 20.6.41 refers to the movement of German troops to our borders, but the wrong conclusion is made: “... a major movement of all arms and transport south of Tomashov is pursuing some kind of demonstrative purpose or related to exercises... ». It is possible that such a conclusion led to the fact that the information in the report did not cause concern at the Intelligence Directorate and at the General Staff. There was no reaction ... There was also no reaction in Moscow even after the arrival in the morning of June 21 from the ZAPOVO of the alarm message about the advance of German troops to the Suvalka ledge.

Below is the data from Summary No.1 of the Reconnaissance Directorate of the General Staff of the spacecraft on 22: 00 on June 22. The figure shows three directions of German attacks on the troops of the district and analyzes the groupings of enemy troops discovered on June 22. Everything is the same as it was before the war: intelligence data diverge from the actual distribution of enemy forces. 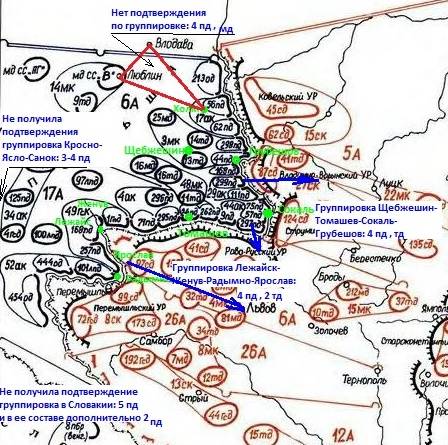 Rava-Russian-Lviv direction. At the Makhnov, Lyubych Krulevsk sector, in the direction of Rav Ruska, two infantry divisions, a cavalry regiment and a tank regiment advance. From the area of ​​Lubaczów Oleszyce, Stare Selo ... for 12 hours in the south, there were over infantry divisions supported by small tank divisions ...

Hungarian direction. The enemy in small parts tried to cross the border in the area of ​​Kereshmese, Vorokhta, attempts were repulsed.

Chernivtsi direction. ... Altogether, four Romanian infantry divisions operate on the Lipcani, Radauti section. The Germans are probably acting in this direction, since some of the captured prisoners turned out to be German soldiers ...

According to reconnaissance reports, mainly infantry divisions are supported by one armored division, tank and cavalry regiments, as well as small tank divisions. The only large mobile group found by intelligence in the Tarn area (two armored and motorized divisions, a tank regiment) is not recorded in the report and, therefore, has not yet been put into battle. It's not as serious as it really was ...

The information from the first SWF report is in good agreement with the situation on the map and the intelligence information that was reflected in other pre-war documents.

Information about incomplete data provided in the Republic of Moldova on the eve of the war is also reflected in the memoirs of war veterans. THEIR. Baghramyan (Chief of Operations, KOVO Headquarters):
... One infantry division is advancing in the Lyuboml area, one infantry and one tank division in the direction of Vladimir-Volynsky, and two more German infantry divisions to the south, to the very border with the 6 Army. Given that close to the border we had four rifle divisions, the situation, of course, didn’t seem so threatening...
It was not yet known that a German motorized corps surged from Sokal to Radziechow in a region free of our troops and that the same corps was trying to break through from Ustilug to Lutsk...

A.V. Vladimirsky (head of the operations department of the headquarters of the 5 Army):
The composition, numbering and location of the enemy’s formations by our intelligence were not revealed precisely and incompletely. So, before the 5 Army, the presence of only 15 enemy divisions was noted, including only two tank divisions. In reality, there was an 21 division, including five tank divisions. The concentration of the 1th Panzer Group in front of the 5th Army ... was not noted at all...

We saw that information about the concentration of German motorized corps against KOVO was absent in the RM as well as against PribOVO.

Author:
Eugene
Articles from this series:
On the eve of the Great Patriotic. Reports intelligence about the German group against the troops PribOVO