August 9 2019
123
100-year anniversary of the 1918-1920 genocide. 08.08.08 figures are almost mystical. As soon as you turn the figure eight by 90 degrees, an infinity sign will appear in front of us. The Caucasian wars really seem endless. In the 2008 year, the Georgian troops launched an operation against South Ossetia under the cynical name “Clean Field”. The very name of the operation was the quintessence of the whole desire of the nationalist-minded Georgian forces towards an independent neighbor. According to the Tbilisi plan, the land of South Ossetia should have been completely cleared of ethnic Ossetians. But back to a hundred years ago. 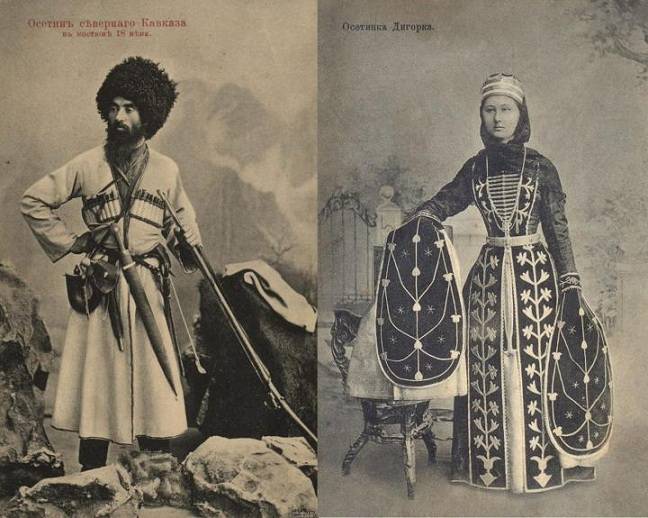 The origins of hatred

For a long time, Georgian princes tried to get Ossetians into serfs. And they hoped to do this in the Russian Empire with the hands of Russians. So, the princes Eristov-Ksansky repeatedly submitted their petitions claiming the Ossetian lands to the Russian command in the Caucasus. In 1831, after the next petition, the Caucasian governor Count Ivan Paskevich instructed the college assessors Kozachkovsky and Yanovsky to conduct a study of this petition, after which a corresponding note was drawn up:
“In gorges more distant, like those of Magrandolet, Tliy, Chapransky, Gvidisk, Knotsky and others, for which the Eristovs claim, there are no signs of their management. Before the conquest by our troops of the Ossetians, living in these gorges, they represented a model of primitive peoples. They had only family ties; in the villages and gorges there was absolutely no order and obedience; everyone able to wear weapon considered himself completely independent. ” 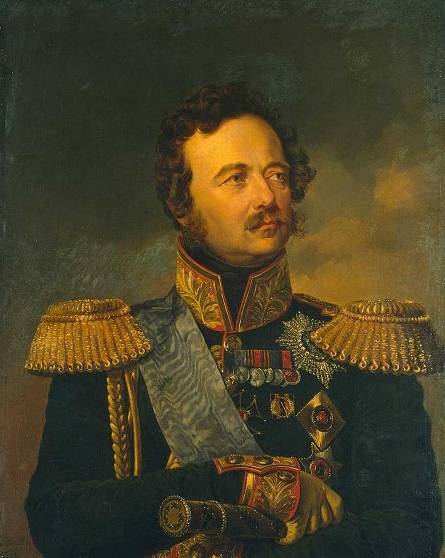 But this did not in the least stop the growing appetites of the Georgian princes, who literally bombarded the command with various documents, allegedly confirming their rights not only to land, but also to people. Princes from the Machabeli clan joined the Eristovs. In reality, these “documents” had no weight. Count Paskevich himself became interested in the question, writing the following:
“Meanwhile, although these decisions gave the princes of Eristov landowner rights over their estates, in general Ossetian villages were never in their possession. All the rights of them and other landowners over Ossetians were limited by the fact that not one of these people dared to appear in the bazaars and in the villages of Kartlini (Kartli, Kartalinsky kingdom. - Approx. Auth.) Without being completely robbed of the so-called landowners ; some of these latter even built fortified castles in tight gorges, past which no Ossetian could pass without risking losing all their property; under various pretexts, they took Ossetian children and then sold them in different hands. ”

Moreover, if the Ossetians were serfs of the Georgian princes legally, then why did the above-mentioned princes themselves not return their obedience? It's simple: numerous military expeditions against Ossetians could rarely be called at least somehow successful. So, in 1817, one of the princes of Eristov made a campaign against "his" peasants. As a result, he lost 400 people and returned without salty slurping. The Georgians needed Russian soldiers to bite off someone else's piece. At the same time, the Ossetians themselves claimed that they were ready to pay any taxes to the Russian Tsar, but never to the Georgians. 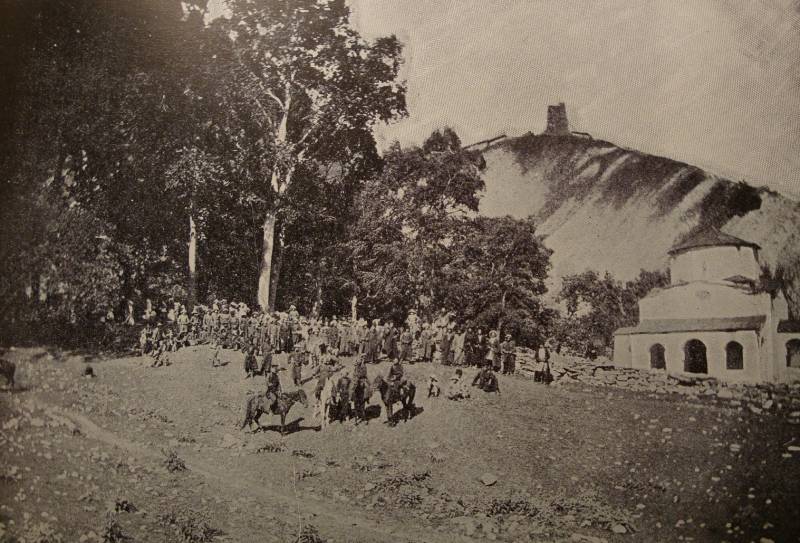 Ossetian peasants near the church of St. George the Victorious

Emperor Nicholas I put a point in the dispute, tired of endless petitions and complaints from Georgian princes. He signed a special decree according to which all residents of South Ossetia were transferred to the category of state, i.e. state peasants. To encroach on exploitation or force such citizens to pay taxes - go against the emperor. With all their pride, the Georgian princes were forced to reconcile.

The bloody winds of the revolution of the beginning of the 20 century in Russia gave rise to a real explosion of the birth of various quasi-states in the Caucasus: there was the Mountain Republic, the Kuban People’s Republic, the Transcaucasian Democratic Federal Republic, and the Georgian Democratic Republic, and God knows what else. In this chaos, Georgia, once loyal to the crown, instantly demanded independence. The emperor was no more, and again it was possible to claim his rights to South Ossetia. And since serfdom was abolished long ago, the population was no longer required. 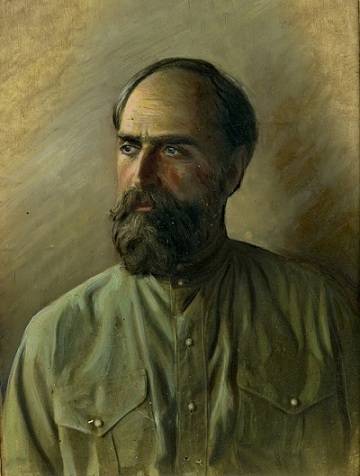 Ossetians offered the political leaders of Georgia, the Mensheviks (who in reality were terry nationalists), a dialogue about the right to autonomy in order to preserve their culture and language. Here is how the ethnic Georgian and Bolshevik Philip Makharadze writes about those events:
“Almost from the very first day the divine“ independent ”Georgian state was born, the Mensheviks enter into open conflict with the Ossetian people. The Mensheviks did not want to hear about autonomy for Ossetians. Ossetia must forget about this autonomy, it must go into the framework of Georgian statehood, it must recognize the sovereignty and great power of the Georgian people, Ossetians must refuse to use their language in school, in business relations, etc. ”

In the first days of March of the 1918 year, punitive Georgian troops led by the Menshevik Kosta Kazishvili and George Machabeli invaded South Ossetia. The last representative at the time of the yet not declared Georgian “republic” should be highlighted, because he is a descendant of the very same princely family of Machabeli, who claimed his rights to own Ossetian peasants and their lands. 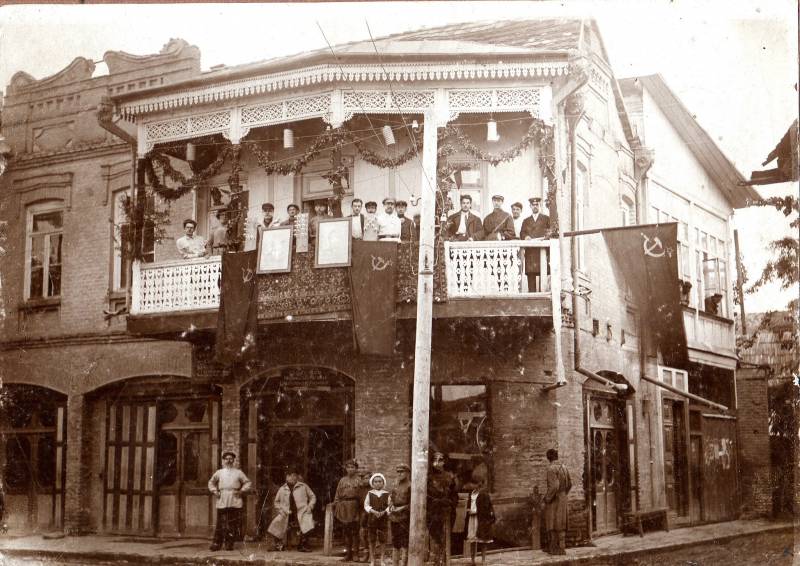 The first battle took place near the village of Archnet, when the Georgians captured a dozen Ossetian hostages. The battle with the Ossetian detachment of "separatists" was short-lived. Not expecting such agility from their "property", the Georgians fled, and the hostages were released. The expedition of Kazishvili and Machabeli found shelter in the Georgian village of Ered.

Gathering strength, the Georgian squad 18 March marched towards Tskhinval. Soon, a rally was organized in the suburban village of Drgvis Kazishvili, scolding Russia for "occupation" and accusing the Ossetians of indulging the enemy. The rally was also attended by the Union of Revolutionary Peasantry, led by Ossetian Georgy Kulumbegov, under whose command there were 300 bayonets of rebel residents. Dialogue did not work, and the scuffle quickly escalated into a shootout. Tskhinvali was covered by hostilities, during which they didn’t use artillery. With a machine-gun fire, the Georgians managed to drive out the armed groups of Ossetians from the city, while capturing Kulumbegov.

The leaders of the Union of Peasants were planned to be shot at dawn. But in the morning, fighting broke out on the outskirts of the city. By the evening of 19 on March, Ossetian detachments, which is indicative, supported by some local Bolshevik Georgians, broke into the capital of the republic. The streets of the southern city were strewn with corpses. Many Georgians were surrendered, and the leaders died in street battles, including the failed owner of the Ossetian peasants, Machabeli. 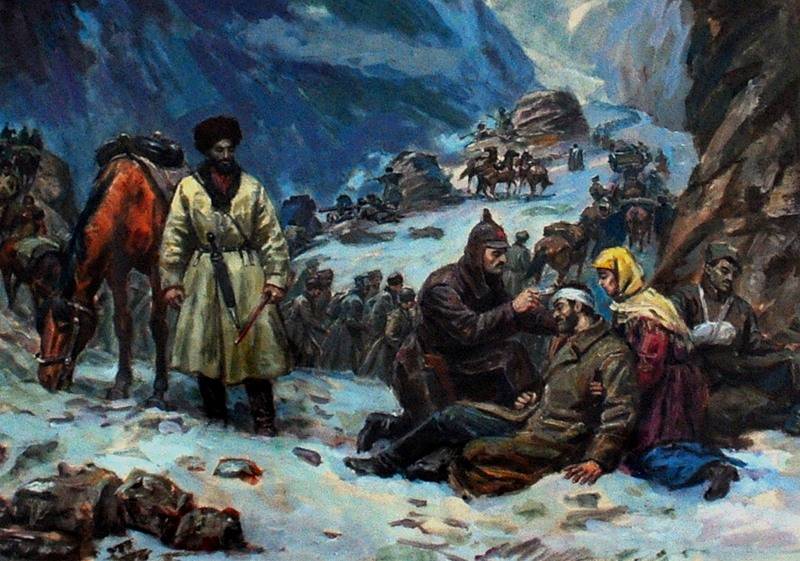 Despite the victory, the situation of the Ossetian armed forces was difficult. There was not enough ammunition, and most importantly, there were no human resources. Let me remind you that at that moment in all of South Ossetia there were no more than 80 thousand people, including old people, women and children. But the population of Georgia has exceeded 2 million. Thus, the rebels even had less rounds of ammunition than the newly made Georgia soldier.

Already on 22 of March of the 1918 of the year, large units of the Georgian troops, bearing the name of the “People’s Guard”, approached Tskhinval. Realizing the senselessness of the defense of the city, Ossetian forces, with the cover of the few troops remaining in Tskhinvali, retreated to the mountains. The fighting in the city did not last long. Almost all captured Ossetians were shot, only the brave but unlucky Kulumbegov was again captured and taken to Gori.

The surviving rebels who had gone to the mountains, taking advantage of the time conquered by the deaths of their comrades, were able to organize defense in a narrow mountain gorge in the Dzau region. The place was chosen so well that all attempts to take the Ossetians by storm failed. As a result, 28 March, the Georgians went to a temporary truce. 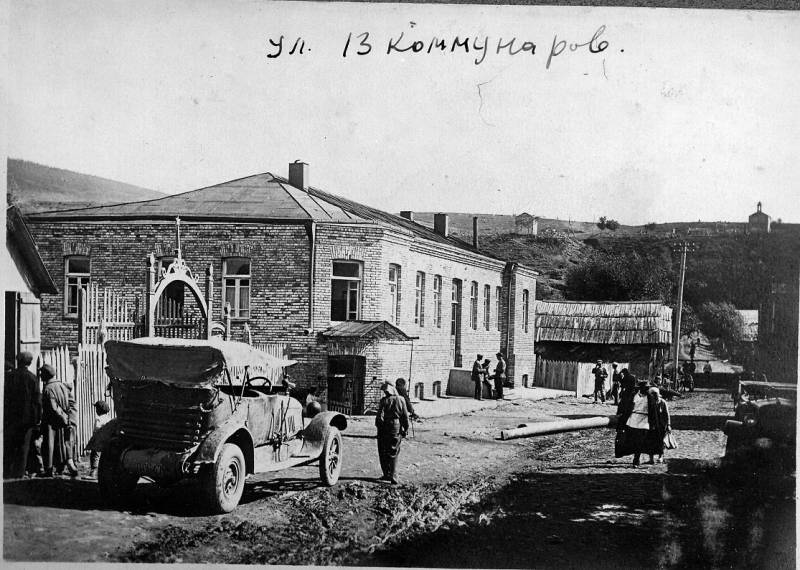 Tskhinval of the 20-30 of the last century

The Menshevik government of Georgia, which was unable to solve any state issues, except for the choice of a new patron and repressions based on ethnic and political principles, was shook by the ground under its feet. Firstly, Kaiser Germany could no longer act as the new owner, and it was urgent to swear allegiance to the Entente. Secondly, the economy was bursting at the seams. Thirdly, the Bolsheviks did not doze off, whom the nationalists in the guise of the Mensheviks feared like fire. Fourth, the outright incapacity of the government caused a series of peasant uprisings. But that was only the beginning.