Battle of the Arctic. Why are the US plans doomed to failure and what are the admirals afraid of? 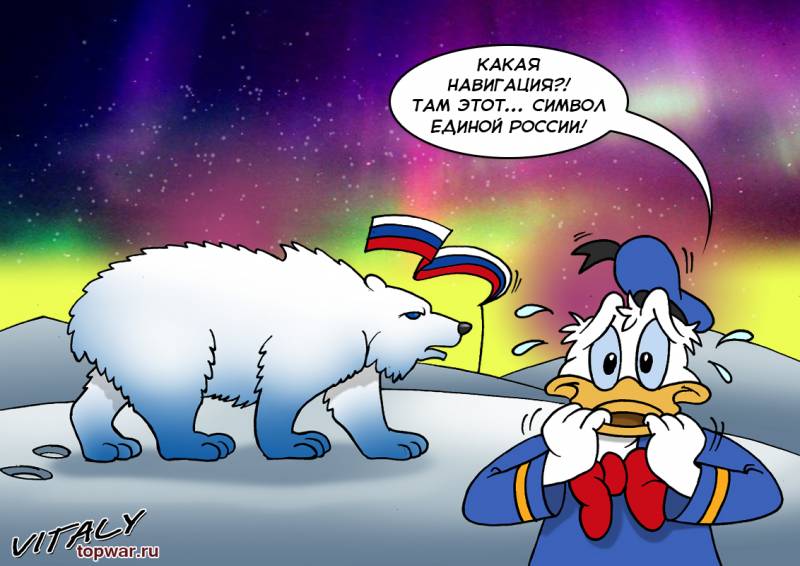 Foreign states now need to notify Russia of the passage of ships on the Northern Sea Route 45 days before it begins. And this notice is mandatory. But the new rules do not boil down to the notification - there must be a Russian pilot on board any foreign warship who will lead the ship along the Arctic coast of Russia.

The fact that Russia will tighten the rules for moving along the Northern Sea Route, it became known in the summer of 2018. A year ago, in August 2018, the Minister of Defense of the Russian Federation, General of the Army Sergey Shoigu, stated that in modern conditions the Arctic spaces had become an object of economic and military-strategic interests of several countries of the world. In this regard, the Armed Forces of the Russian Federation was faced with the task of ensuring the protection of Russian national interests and the inviolability of Russian borders in the Arctic. 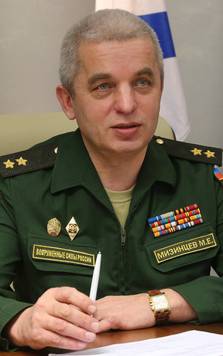 Then, in November 2018, the head of the National Center for Defense Management of Russia, Colonel General Mikhail Mizintsev, announced that in the near future the Russian Federation would limit the possibility of passing foreign warships along the Northern Sea Route. And only then, after the statements of high-ranking military officials, the relevant decision of the Government of the Russian Federation was made. Before new rules were adopted, specialists from a number of departments analyzed possible ways to improve Russian laws regulating Arctic shipping.

Actually, the Russian leadership was pushed to such a decision by the actions of other countries, primarily the United States of America, which increasingly began to state their claims to the Arctic. Americans can understand - for them, the Northern Sea Route is the shortest route to Europe, and this is only in terms of the advantages of the Arctic in shipping. In addition, the United States perfectly understands the military-strategic potential of the Arctic space, its importance for building deterrence plans, under which the Pentagon disguises its aggressive aspirations towards Russia. 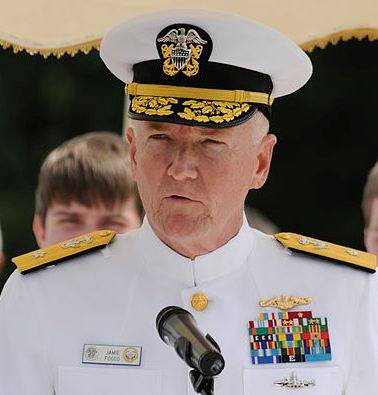 As usual, in the USA they hide behind certain “international interests”, considerations of the “safety of international maritime shipping”. In fact, everything is much more prosaic - the United States has its eye on the Russian Arctic and strongly pushes the idea that the Arctic spaces allegedly do not belong to a country that goes to the Arctic seas with its shores and has the largest Arctic coast, but some kind of “world community”. But the Northern Sea Route runs directly along the sea borders of Russia and it simply cannot but be under Russian control, since any other state of affairs will simply jeopardize the security of the Russian state.

At the end of February, 2019, shortly before the Russian government introduced new Arctic shipping rules, the commander of the US Navy in Europe and Africa, Admiral James Foggo (in the photo) made a very speaking statement, the essence of which was that will not allow the approval of the Russian and Chinese domination in the Arctic. In this case, the admiral could not resist the direct attempt on Russian interests in his speech. 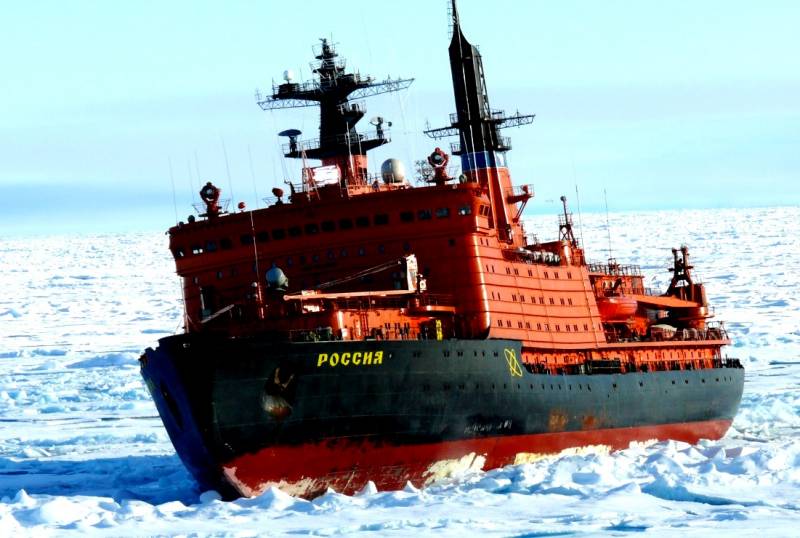 The Russians “consider the Arctic to be their property”, although this is an international territory. This is nobody's water. All countries of the Arctic Council should have free access to them, and we are a member of it,
- emphasized Admiral James Foggo.

These words of the American naval commander are the best confirmation of the correctness of the Russian government, who introduced new rules of navigation in the Arctic, as they vividly illustrate the fact that the US has aggressive plans for the Arctic space and sea communications in the northern seas adjacent to the Russian coast.

The operation on "freedom of navigation" is planned to be carried out through the participation of the US Navy and the US Marine Corps. Secretary of the Navy Richard Spencer stressed that the Arctic operations will begin in the summer - autumn of the 2019 year. The commander of the Marine Corps, General Robert Neller, said that the marines will be trained in Alaska on a scale previously unseen. These statements alone force Russia to take a closer look at the security of its Arctic frontiers. 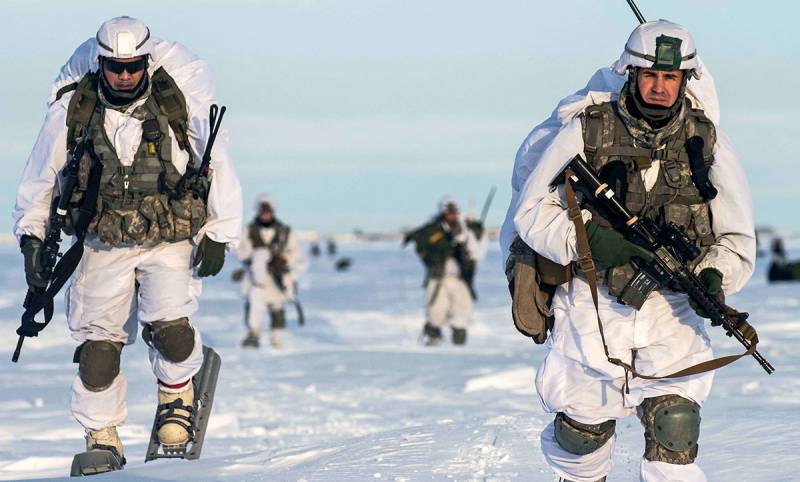 The United States refers to its right to walk the Northern Sea Route.

Strictly speaking, the United States of America has claims on Arctic shipping not only to Russia, but also to its closest neighbor and ally in the NATO bloc - Canada. From Ottawa, Washington is demanding to ensure the extraterritoriality of the Northwest Passage. However, the Northwest Passage has not yet experienced the effects of global warming - it is shackled by multi-year ice, which is beyond the power of not only American but also Russian icebreakers. 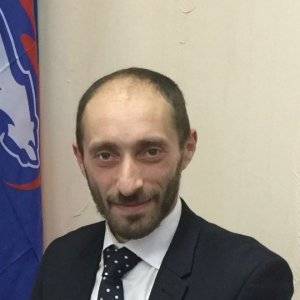 But for the United States, the right to navigate the Arctic is a matter of principle. In order to defend this right, the American leadership declares the possibility of holding a so-called in the Northern Sea Route area. “Free navigation operations”.

Lawyer Ilya Reiser, who has been researching the legal aspects of Russia's presence in the Arctic for a long time, draws attention to the presence of a certain legal conflict.

- Does the United States really have any reason to claim free passage in the Arctic seas?

- That is, Russia still has the right to regulate shipping in the Arctic seas?

- There is the 155 federal law “On Inland Marine Waters, the Territorial Sea and the Contiguous Zone of the Russian Federation”. And in accordance with the law, the territorial waters of Russia include waters whose shores fully belong to the Russian Federation. By the way, the legislative regulation of shipping in the Arctic seas has a long-standing history - the instruction appeared back in 1893, according to which “all bays, bays and raids of the Russian coast of the Arctic Ocean and the entire White Sea south of the lines connecting the entrance capes fall under the sovereignty of Russia.”

- But after all, the existing legal conflict allows the courts of the United States and other states to still claim passage through the Northern Sea Route?

- Russia really does not have the formal right to take control of the entire Northern Sea Route, but then the freedom of navigation along individual sections of the sea route is of no fundamental importance for the United States, Great Britain, China or any other state. Since it is almost impossible to pass the Northern Sea Route without affecting the territorial waters of the Russian Federation. It means that in any case Russia will have to take permission. And not only permission. Without Russian navigation, passing through the SMP is an extremely difficult and risky task. 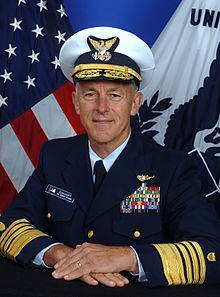 American Admiral Paul Zuckunt, in 2014-2018 The US Coast Guard commandant admitted that, during his service, his biggest nightmare would be to be stuck in an American warship in the North Ocean with a bleak prospect of calling Russian icebreakers for help. For the United States, such a development of events would indeed be a real shame, since it would show the whole world the US’s unpreparedness for Arctic shipping and its dependence on Russia.

In addition, there is also such a nuance as ensuring environmental safety. In accordance with international law, as attorney Ilya Reiser notes, Russia is responsible for protecting the environment in its coastal zones, including in the Arctic. Uncontrolled passage of vessels along the Northern Sea Route will entail unavoidable environmental risks. Therefore, it is quite possible to create a couple of national parks in coastal zones and for this reason alone, do not allow foreign vessels to pass through these sections of the Northern Sea Route without permission from the Russian authorities.

What prevents the US from being present in the Arctic

For the presence in the Arctic space, the United States of America has one more serious obstacle, which is not directly related to Russian control over the Northern Sea Route. The United States does not have a full combat fleet ice class. Therefore, when the US Secretary of the Navy, Richard Spencer, spoke about the need for an operation on freedom of navigation in the northern seas, he cunningly put it mildly. After all, there is simply no one to lead American warships along the Northern Sea Route.

The US has the only medium-sized icebreaker USCGC Healy. Launched in 1997, this icebreaker is the largest US Coast Guard vessel. Over twenty years of service, he has repeatedly won awards from the American leadership for participating in numerous operations in the northern seas. The vessel accompanied scientific and rescue expeditions, and the 5 of September 2015 of the year became the first unaccompanied American vessel to reach the North Pole. 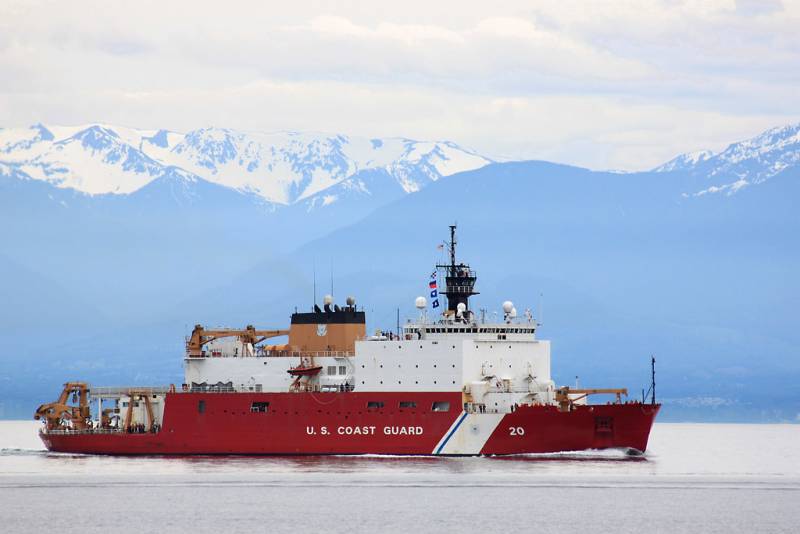 But the USCGC Healy is booked until the end of this year. This means that in the near future he can no longer take part in the posting of American warships in the Arctic. And although not all sections of the Northern Sea Route are covered with ice, in the case of an operation on freedom of navigation, American ships (or a ship) will have to overcome the ice in any case. But what to do in this case? American ships will not be able to overcome the ice without outside assistance, which means they will have to turn to the very Russia, for the sake of freedom from control of which it is planned to carry out an operation in the northern seas.

Many experts rightly point out that the true permission for navigation in the northern seas is not issued by state structures, but by the ice itself. And indeed it is. If the country does not have the ability to provide shipping through ice-covered sections of the northern seas, then what kind of “free navigation” in the Northern Sea Route can we talk about? And while Russia has tremendous experience in Arctic shipping and has high-class icebreakers and navigation systems, the United States has incomparably lower capabilities. And before declaring ambitions, it is first necessary to create all the necessary conditions for translating the desired into reality.