August 2 2019
16
Exactly 78 years ago, on 1 on August 1941, the USSR Defense Fund was created. This article is devoted to his role in the Great Patriotic War and the approach of Victory over Nazism. 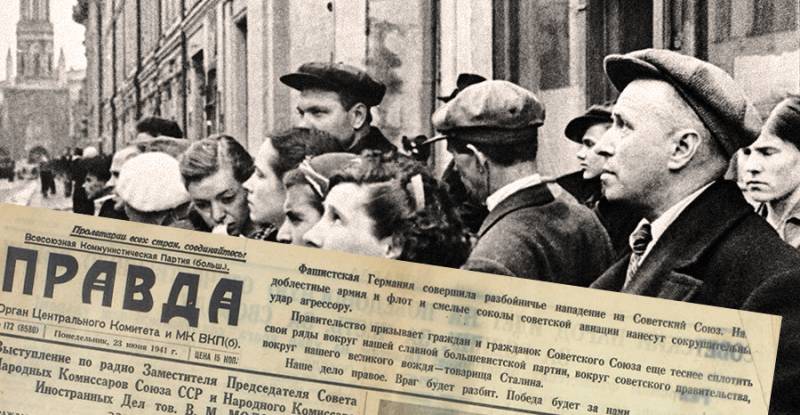 From spontaneous fundraising to the creation of the Defense Fund

22 June 1941 year, the peaceful life of Soviet citizens was destroyed by the news of the attack of Nazi Germany. A few days after the outbreak of the war, a spontaneous fundraising began for the needs of the Red Army. People understood that disaster had come to their house, and now it was up to everyone how further events would develop. Therefore, labor collectives and individual citizens began to contribute their savings to the Defense Fund created for this purpose.

29 July 1941 in the newspaper "Pravda" published a review of readers' letters under the title: "Workers offer to create a Defense Fund." Three days later, on 1 of August 1941 of the year, the editorial “Truth” published the article “Defense Fund - a new manifestation of Soviet patriotism”, where it was said:
“The Defense Fund arose spontaneously. He must be given the appropriate organizational forms - Party, trade union and Komsomol organizations should take care of this. ”

So it became known about the creation of a separate Fund in the State Bank of the USSR to raise funds for defense needs.

The movement for the creation of the Defense Fund received a massive response among the population and became evidence of the popular support of the Red Army in its struggle against the Nazi invaders. In conditions of war, when the financial problem inevitably worsened in the state, this movement became an invaluable source of replenishment of the state budget.

The filling of the Fund came at the expense of voluntary donations of citizens and labor collectives. Accordingly, the contributions were individual and collective. The first to respond to the call were the workers of Moscow factories. They were the first contributors to the Fund. Workers from all over the country immediately picked up their initiative.

By mid-August 1941, the State Bank received 5 million rubles, and by November 1 this amount reached 1 billion rubles. Residents of cities and villages transferred part of their salary, valuables, and government loan bonds to the Fund. The Defense Fund also deducted workdays, compensation for unused holidays, funds received from subbotniks and overtime, as well as overplanned products of defense enterprises. For example, in the early days of the war, workers from Kharkov collected several million rubles, and in July 1941, all working Kharkov citizens transferred their one-day earnings for defense.

To tanks and planes

The activities of the Defense Fund in the initial period of the war had its own characteristics. The first one and a half months of the war, this movement did not have clear organizational forms. Both in the center and in the localities, the reception of cash contributions was carried out by various organizations and institutions.

Quantitative and qualitative shifts occurred at the end of 1942 - at the beginning of 1943 of the year. To a large extent, this was predetermined by the victory of the Red Army at Stalingrad. It was during the days of the defeat of the Paulus group in many regions and territories of the USSR that a massive fundraising began for the construction of new tank columns and squadrons of military aircraft.

Beginning in the fall of 1941, unlike the contributions of the first months of the war, money began to go not to defense in general, but to the construction of specific types of military equipment. This can be seen by the names that began to receive samples of weapons built on charitable contributions. For example, if in June - August of the 1941 of the year there were generally accepted inscriptions like: "Death to the Fascists", "For the Motherland", "For the Bolshevik Party", "For Stalin", then already in the autumn of that year, tanks and more began to arrive at the front airplanes with the names of those at whose expense they were built.

Already in the autumn of 1941 of the year, registered squadrons of aircraft appeared in the Red Army air regiments: Omsk Komsomolets, Novosibirsk Komsomolets, MOPRovets of the Kirov Region, Sunny Kyrgyzstan, Saratov Collective Farmer, Khabarovsk Komsomolets and others. The same custom - to name equipment in honor of labor collectives that raised money for its construction, was widely used in tank units. Until the end of 1943, the number of such equipment has steadily increased. In the end, the names of labor collectives, regions or republics, the funds of which were built weapon, supplanted the typical slogans of the initial period of the war.

In 1942, the Saratov collective farmer Ferapont Petrovich Golovaty initiated the new patriotic initiative. Contributing money to the local branch of the Defense Fund, he wished for the fighter built on his savings to bear his name. Soon this noble undertaking became widespread.

Many people, not only in the Soviet Union, but also abroad, made personal contributions to the Defense Fund. For example, the composer and musician Sergei Vasilievich Rachmaninov transferred to the Red Army fund a fee from several concerts that he gave in the USA.

Large amounts were donated by the donors who refused to pay for the donated blood in favor of the Defense Fund. There were small divisions of the Fund, for example, such as the Mother’s Revenge fund, on whose funds the tank column Mother of the Front-line Soldier was built.

Mass collection of funds for the production of weapons, radio stations, equipment and clothing began in the 1941 year and continued until the end of World War II. In total, the Defense Fund and the Red Army Fund received more than 17 billion in cash, 13 kg of platinum, 131 kg of gold, 9519 kg of silver, 1,7 billion rubles of jewelry, more than 4,5 billion rubles of government bonds. According to the most conservative estimates, more than 2500 combat aircraft, several thousand tanks, 8 submarines, 16 high-speed torpedo boats were built on voluntary donations of the population during the war. And in addition, the front needed uniforms and medicines, warm short fur coats and boots, special equipment and machinery, cars and tractors, steam locomotives and wagons, firewood and coal, spare parts and much, much more.

Military equipment and equipment manufactured at the expense of citizens of the USSR played a significant role in the approach of Victory. This was especially important in the 1941 — 1943 years, when the situation on the fronts was often critical. Tanks and guns, planes and ships with the names of simple toilers on the sides gave the fighters and commanders confidence in victory, because this was a clear proof of the unity of the front and rear.

Who ensured the work of the Fund

A few words about how the work of the Defense Fund was carried out. It was provided by employees of savings banks and branches of the State Bank of the USSR. In all its branches, special accounts were opened to which charitable contributions were accepted. Cash, gold and silver items, royalties and government bonuses, government loan bonds, cash and lottery wins, funds earned on Sundays and subbotniks, and profits from the sale of crops obtained from superplanned “hectares of defense” were transferred to the Defense Fund.

The savings banks of the State Bank of the USSR received and recorded charitable contributions from enterprises, public organizations, and the public. All funds that came into the balance account No. 14 “Country Defense Fund” were credited exclusively to the union budget. They were targeted spending on the country's defense. Of course, a lot of campaigning was conducted to raise funds for the Defense Fund, and then for the construction of personalized military equipment. Propaganda was carried out by state and local authorities, the media, employees of the branches of the USSR State Bank.

The activities of the financial institutions of the USSR during the war were clear and well organized. In addition to filling the Defense Fund and the Red Army Fund with funds from the population, employees of the branches of the State Bank implemented securities among citizens - bonds of four military government loans worth 72 billion rubles. To understand whether it is a lot or a little, it’s enough to say the following: 15% of all USSR military expenditures were covered only through these loans.

In addition, during the 1941-1945 period, four cash and clothing lotteries were held, which brought the state 13 billions of rubles in revenue. In total, during the war years, population payments accounted for one third of all revenues to the state budget and almost half of direct military expenditures, including approximately 20% of voluntary contributions.

The fight against inflation

The Defense Fund successfully performed another function, no less important than the supply of the Red Army with weapons and equipment. We are talking about the fight against inflation - an inevitable crisis in times of military conflict. During the Great Patriotic War, the USSR suffered enormous losses from the loss of natural and human resources, from the evacuation of industrial enterprises to the rear and the restructuring of the national economy on a war footing.

Under such conditions, the militarized economy of the country could not provide a sufficient number of people with basic goods, primarily food and clothing. The shortage of these goods led to an increase in prices on natural markets in all corners of the USSR, but there was not much inflation during the war.

This was made possible thanks to the financial policy of the state, which provided, in particular, the introduction of a card system for essential goods and the exclusion of excess money from circulation. The activities of various funds, primarily the Defense Fund, the organization of state loans and monetary and clothing lotteries contributed to the solution of this most important task. As a result, during the years of World War II, the USSR never resorted to money emission, and state prices remained stable until the very Victory.

We are in Yandex Zen
Diplomats of the People's Commissariat of Defense: on the eve and during the war
Myths of the Great Patriotic. Papier mache helmet
16 comments
Information
Dear reader, to leave comments on the publication, you must to register.