August 7 2019
12
At the moment, the ruins of the once powerful defensive structure, called the Kelasur wall, or the Great Abkhaz wall, are on the territory of the Republic of Abkhazia. The wall once stretched from the Kelasuri River (Sukhum region) to the Inguri River, in fact, along which the modern border of Abkhazia and Georgia passes. The length of this structure is estimated at 160 km. Analogues of the Kelasur wall in the Caucasus, and in Europe, do not exist in principle. This majestic fortification once revived all infrastructure construction in the area. In some sections of the wall you can find the remains of ancient roads, in others, small fortresses adjoin the wall, and it itself bristled with hundreds of fortified watch towers (the exact number is still unknown). At the same time, the structure was constantly being completed and was not static. 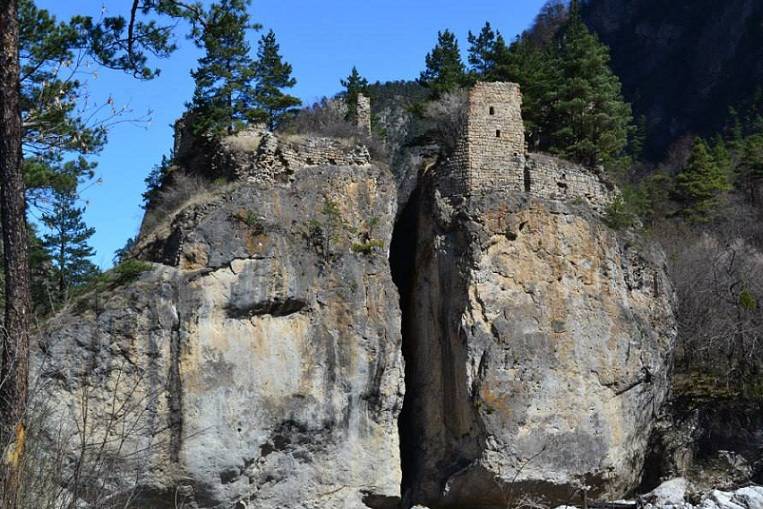 The towers of the Great Abkhazian wall are built on almost square quadrangular foundations. They are rectangles with sides up to 8 and 9 meters. The towers, like the wall itself, are made of local cobblestone and limestone fragments. The entrance to them is at ground level, however, traces of repeated restructuring of both the entrances and the direction of the loopholes are visible, which, of course, makes it difficult to determine the direction of defense, and, therefore, the authorship of the structure. In addition, it is extremely difficult to determine which tribes lived in this area during a given period, which gives rise to some more incredible assumptions beyond the list of standard theories.

Despite the fact that research on the Kelasur wall began back in the 30 of the 18 century by a Swiss of French origin, archaeologist and ethnographer Frederic Dubois de Montperet, the exact answer who raised it and against whom it was directed does not exist to this day. The situation with the search for answers to these questions is so acute that the specialist of the Ministry of Culture and the Protection of the Historical and Cultural Heritage of Abkhazia, historian Sandor Kaitan, in an interview with Sputnik in 2015, said:
“The Great Abkhazian wall, despite the fact that it is listed in the preliminary lists of especially valuable objects of historical and cultural heritage, still does not have its passport, since the issues of dating have not been resolved. This prompted us to begin archaeological excavations in the winter of 2013. ” 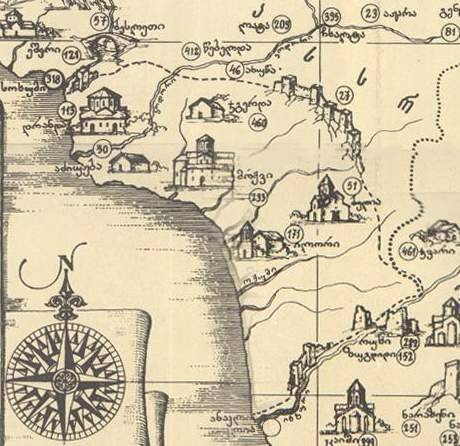 An additional complication in the work of historians and archaeologists is the national-political issue. Thus, the vast majority of Georgian scholars absolutely categorically argue that the wall was erected by Georgians with a natural conclusion that Russian-Abkhazian historians simply “privatized” someone else’s, although Abkhazian and Russian historians are just engaged in an objective study of the structure as part of a joint Abkhaz-Russian project of specialists Abkhaz Institute of Humanitarian Research ANA and Institute of Archeology of the Russian Academy of Sciences.

In total, there are several theories of the origin of the wall, each with its own argument and its own weaknesses. The so-called Georgian (also known as Mingrelian or Mingrelian) theory says that the wall was erected in the 17 century by the rulers of Megrelia Dadiani, namely Levon II Dadiani. The wall was called upon to defend Megrelia from Abkhazian raids, for throughout the 17 century Abkhazia and Megrelia were in a state of permanent and devastating war for both peoples. This theory is starting to stagger for several reasons.

Firstly, the very possibility of the Mingrelian princes to build such a powerful fortification is being questioned. It would be enough for the warring princedom of forces and resources, being threatened by constant raids, to erect a wall is unlikely. Secondly, such a wall appeared at that time, the number of raids and their intensity should have been significantly reduced, but this did not follow. For example, the patriarch of Jerusalem, Dosipheus II at the end of the 17 century, wrote that "the Abkhazians devastated Mokva, Zugdidi and the entire side from Dioscuria to Gipius" (Tskhenis-Tskali River in Western Georgia), i.e. regions located behind the wall. Thirdly, of course, they could use some fortifications of the wall of the mingrel (according to some scientists, they didn’t just use them, but they also finished building them), but they were not able to assemble a garrison for the full defense of its entire length, and therefore the idea of ​​such construction is doubtful.

The next version claims that the wall was built by Greek colonialists. So, in the writings of Gekatey of Miletus (550-490 of the year BC), one can find an indication of the presence of a kind of “Coraxian wall” and “Coraxian fortress” in the area of ​​modern Abkhazia in the 6 century BC. Firstly, these dates are quite correlated with the emergence of the famous Greek colony of Dioscuria. Secondly, in the Dioscuria region there lived a tribe of Coraxes, who could give the first name to the structure, and also be those from whom this structure was called to defend. Thirdly, it is unlikely that Hekatei would mention any kind of fence in his works, and there were no other massive walls in the Dioscuria area. 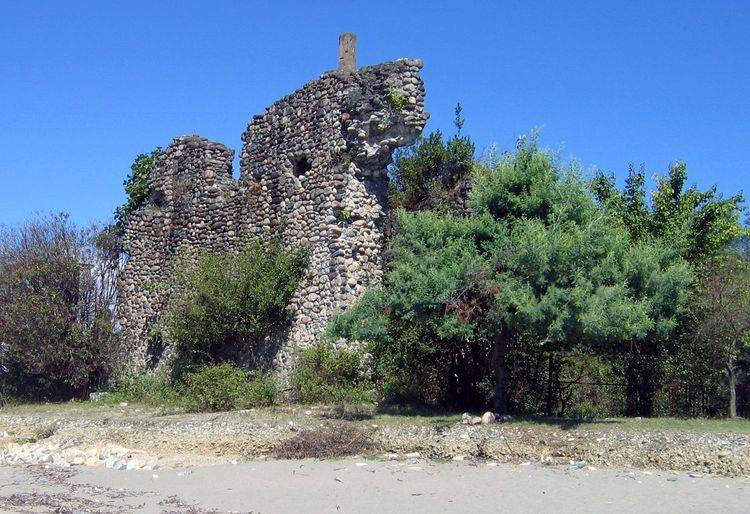 However, the question arises: did the Greek colonists have sufficient resources to build such a massive fortification? The question is complex, but the heyday of the Greek colonies in itself suggests that the colonists could afford such a laborious construction. For example, Gorgippia (Anapa), located north of those days, was just a metropolis with its own sewer, stone-paved streets, strong fortress walls, and the brand of the city was stamped on each tile.

True, a number of figures believe that the Corax was built just by the Coraxes, but this does not hold water, because this tribe was engaged in predatory raids; it did not have statehood and, of course, could not have a clue about borders and some kind of border fortifications.

However, the question immediately arises of the appropriateness of such a large-scale defensive construction to protect one Dioscuria, because the next large colony, Fasis (the area of ​​modern Poti), was far from the Kelasur wall and Dioscuria. Not to mention the number of soldiers that would be required for the service on the wall. Could a Greek colony afford an army of several thousand people? Most likely no.

The trace of the great Byzantium?

Another version of the appearance of the wall is connected with Byzantium. In fact, in the 6 century, the Byzantines captured the coast in the area of ​​modern Sukhum and took control of Dioscuria, or rather, Sebastopolis (that was the name of the city that was once captured by the Romans at that time). In the same century, Emperor Justinian the Great began large-scale infrastructural transformations in the area of ​​the ancient city. So, the philosopher Stefan of Byzantium just in the 6 century A.D. writes about the Great Wall. But just his testimonies raise even more questions, because he calls her Coraxian. 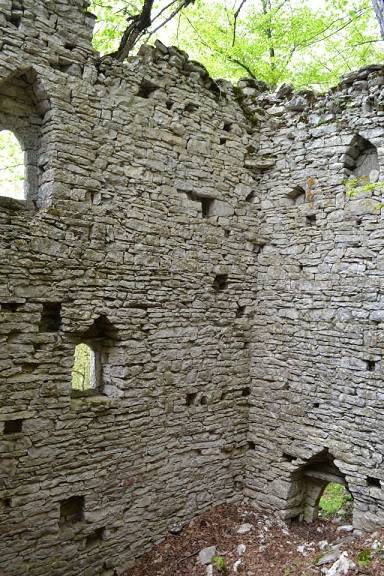 Inside one of the towers

At the same time, often the apologists of the "Byzantine" theory do not argue with the "Greek" roots of the wall, believing that the Byzantines could well use the ruins of older structures as a basis for their own. After all, Sebestopolis was not rebuilt by Byzantium from scratch. And again the question arises: did the Byzantines have the possibility of such a construction? Of course, yes, especially during the reign of Justinian the Great. Given the constant competition and open military confrontation of the empire with the Persians and Caucasian peoples, including neighboring Mingrelians, it should be recognized that the presence of such a wall was entirely due to defensive necessity. 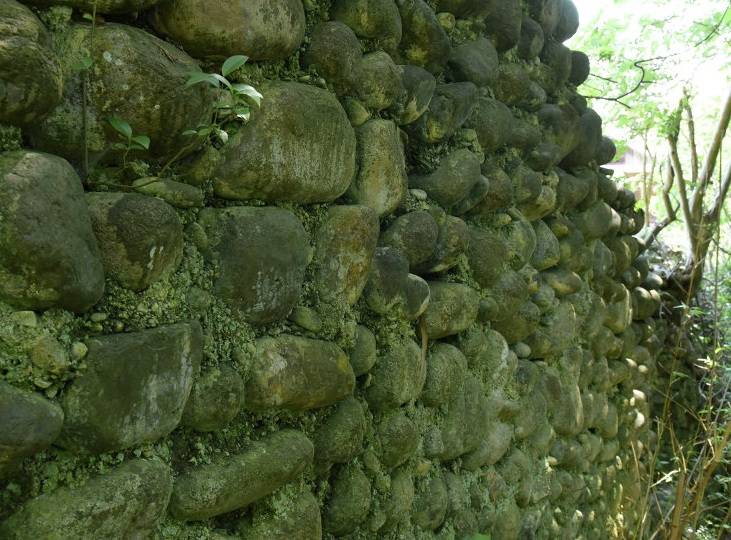 But even this theory is being questioned. So, if Byzantium had erected such a strong defensive line, then for what reason in the 550 year A.D. the Persian shahinshah Khosrov Anushirvan organized a major campaign on the territory of Colchis (the territory of Georgia and Abkhazia) and marched through these lands without encountering strong Byzantine resistance? The Byzantines did not even try to defend the Sebastopol fortress, they left it, to say nothing of the defense of the wall. In addition, if the wall was supposed to protect Sebastopolis from Mingrelians, including, then it is located somewhat incorrectly. However, this claim is quite controversial, as there is still debate over the borders of the lands of the Abazgs, Apsils, Megrelians and Lazs who lived in that region.

There is also a version of the Persian origin of the Kelasur wall. In the 5 century in Lazik (the state formation of the Laz), Persian influence was established. At the same time, Lazy are in the struggle against the Byzantines, having found their overlords in the Persians. Thus, the Persians and manholes also had a reason to build a wall. In addition, the Persians in the Caucasus had already had the experience of erecting such fortifications. The Persians, namely the already mentioned Khosrov Anushirvan, is considered the founder of the Derbent Wall, a once very magnificent defensive structure. 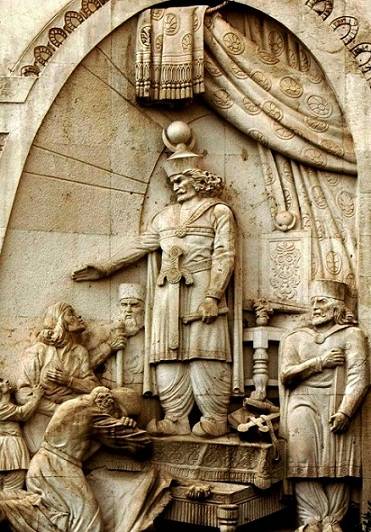 Khosrov Anushirvan. Bas-relief in the building of the Tehran court

However, the hope that the secret of the Abkhaz wall will be revealed remains. Already mentioned by the author, Sandor Kaitan stated:
“The stratified, strictly layer-by-layer revealed and fixed by us material contains a complex set of artifacts dating from the early Middle Ages, 6 — 10 centuries. The lower layer is 6 — 7 of the century, the upper - 8 — 10 of the century. The basic question of who built the wall has not yet been answered. In any case, the construction was carried out not without the participation of the local population, maybe even his participation was decisive in this matter. But we must understand that we examined only part of the huge wall, the conclusions are not final, there should be further research. ” 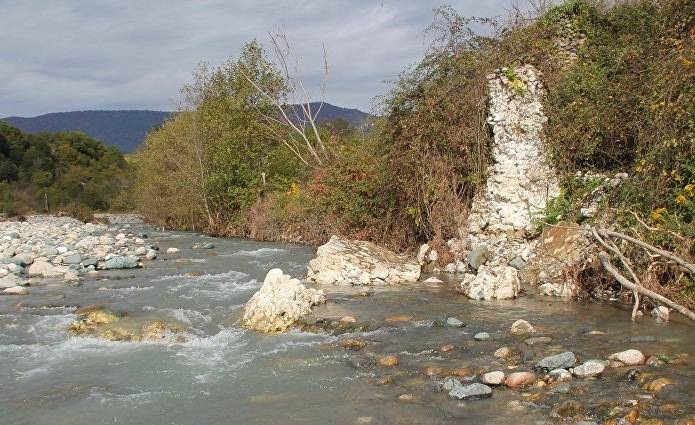 As the saying goes, the truth is somewhere nearby ... Only now there is less and less time for knowing its time. Fragments of the wall, scattered over the mountains and gorges, are gradually being destroyed under the pressure of years, mountain rivers and, to be honest, the very person who wants to inherit in any place where he appears.