August 1 2019
63
As part of the 19 Northern Strike exercise in northern Michigan, US National Guard forces tested a new lightweight Hawkeye 105 mm howitzer (Hawkeye) with reduced recoil on the chassis of the Humvee multipurpose army SUV. The Hawkeye howitzer system is still considered experimental, although it was first introduced to the public back in 2011. In total, about 22 of thousands of National Guard troops, as well as members of the US allied countries: Great Britain, the Netherlands, Bulgaria, Latvia, Estonia and Jordan, take part in the exercises, which are held from 2 July to 2019 August 5. 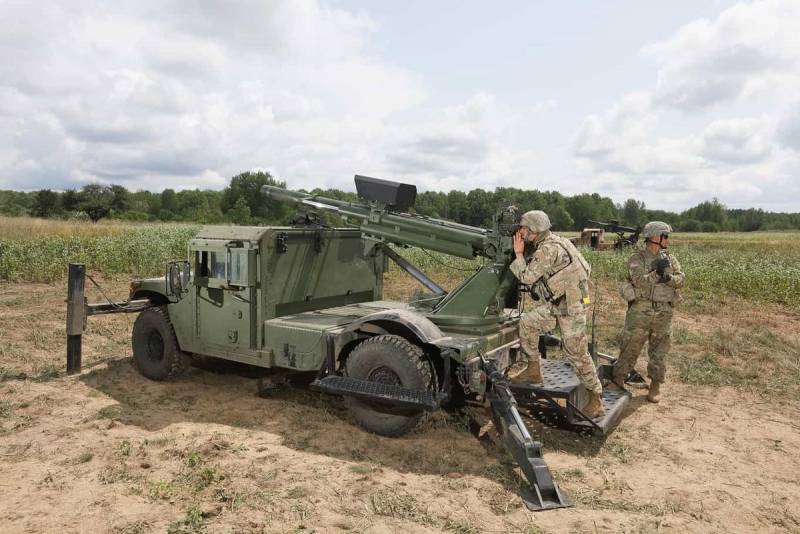 The Hawkeye 105 mm self-propelled howitzer on the Humvee four-wheel drive chassis meets the demands of not only the US military, but also meets the requirements of foreign customers for such artillery systems. Today it is a unique opportunity to get a self-propelled howitzer at an affordable price. In this case, the artillery installation can be used by expeditionary forces and highly mobile units. The artillery installation satisfies the concept of fire support for airborne and air assault units. This artillery system is ideally suited for weapons of light infantry units, whose role in the United States has recently been played by the 101-I airborne (air-assault) and 82-I airborne divisions.

This self-propelled artillery system ideally fits the concept of an artillery raid, which has been practiced by field artillery of the above divisions for more than half a century. The main striking force in such an operation is field artillery, while very limited forces such as a platoon or battery can be involved in an attack. This is enough to achieve most tactical or operational goals. At the same time, a self-propelled artillery installation with an 105-mm gun on the Humvee chassis provides quick movement of artillery weapons to the required positions both by their own course and by air. The main criterion for effectiveness here is not the power of 105-mm ammunition or the maximum firing range, but good rate of fire in combination with the high mobility of artillery mountings capable of conducting quick fire raids and quickly leaving firing positions. 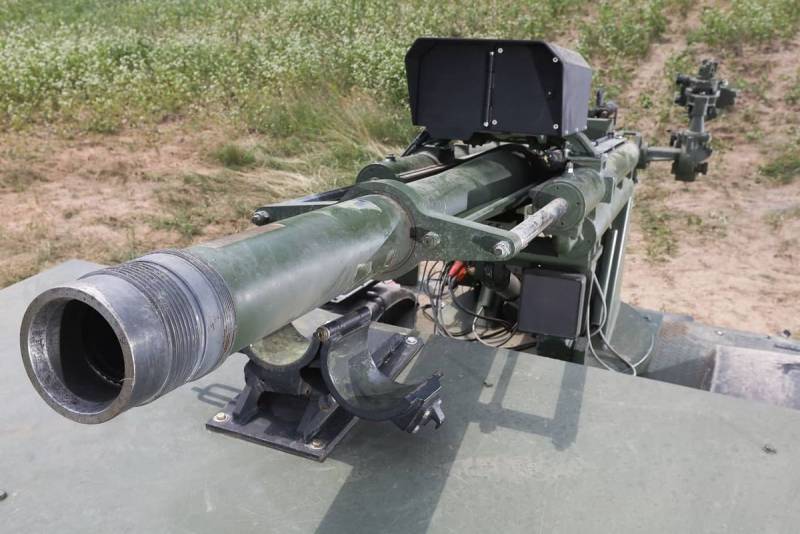 The 105 mm Hawkeye howitzer based on the chassis of the well-proven Humvee SUV in the army significantly improves the mobility, mortality and fire efficiency of light infantry units. At the same time, the installation survives due to the ability to quickly change its location and maneuver with fire. This artillery system is particularly suitable for conducting airborne operations. In this case, it is possible as transportation of the system by air by helicopters or transport aviation and landing by landing method, and landing by parachute method. Hawkey artillery installation significantly increases the combat power and readiness of the landing units, providing them with an effective artillery fire support tool, which is ready for battle almost immediately after landing. Thanks to the universal 105-mm caliber and the use of a time-tested chassis, logistics operations for the use and maintenance of the artillery installation in the troops are simplified to the maximum. At the same time, fighters with artillery skills they already have can easily master the installation, long training is not required.

The Hawkeye self-propelled 105-mm howitzer system on the platform of a multi-purpose army off-road vehicle is characterized by the presence of reduced recoil technology (“soft recoil”, soft recoil). This technology is used to reduce the recoil force of the howitzer when firing. The essence of the technology lies in the fact that the rolling parts of the guns are provided with counter acceleration immediately before ignition of the powder charges. Thanks to this, the recoil energy can be reduced by approximately 50 percent. In turn, this leads to a decrease in the load on the gun mount through the trunnions, allowing developers to significantly reduce the weight of the artillery system compared to ordinary towed howitzers of the same caliber, but with a full barrel rollback. 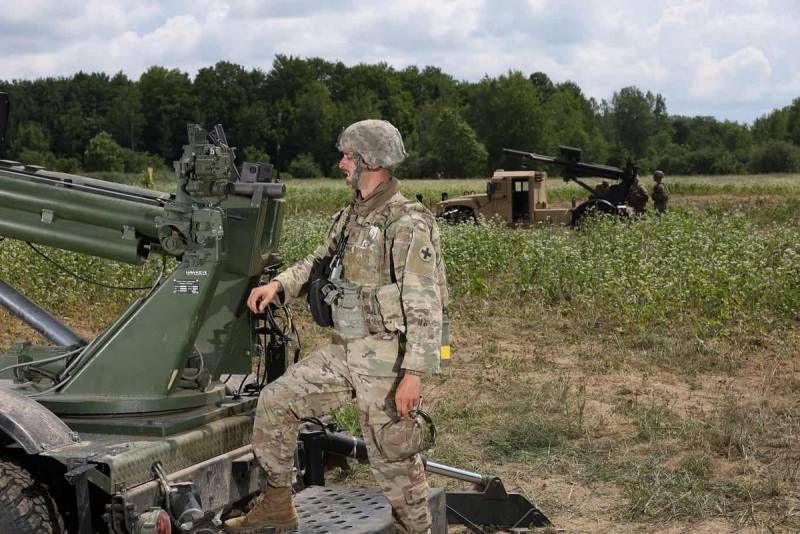 The combination of the 105-mm low-impact artillery system with the legendary, proven time and reliable chassis of Humvee became the key to creating a dynamic artillery platform that allows you to quickly take the necessary artillery positions and also quickly leave them if necessary. The self-propelled artillery system tested in the 19 Northern Strike exercise enhances the combat capabilities of light infantry units and their tactical flexibility. At the same time, it is important that the calculation of such an installation is half as much as that of the traditional 105-mm towed artillery systems available to the US military.

The lightweight Hawkeye 105 mm howitzer with reduced recoil technology is based on the standard American M102 howitzer. The barrel length of the new howitzer is also 27 calibers, but at the request of customers this value can be increased. The firing range of the new artillery system is limited to 11,5 km when using standard ammunition and 15,1 km when using 105-mm active-missile shells. It is worth noting that the entire range of 105-mm ammunition that is currently in service with the US Army, including high-explosive fragmentation shells, smoke, lighting, cluster munitions with ready-made striking elements, etc. can be used for firing. 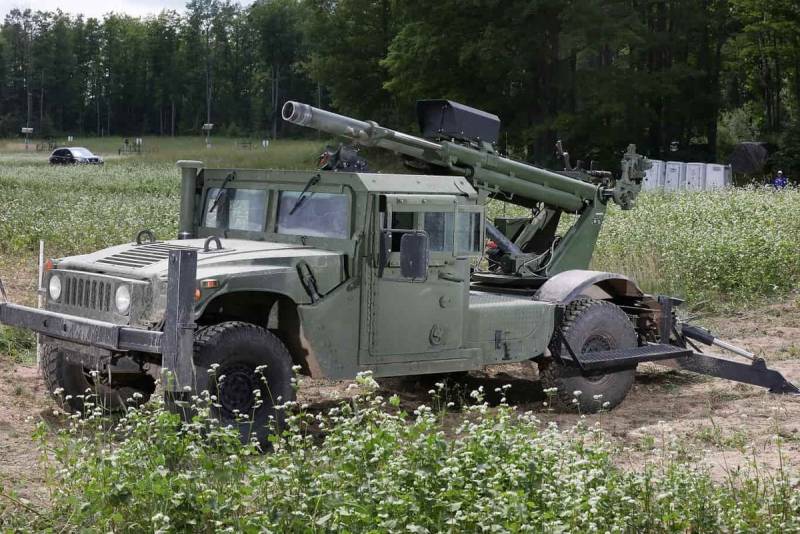 The maximum rate of installation is 10-12 rounds per minute. With its high rate of fire, the artillery mount on the chassis of the multi-purpose American off-road vehicle Humvee (HMMWV) is ideal for implementing the concept of "shoot and run." Having fired several shells at the enemy, the installation can very quickly take off and change position, avoiding a retaliatory strike from the enemy. In this regard, the mobile version of the light American 105-mm howitzer is much more practical than the towed M102 and M119 howitzer options. Another important difference is the reduction in calculation to 3 people, and in case of emergency, only two fighters will be able to service the Hawkeye 105 mm howitzer. Placing on an open platform provides easy horizontal guidance at 360 degrees. At the same time, the gun’s vertical aiming angles range from -5 to + 72 degrees. All this together makes the new artillery mount an excellent alternative to the standard 105-mm towed artillery systems in service with the US Army.

The combat weight of the Hawkeye self-propelled gun on the Humvee chassis does not exceed 4,4 tons. The installation length is about 5 meters, width - 2,4 meters, height in the stowed position - 2,3 meters. At the same time, the reduced recoil, which is one of the main features of the Hawkeye 105 mm howitzer, allows you to place the artillery system on various chassis. Previously, Mandus presented the option of placing howitzers on the chassis of a light tactical vehicle Mack Sherpa with an armored cab. It is also possible to install conventional commercial pickups on the chassis, for example, on the Ford F250 chassis. Due to its low weight, the self-propelled gun can be lifted into the air by a heavy transport helicopter CH-47 Chinook (transport on slings) and can easily be placed in a medium-range military transport aircraft C-130 Hercules. 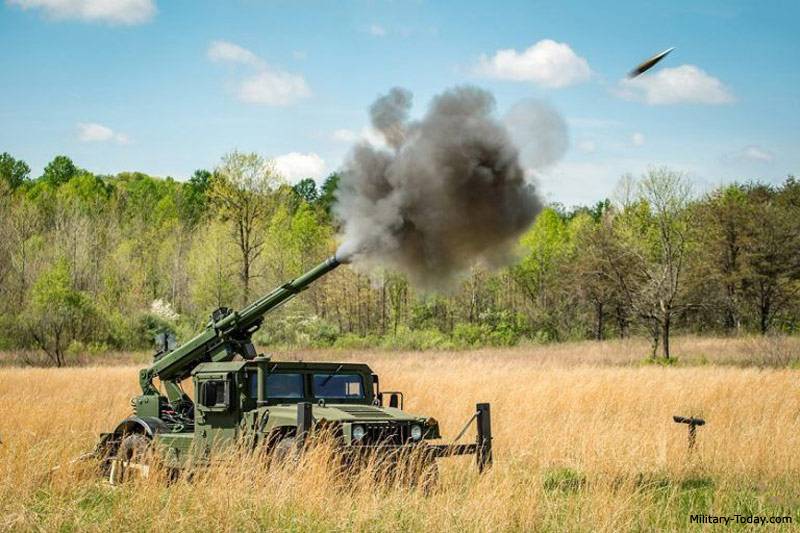 Mounted on a Humvee chassis, the artillery mount has good running characteristics. The maximum speed is up to 100 km / h, the range on the highway is 400 km. The car is able to overcome vertical obstacles up to 0,3 meters high, trenches up to 0,5 meters wide and fords up to 0,76 meters deep (with preparation up to 1,52 meters). At the same time, the car has a full-time all-wheel drive (4x4), which, in combination with an 190-powerful diesel engine, provides the installation with good cross-country ability in most types of terrain.