The beginning of the Second World War. Alternative Polish

Enemy at the doorstep

Summer 1939 of the year. Just recreated, as they say, with a pin, the German Wehrmacht has already focused on the borders of Poland. Hitler and his inner circle, who managed to get repeated carte blanche from the West both for the restoration of the armed forces and for territorial amendments to the Versailles Peace, have no doubt that nothing can stop the invasion of Polish territory. 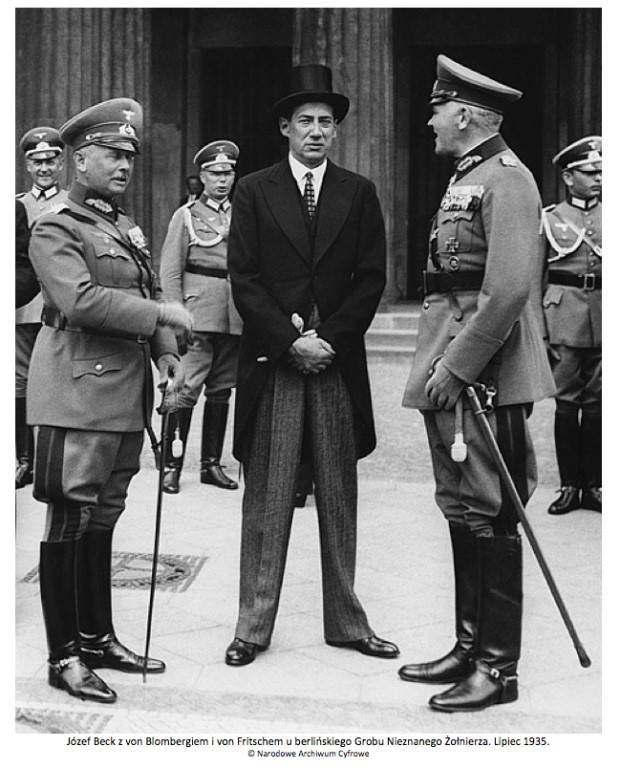 Jozef Beck had no illusions about Germany, but ...

Even the USSR, which repeatedly offered Poland to come to an agreement, was neutralized by the notorious Ribbentrop-Molotov pact. However, in Warsaw they do not want to believe not only intelligence information, but also their own eyes. The Polish ambassador to Germany, Jozef Lipsky, since spring, has regularly bombarded with letters of the then Polish Foreign Minister, Jozef Beck, about "a detailed clarification to the German side of the many benefits of the joint military action of Germany and Poland against the USSR."

Even at the end of July 1939, when the mass repressions of the Nazis against the Poles in East Prussia, West Silesia and the former Czechoslovak-Polish border area sharply intensified, almost no one expressed concern among the Polish leaders. The heirs of Pan Pilsudski reassured themselves with the hope that Berlin was about to announce the alliance of Germany with Poland against the USSR.

More precisely, it was a preliminary joint military plan "Wschodni pytanie" ("Eastern Question"), which the general staffs of Poland and Germany jointly developed, albeit in general terms, by the end of the 1938 year. As a resident of Soviet foreign intelligence in Belarus during the war recalled, subsequently the head of the Polish Communist Party in 1948-56, Boleslav Bierut (1891-56), the "Eastern Question" plan envisaged, for example, joint military attacks on Minsk, Gomel, Zhytomyr and Kiev.

It is clear that for this the Polish army simply passed German troops ... to the Polish-Soviet border. However, Berlin and Warsaw could not agree so: who and in what part of Soviet Ukraine will host. Contradictions sometimes took an absurd form. So, the leaders of the new Commonwealth sought as much as a free port in Odessa or, at least, in the Belgorod-Dniester.

Further - more, from Warsaw immediately, even at the stage of developing joint military plans, they demanded some kind of joint autonomy for the puppet power in Kiev. Autonomy is either from Warsaw, or from Berlin, but for some reason the Nazis immediately refused the Polish partners. Attempts by the pilots to persuade the Nazis to give up, or rather to “return” Lithuania to them, also failed. However, why did Berlin agree to transfer to Warsaw only its Kaunas region, which, however, could be regarded as unprecedented generosity. After all, Kaunas, the former township of Kovno from 1920 to 1939, was considered the capital of independent Lithuania.

Lithuania itself, in those conditions, acted much more decently. When the 10 of September 1939, taking into account the inevitable military defeat of Poland, the German Foreign Ministry unequivocally invited Lithuania to annex the Vilnius Region (now it has become the capital region for Lithuania), the Lithuanian authorities refused the “present” on the same day. But from there already on the eve of the Polish troops completely left. They prudently headed towards the Modlin Citadel, which was blocked by the Wehrmacht, located north of Warsaw). 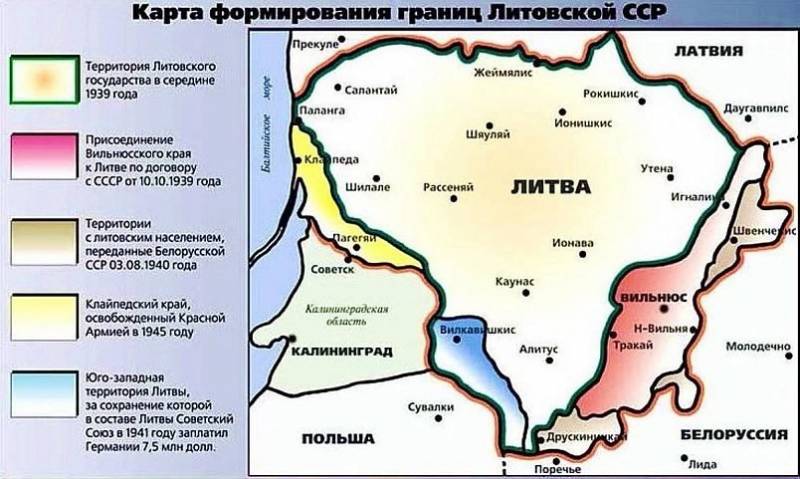 The Lithuanian Foreign Ministry immediately hurried up with a statement about "the invariability of the position of neutrality in the German-Polish war." Nevertheless, in just a month and a little - in October 1939, after the defeat of Poland, Lithuania still received the long-suffering Vilna Territory. Which in the 1920 year, in the wake of triumphant euphoria, after defeating the Soviets, the Polish legionnaires quickly captured the envy of envy.

Berlin is my friend?

However, every single joint project with Berlin eventually went to dust. And this despite the fact that Warsaw, on the eve of Nazi aggression, as is well known, invariably flatly refused Soviet military assistance. In the same way, even before the signing of the notorious pact, the USSR was refused entry of Soviet troops to the Polish-Slovak and Polish-German borders. 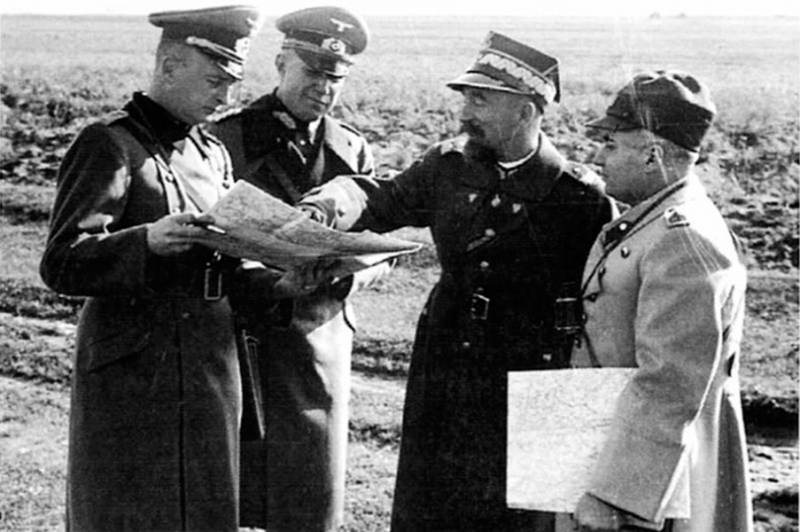 Poland’s military attaché, General Tadeusz Mahalski, on behalf of Warsaw, tried to influence the Nazi leadership through the German ambassador to Turkey, ex-chancellor von Papen. The entire first half of September 1939, when the German Tanks already eager for Warsaw, Krakow and Danzig, Makhalsky convinced von Papen that the German aggression must be stopped, and at the moment it is much more advisable to have a Polish-German joint invasion of the USSR.

However, in Berlin they had already bitten a bit, having decided to accurately fulfill their obligations under the Ribbentrop-Molotov Pact. But Makhalsky continued to unsuccessfully insist on the mediation of Turkey in the settlement of the Polish-German war. However, the Turkish authorities then preferred not to intervene at all. Moreover, as the then President of Turkey Ismet Inenu believed, the fate of Poland was predetermined by Germany long before the 1 of September 1939. And so it happened ... 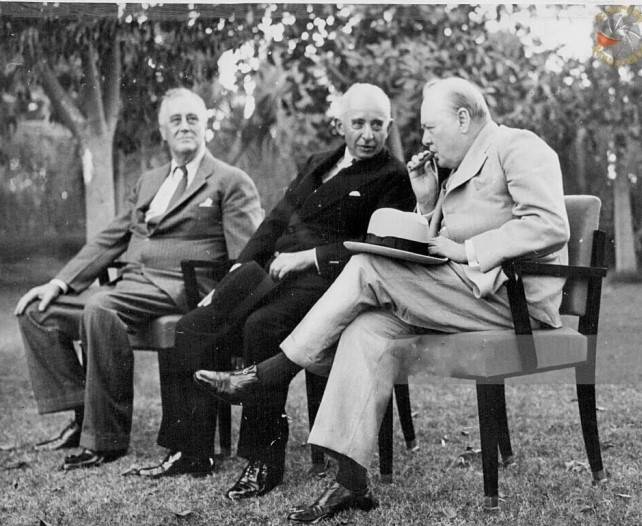 During the Second World War, Ismet Inenu skillfully led Turkey through neutrality. In the photo - with F.D. Roosevelt and W. Churchill

However, on 26 on January 1939, German Foreign Minister Joachim von Ribbentrop, after meeting in Berlin with Polish Foreign Minister U. Beck, made the following entry for Hitler:
"Mr. Beck does not hide the fact that Poland still claims to Soviet Ukraine and access to the Black Sea. Believing that this can be achieved together with the Reich and even Romania, and the remaining issues can be decided on the basis of a compromise."

Such plans were fully reflected in the well-known conversation of Jozef Beck with Hitler in January 1938, which in many respects prompted the USSR to go on temporary cooperation with Hitler Germany. 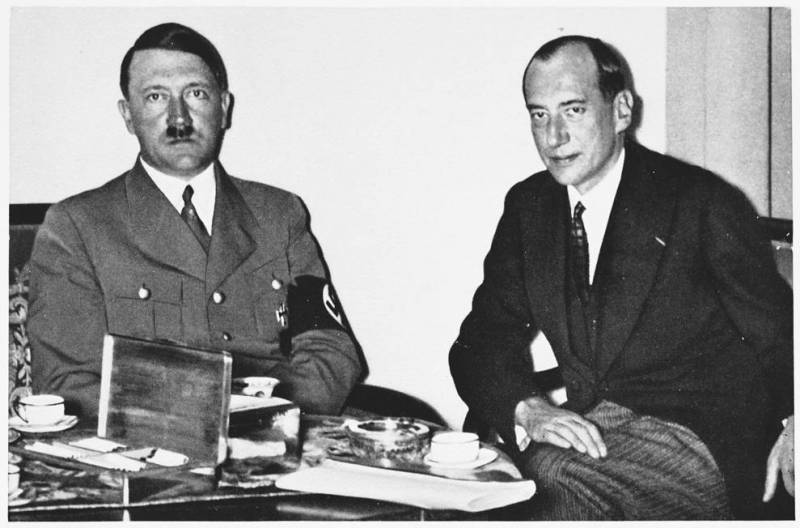 Jozef Beck never persuaded Hitler to fight the USSR together

Incidentally, even in the official doctrine of the Polish General Staff, approved in November 1938, it was quite specifically said:
“The dismemberment of Russia lies at the heart of our policy in the East. Therefore, our possible position will be reduced to the following formula: who will specifically take part in the partition, and Poland should not remain passive in this wonderful historical moment. ... The challenge is to prepare well in advance physically and spiritually. The main goal is to weaken, defeat and divide Russia. ”

Moreover, Poland, counting on the implementation of the above plans, immediately recognized Germany’s rejection of the Memel region (Klaipeda region) from Germany at the end of March of the 1939, which completely deprived Kaunas of almost the entire Lithuanian part of the Baltic coast. Warsaw also did not slow to recognize the occupation in mid-March of Germany by 1939 “remaining” after the well-known, and with indirect Polish participation, Munich redistribution (1938) of Czechoslovakia.

Summing up, we note that Germany, with its traditional pedantry, surrounded Poland for a subsequent crushing blow to it. One should only be surprised that in Warsaw in the autumn of 1939, as they say, they were perplexed: for what? ..

The absurdity, or rather, suicide, of not only the mentioned, but also other large-scale Polish plans quite clearly manifested itself in September 1939. But even then, official Warsaw categorically refused to support the Polish anti-Nazi underground in the regions of Germany adjacent to Poland and in the "free city" of Danzig (Gdansk).

We are in Yandex Zen
Chernobyl notebook. Part of 3
Molotov-Ribbentrop Pact - the policy of pragmatism
73 comments
Information
Dear reader, to leave comments on the publication, you must to register.