July 5 2012
8
At the end of the Civil War, there was a small number of special and high-powered weapons in the Red Army. The bulk were foreign-made guns. Most of them are morally and technically obsolete, and the ability to maintain these weapons in a state of combat capability was limited. Therefore, in 26, the Revolutionary Military Council of the Soviet Union recognized the need to replace foreign-made weapons mat. part of domestic production, determined the calibers of special tools and high power. Artillery Committee GAU outlined a program for developing projects, drawings and orders of experienced tools. The 152-millimeter cannon of the 1935 model of the year was developed in accordance with this program, and the requirements of the Artillery Weapon System on the 33 – 37-e were also taken into account. The main purpose of the gun was to fight the enemy artillery, as well as the destruction of its defensive areas. Many details of the design of this gun are unified with the 203-mm howitzer model 1931 of the year. From the howitzer with small changes borrowed carriage, having a tracked course and allowing firing directly from the ground, eliminating the need to use specials. platforms. A new element of the system was the 152-millimeter barrel, having a piston gate and a plastic obturator. For firing, they used shots of split-head caps with separate projectiles. The range of high-explosive fragmentation projectile (weight 48,77 kg) was equal to 25750 meters, which is fully consistent with the requirements for this instrument. 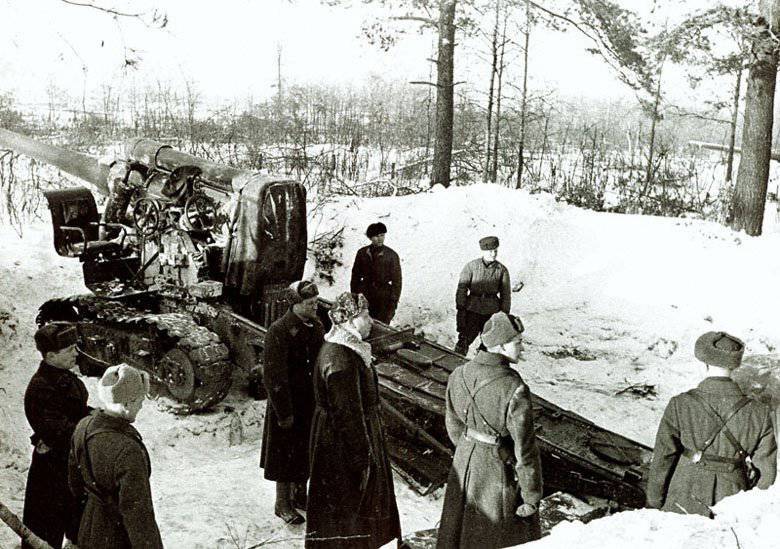 For an instrument of this class, the 152 mm X model gun of the 1935 model was quite mobile, since in the traveling position it could be disassembled into two carts transported by tracked tractors at speeds up to 15 kilometers per hour. Tracked undercarriage ensured a fairly high permeability of the system. Before the war, 152-millimeter guns of the 1935 model of the year adopted a separate artillery regiment of high power RGCs (according to the staff - 36 guns of the 1935 model of the year, human 1579 personnel). In wartime, this regiment was to be the basis for the deployment of another such unit. Since the course of the fighting for the Red Army at the initial stage of the Second World War was unfavorable, 152-millimeter cannons, like almost all artillery of great power, were relegated to the rear. High-power tools came into effect only at the end of the 1942 of the year.

Br-2 was intended for the destruction of objects in the enemy’s rear area — warehouses, high-level control posts, railway stations, field airfields, long-range batteries, troop congestions, and the destruction of vertical fortifications by direct fire. Br-2 (B-30) were used during the Soviet-Finnish war, one tool was lost. In the Red Army in June 41 of the year there were 37 Br-2 (according to other data - 38), the troops also had 28 guns, which were part of the heavy cannon regiment of RVGK and 2-x separate batteries, which were located in the Arkhangelsk military district and used for coastal defense. The rest were in landfills and warehouses. They were mostly experienced guns and cannons, having a fine cut. Little is known about the combat use of Br-2, in particular, there is information about their use during the Battle of Kursk. These guns were also in service with the artillery group of the Eighth Guards Army in April, the guns were used during the Berlin offensive operation to hit targets at Seelow heights. During 1945, 1944 shots were fired at the Br-9900 cannon (on the Leningrad (2 shots), First Baltic and Second Belorussian fronts), in 7100, 45 shots, shells consumption for guns data in 3036 m-42 X-NUMX was fixed. Probably, during the Second World War the guns of this type did not suffer losses, since as of 43 in May 1, there were the same number of guns in parts of the RVGK as at the beginning of the war, that is, 45 guns. This fact is primarily associated with the cautious use of guns of this type, as well as timely evacuation from the western regions of the USSR to the rear in 28.

The Br-2 gun, however, like other high-powered guns, is rather difficult to recognize as a successful model. This is largely due to the lack of experience of the young design school of the USSR, which took one of the leading positions only at the end of the 30-x - the beginning of the 40-x. During the long path of development, not the most successful samples were created, and borrowing of foreign experience was widely used. Designing high-powered guns, due to the high complexity, was particularly difficult compared to other classes of artillery systems. The lack of experience in this field, as well as the weak use of the developments of other countries, created significant obstacles for Soviet designers. The main problem of the Br-2 was a tracked carriage. The design of the mast was conceived as providing patency during movement on arable land or virgin soil, which in theory increased the survivability of the gun due to the rapid change of the firing position of the gun without disassembly. In reality, the use of a tracked gun carriage caused the bulkiness and low mobility of the system, not only unassembled, but also disassembled. The ability to maneuver with fire was strongly limited by the angle of horizontal guidance, which was only 8 °. It took more than 25 minutes to rotate the gun beyond the horizontal guidance angle. The survivability and mobility of the system did not contribute either to the need for disassembling the cannon on the march, as well as a separate barrel wagon. The tool moved with difficulty even when using the most powerful domestic tractors. In conditions of poor permeability (ice or thaw), this system almost completely lost mobility. Br-2 thus had poor maneuverability in all respects.

Among other shortcomings should be noted low rate of fire. Despite upgrades, barrel survivability also remained low. The haste with the launch into mass production of an insufficiently tested system was the reason that the small artillery system was divided into two series, which differed in the ammunition used and the cutting of the barrel.

Problems with high-power tools of domestic production became the reason that the country's leadership decided to take a tried and tested path - the use of advanced foreign experience. With the company "Skoda" in 1938, we entered into an agreement for the supply of prototypes and those. documentation for two powerful artillery systems - the 210-millimeter cannon and the 305-millimeter howitzer, which in production were designated as Br-17 and Br-18. The main problem of cannon heavy artillery of the USSR was the small number of issued guns. As of June 41, the Red Army had only 37 — 38 Cannon Br-2, including poorly combat-able guns, which had fine-cut and ground test samples, as well as 9 Cannon Br-17, which had no ammunition at the beginning of the war. 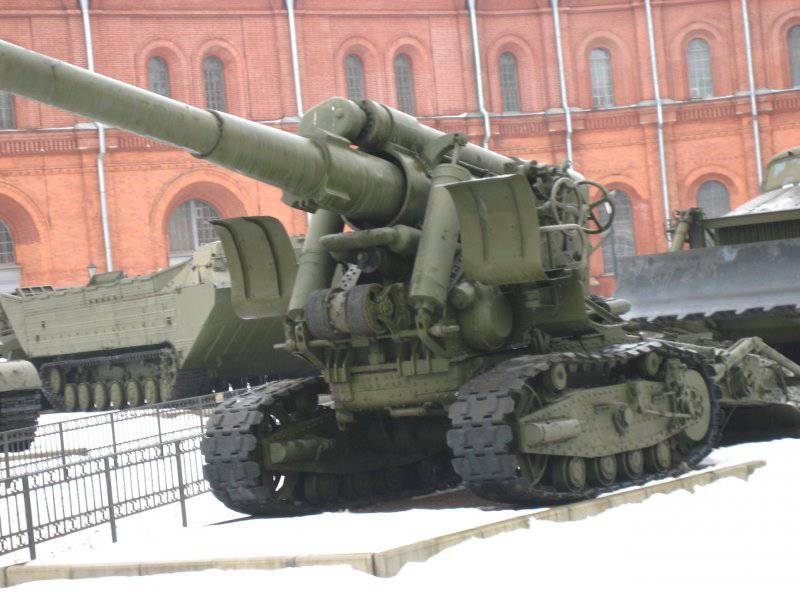 For comparison, the Wehrmacht had several types of 150-millimeter high-power cannons - X. NUMX X. NUMX guns, more SKN / 28 16 guns, more K. 45 28 guns, and K. 101 18 guns. All of them were highly mobile artillery systems on a wheel course with powerful ballistics. For example, the K.53 39-mm cannon had the following tactical and technical characteristics: the traveling mass — 150 kg, the combat weight — 18 kg, the horizontal guidance angle on the platform — 18310 °, with the legs spread apart — 12930 °, the rate of fire — 360 shot per minute , the maximum firing range is 11 m. From this it is seen that the German K.2, with the same firing range as the Soviet Br-24740, significantly exceeded its other parameters. In addition, the German guns had a significantly larger assortment of ammunition, which included three types of high-explosive fragmentation projectiles: armor-piercing, semi-armor-piercing, and concrete-breaking projectiles. The only advantage of the Br-18 is a more powerful high-explosive fragmentation projectile that contained more explosives per kilogram than the foreign counterparts. Even heavier 2 millimeter cannons on the K.2 Mrs.Laf carriage. (in 1 — 170, 18 units were fired), who fired 41-kg by a projectile a distance of 45 m, surpassed Br-338 in mobility.

Also interesting are the comparison of the characteristics of the Br-2 cannon with the heavy 155-mm gun M1 "Long Volume" (USA). This gun, like Br-2, was developed in the middle of the 30-s. Barrel length - 45 caliber, muzzle velocity - 853 m / s. Despite the fact that the American M1 was inferior to the Br-2 in the maximum range of fire on 1800 m (23200 m against 25000 m), its mass in the stowed position was 13,9 t, which is almost 4,5 t. Less than the combat weight of the gun Br-2. In addition, "Long Tom" was mounted on a wheeled carriage, which has a special design with sliding beds. The wheels of the gun carriage rose when fired, while the support served as a special. platform that fell to the ground. Compared with the tracked gun carriage of the Br-2 cannon that rolls back when firing backwards, this made it possible to significantly win the accuracy of fire. The sector of horizontal guidance М1 was 60 °, which also provided an advantage. The mobility of the US-made 155-millimeter cannon, along with high firing accuracy and the presence of powerful tractors, puts the Br-2 at a disadvantage even despite the shorter firing range of the Long Tom. 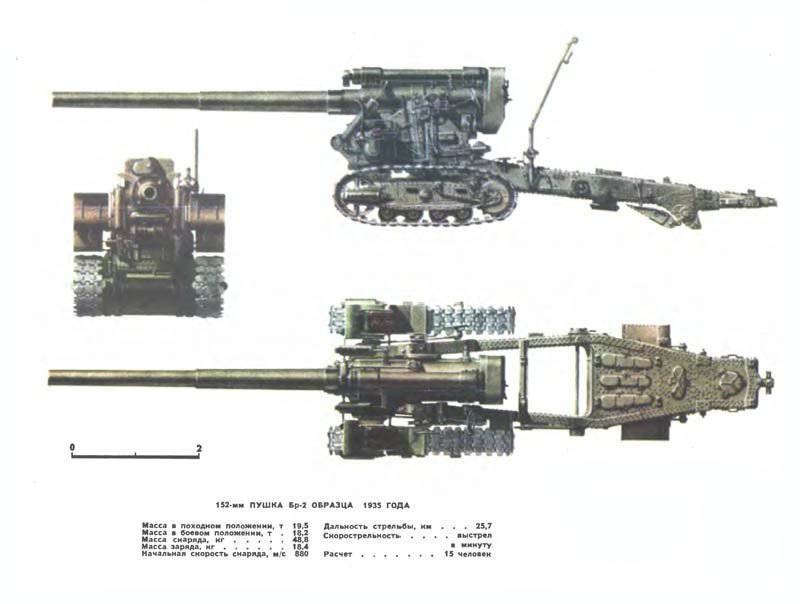