The pacification of Hungary

July 24 2019
45
Hungarian trekking Russia in the 1849 year saved its mortal enemy. Russian blood was saved the Habsburg empire. It is obvious that St. Petersburg did not have to interfere in the completely natural collapse of the Austrian “patchwork” empire. On the contrary, it was necessary to extract political benefits from this event. 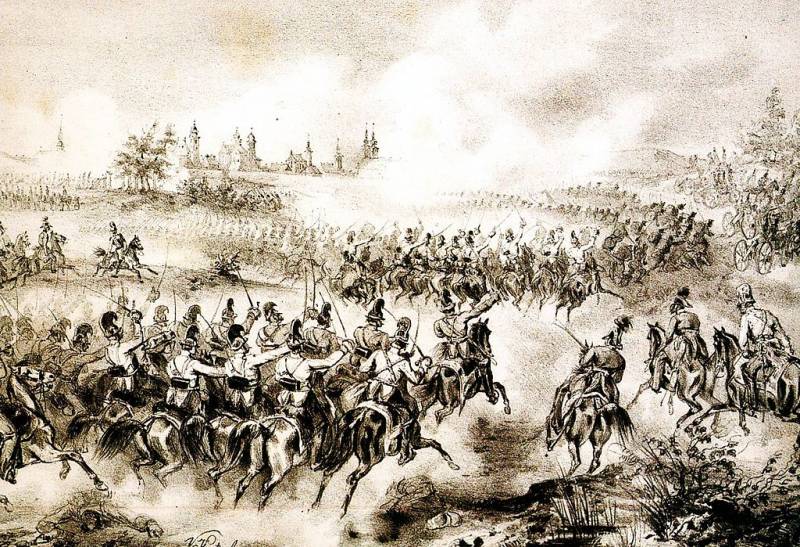 The rout and surrender of the Hungarians

The main forces of Gergei slipped away again. The Hungarian commander-in-chief of the rapid marches moved to Banat, on the way he strengthened part of Bema's forces from Transylvania. The Hungarians entered Oradea (Grosvardein) on July 27 (August 8). Gergey planned to combine his forces with the army of Dembinsky, but he retreated to the north, instead of joining the main army.

Meanwhile, after the departure of the main army of the Hungarians from Comorna, the Austrians began to move and 12 (24) July occupied Pest. The Hungarian government fled to Segedin. The Austrian army of Gainau also moved south to free Temeshvar from the siege and join up with Yelačić’s forces. July 23 (August 3) The Austrians occupied Segedin and July 25 (August 5) defeated the Southern Army of Dembinsky under it. Hungarians retreated to Temeshvar.

In place of Dembinsky, Behm was urgently called in from Transylvania. Also, the Hungarian army was reinforced by the division of Kmet, who came from the south. The Hungarian army numbered about 50 thousand people with 120 guns, the Austrian - about 90 thousand people with 350 guns. However, a significant part of the Austrian army defended Arad in order to prevent Bemu from uniting with the Gergei army. Therefore, the Austrians did not have a numerical advantage, but their troops were better in quality than the Hungarians (mainly the militia). July 29 (August 9) Bema's army was crushed. Panyutin's division played a decisive role in this battle. The losses of the Austro-Russian troops - about 5 thousand people, Hungarians - about 10,5 thousand people and almost all the artillery. In the following days, thousands of Hungarian rebels from the scattered Southern Army surrendered. The remnants of the Hungarian army fled to Transylvania or to the Turkish possessions.

Thus, the army of Gergei was in a bind. Hungarians were defeated near Debrychin, they were pursued by Russian troops. It turned out a huge superiority of Russian, which caused the decomposition of the Hungarian troops. The militia began to run home. At Arad, where Gergey hoped to join forces with Bem, Schlik's Austrian corps stood, blocking the road to Temeshwar. The southern army was crushed and scattered. Gergey decided that further resistance was meaningless, and decided to surrender to the Russians. The Hungarians despised the Austrians; moreover, they knew that they would be treated as traitors. 1 (13) of August under Vilagoshe the Hungarian army - more than 30 thousand people with 60 flags and standards and 144 guns led by Gergei surrendered to General Reediger. 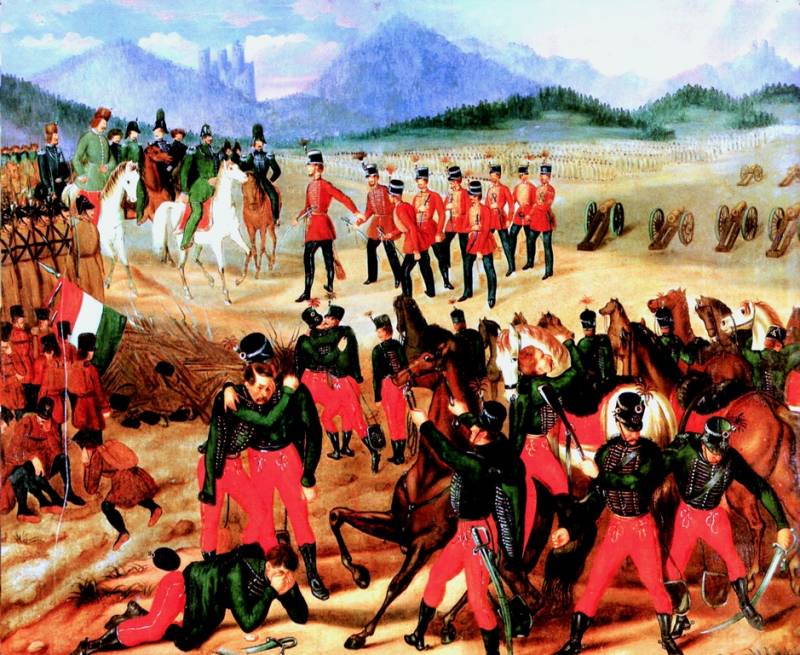 The suppression of the rebellion in Transylvania

The army of Polish General Bem was located in Transylvania - 32 thousand people with 110 guns. These were mainly militia from the Hungarian tribe of the Sekler (Skei). The rebels controlled the whole country, only the Austrians sat in the fortress of Karlsburg. The weak Austrian corps of Count Clamg-Galas retreated beyond the border line into West Wallachia.

Transylvania from the rebels had to clear the 5 Corps of Leaders - 35 thousand people. Russian troops were divided into groups. The northern group, led by General Grotengelma, part of the 10 and 13 infantry divisions (10,5 thousand people with 24 guns), was concentrated in Bukovina near Dorn-Vatra and was to advance in the general direction from the north-east to the south-west. . The southern group of Liders itself - 14-I and 15-I infantry divisions (25 thousand people, 56 guns), was located in Wallachia at Predel and had to strike from south to north, to force the main ridge of the Transylvanian Carpathians. Both Russian groups had to enter Transylvania, to unite. The Austrian corps of Clam-Galas (about 10 thousand people), which made up the left flank of the southern group, was subordinated to Liders.

6 (18) June 1849 The Liders troops were concentrated on the border of Transylvania at Predeal. It was decided to deliver the main blow through the Temeshsky gorge to Kronstadt (Brasov). 7 (19) June Liders personally led the troops, shot down the enemy barrier, 8-th with the battle overcame the Temeshsky gorge and took Kronstadt. The strong Hungarian position has fallen. Hungarians lost 550 people killed and captured, 1 banner and 5 guns. Our losses are 126 people. 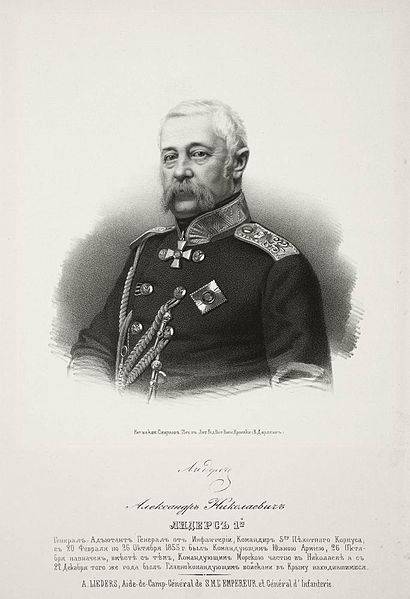 The commander of the 5 Corps, Alexander Nikolaevich Liders 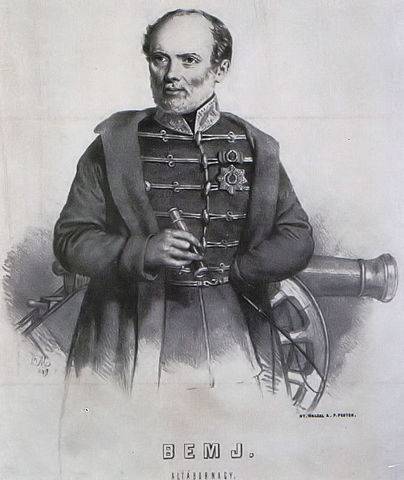 After finding out the situation and giving rest to the troops, Liders continued the offensive and on June 23 (July 2) defeated the Hungarian corps Gal Shandora and Georgi on Chik Sereda. 1 (13) July Engelhardt vanguard with a sudden attack seized the fortress of Fogarash. It was taken to 800 prisoners and 4 guns. Having defeated the opposing forces of the enemy, the corps of Liders 9 (21) of July took Sibiu (Hermanstadt). Meanwhile, the Northern Group of General Grotengelm 7 (19) June began a slow movement from Dorno Vatra. 15 (27) June Russian troops attacked Bema's corps, which was located on the Bukovina direction. The Hungarian attack was repelled. Bem did not dare to a new attack and retreated. The northern group passed Bystritsa, occupied Sas Regen. Energetic Bem, having put up barriers against the detachment of Grotengelm and Liders, at that time made a foray into Moldova, in order to raise a rebellion in the rear of the Russian army. However, his hopes were not justified, the locals did not even think of rebelling. Bemu had to return to Transylvania.

14 (26) July Liders continued the offensive and launched from Sibiu (Germanstadt) on Segeshwar. In Sibiu, a detachment of General Gasford was left - 4 thousand people with 12 guns. 19 (31) July, the battle of Segeshwar took place. Bem attacked the corps of Liders, but was crushed. Russian losses - 258 man, Hungarian - 1700 man, 8 guns. On July 22 (August 3), the Liders forces established contact with the Northern Group of the Grotengelm. Learning about the departure of Liders with most of the forces, the Hungarian Stein Corps (3,5 thousand) tried to recapture Sibiu. On July 20, the Hungarians were defeated by Gasford at Koelneck. Hungarians have lost 1200 people, mostly prisoners, 2 flags and 2 guns. Our losses are 64 man.

Broken Bem has not yet lost hope of success. He led another squad and rushed to Sibiu (Germanstadt) to smash Gasford's squad. Learning about Bema’s march on Sibiu, he rushed to the aid of his rear unit. Our troops marched in a forced march for three days 150 versts along mountain paths and scorching heat conditions and were on time. July 25 (August 6) Sibiu had the last decisive battle. Gasford, cramped by the wagons of the entire 5 corps, lasted a whole day - July 24. On this day, our troops lost 351 man. The next day, on July 25, the Liders squad entered the battle. Hungarians were defeated, losing only prisoners 1 thousand people and 14 guns. July 30 (August 11) Liders at Mullenbach dispersed the last remaining 8-th of the Hungarians Stein's body. Hungarian losses - over 2,2 thousand people and 13 guns. Our losses are minor - 39 people.

Thus, Behma's Transylvanian army ceased to exist. Her remnants laid down weaponwhen we received news of the Vyagosha capitulation of the army of Gergei. Bem himself was summoned to Hungary to lead the Southern Army, suffered a new defeat at Temesvár and fled to the Ottoman Empire. In Turkey, Bem accepted Islam and worked on the modernization of the Ottoman army. After the capitulation of the rebels in Transylvania, the main forces of the Liders corps returned to Wallachia.

After the news of the defeat and surrender of the Hungarian armies, the garrison of Comornos under the command of Klapki, who had been very successful in restraining the Austrians, capitulated on September 21 — 23 on honorable terms. This was the end of the Hungarian uprising. 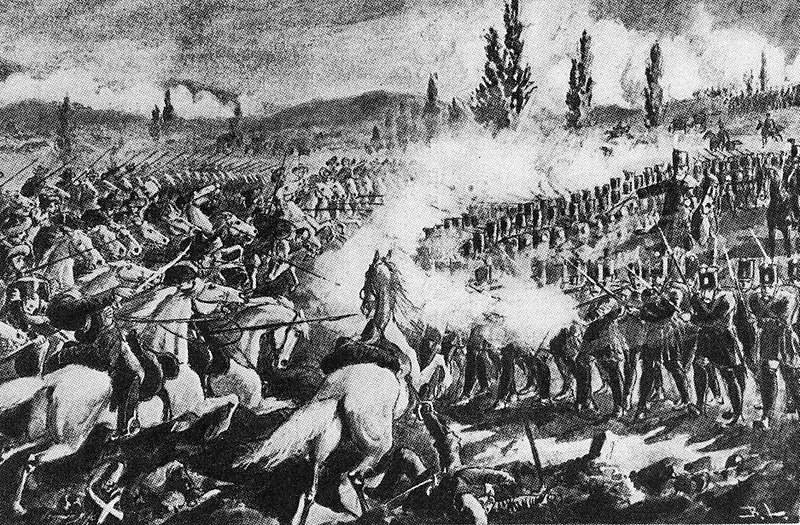 About 170 thousand Russian soldiers and officers took part in the Hungarian campaign. Combat losses were insignificant - over 3 thousand people, about 11 - 13 thousand people died from diseases (and the incidence was half the army - 85 thousand people). Material expenses amounted to 47,5 million rubles.

The Hungarians showed themselves as brave warriors, but on the whole they were the militia, not regular troops. They were able to beat the bewildered Austrians, but could not withstand the Russian military machine. The Hungarian command made a number of mistakes, having failed to establish relations between the northern and southern theaters, to apply a maneuver along the internal operational lines. The situation was worsened by the conflict between the Hungarian dictator Kossuth and the army commander Gergey. The problems were in the command of the Hungarian army. So, prominent positions were taken by former Polish generals, leaders of the 1830 uprising of the year. Bem proved himself an energetic commander in Transylvania. Gyorgei was also a talented commander. His flank march from Weizen to Debrechin was a brilliant, exemplary way out of the trap.

Paskevich in this campaign proved to be not the best way. In the wars with the Persians and the Turks, he fought much better. The Hungarian campaign was carried out mediocre. Being in charge of 100-th. the army, having a quantitative and qualitative superiority, the prince of Warsaw could not overtake and defeat the enemy. Paskevich overestimated the forces of the enemy, was late, did not use powerful cavalry. The Russian army could not give a single general battle. The best qualities of Russian military leaders showed Reediger, Liders and Panyutin.

In general, the Hungarian campaign showed the decay that had begun, the lag of the Russian army, which by inertia was the best in the world. With each new war - in the Crimea, in the Balkans, in Manchuria, these problems will become more and more pronounced. And everything will end in a catastrophe of the First World War. In particular, initiative, independence, and the Suvorov offensive spirit were expelled from the army. Among the generals in the first place were careerists, sycophants. These combat commanders were ousted, did not give the road. Window dressing reigned in the training of troops, which had nothing to do with real combat operations. As a result, the army, which defeated the "invincible" Napoleon, gradually lost the ability to fight, and did not prepare for war, resting on old laurels. The results will be sad - Russian wash their hands with blood in Sevastopol, during the liberation of Bulgaria, the Japanese campaign.

In general, the army completed its task - Hungary was pacified in the shortest possible time. But the lessons from the campaign did not. And in the military-strategic sense, the Hungarian campaign was not only useless, but erroneous. The Hungarians hated Russia and carried this hatred before the First World War, when the Magyar regiments clashed with the Russians again. During the life of Nicholas I, Russia experienced the “Austrian gratitude”. The hostile position of Vienna, which was ready to start a war with Russia, led to the defeat in the Crimean War. The position of Austria did not allow Russia to get all the fruits of the victory over the Ottoman Empire in 1878 year. Austria-Hungary prevented Russia from dominating the Balkans and became our enemy in 1914.

Thus, Russia in the 1849 year saved its mortal enemy. Russian blood was saved the Habsburg empire. It is obvious that St. Petersburg did not have to interfere in the completely natural collapse of the Austrian “patchwork” empire. On the contrary, it was necessary to extract political benefits from this event. So, it was possible to get the neighboring friendly Hungary, whose existence would depend on the goodwill of Russia. To establish control over the Slavic regions of the Habsburg Empire. Return the indigenous Russian lands - Galicia, Carpathian Rus (these tasks were set only in the First World War).

Author:
Alexander Samsonov
Articles from this series:
Hungarian trekking How the Russians saved the Habsburg Empire

Ctrl Enter
Noticed oshЫbku Highlight text and press. Ctrl + Enter
We are
Hungarian trekking How the Russians saved the Habsburg EmpireIntervention or peacekeeping?
45 comments
Information
Dear reader, to leave comments on the publication, you must to register.