July 4 2012
2
After the end of the Second World War in KB-2 increased the amount of work to create a new small weapons. In 1946, GAU was approved by TTT No. 3230 for a single machine gun designed to replace the Maxim and SG-43. Already in 1947, the factory and ground testing of the machine gun corresponding to these requirements, developed in KB-2 by the designer G.S. Garanin. In the automatic machine gun was implemented the principle of removal of powder gases through the hole in the wall of the fixed barrel. The barrel bore was locked by means of two lugs of the butterfly valve. Food was carried out from a metal tape of open type with direct submission. The machine gun for testing presented in three versions: on the wheel and tripod machines, on the bipod. 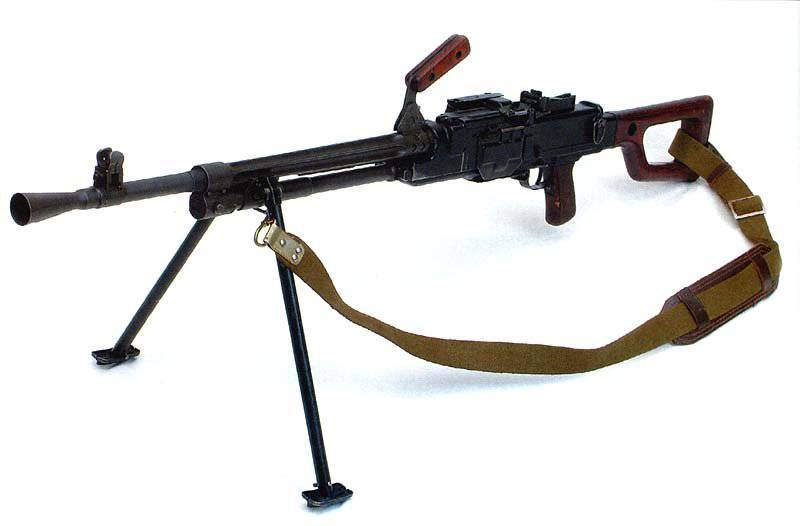 The testing ground of the NPSVO machine gun test results gave Garanin a negative conclusion, but despite the failure, the idea did not disappear. But although the topic was not closed, the work on creating a single machine gun was nevertheless postponed indefinitely. This idea came back a few years later. For example, in 1953, the Tula designer GI Nikitin, on his own initiative, began to develop his system of a single machine gun for an 7,62-millimeter rifle cartridge. But it was officially approved only after 31 of December 1955 of the year approved the tactical and technical requirements of GAU for the "7,62-mm battalion and single rotary machine gun for rifle cartridges." Nikitin created several prototypes. In addition to Grigory Ivanovich, a young engineer Yu.M. Sokolov, who came to 1954 in the CDB-14 after graduating from the Tula Mechanical Institute. Sokolov proved himself as a capable designer who was actively involved in solving a number of issues - on the arrangement of the receiver, barrel, butt, trigger and machine tool. This was the start of the creative collaboration of Sokolov and Nikitin. 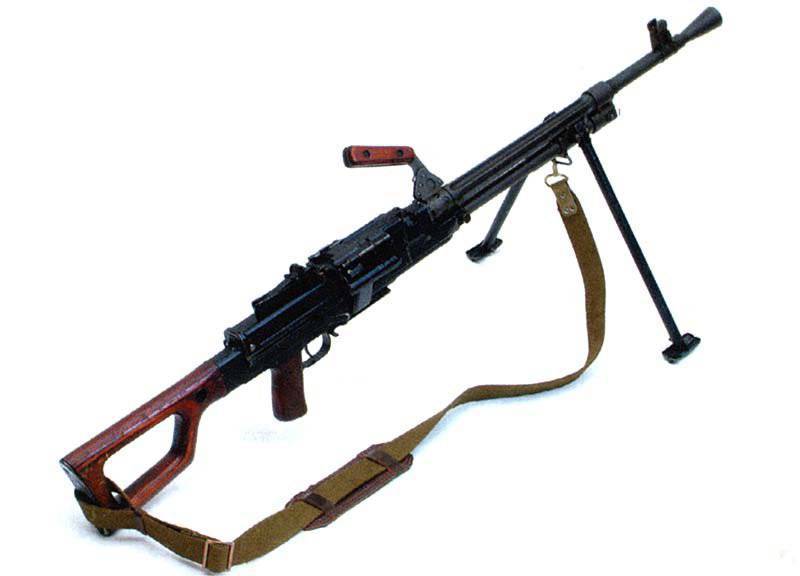 In the automation of the single machine gun of Nikitin-Sokolov, the principle of withdrawal from the barrel of a part of the powder gases with their “cut-off” was implemented, as was implemented in the machine gun SG-43. Locking was carried out when turning the bolt slot on the bolt carrier. Food was carried out from a metal strip specials. 100 or 200 capacity direct feed cartridges. The feed mechanism was performed in the form of a lever having feed fingers, which was set in motion by a bevel of the slide frame. From the recoil-fighting spring worked percussion mechanism. The machine gun used a new system for cutting off powder gases, which ensured optimal discharge from the bore of the powder gases and their impact on a significant part of the movement of the bolt carrier.

Factory as well as ground tests of the 7,52-mm single (battalion and company) light machine gun Nikitin-Sokolov were conducted in the 1956 year. Other uniform light machine guns took part in the competition, among which were machine guns of Silin-Pererushev and Garanin designs. As a result of the tests, the Nikitin-Sokolov system was recommended for further refinement, with the finalization of the competitors' machine guns deemed inexpedient. In the test report it was noted: “... The machine gun of the Garanin design does not meet the tactical and technical requirements for accuracy of combat. In terms of reliability of operation with wiped dusty, dry parts and firing without cleaning for 5-days, the Garanin TTT machine gun did not satisfy and is inferior to the Nikitin-Sokolov system. ” The Silin-Pererusheva machine gun did not pass the test due to the large number of transverse liner ruptures. 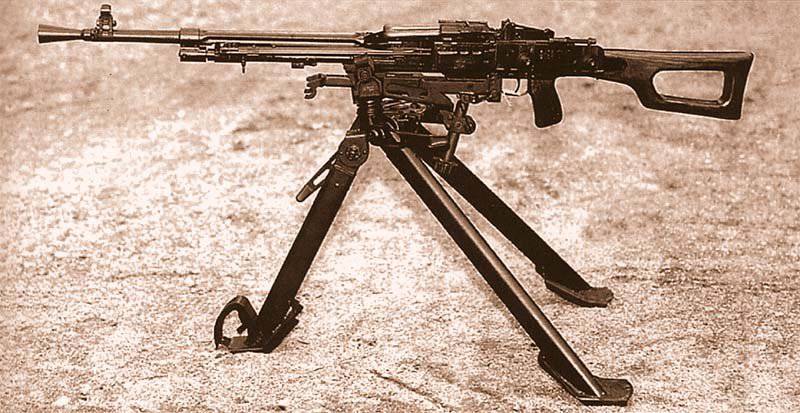 In 1958, the Nikitin-Sokolov machine gun mounted on an ES machine. Samozhenkova, successfully passed the ground tests. Based on their results, the State Agrarian University decides to manufacture a batch of these machine guns for conducting troop tests, and then start mass production at the Kovrov Mechanical Plant. The sample Nikitin-Sokolov had a lot of advantages. However, there were disadvantages that were identified during the tests. One of the "features" of the machine gun by the representatives of the main customer was marked as inadmissible during combat use. If, after shooting, the machine gun was in the water, like two or three shots after that went exclusively single fire. After a single shot, the shooter needed to reload the weapon, i.e., two or three times manually set the machine gun on a combat platoon. The developers did not attach much importance to this delay. Representatives of the State Agrarian University asked to eliminate it as soon as possible. It was then that the GAU decided to connect the Tula Design Bureau to the development of the system.

However, the future prospects of a single machine gun created in Tula were not so bright. Parallel troop testing samples Kalashnikov and Nikitin-Sokolov had to finally decide the fate of a single machine gun. These tests took place at the end of the 60-s in the officer course "Shot" in the Central Asian and Baltic military districts. Both systems showed good results and were almost equivalent.

M.T. Kalashnikov about these tests left the following memories: “The representative of the design office competing with us began to noticeably nervous. Repeat the lock in the arych water. And again they began to "sneeze" samples, and we have a normal automatic shooting. According to the test conditions, machine gun fire was conducted as follows: first, there were short lines in the 3-4 shot, then several long lines on the 10-12 shots. During the long queue, our competitors had a delay due to tape overlap. Then another similar delay. True, they soon ceased, and the shooting went well. After some time, quite unexpectedly, a commission that conducted the tests met at an extraordinary meeting. As it turned out, the representatives of the design bureau competing with us went to the trick: in order to avoid overlapping, they warned all the shooters - for long queues to give 10 shots. The officer, a member of the commission, noticed this maneuver and made sure that everything went according to the test conditions. After that, several instances were delayed due to tape overlap. The very fact of an attempt by a design representative to facilitate the established rules was evaluated by the commission very harshly. And then there was another event. Because of the strong recoil, one of the soldiers hurt his cheekbone. It turned out that the cut-off of gas, which provided an improved effect on the large way of moving the frame, if the soldier did not fix the weapon in a certain position during the shooting, had a negative factor. The recoil came to the bolt with a rather large pressure and was transferred to the butt, which was beating at the same time into the cheekbone. If the shooter in a calm atmosphere could press the butt more comfortably and curb the recoil, then during the battle there will be no time to choose such a position and inevitably a face trauma will follow. ”

As a result, on one side of the scale there was a successful design of the technologically advanced and easy-to-manufacture machine gun of the Nikitin-Sokolov system, even if it had small, completely uncorrected flaws, on the other - the Kalashnikov design, which proved to be highly reliable in similar models of machine guns and light machine guns, which guaranteed high operational fighting qualities. In this regard, GAU chose a single Kalashnikov machine gun, as more simple to maintain and more reliable in operation, especially during rain and overcoming water obstacles. In 1961, the 7,62 mm Kalashnikov single machine gun was adopted. In the future, this machine gun was put on mass production instead of the Nikitin-Sokolov machine gun.